Planning a visit to Athens? Don’t miss a chance to take an Athens to Meteora side trip. It’s well worth a visit and even an overnight rather than a rushed day trip. Here’s why!

Arriving in Meteora Greece by Train

When our train pulled into Meteora Greece our jaws hit the ground. It’s one of those places that looks gorgeous in pictures, but is a completely different experience when you see it yourself.

The sheer magnitude of the rock cliffs and numerous pillars rising above the town of Meteora gives you a similar feeling to standing in the middle of Yosemite National Park, with its giant cliffs of granite surrounding you. 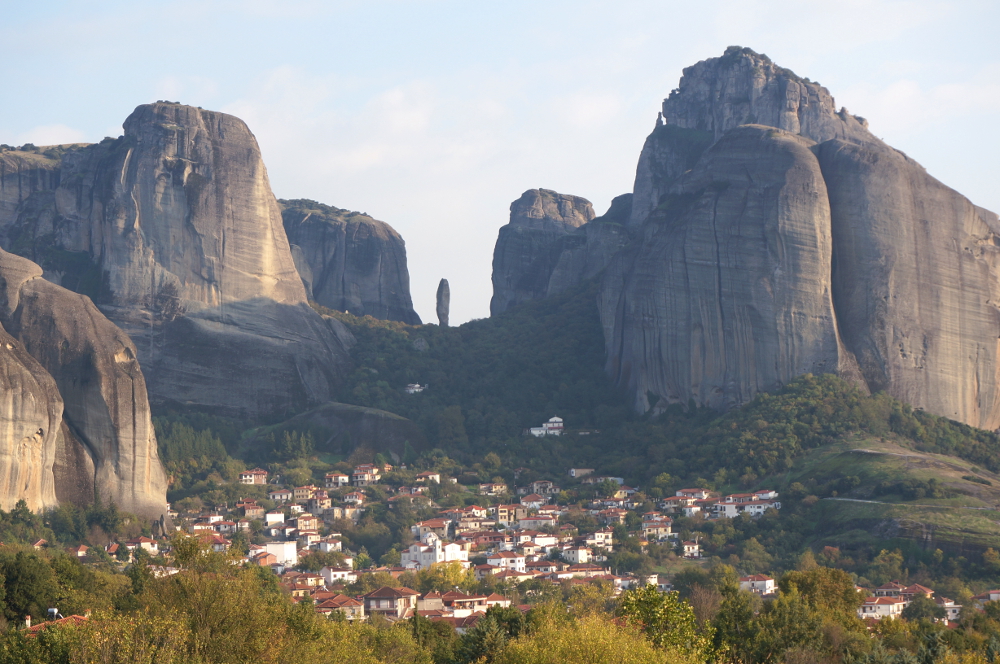 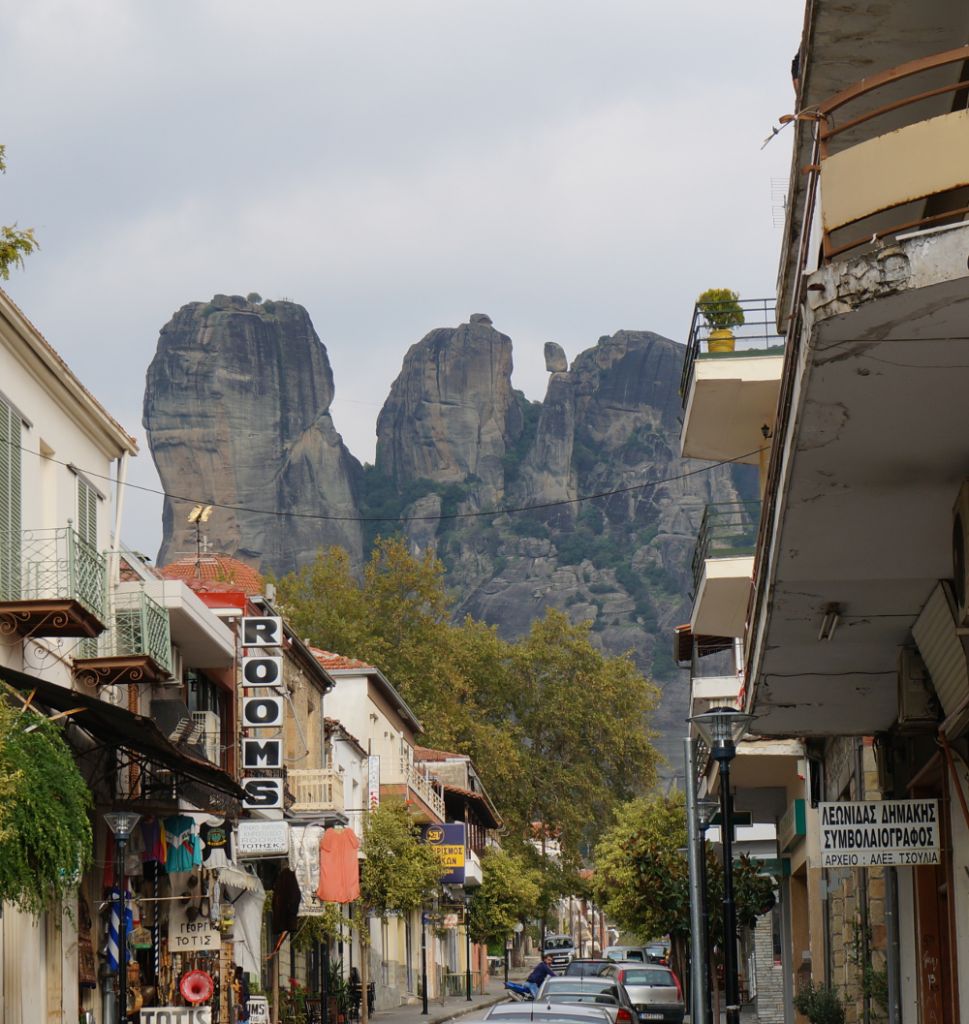 We were invited to come to Meteora by George of Visit Meteora. George laughed when we gave him the Yosemite analogy – apparently we weren’t the first ones with this observation.

He and some members of his family recently began a tour company and are striving to help visitors really experience Meteora by visiting for a few days (rather than seeing it from the window of a tour bus).

After spending a few days in Meteora we agree, just driving through would be a shame.

Meteora is best known for the stunning monasteries perched impossibly on top of huge rock pillars. Quite an unforgettable sight. 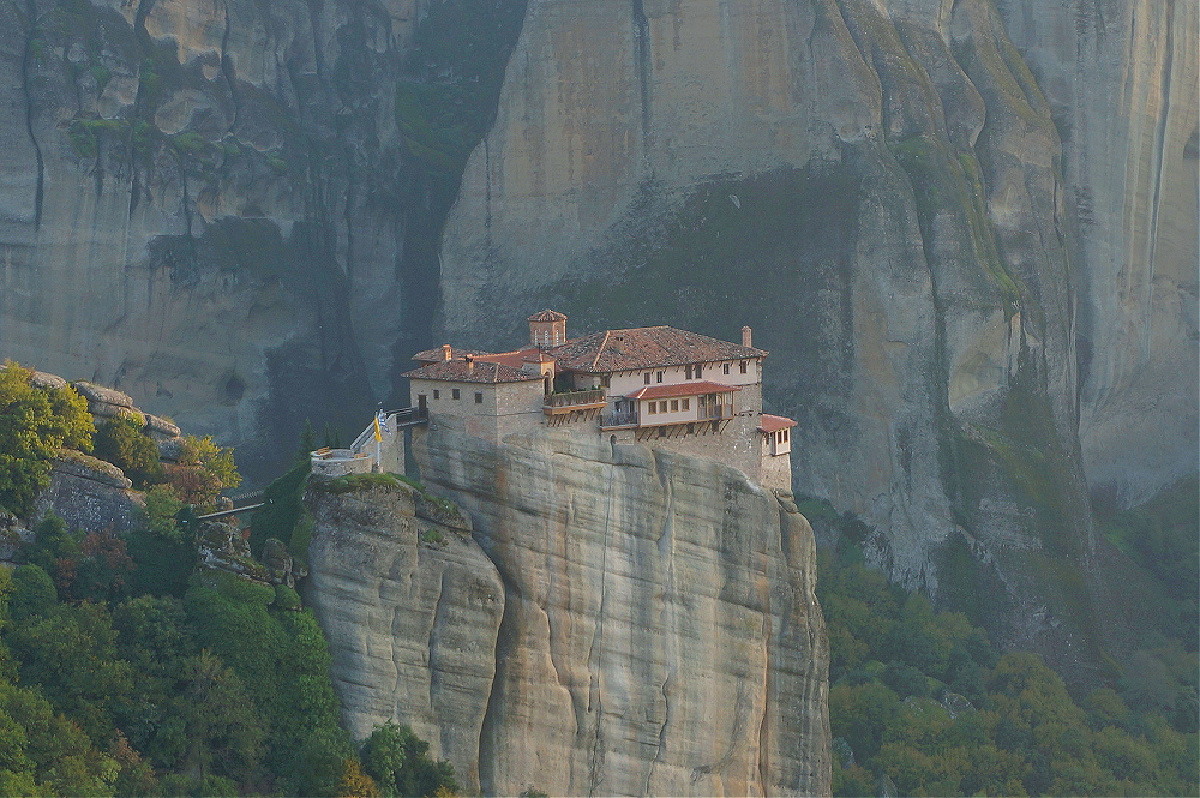 We began our trip by traveling up in the mountains to see the sunset from above the town. Along the way we passed by numerous caves that the wind as carved into the stone pillars over a period of thousands of years.

George pointed out several along the way. One, he explained, was used as a kind of monk “time-out” bunker. For any number of infractions a monk could be sent to climb into the cave and remain until he had served his time.

This could last from anywhere from days to, gulp, YEARS…. 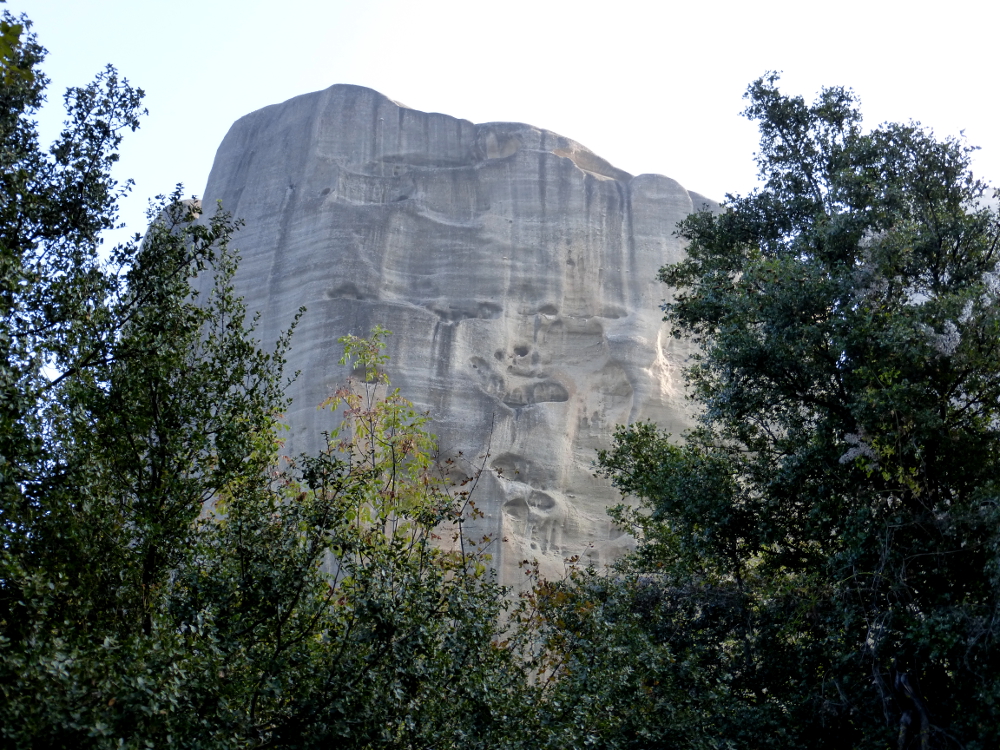 Another cave was decorated by brightly colored scarves. This was accomplished by having climbers ascend and put fresh scarves in the cave each year.

Legend has it that a Muslim woman offered her headscarf  to Saint George at the urging of local Christian townspeople after her husband had been critically injured below the cave.

Beyond all hope her husband had a full recovery, which was deemed a miracle. Locals replace the scarves each year as an offering to Saint George for health throughout the year. 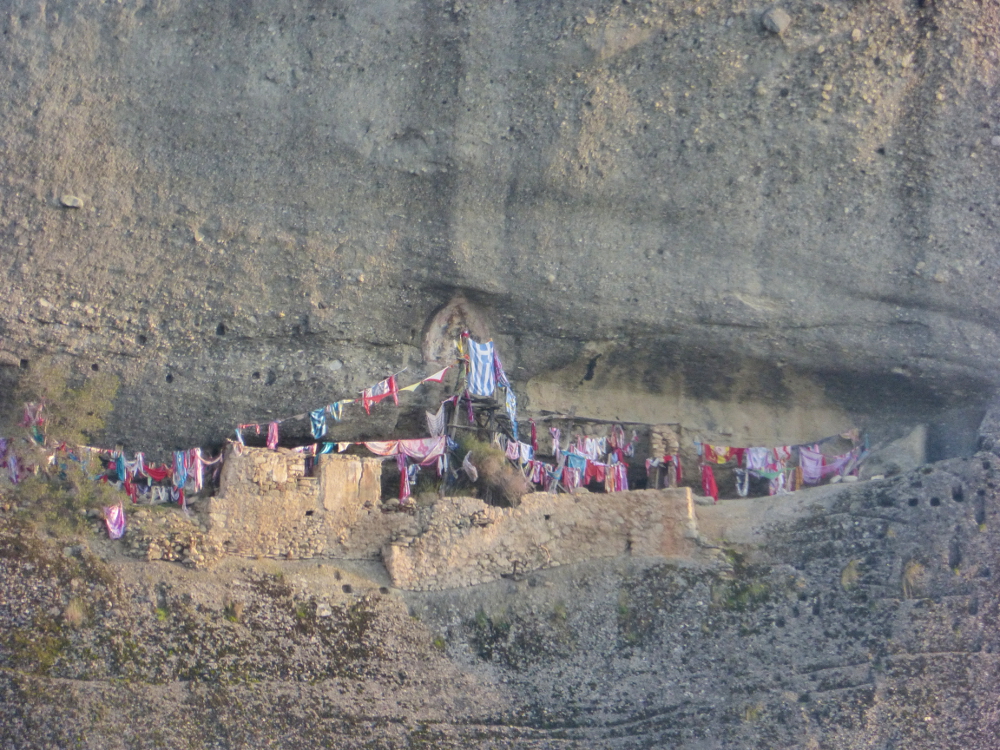 Both the sunset and the views of Meteora were breathtaking. 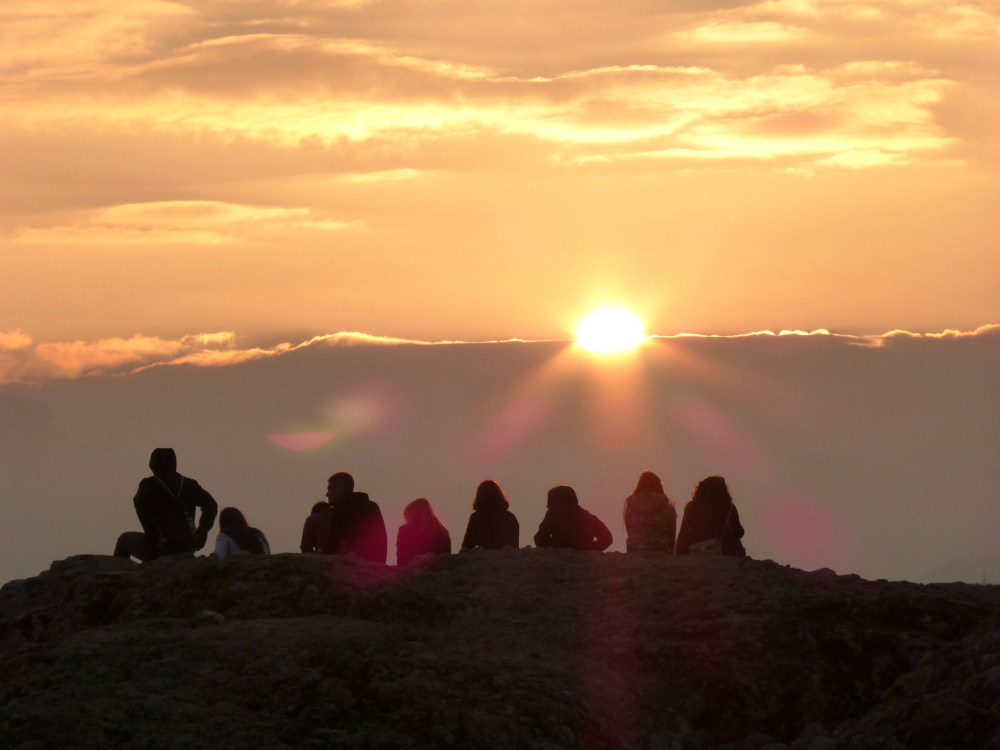 The next day we hiked to several of the monasteries. As luck would have it this occurred on a Sunday, so we were treated to the echoing sound of monks singing hymns along the way. 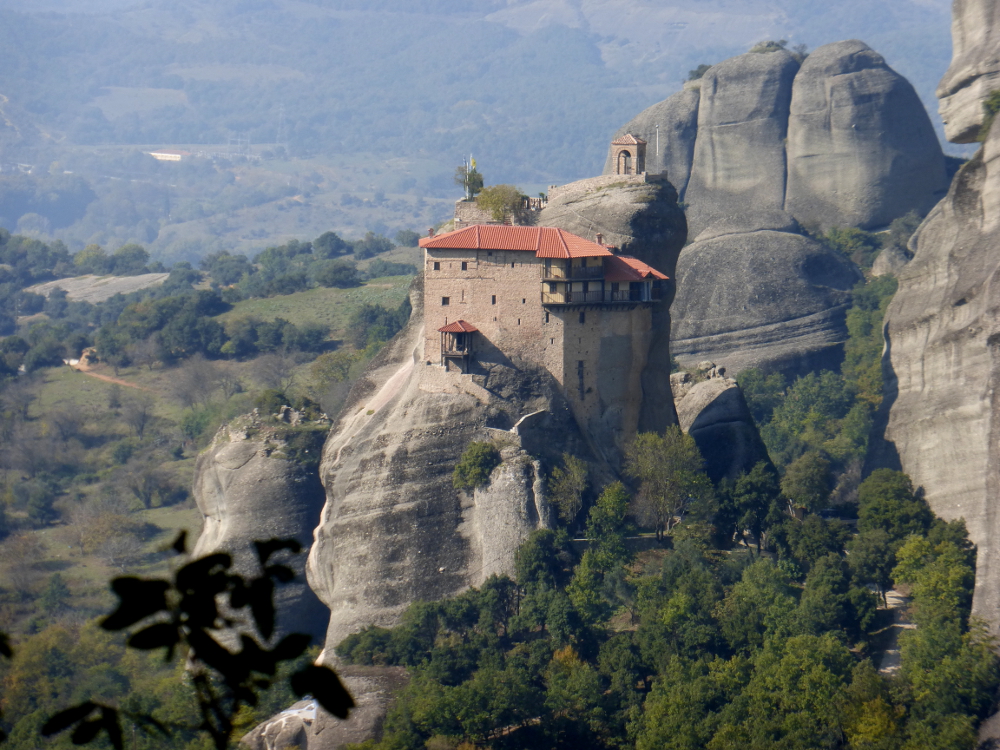 Meteora Monastery Perched on a Pillar of Stone

George, who is native to Meteora, gave us a brief history of the region along the way. First obvious question – how were those pillars formed? According to geologists the land was at one point completely underwater. Changes in the waterflow, most likely the result of earthquakes, caused the area to dry.

Flooding over the years added new rock layers that were revealed when wind carved away looser rock leaving the hard packed pillar shaped sediment behind. A close up view of the rock shows a texture similar to cement made of smooth rounds stones typical of river rock. 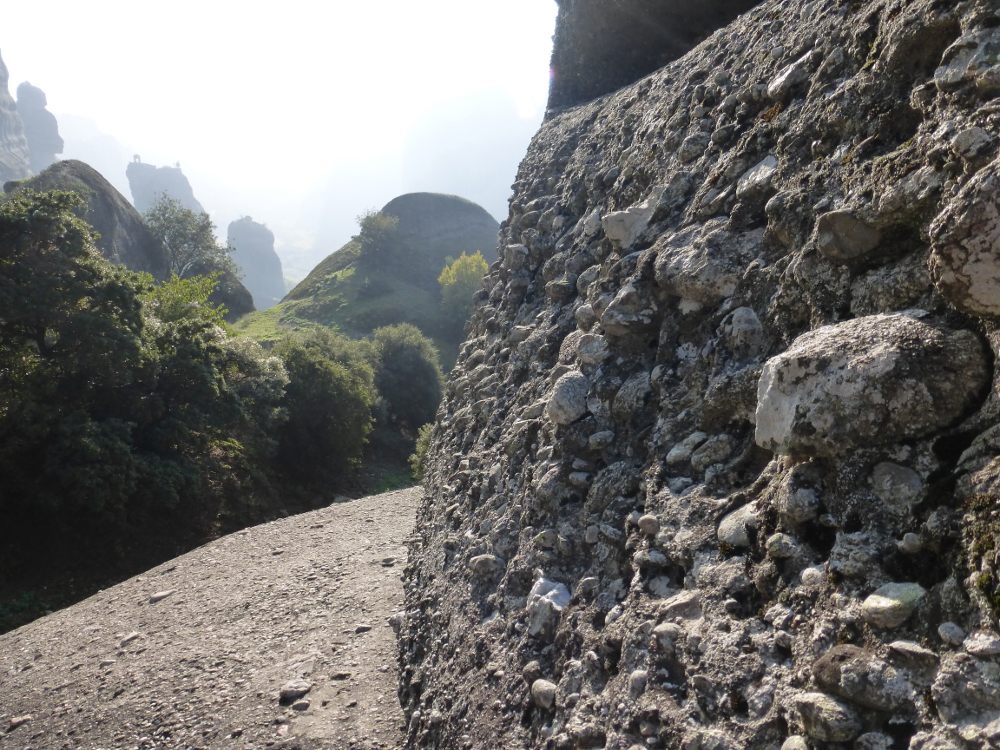 That mystery solved, the next question is why would the monks chose to make the top of these vertigo inducing structures their homes?

At one point the area was actually home to 24 monasteries and now only six (4 monasteries, 2 convents) remain. George patiently explained that there were several reasons:

1. Security – In order to build on these pillars the monks had to first scale the rock freestyle. When ropes and ladders were installed (and later removed to prevent intruders) they were able to haul up rocks in order to build their places of study and worship.

The nearly impenetrable ground allowed them to protect themselves as well as the artifacts that they collected to attract additional followers from pirates and pesky hoarding Turkish invaders. 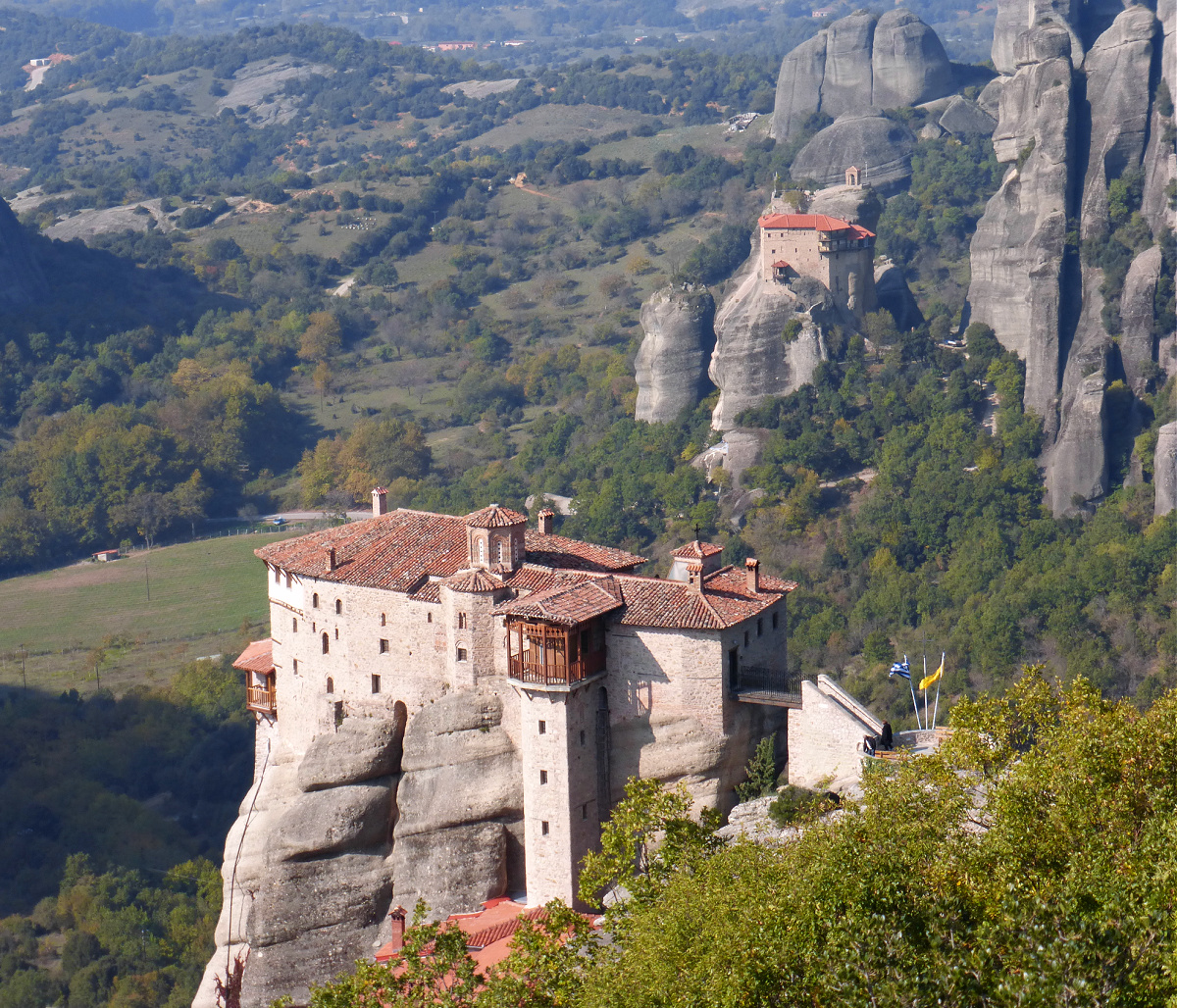 2. Seclusion – The monks needed a place where they could remove themselves from the general population and all of its inherent temptations in order to live, well, the life of a monk. 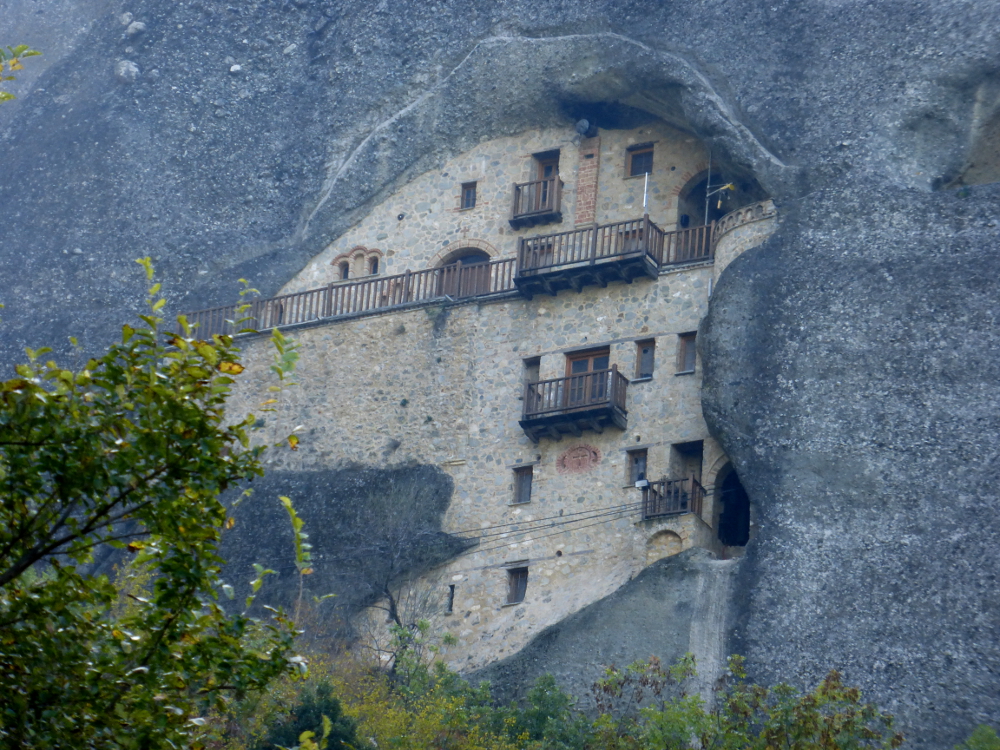 On the second day we continued our tour of the monasteries along with viewing some caves where Monks had chosen to live out their lives. 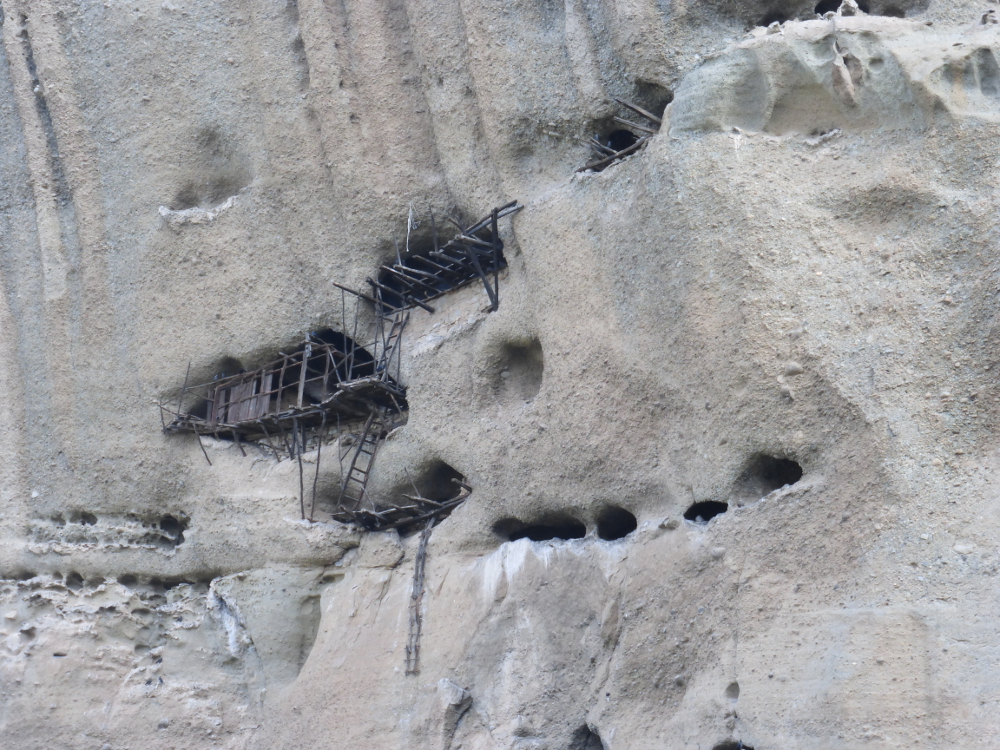 Monk Condo in Cave Wall. Villagers would provide food lifted to the cave by baskets tied to rope in exchange for spiritual advice.

Beyond the amazing sights Meteora offers up some very good Greek food. We had dinner at Archontariki and feasted on specialties of the house including melted cheese topped with roasted vegetables. 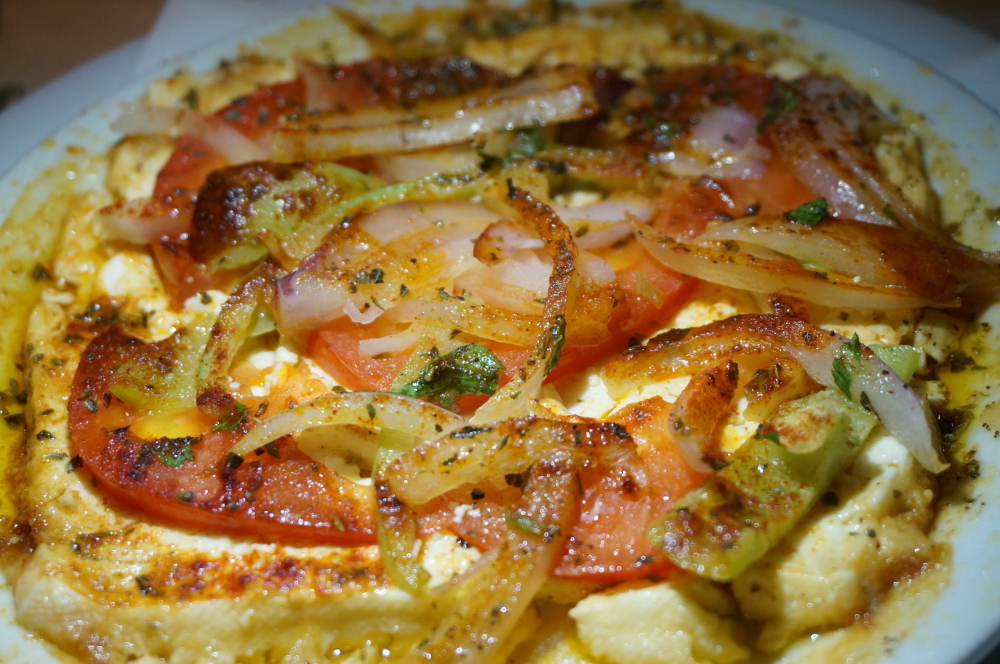 Melted cheese with vegetables – as good as it looks

Visit Meteora now also gives additional tours including bike tours, whitewater rafting and world class rock climbing, to name a few. We left wishing we had more time to spend, but then again, we have more than enough reason to return. 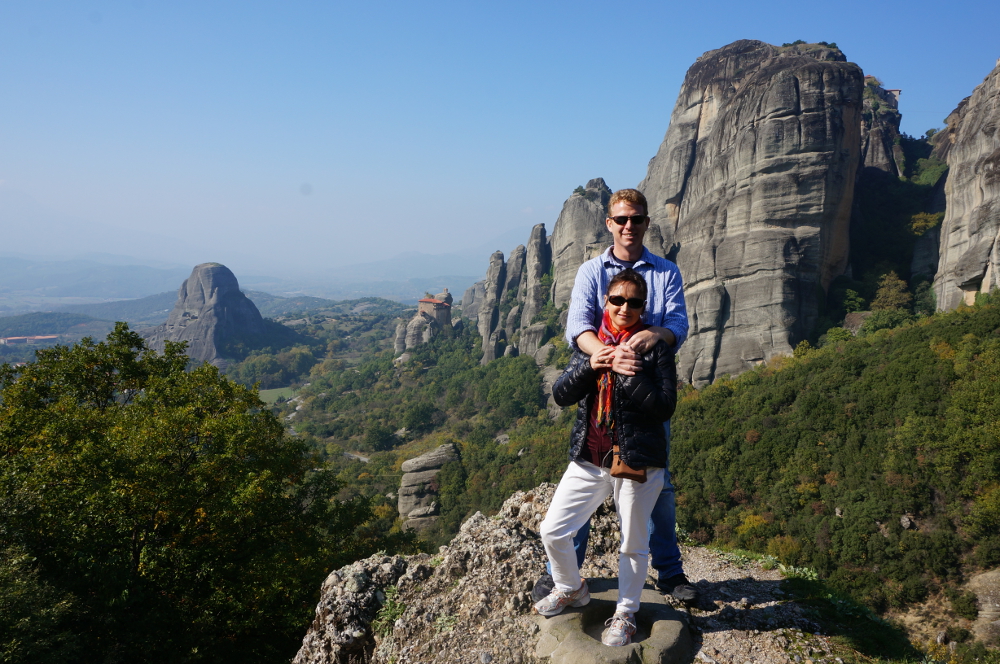 Taking in the View

Getting to Meteora is an easy 4 1/2 hour train ride from Athens, but there other other options as well. Plenty of tour operators offer day trips for those who want to leave the planning to someone else.

The best time to visit Greece is in Autumn or late Spring, when the temperatures are mild and the crowds are thinner. 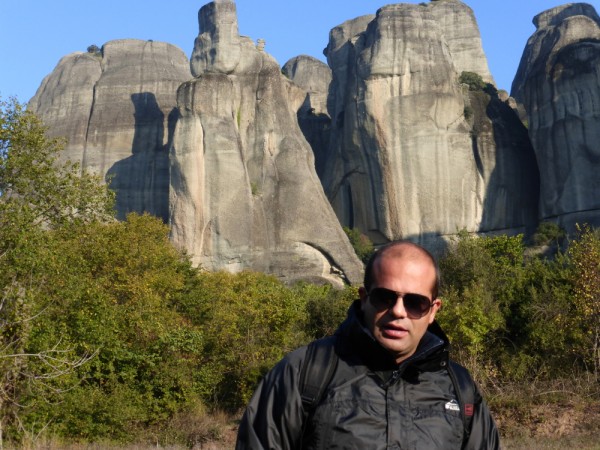 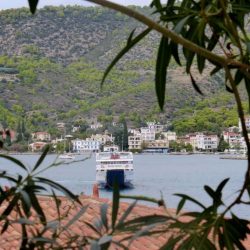 Disclaimer – Our trip to Meteora was provided by Visit Meteora but our opinions and impressions are our own.

I've never actually heard of Meteora before (I'm not very well traveled). But I think after reading this it's most definitely a place I'd consider visiting :)

Thanks for the comment! Meteora is even more beautiful than it looks in the photos. And Greece is amazing - if you decide to go you'll have a fantastic time.

ok, so what do you write in the comment if you're just speechless???? WOW! breathtaking!!!!!

The place is pretty breathtaking - I agree. Thanks for commenting!

The history and facts concerning Meteora never cease to amaze me. It looks like a dream: unreal and almost like something straight out of Photoshop. It is on my bucket list, but probably got kicked up a notch after reading this post!

I've also heard lots about Meteora lately and I'm really wanting to go very soon. The pictures you took are amazing, and I will definitely think of George's tour. That dish with cheese and veggies look scrumptious!

Hearing a lot about Meteora recently - looks and sounds like an amazing destination - your photos are inspiring! I never pictured Greece like this, I think my perception of Greece were the blue roofs of Santorini :D!