White Water Rafting in Ecuador was one of the most memorable things that we did during our trip. You’ll find out why soon.

I have to admit that initially the idea of traveling to a place called Baños gave me pause.  Isn’t one of the very few phrases most of us learn in Spanish “Donde estan los banos?” (Where are the bathrooms?).

In this case Baños de Agua Santa. Baños is considered the gateway to the Amazonia located at the base of the Tungurahua volcano.  Standing in the center of the quaint City you are surrounded by a wall of green in each direction.

The view is dotted with waterfalls and storefronts inviting you to try out activities that the area is most famous for: eco-sports and thermal baths.  Pinch me now. 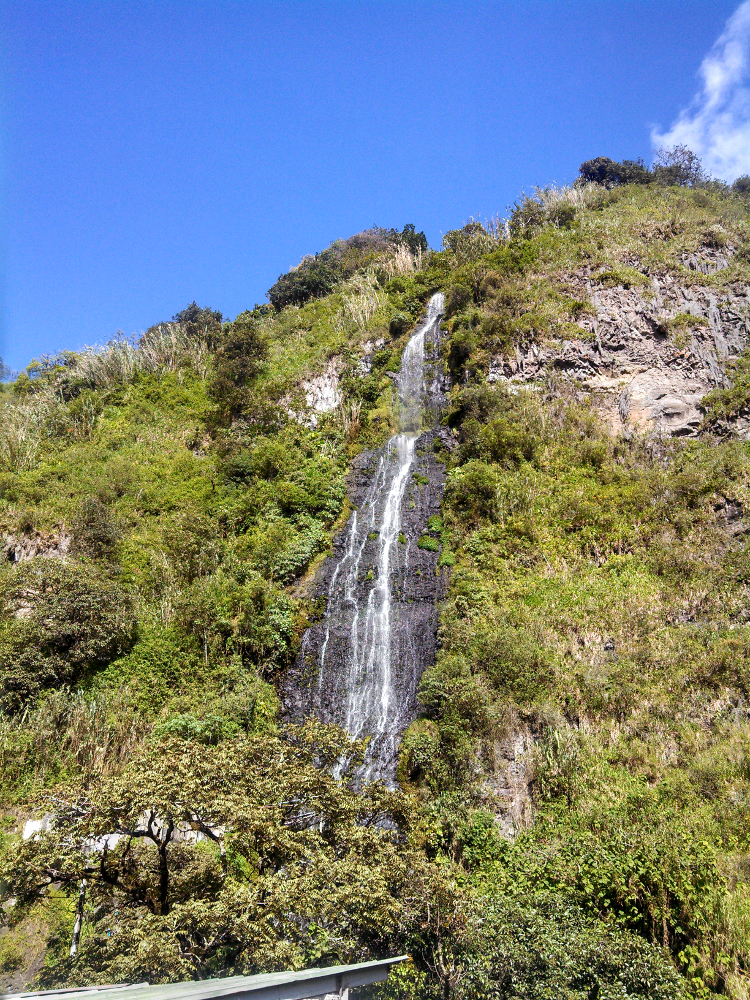 Sean and I decided to go for whitewater rafting.  We headed to a tour agency recommended by our hotel.  One of the staff in the kicked-back outfit told us about a day on the river on class 3-4 rapids (what does that mean?).

He said we would be given a safety instruction, one hour on the river and a traditional lunch.  Another staff member showed a video of smiling rafters heading down the river.  Sounds good.

Out of the corner of my eye I see three of the people in the rafting video fall out, all at once.  The video now has my full attention.  I point at the screen. “Does that happen often?”  I ask.

The Guide explains that this does happen every so often but the river was low when they took the video which results in more play in the water.

The water now is “more calm” he explains, but should still give us a great day of rafting.  We agree to sign up for a trip the next day. 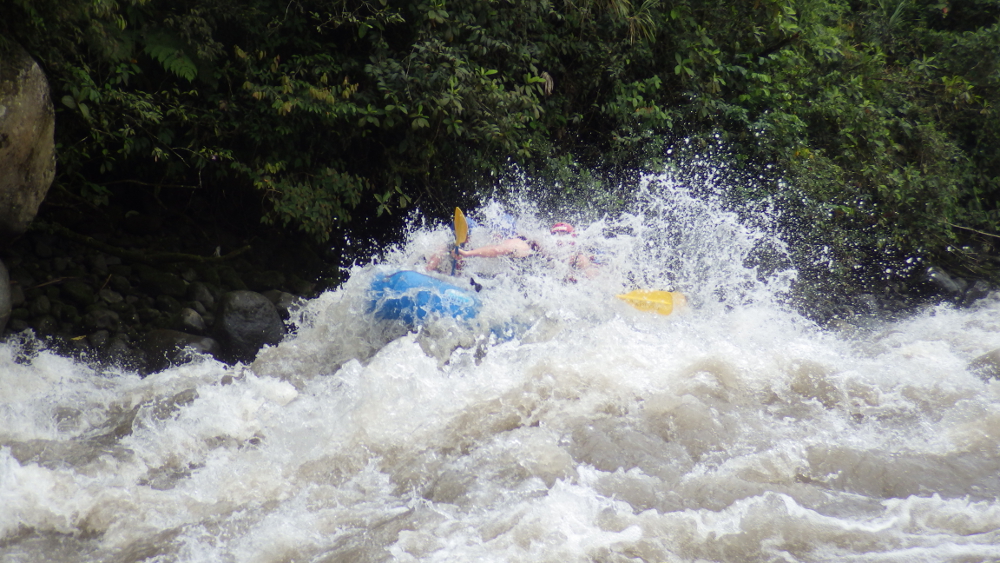 We arrived at 9:00 a.m. and were joined by 13 other travelers from Australia, Ireland, Uruguay, Colombia, and the U.S.  We lined up to get our gear.

A guide sized each of us up and handed each of us a damp wetsuit, helmet and a pair of canvas and rubber shoes.  Um, What is that smell?

We then pile into a van and drove for 30 minutes to the launch site.  The scenery was utterly spectacular.  Ok, I can put up with the soggy outfit.  This has the feel of a once in a lifetime experience.  Onward! 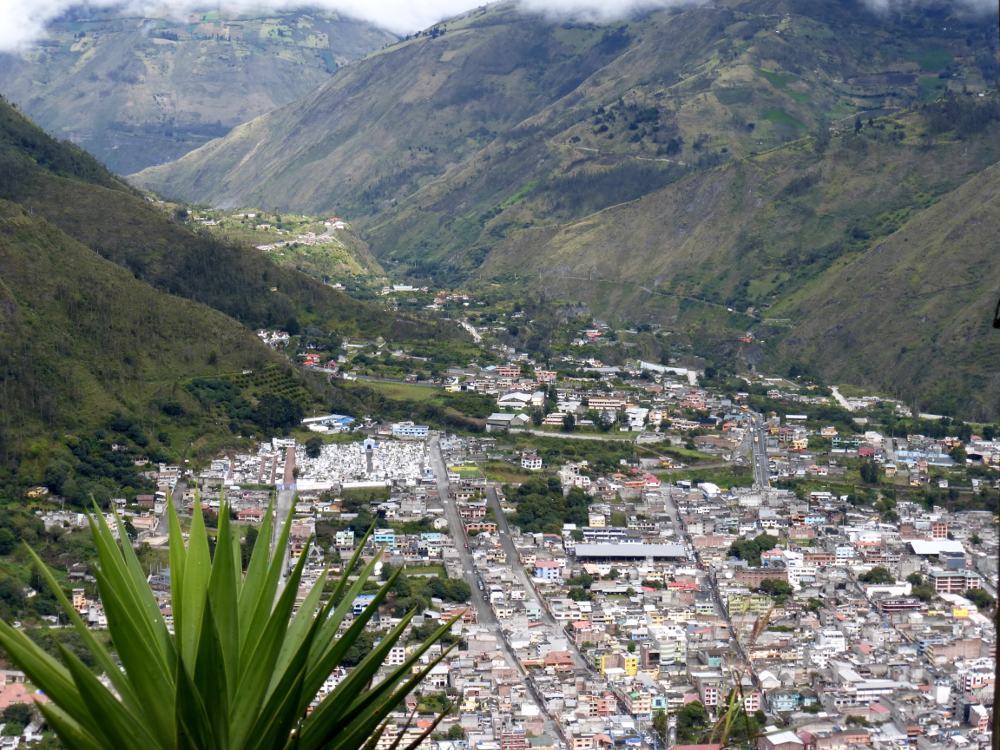 Banos Ecuador from above

During the drive one of the Guides gave us a brief description of the events of the day and had us introduce ourselves.  We learned some of the travelers were pretty experienced at whitewater rafting, and quite a few of us had little experience.

Sean and I had rafted once before, and a few of the women described themselves as being “terrified” or “very nervous.”  I thought we should try to get in the raft with the Australians who were very jovial and said they had done this several times before.

We got to the launch site and suited up.  Because it was a large group one of the “helpers” who looked about 15 years old was stuck blowing up one of the huge rafts with a hand pump.  During this we were given instructions by one of the Guides.

He made it clear that if we were to fall out of the raft the first thing that they were going to rescue was the paddle, which, according to him, cost $60 each.  Secondly they would save you, so whatever happens hold on to the paddle.  Noted. 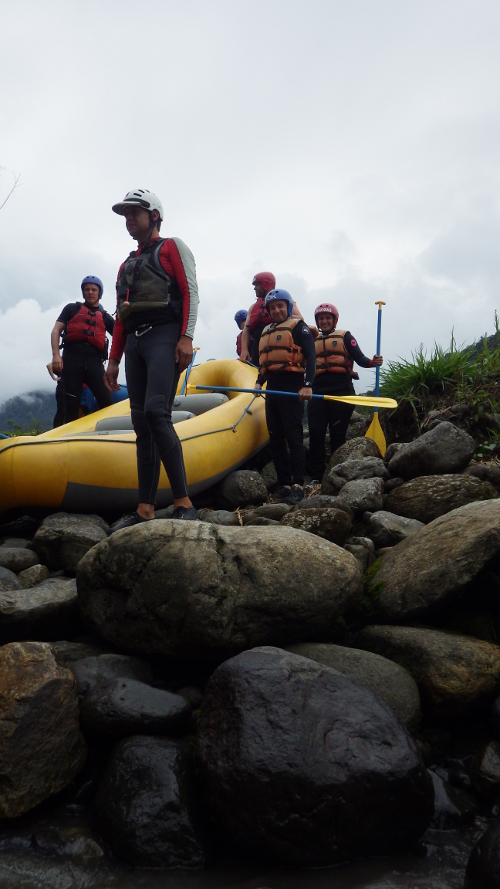 The Guide gave us detailed instruction as to what to do if you fell out of the boat or if it happened to flip over.  Ok. Got it.

He emphasized that if we sat at the very edge of the boat and paddled using our whole body, hooking our feet under the rubber dividers had very little chance of this happening.  Hmm.

The Guides then asked us to form small teams of 5.  After some shuffling around Sean and I found ourselves in the raft with the new, the terrified and the nervous.

It Takes a Team

We eyed each other.  I decided to instill some optimism.  “I know we’re inexperienced here, but we have these 2 strong guys on the team to power us along.”

The other male on the team pointed to his thin arms and said “Have you looked at me?”

The woman from Uruguay flexed her arm in demonstration that she could offer some power to the team.

While she may have had some confidence in her own ability to rise the occasion, I noticed her glancing at the other teams.

She seemed to be asking whether they were going to send a guide with us or if we were going to be launched down the stream on our own. 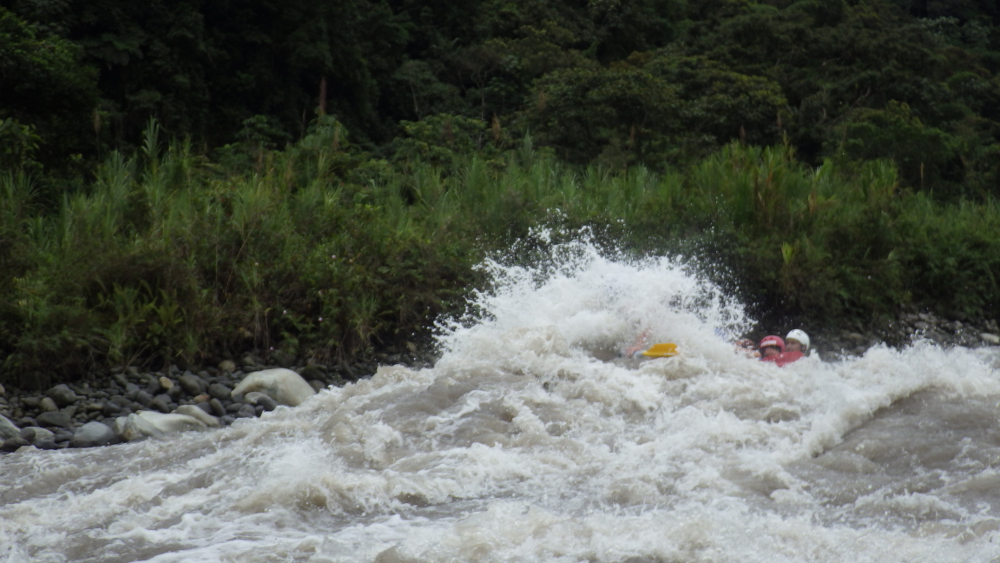 Our assigned Guide joined his group and surveyed us with the same skepticism that hung like a cloud over our group.

He visited each one of us and tightened our life vests, pulling on the scruff behind our neck presumably so he could test whether we could be plucked back out of the water.

I had half expected that he would see the error in our pairing and divide us up amongst the other teams.  Instead he wandered off to put on  his own gear and asked us to come up with a team name.

During another conversation one of the Australians had mentioned that in his last trip they had flipped the raft several times – no safe harbor.

We mustered together and began throwing around some names.  “Rough Riders” I suggested trying to be upbeat.  No takers.  We settled on the team name “Swimmers” seemingly to just make peace with the inevitable.

The Kayaker who was assigned to our trip came over to explain his role.  He explained that in the event that we fell out of the raft that he would come to the rescue, if needed.

In order not to sink the both of you in that situation, he instructed us to grab the back of the kayak by the handle.

Option B was to “be doing the sexy pose” by grasping the front of the kayak wrapping your arms and legs around the bow.  A vacation picture coveted by nobody. 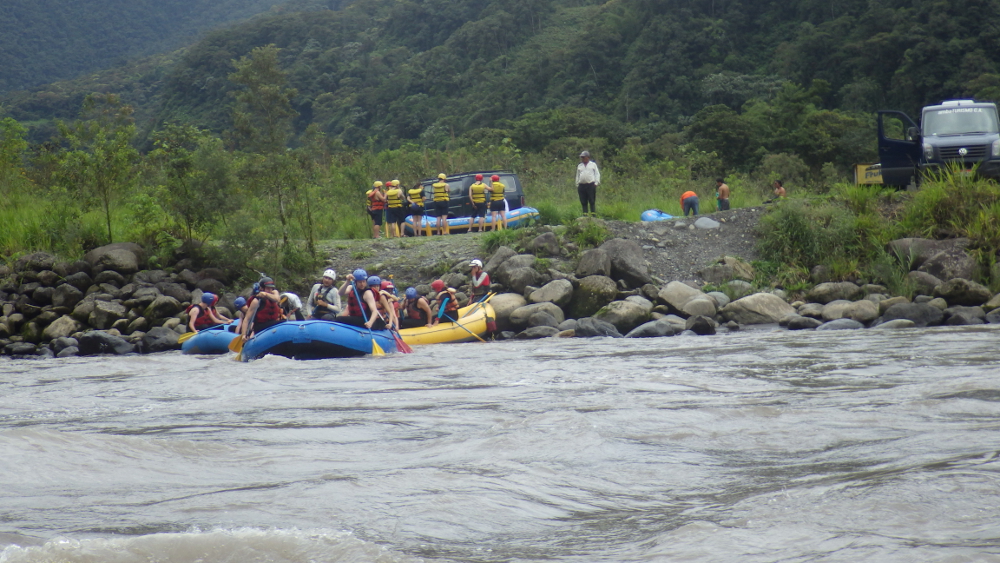 We boarded the boat, not with confidence per se but a strong collective desire not to go overboard.

We paddled our way into the first group of rapids with the boat crashing along sidewise taking on a good bit of water.

In about 5 minutes I saw Sean, who was powering along in the front of the boat, wash over the side.  Not good.  Not good at all.  At this point, Sean is better off describing the “in the water” experience:

Sean Goes for a Swim 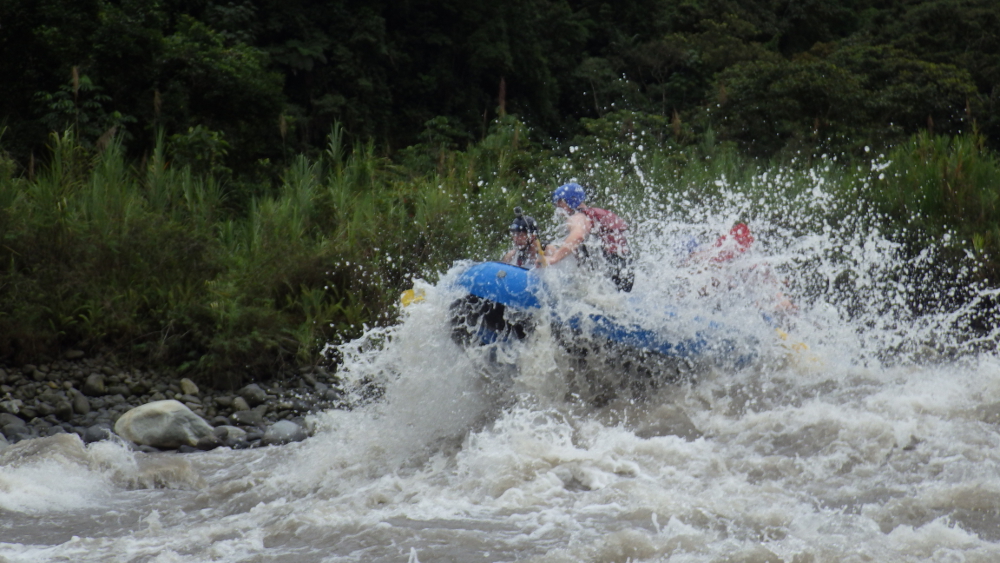 Taking a bath in Banos

It’s interesting how things slow down in the moment. As we hit the first rapid, and the raft rolled down then up, I looked down at my foot, tucked under the strap that was supposed to hold me in the raft.

I watched as my foot smoothly and easily slipped out of the strap. “That’s not supposed to happen,” I thought. Then I was in the water.

What is it like heading through a section of rapids without a nice air-filled raft between you and the water/rocks? It’s probably best described by my thoughts in the water:

“Ok, I’m supposed to float on my back, with my legs up, and the paddle between them. They didn’t tell us that when you lift your legs up your head goes under water.  Glug.”

“I think I have the wrong sized life vest. I’m spending more time under the river than bobbing on top of it. And drinking plenty of it too. Glug. Gasp.”

“Good thing I have a helmet. That was a big rock. More rocks. Ouch. Rock. Rock. Ouch.”

“I’m supposed to keep the raft in sight, but I’m facing the wrong direction. I’ll try to turn around. Hmm, nothing seems to want to cooperate. Maybe I’ll just have another drink of river water.”

“There’s the raft! Why is it so far away? And getting further away?”

“Ok, I’m getting the hang of this. Legs up, paddle between knees, facing downstream. Drink a big gulp of brown river water. Repeat.”

“Hey, there’s the guy in the kayak! I’m saved! Wow, does the river guide in the raft look pissed!”

Heading for the Rapids

Once Sean was restored to his seat in the front we began paddling along toward the second set of rapids.

We made it down without losing another member of flipping over – success!

Well, we kind of thought so but our Guide told us that he was unimpressed with how we were not paddling together and that his grandmother could provide more power than this group.

Clearly he had drawn the short straw as far as rafters this time around.  Despite all of the warning signs and collective better judgment our guide steered us back into the rapids. 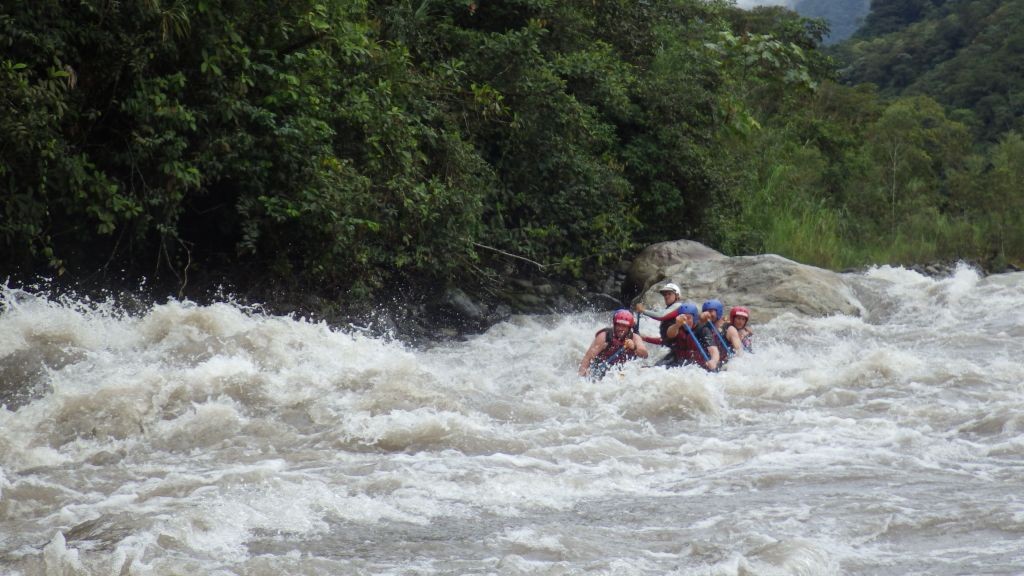 I’m sure the scenery is lovely but it’s lost on my at this point.

We made it down the next set of rapids with more success and our Guide began to give us a small measure of praise.

We clanked our paddles in the air after every successful trip down another set of rapids yelling “Swimmers!”  and smacking our paddles defiantly in the water.  Maybe there was hope for us yet? 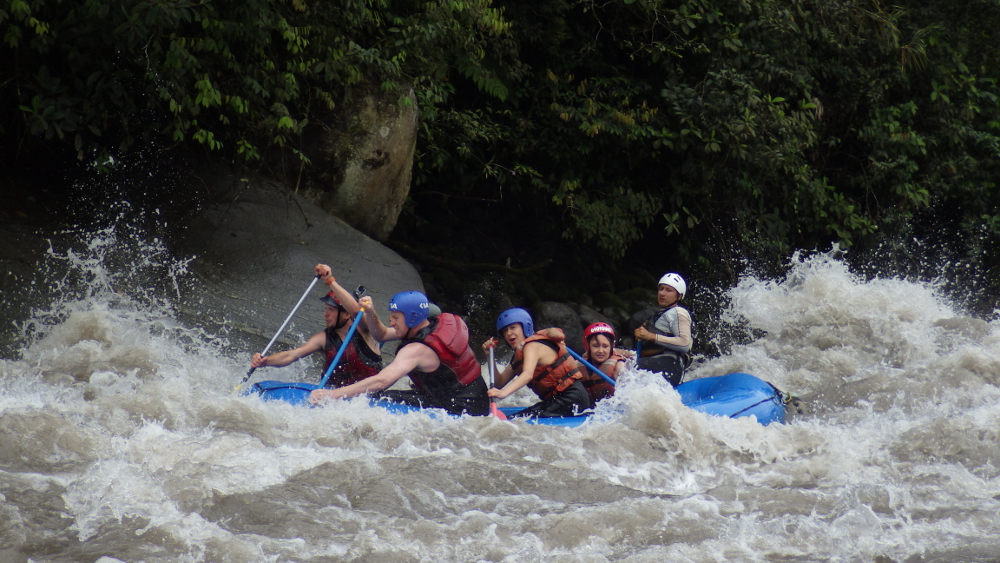 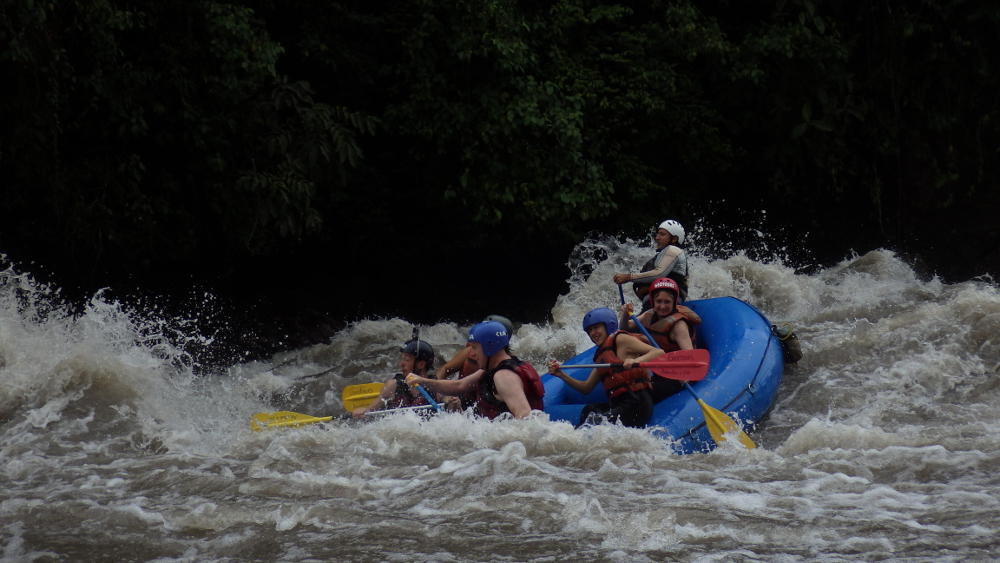 Despite falling into the middle of the boat quite a few times on the rapids by the end I felt like I was getting the hang of it.  The whole team was working well together and we had an exhilarating ride.

When we were told that the we had reached the end we all let out a collective “Awwww.”  Just when we were getting the hang of it.  But it left us feeling accomplished and hungry for more.

Here are some related articles about travel in Ecuador that you might enjoy. 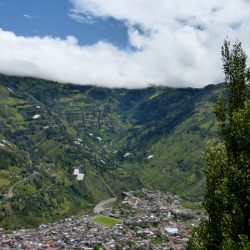 We did this rafting in Banos. We have rafted in a few locations and this white water was by far the best! (we were there in January). Our whole raft flipped and we all floated off down the river. Myself and my hubby got stuck under the raft for what seemed like minutes but in reality was only seconds! I went floating off way down river and as i had been listening intently to the safety and rescue instructions I knew what to do! My hubby on the other hand was daydreaming and wished he had been listening. All was well in the end and only one guy was damaged when he hit a rock. A great experience!

We're in Cuenca now, but plan on visiting BaÃ±os and I've always wanted to go rafting. Thanks for the pro tips. I'll be sure to clutch on to the nearest paddle should I fall off the raft.

So exciting just looking at the photos. And yes Sean, the wrong size vest can be distracting. Sounds like an all around great time.

So glad you enjoyed your rafting trip, even if it did include a bit of a swim :D I've been a few times and lukcily have somehow managed to stay within the boat at all times...while on the rapids anyway; the guides capsized the boat at the end on calm waters because they thought it would be amusing lol. Thats the one thing I will give the white water rafting tours I've done - they always have a great sense of humor which makes for a super fun day, though are always very safety conscious to ensure you don't drown! Good balance to have :D!

This looks like such an amazing adventure. I've always wanted to go white water rafting!