David Gareja is a cave monastery near Tbilisi, Georgia. We visited similar sites during a trip to Cappadocia, Turkey, and couldn’t pass up the opportunity to see this one. Particularly since it was so close and easy day trip from Tbilisi, and that there is now a shuttle bus that travels there every day. According to their website, the bus leaves from a central location, Freedom Square, takes about an hour to get there, and returns about 7:00 p.m., and costs only 25 GEL (about 10 USD) per person. Sounds like a no-brainer, right? Well, all was not quite as it seemed.

Note: There are also organized tours to David Gareja from Tbilisi that you can book so that all of the details are worked out in advance.

We arrived at the parking lot at Freedom Square and were greeted by a pleasant English-speaking woman, who asked if we were planning to join the trip to Gareja. When we responded in the affirmative she handed us a pamphlet about the trip and were told that the shuttle would leave at 11:00 a.m., as expected.

According to the pamphlet, the trip was actually going to take two hours each way. Not a game changer for us. It also indicated that we would be stopping at a gas station in order to buy water as none was available at the monastery. We were to arrive at 1:00 p.m., have 3 hours to tour the site and then return to the van at 4:00 p.m.  The shuttle would then take us to a nearby restaurant before returning to Tbilisi between 6:00 and 7:00 p.m.

The van wasn’t new but it was fine, although the lack of air conditioning was a bit of a disappointment. We set off and were provided quickly with our second surprise of the day. The road to David Gareja starts with a trip through a highway without any marked lanes. So people just made their own. Who needs a lane or blinker when your car is equipped with a perfectly operational horn? Apparently, no need at all.

On the Road in Georgia

As we entered more remote areas our trip was hindered by a large number of potholes and the more than occasional cow crossing. We quickly gathered that our driver had his fill of cow crossings, as each meeting resulted in a shouting match with the accompanying farmer (which was actually pretty funny).

Our next surprise was that our Georgian speaking driver was also a chain smoker who indulged in his favorite habit several times along the way. This shouldn’t have been a surprise since 80% of the cab drivers we encountered also smoked in the car. This didn’t seem to bother the other riders, many of whom were also smokers, but luckily none of them took the drivers lead and actually lit up in the van.

Along the way our driver pulled over twice, and uttered one of three English words that we discovered he knew. This one was “photo”. Each time this occurred everyone obliged, got out of the van and snapped a few shots. Not sure if I needed or wanted this photo, but when a gravely voiced Georgian driver gives you an instruction, you did what was asked, without question.

We finally arrived at our destination at 1:45 p.m.. The bus driver then uttered the second English word he knew, “four” which presumably was the time we were expected to return (noted). Despite their being a few buses at the sight, the area wasn’t crowded. Seeing the monastery and the caves carved into the hills was impressive. 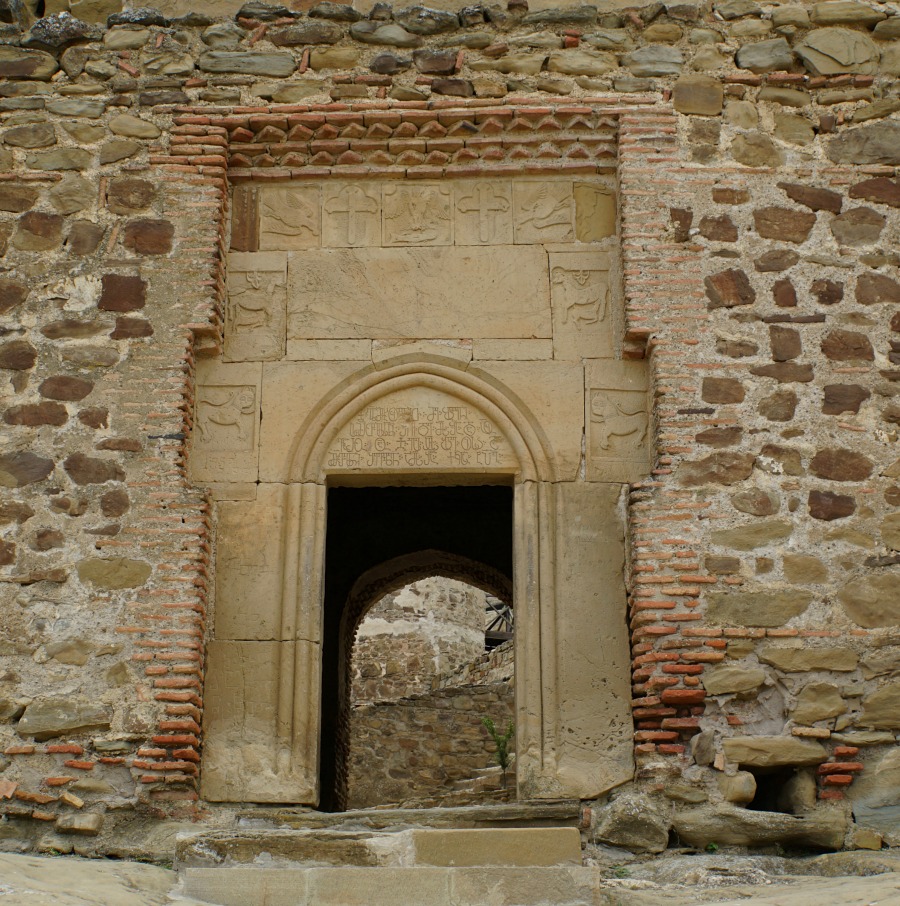 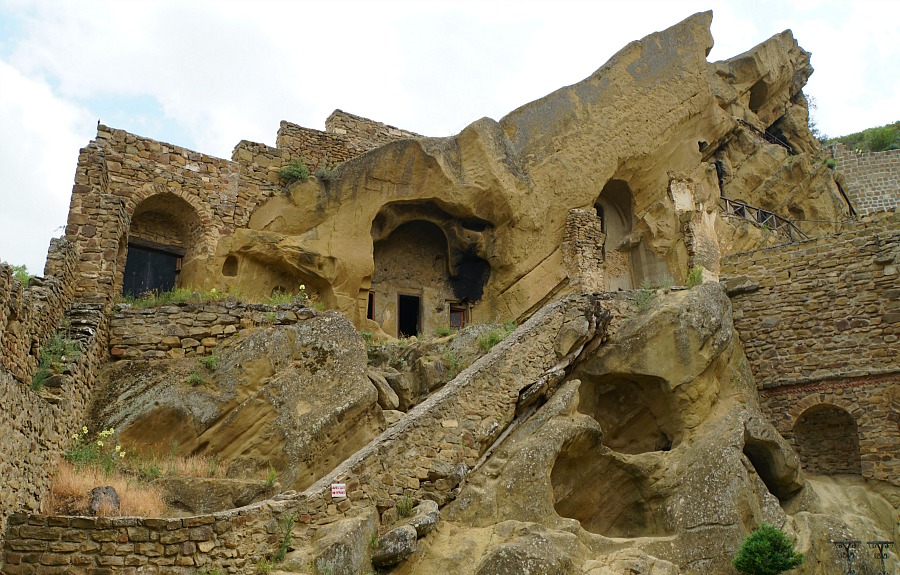 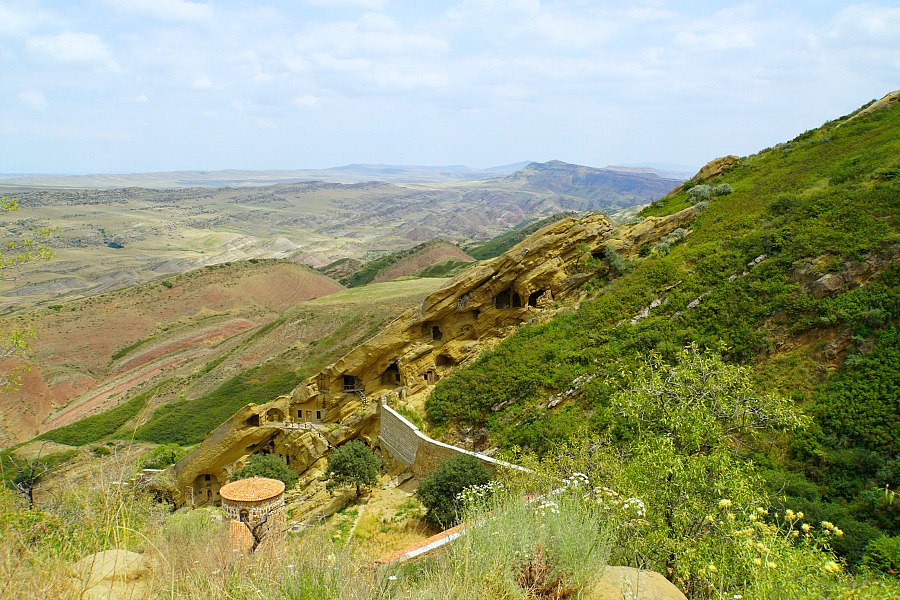 We climbed up the steep path, which took much longer than the 15 minutes advertised in our pamphlet. The trail consisted of nonstop steps, and was a little bit of a challenge on a hot day (which it was). Happily we didn’t run into any of the creatures of the area mentioned in our pamphlet – snakes. There were plenty of hidey-holes, but thankfully none of the resident snakes presented themselves during our visit.

At the top of the hill, which is also the national border between Georgia and Azerbaijan, we met up with two armed border agents. They didn’t give us a second look. They seemed more concerned with finding a good place in the shade, which was provided by a small church. Preventing the invasion of their homeland seemed a secondary concern at best.

We made our way down the path and found another cave along the way at the top of a set of steps carved into the stone. There was a series of grooves carved into the rock that served as path for running water, which was collected in underground caves. The other sight we enjoyed was the vast expanse of grassland in the area, which at this point was covered in stripes of wildflowers that gave them the appearance of being painted.

We made it back to our starting point and made our favorite discovery of the day. In the gift shop the monks sold wine they had made themselves.This bottle, a blend of saperavi and cabernet grapes, with a hand written number noting it was bottle #179 of 200 made the ride home with us. We picked it up for 30 GEL. Clever monks!

After loading everyone up, the driver lit up a cigarette and pointed the van toward a small town nearby. He stopped in front of the Oasis Club restaurant and uttered his third word in English, “Eat”. We entered the funky restaurant/bar and enjoyed a cold beer and glass of home-made wine. We also ordered a local dish, cauliflower with sulguni cheese cooked in a clay pot with bread dough baked over the top. It was really fantastic.

We hung out with the few resident dogs, glancing at signs telling people not to feed the dogs, which everyone ignored. I reflected that the whole day was a good microcosm of our time in Georgia. The pace is relaxed and most days things don’t necessarily go as planned. But the food and the mood is always good, and if you can sit back and go with the flow, a good time will always follow.

As we drove back to Tbilisi, I reflected on Georgia’s wishes to join the European Union. We heard about this desire and saw evidence of it as we walked around the city center. There are EU flags flying next to Georgian flags throughout Tbilisi. Do Georgians realize that becoming EU members might make them give up some of the things that made being Georgian fun? Things like home-made wine, home-made cheese and smoking as they please, when and where they please? I’d bet if you had to ask our driver, he would probably say no. Let Georgia be Georgia, and enjoy.