It was our second day on our first trip to Seville, Spain. We’ve had several trips to this beautiful country, including trips through Catalonia, Madrid and Barcelona and were ready to discover what was unique and special about this southern city. What we discovered was quite a bit.

Here, the best meals are had late at night and often while standing up. The most popular iced dessert is not gelato, and Sevillanos mainly serve sangria and paella to tourists. While all of these revelations may have been a surprise (and slight disappointment on the sangria front) it made the idea of discovering what was uniquely Seville all the more intriguing. Which is what we proceeded to do, with the help of Devour Seville.

We had been introduced to Devour Tours on a recent trip to Barcelona. On that tour we were taken through the Gracia neighborhood where we were shown restaurants that were frequented by locals. The food (and there was a lot of it) was some of the best we had during our trip. Based on that experience we decided to make the food tour our first our agenda in Seville, and it turns out, that was exactly the right call.

After meeting up with our guide and the rest of the group, we headed to a popular breakfast spot. Maria, our local guide, stopped in front of the restaurant, flashed a smile and suggested that we put our trust in her. While I was quite open to this I have to admit a small alarm was going off in the back of my mind. The flavor may seem a bit strange, she cautioned, but after you taste it you will understand. Fair enough, I thought. We were presented with a platter of mini toasted sandwiches filled with slow cooked pork, Tostá de pringá. 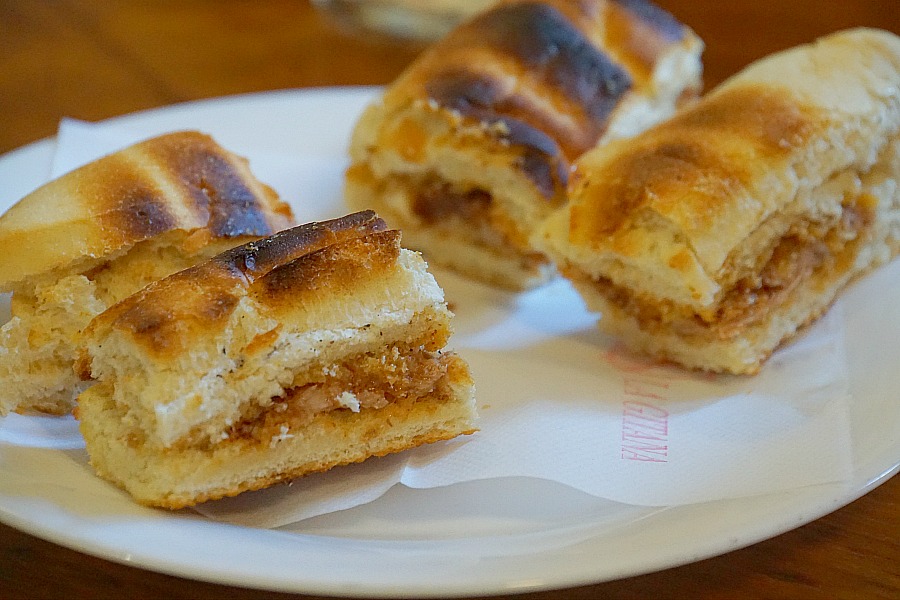 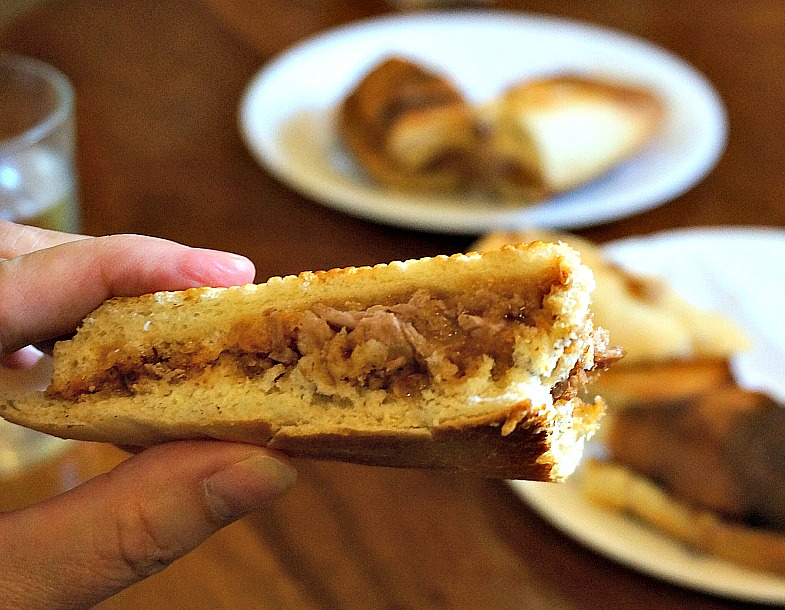 I actually liked them so much that I was tempted to grab a second one. Having experienced the Devour Barcelona tour and subsequently waddling away with an overstuffed stomach, I knew that would be the wrong call. But I did have to wrestle with the idea anyway.

The next stop was at one of Seville’s most controversial buildings, the Mercado de la Encarnación, contained within the Metropol Parasol. In Seville, where tradition and pride is paramount, the new plaza, which looks very much like a giant cluster of mushrooms, has had less appeal for the locals. 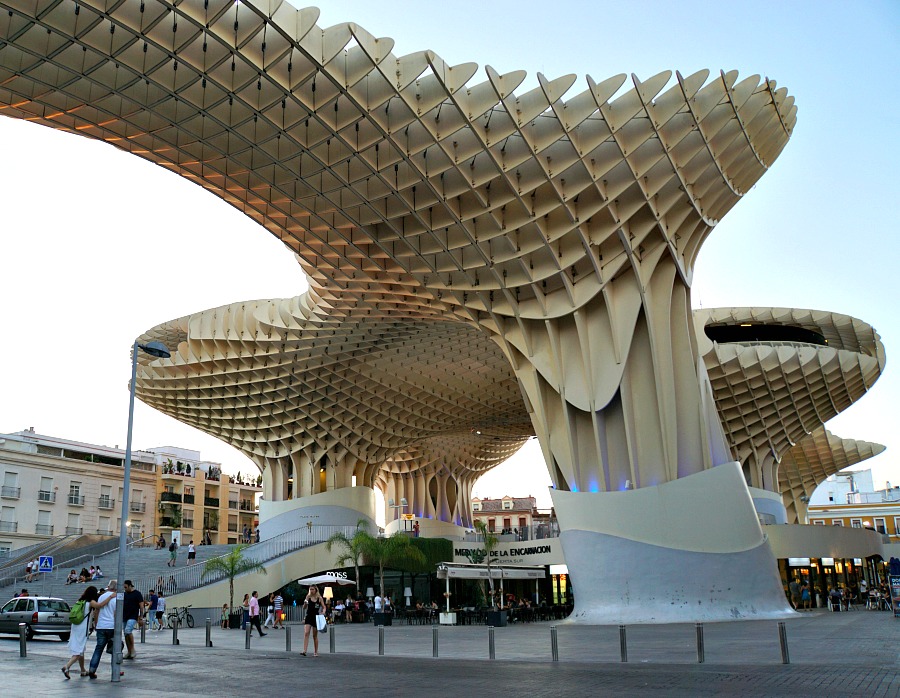 What has warmed them to the strange-looking structure is the lure of a drink at the bar on top of the building, and the bounty of quality produce and artisan products inside the market on the first floor. As Maria pointed out, many Sevillanos grew up shopping in tiny neighborhood markets. This building housed experts in gourmet cheeses, fish mongers selling a wide range of seafood and vendors specializing in the famous Iberian ham. 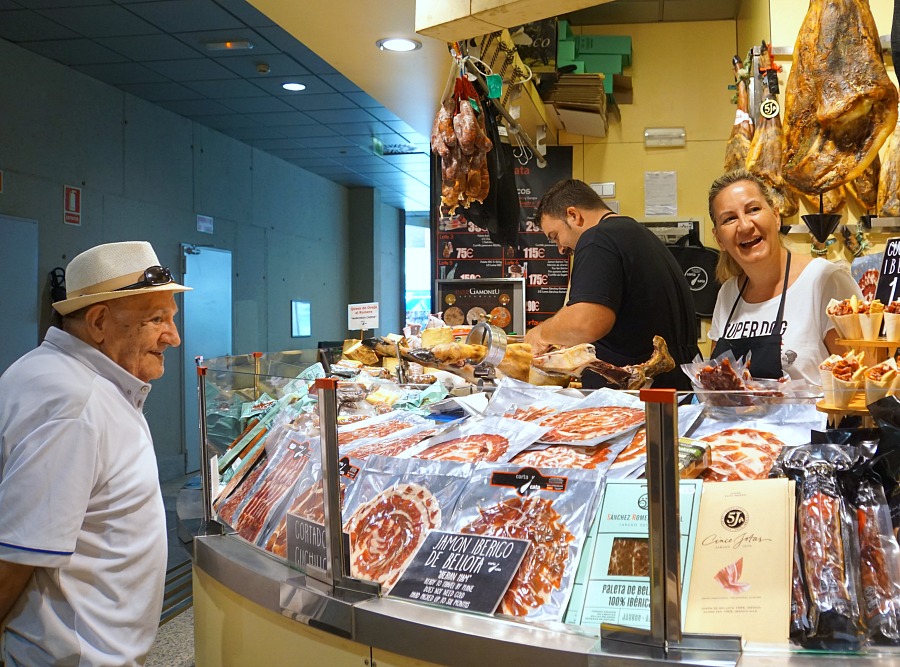 We were given a demonstration of the proper carving technique of the ham, which is said to be even more important than the curing process. It can take years to become recognized as an artist who can carve the ham correctly, making a slim slice that has just the proper amount of fat. The slice should be so thin in can allow light to pass through like a delicate stained glass window. 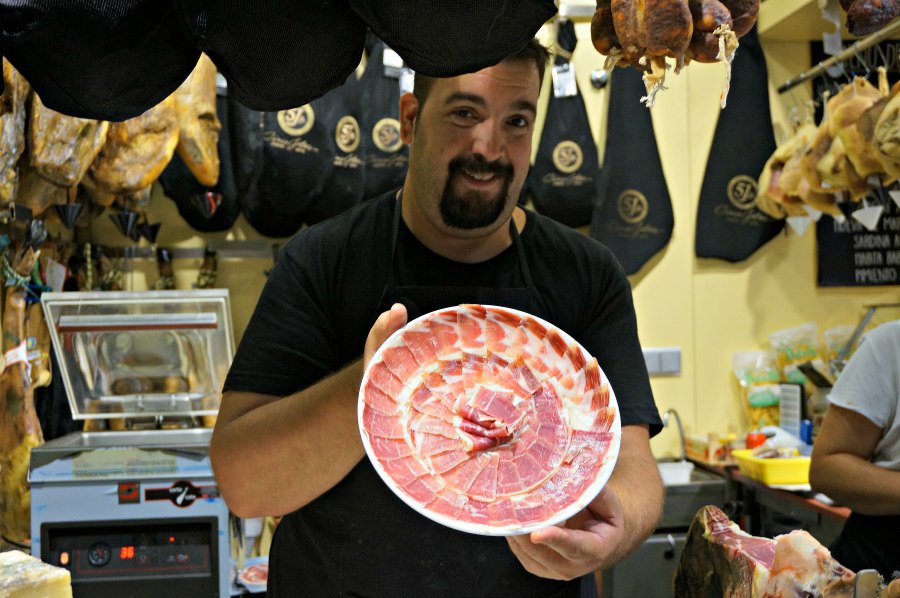 Here’s a quick video demonstration of how it’s done.

With food this amazing, we could see why the locals would give the architect a pass, ignore the exterior and head directly for the ham. 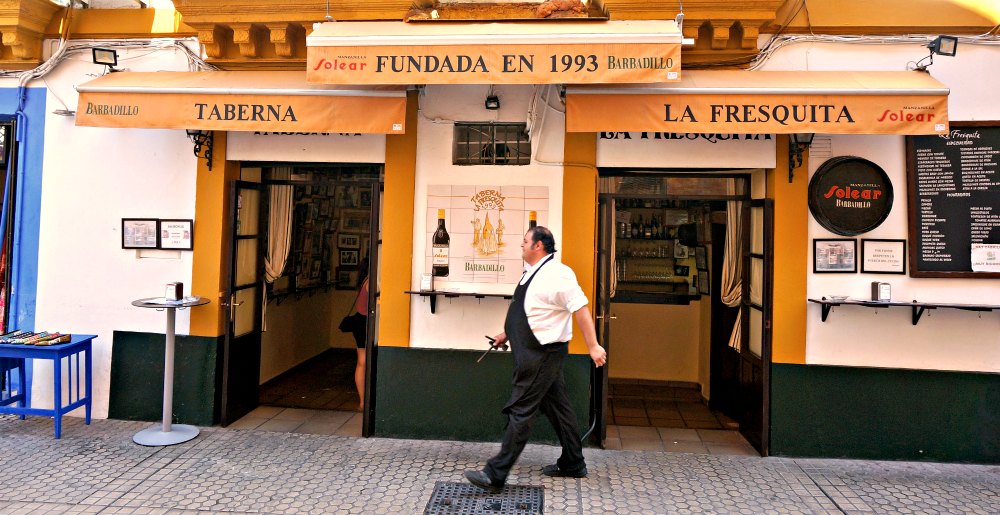 Our favorite stop on the tour was at a tiny bar where we crowded in and were warmly welcomed by the owner and staff. There were no seats in the dark bar, but instead plenty of room to lean on the bar and elbow level shelving along the walls where locals line up to enjoy their favorite tapas. This was also the spot where we were dealt our worst blow. Seville, we were informed, is not a place where we were likely to find a good glass of sangria.

My hopes of sitting outside watching the world go by on a sunny Spanish afternoon with a sweet glass of sangria was crushed. As it turns out, the process of marinating the fruit overnight in wine (which is necessary for good sangria) is impractical for a small local and very busy bar. Sevillanos instead drink tinto de verano – red wine with a good dose of ice mixed with a lemon soda. It’s actually quite good, and at an average price of about 1 – 3 euros a glass, you can see how it would gain popularity. 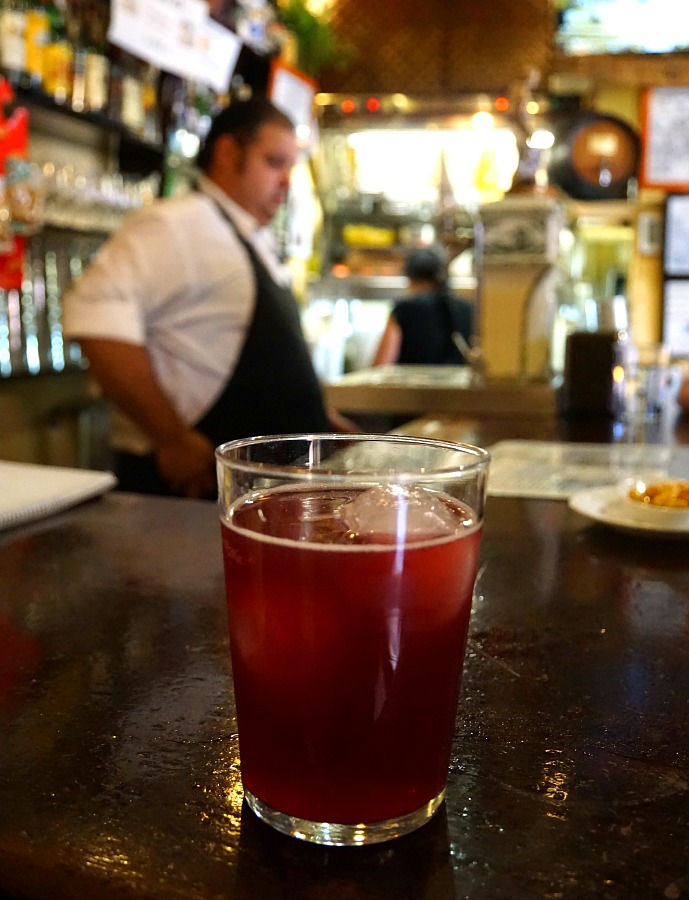 As I wandered around the city, I noticed other tourists with drinks laced with what looked like canned fruit cocktail, and decided that tinto de verano, indeed was the way to go. 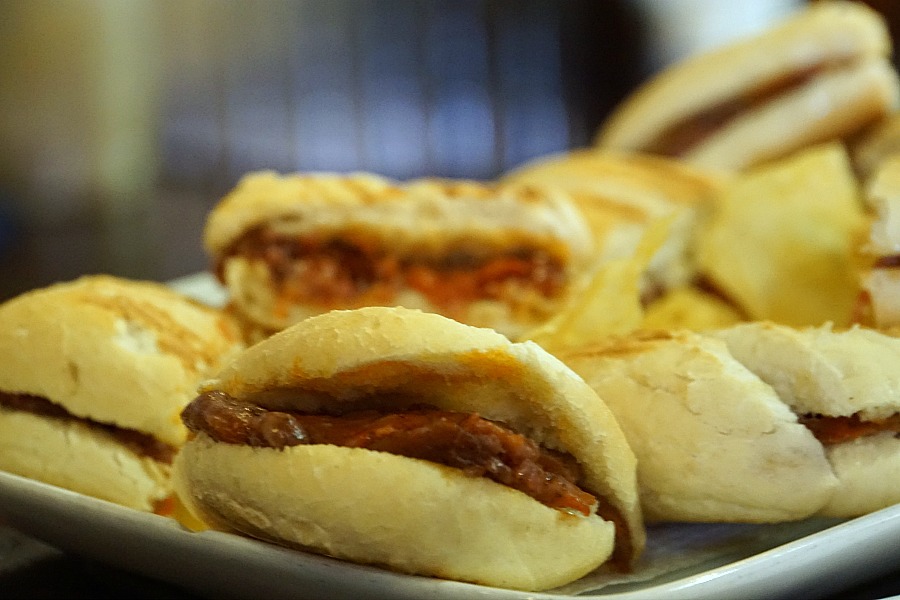 We enjoyed our drinks with more montaditos (sandwiches), in this case spicy chorizo & roquefort cheese and carne mechada, slow cooked beef in spicy gaucho sauce. I pocketed a paper napkin printed with the name and address of the place so we could find out way back (a move that turns out was totally unnecessary since Maria later told us she would be emailing us with the full details of our tour).

Of note in this tiny bar was that it was covered in memorabilia honoring the traditions of celebrating Easter in Seville. Semana Santa, as it is called, is highly anticipated and is marked with ornate parades. Groups of locals called “brotherhoods” decorate their floats and parade them through the streets on their shoulders. A plaque on the wall indicated that there were 217 days to go until the next “Santa Semana.”

Maria indicated that all traditional restaurants and bars would have at least one picture on the wall paying homage to the celebration. If not, the place was more than likely there solely to lure in tourists. This was another tip that we put to good use during our time in Seville.

The parties don’t end there. Traditionally two weeks after Easter, the Seville Feria (Spring Fair) begins. During the fair, for days the streets of the city are backed with people celebrating, the women wearing dazzling dresses that cost upwards of $500 each. 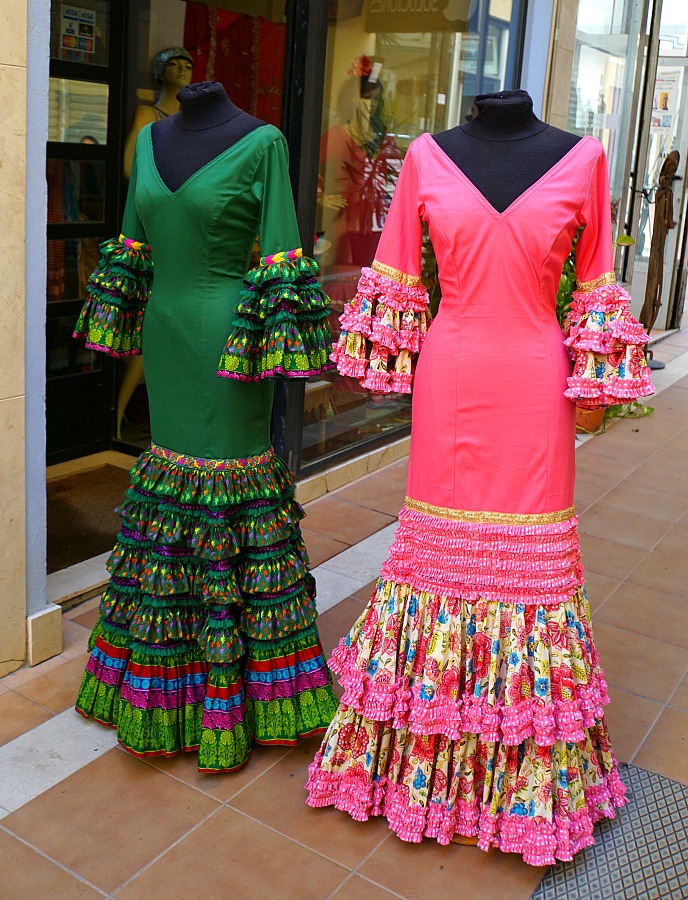 At the next stop, we had several more bites, including this amazing slow roasted pork with a homemade Gorgonzola sauce over hand cut fries and a glass of local wine. This was served to us at another small local bar featuring large cement containers where wine used to be stored. 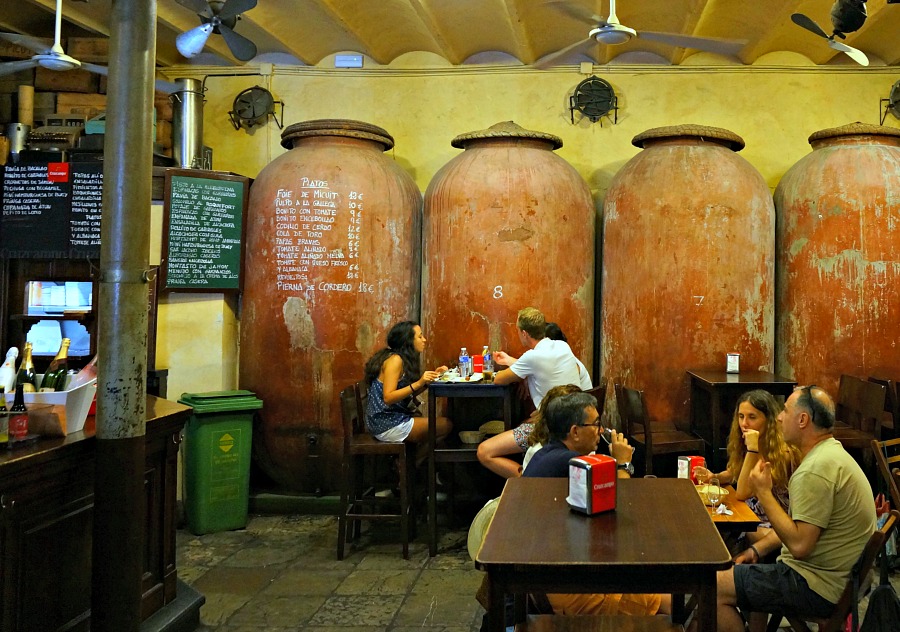 Locals bar with a daily offering of homemade tapas 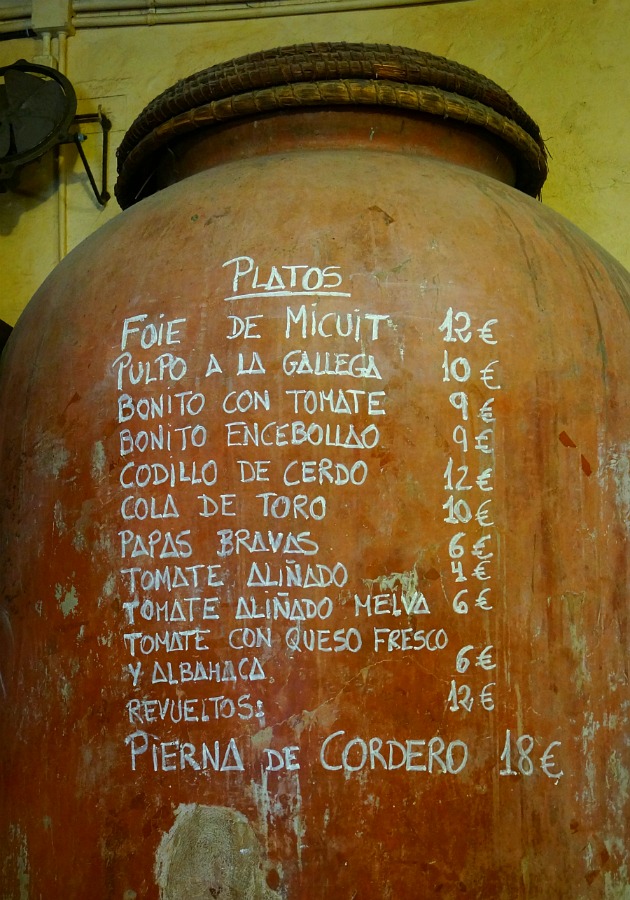 Specialties of the house

We also tried bit of traditional marzipan-like cookies spiked with one of Seville’s most loved flavors – bitter orange, made at a local convent. The dessert is very popular over the holidays when there is often a line out the door (partially as a way to support the nuns who live there and produce the snack). 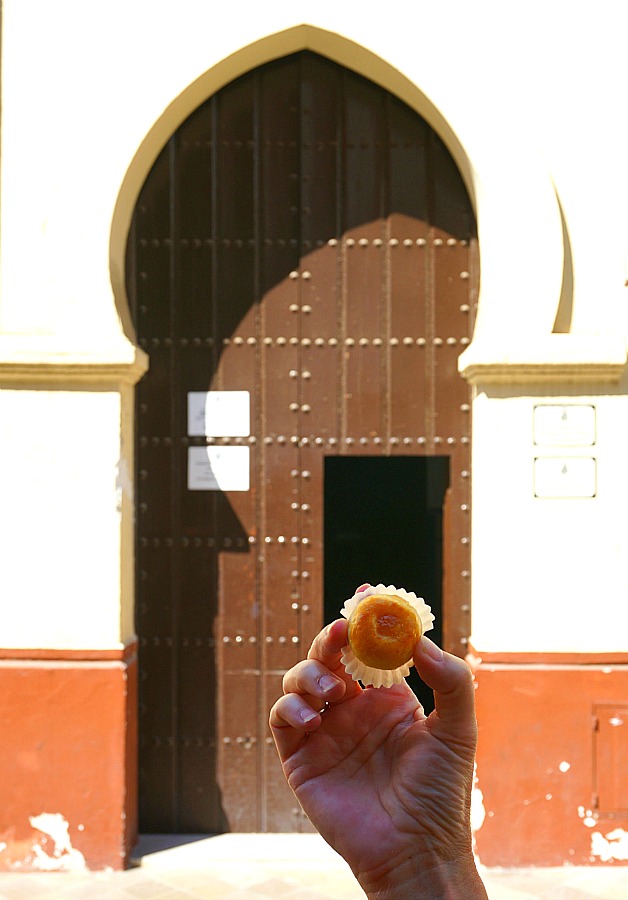 We were also introduced to another local favorite – fried fish and chips (Sevillanos LOVE fried food) paired with a local sherry.  To quote Maria, in the north, they boil, in the center they grill, in the south, we fry. 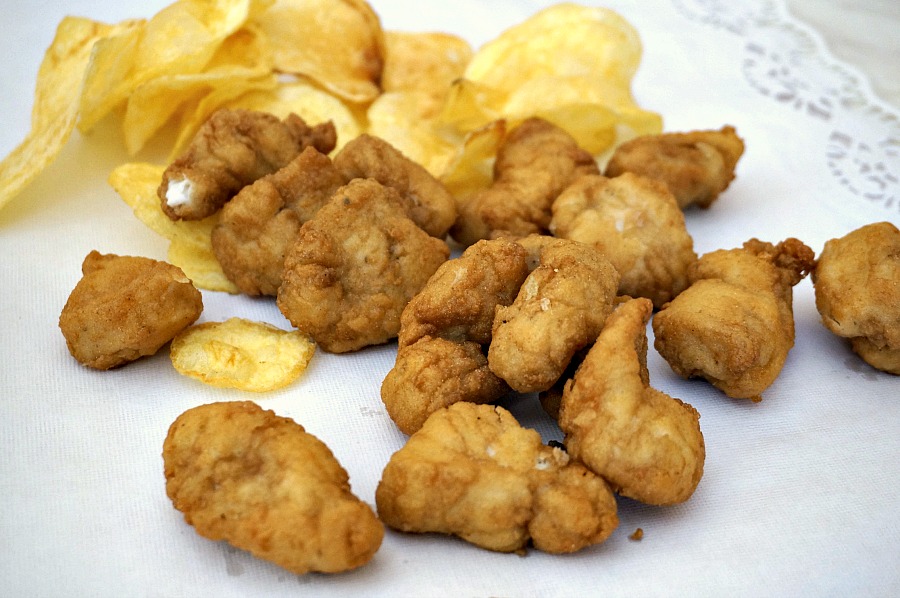 The Manzanilla sherry is very popular in Seville, most often during Santa Semana and the Spring Fair. The taste is very unusual, partially due to the heavy amount of yeast formed during the fermentation process. We recognized the flavor in many dishes that we sampled during our stay. Not everyone was a fan of the drink, but it’s something that must be tried while in Seville! 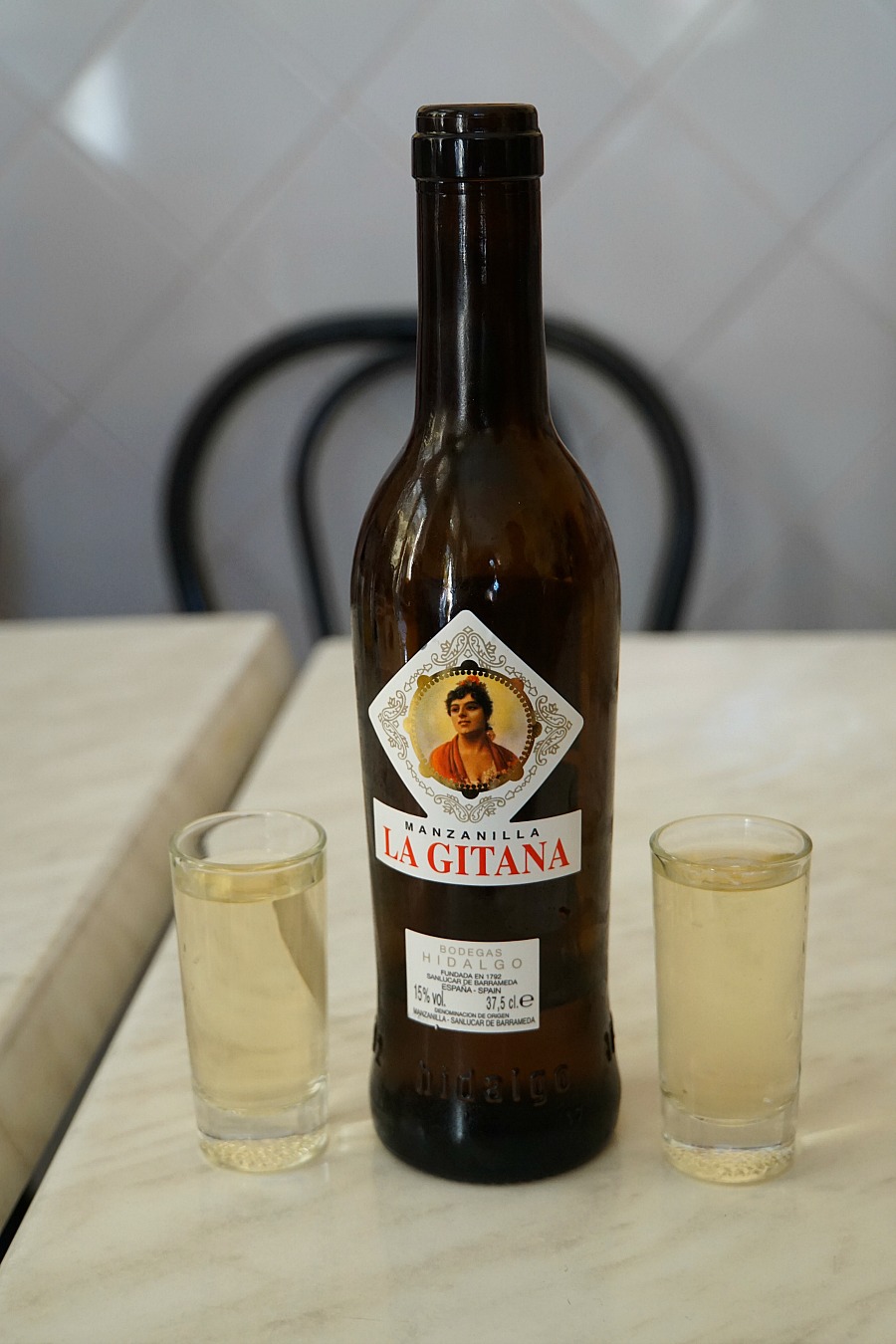 Along the way we visited by some of Seville’s on and off the beaten track tourist attractions, such as these columns located on a hidden side street, which are some of the oldest relics in Seville from Roman times. Two additional columns from what was left of the temple were moved to the Alameda de Hercules in 1574, where they remain today. We also wandered by the beautiful Seville Cathedral (or Cathedral of St. Mary) that dominates the city center and made a mental note to return. 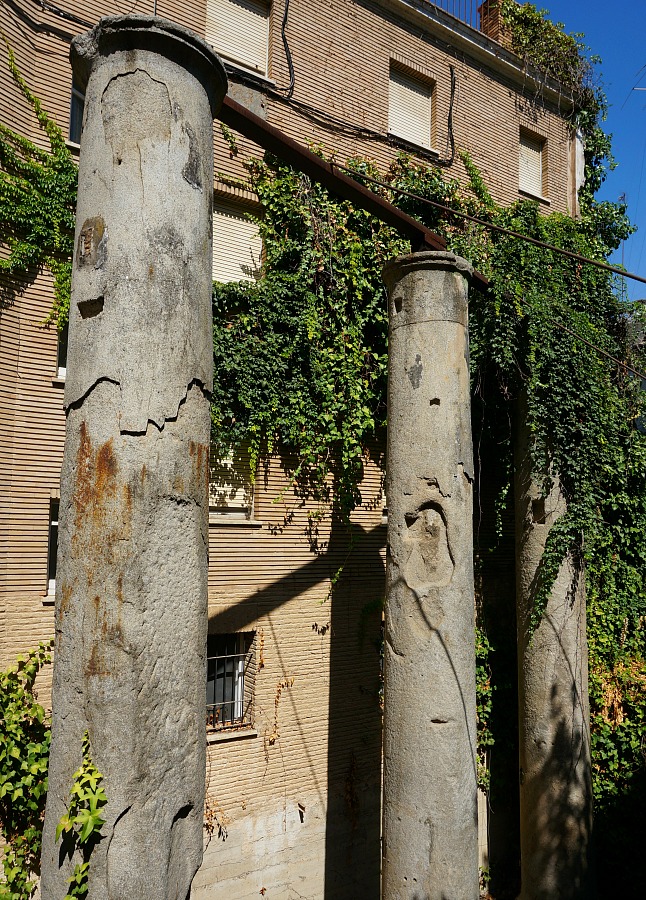 We also learned that there are also some amazing ruins from Roman times that are located about 6 miles (10 kilometer) from Seville in the city of Italica. These sites are considered some of the best preserved in Spain, and are often overlooked by tourists. We intend not to repeat their mistake. 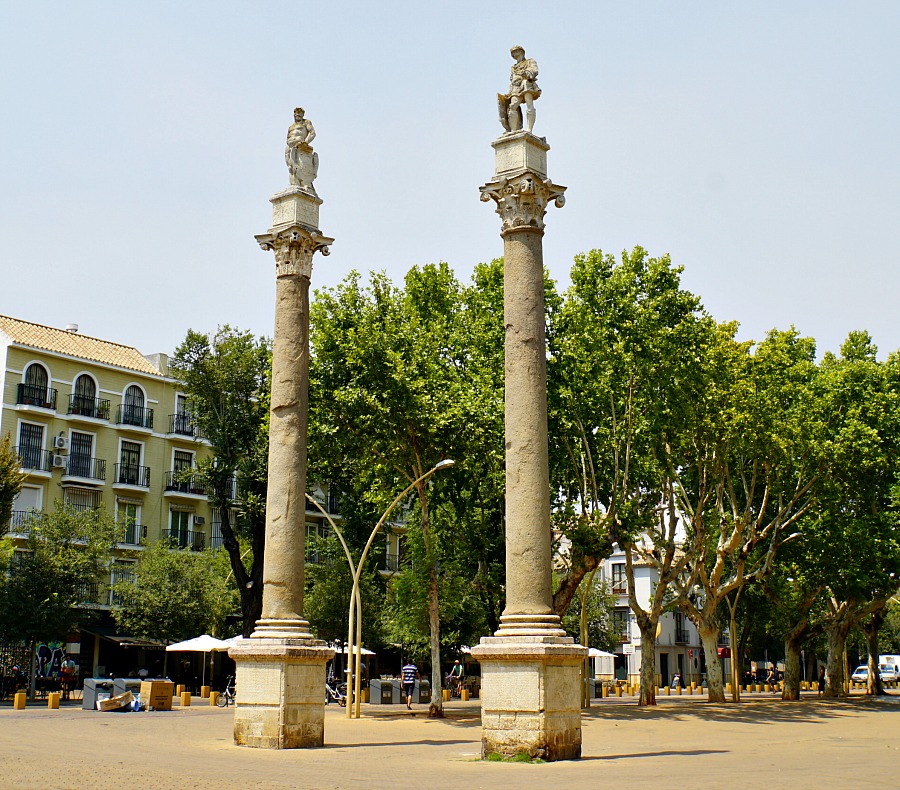 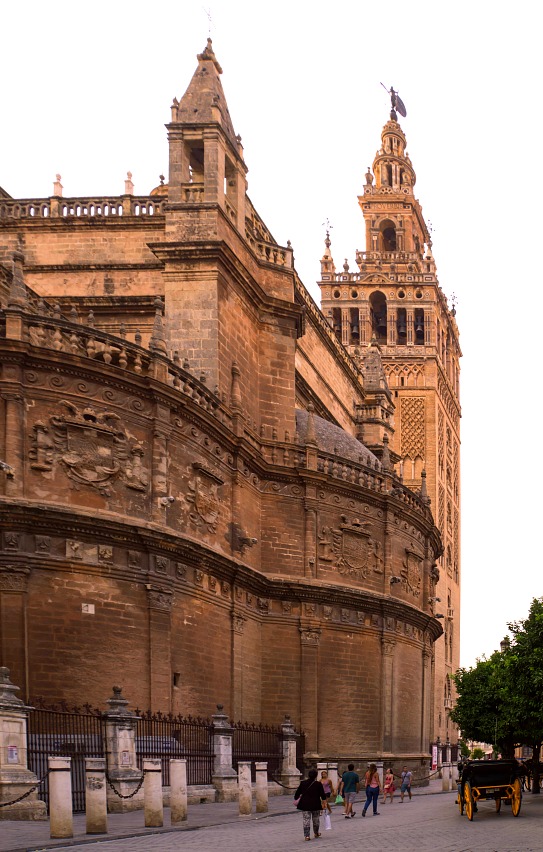 We finished up with a dish of ice cream (what, not gelato?) in Seville’s most famous creamery. They are the best-loved because of their creative use of local ingredients. Some of our favorite flavors were Blossom of Azahar (orange blossoms), Dulce de Pestiño, (a fried dough pastry popular during Christmas), and Dark Chocolate with Candied Orange. 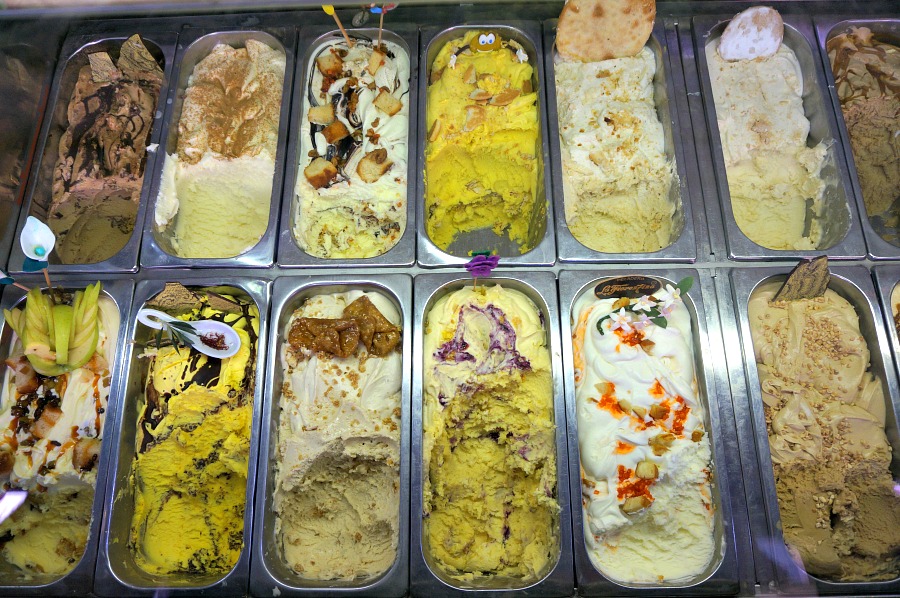 We left Maria and our group, quite full both in terms of our stomachs and of many ideas of what we wanted to do and eat. Being introduced by a local was the perfect way to start our trip to Seville. And if you go, take Maria’s last piece of advice and find a locals bar where food is served at the bar and enjoyed while standing. Then you can celebrate knowing a journey into an authentic Sevillano experience has officially begun! 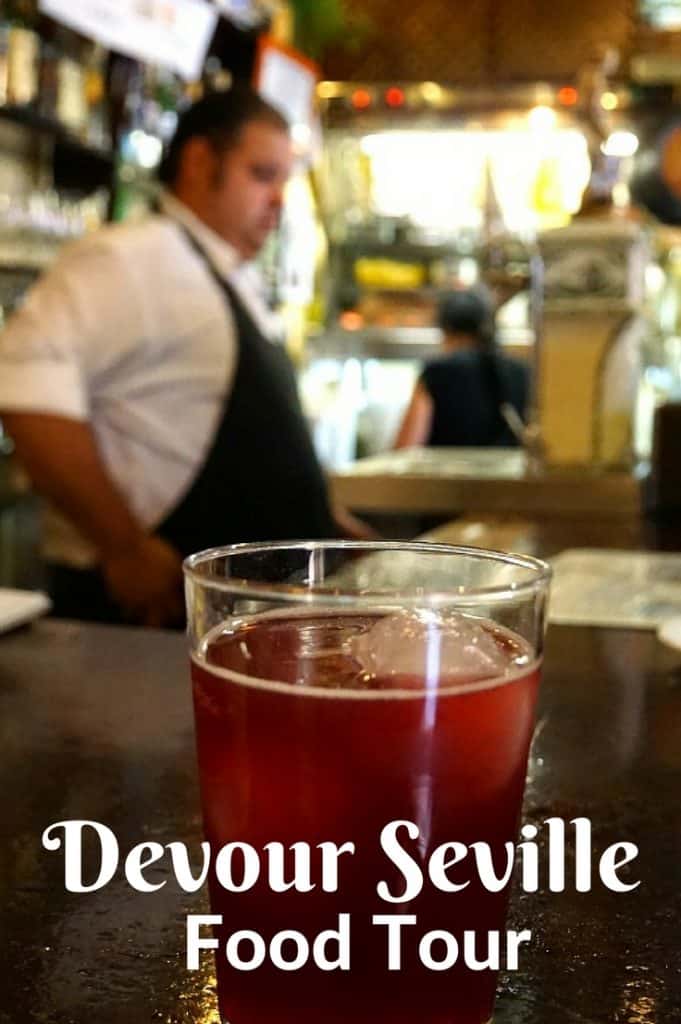 Contact Devour Seville to find out more about the food and cultural experiences they offer.

You Should “Devour Barcelona”

Whereto Eat in Rome? In the Kitchen – Cooking With Nonna

Thank you to Devour Tours for hosting us on this tour, our thoughts and our opinions remain our own.