A visit to Cappadocia Turkey is like nothing you have experienced anywhere else in the world. Here you will find a lunar-like landscape covered in fairy chimneys, underground cities, food cooked in wood-fired ovens, and amazing Turkish hospitality. We’ve listed our picks of the top things to do in Cappadocia Turkey that may very well inspire you to plan a visit yourself.

Become Mesmerized with The Fairy Chimneys

Cappadocia, particularly in the Göreme Region, has one of the most fascinating landscapes you will encounter. It is a huge barren area covered in large stone formations known as fairy chimneys. Millions of years ago the area was covered by volcanic ash. Massive erosion resulted in the remaining hardened stone pillars that characterize the area.

And the best way to see them is by engaging in the activity that Cappadocia also famous for – hot air balloon rides.

On most mornings, depending on the conditions, you wake in Cappadocia to the whooshing sound of air being heated in order to make dozens of balloons aloft. The view, by any account, is awe-inspiring. There are several companies in the area that will happily host you on a ride, with tour options ranging from private to large balloons where you can make up to 24 close friends. 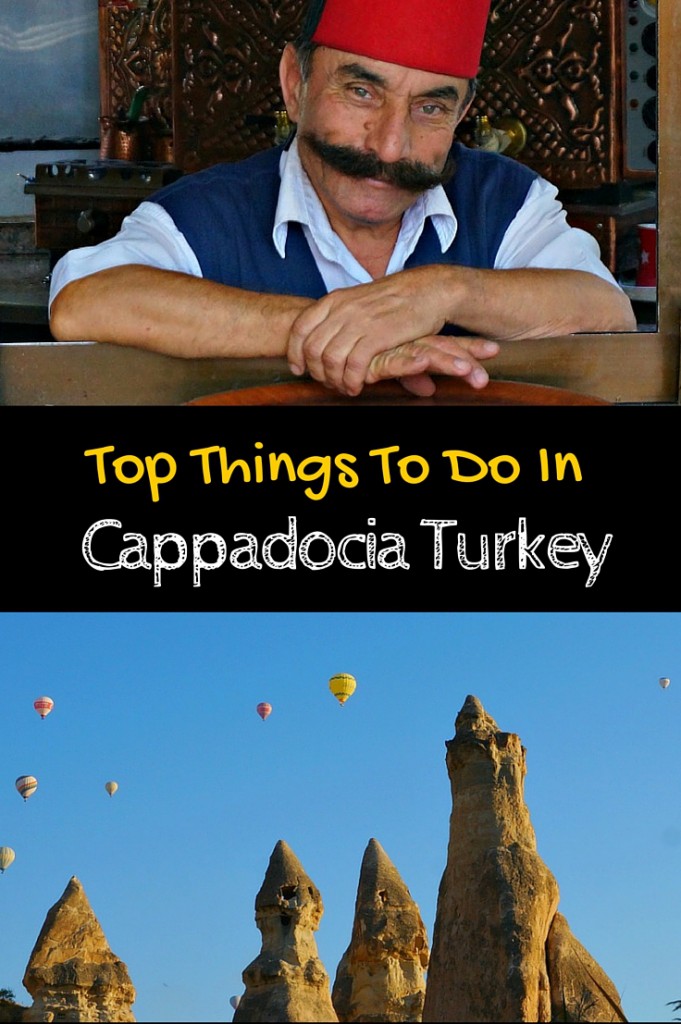 The clay pot kebab is actually not a the skewered meat cooked on a grill that is likely more familiar. It is actually a stew, frequently with lamb or chicken, cooked in a clay pot. The pots can be sealed or covered in dough that rises and creates a bread crust while the pot steams away in a wood fired oven.

The stew is quite simple, often with tomato, peppers, onion, garlic and a few spices. It is then served table side and cracked open in a showy flourish and then upended over rice. It’s one of those things that you just have to try while you are in the area – oh and it is really good. Particularly with a side of crusty freshly baked bread, maybe a little yogurt sauce and some salad. You get the idea.

With a sturdy pair of hiking boots and a little determination, you can visit quite a few of the best sights in Cappadocia for free. Pigeon, Rose and Love Valley (so named because of the phallic shaped fairy chimneys) are some of the most popular. You can find detailed information to help you plan your hike, including joining a tour or hiring a guide, at the tourist information centers or by inquiring at your hotel. Most of them will happily supply you with a map and send you off on your way.

Looking at the scenery, it isn’t too surprising that Cappadocia is known for its pottery. The barren landscape is a wonderful source for the area’s characteristic red clay. You can find rustic versions, such as the type used to cook up your clay pot kebab, and intricately designed hand-painted pottery that has been produced in Turkey for Centuries. The lovely designed earthware in characteristic blue, white and red beg for a small corner of your luggage.

Enjoy the Panoramic View at Esentepe

The road winding from the towns of Göreme and  Uchisar has a view point (Esentepe), not to be missed during your visit to Cappadocia. Here you will find a line of shops selling typical souvenirs from the region, such as textiles, pottery, jewelry, and of course, mini versions of the fairy chimneys that you can bring home and show off to your friends. But the star of the show here is the sweeping view. Hint – if you decide not to ride in a balloon, you can still get a great view of the show in the morning sky from here.

Get The Turkish Evil Eye

The evil eye has become a symbol of protection, particularly against glares from malevolent others, that you will find throughout Turkey. The glass “eye” or nazar,  can be found on rear view mirrors, hanging in homes, in jewelry and even pinned to babies. They are everywhere. But my favorite place to find them was hanging on a tree on the panoramic view in Esentepe overlooking Göreme Valley.

Explore the inside of the Cappadocia Fairy Chimneys by visiting the Open Air Museum in Göreme. Here you can crawl through dwellings and churches that date back to the 10th century. Some of them still have remnants of frescos painted on the interior of the structures walls. The museum was actually one of the first two Turkish sites that gained acceptance as a UNESCO world heritage site, which it earned in 1984.

Take in a Beautiful Turkish Sunset 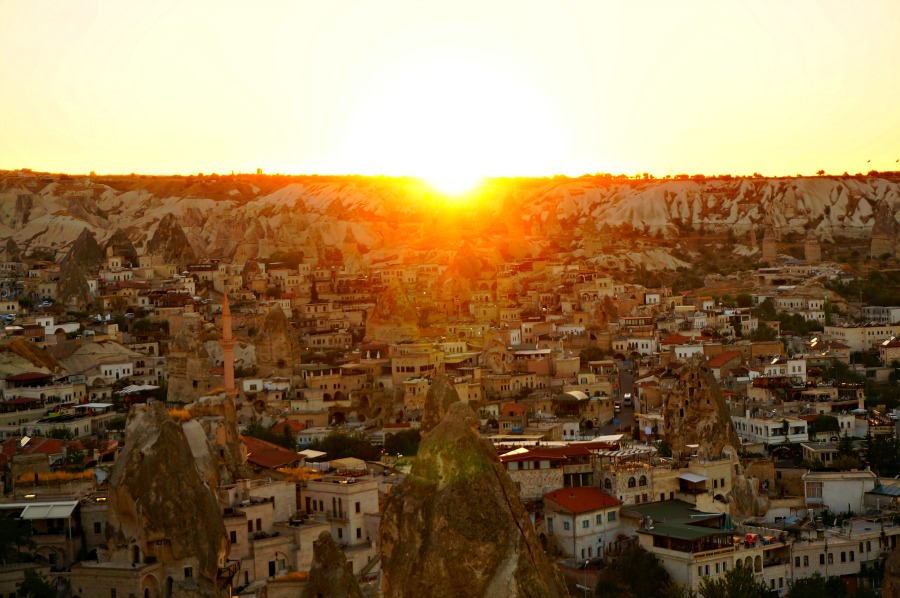 If you a sucker for a gorgeous sunset, Göreme is the place for you. There is an overlook area where you can get a ring seat for the evening show.  Hike up the path, find a spot to snuggle with someone special, and watch the sun make its decent. As the sky becomes dark the restaurants below start to fire up their barbecues, tempting you to climb down from your perch. Not a bad way to savor the end of the day by any measure.

Manti are miniature ravioli that are said to have their origins in Chinese dumplings. The are typically filled with minced lamb or beef mixed with pepper and other spices and served with a yogurt and garlic sauce. In Cappadocia, manti are traditionally prepared by a woman for her mother-in-law to be. The smaller the dumpling she is able to prepare, the better her skills in the kitchen. The standard is to make them small enough to fit 40 on a single spoon.

There are several ways that you can tour Cappadocia. You’ll find jeep tours, hiking tours, bus tours, balloon tours, and plenty of people that will cart you around by horse and buggy. But for comprehensive day tours there are actually a few standardized tours to choose from – all of them the same no matter who is offering them.

The main ones are the Green Tour, which visits the Göreme Panorama, Derinkuyu (underground City) and the Ihlara Valley. The Red Tour, which takes you to the Göreme Open Air Musuem, The Cavusin Old Village, and the Avanos Pottery Demonstration, and to see several areas known for Fairy Chimneys. The Blue Tour will take you through Ortahisar Castle, Fairy Chimney viewing, and to the Kaymakli Underground City.

The tours run between 100 and 120 TL. And if you’re looking for some night-time fun, you can also book yourself into a Whirling Dervish Show to see some fancy twirling and eat a mediocre Turkish buffet. Ah why not? Honestly, if you’re looking for wild nightlife during your time in Cappadocia, you’ve probably come to the wrong place.

When I first came across a shisha, (also known as a hooka or nargile pipe), I wondered, “what are they smoking?” And you may be asking the same. As it turns out, in Turkey the only thing intoxicating in the shisha water pipe is actually the aroma it emits. Various forms of fruit scented coals can be purchased and set up in a small chamber, and then brought to your table to enjoy.

Smoking a shisha is actually a group sport, meant to be savored for as long as it takes for the tobacco to run out (about 1 – 2 hours). So grab a few friends, a few beers or Turkish tea, pull up a bean bag chair and enjoy the vibe.

Visit The Grand Canyon of Turkey

One thing I didn’t expect to find when visiting Cappadocia was the Grand Canyon’s cousin, located in the Ihlera Valley. After a short climb down a series of stairs, you can hike in a mostly shaded canyon overlooking a babbling stream. Here you can also visit ancient churches cut into the canyon walls, some with frescos still decorating their interiors.

There are numerous caves cut into the canyon walls that were once home to over 8,000 citizens. If you look closely you can find small arch shaped shelves, or pigeon holes, made to encourage nesting of these helpful message-carrying and fertilizer-producing birds.

Ok, maybe more of a tour than a ride. You can find many Turkish carpet stores in Cappadocia, but it is difficult to know which are selling the real deal. We suggest taking a tour of a carpet store where you can see an actual carpet being made. The patterns, including the color and material, are dictated by the village where each woman weaving the carpet was raised.

Each girl in the village is taught how the make the pattern by her mother, and the art is passed down over the generations. Carpets are actually produced not in a factory but by the woman in her home. In the factory demonstrations, women are scheduled to come in on a rotating basis. Seeing the carpet being made, one double knot at a time, is mind boggling.

Wine has being produced in Turkey since 4000 B.C. and Turkey is known as one of the oldest winemaking regions in the world. So if you have a love of the grape, you won’t be disappointed in Cappadocia. There are six major wine making regions in the area that give you plenty of opportunity to sample. There are several companies that offer wine tasting tours of the area.

Urban Adventures offers an alternative tour that allows you to combine visiting a winery, taking a hike to view the rock formations, and ending with a view of the sunset while enjoying a glass of the local vino. Cheers to that!

There are several underground beehive-like structures beneath Cappadocia. The largest was actually discovered in 2014 and is said to be big enough to house 20,000 people. The cities have been in use for centuries but were expanded and utilized most in the 2nd and 3rd centuries during the Roman persecution of the Christians.

One look at the narrow passageways and huge stone doorways used to block them, where people spent 6 months at a time, give you a clue into the fear and desperation of the people who built them. They eventually became obsolete during times of peace and were used primarily as storage areas.

In the 1960’s the vastness of the underground areas was rediscovered by a German archaeologist. Some of the cities have since opened to the public, and a wander through them is an awakening experience. But if you do go, head out early – they are quite popular and and become crowded.

Even with all of the wondrous things there are in Cappadocia, one of the best things to do here is strike up a conversation with a local. We found lots of colorful and interesting people that make Cappadocia their home. If you take some time on your travels and ask a few questions while you enjoy some of the hospitality that Turkey is famous for, you may just get your best memory from your time here. 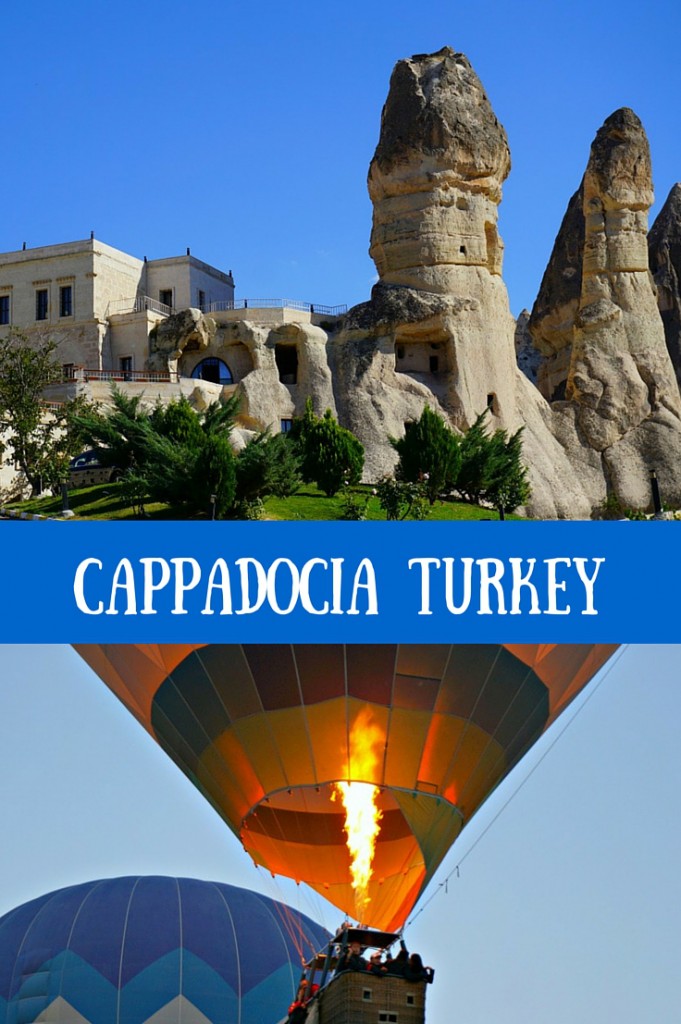