Catania, Sicily is the second largest city in Sicily, an Italian island just off the “toe” of Italy’s “boot.” It is situated on the east coast between the notorious Mount Etna and the Ionian Sea. A deep-rooted history, rich culture, and some of Europe’s most fascinating architectural structures combine to ensure there is never of shortage of things to do in Catania.

Catania sits atop the ancient cities that came before it; its roots are literally built on past civilizations destroyed by the volcanic eruptions of Mount Etna. The stark contrast between the centuries-old ruins still seen within the city and the modern-day urbanization is one of Catania’s most unique features. 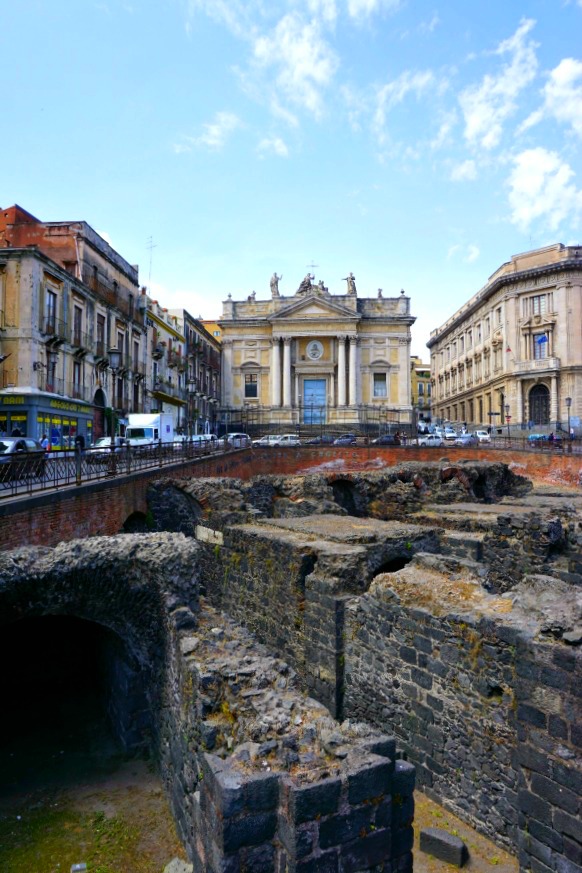 Remains of a Roman Amphitheater and the S. Biagio Church

No matter what your interests are, there are many attractive aspects of Catania. From trendy shopping to a lively nightlife, from historical sight-seeing to traditional dining, to the gorgeous vistas and surrounding countryside – there is something to entertain every traveler.

Catania is perhaps most renowned for its Baroque churches and buildings. Baroque is a Sicilian-born architectural style defined by eccentric design and ornate detail. Countless examples of this historically characteristic art form can be seen throughout the city. 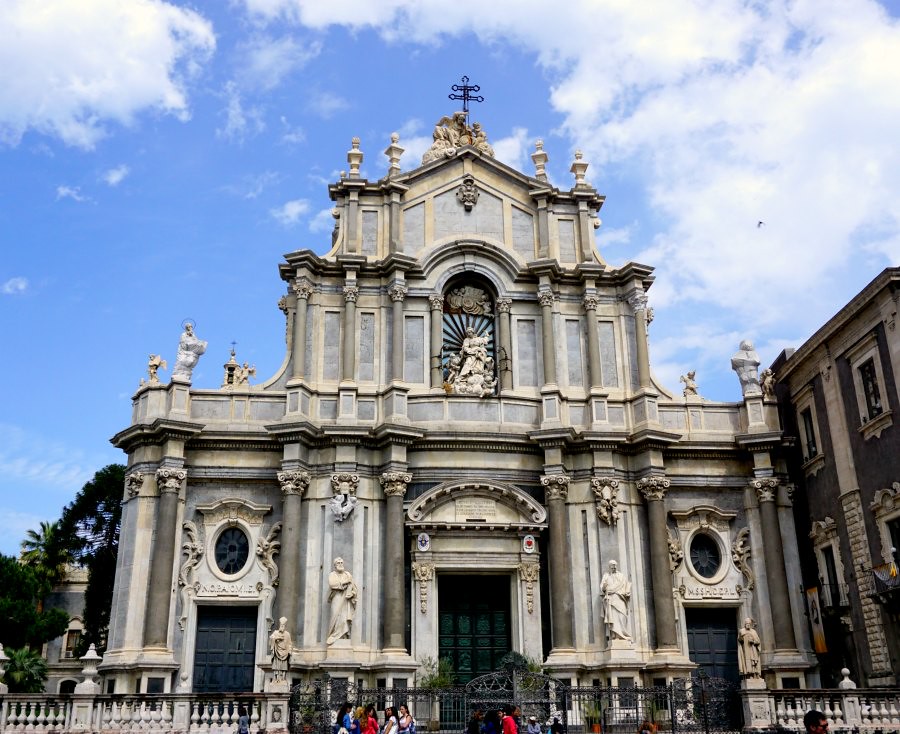 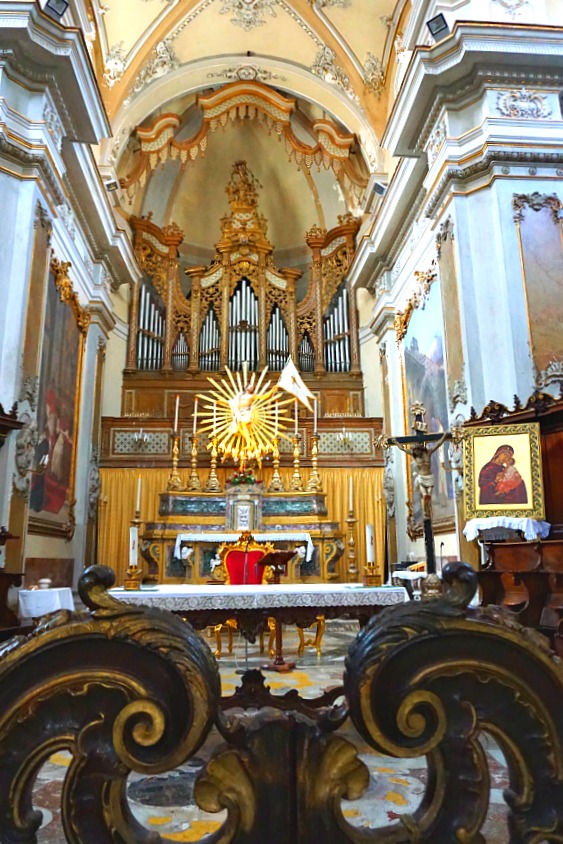 This UNESCO World Heritage Site is not to be missed. Piazza del Duomo is the city center and home to the famous Fontana dell’Elefante. Made entirely from black lava stone, the statue is known locally as u Liotru and is the symbol of the city. 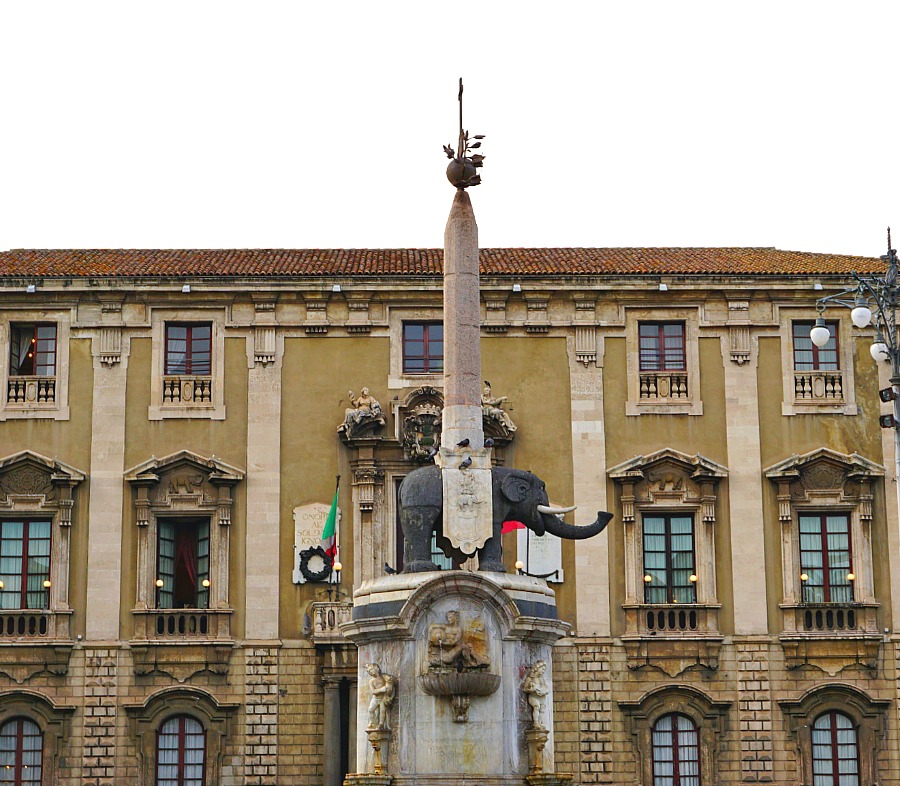 The piazza is a gorgeous sight in its’ own right. The striking white limestone buildings against the black lava sculptures makes this piazza one of a kind. In addition, several fountains, historic Baroque style buildings and the beautiful Cattedrale di Sant’Agata frame the square. 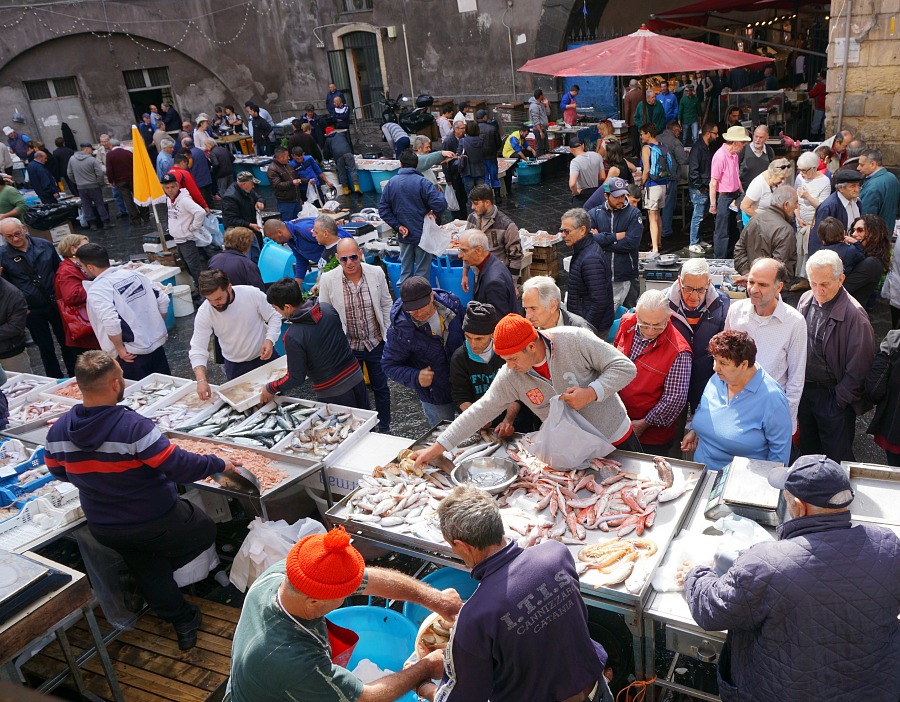 For a peek into some genuine Italian culture, a stop by the local fish market is a must. La Pescheria is set up just behind Piazza del Duomo every morning and provides an entertaining glimpse at the where some of Catania’s tastiest dishes get their start.

The electric atmosphere makes this an exciting place to explore while also providing some great people watching. After walking around, grab a bite to eat at any one of the fresh seafood restaurants lining the marketplace.

Don’t forget to check out the side streets branching off from La Pescheria; you will find a plethora of smaller markets selling fresh fruits, vegetables, dried nuts, meats, cheeses and spices. 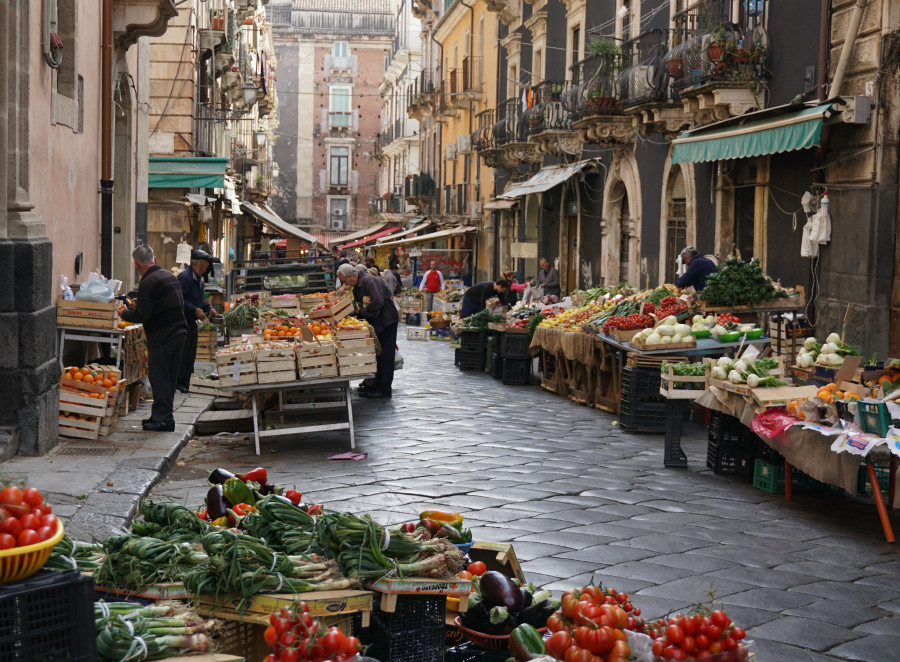 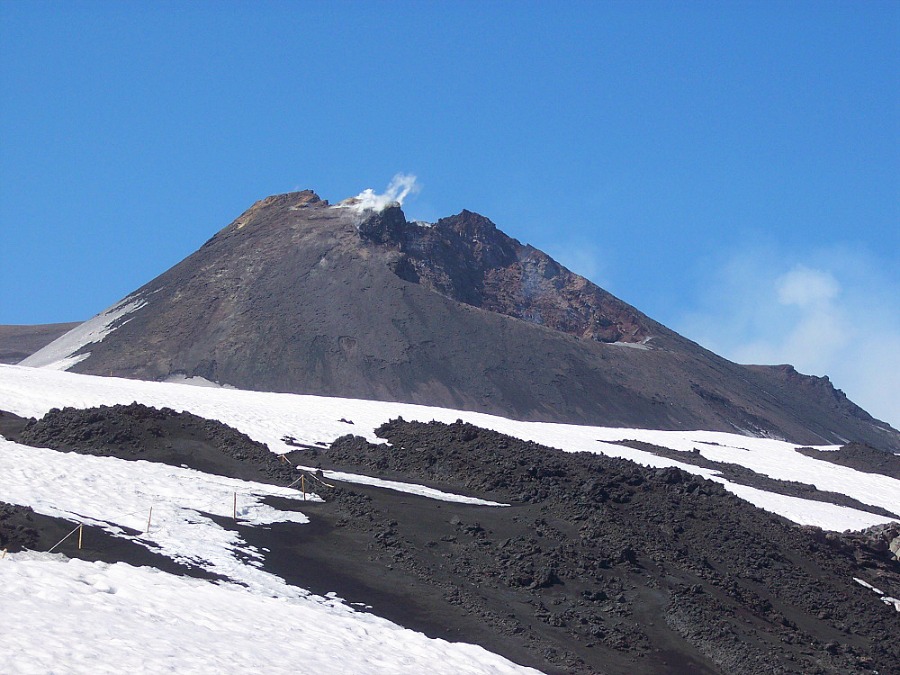 No trip to Catania is complete without a tour of the iconic Mount Etna, the highest active volcano in Europe. The volcanic mountain hangs formidably over the city, and although history has shown just how destructive Etna can be, the people of Catania also benefit from its presence.

Mount Etna has been a curse over Catania for thousands of years. The volcano has erupted a total of seventeen times throughout history. The spewing lava and ash has fossilized many past civilizations, forcing the Catanese to rebuild time and time again.

On the flip side, the breakdown of lava from past eruptions makes extremely fertile soil. For this reason, vineyards, olive groves and orchards flourish and farmers can make an ample living.

Many different tours of Mount Etna are available daily. Half day and full day trekking tours are offered, as well as wine tasting tours and lava cave explorations. Free samplings of local products, like honey, olive oil and wine are included!

Sip some genuine Italian wine, enjoy the scenic countryside and prepare to be impressed by the sprawling views.

For those itching to splurge, helicopter tours of Mount Etna are available, presenting dramatic views of the summit craters. 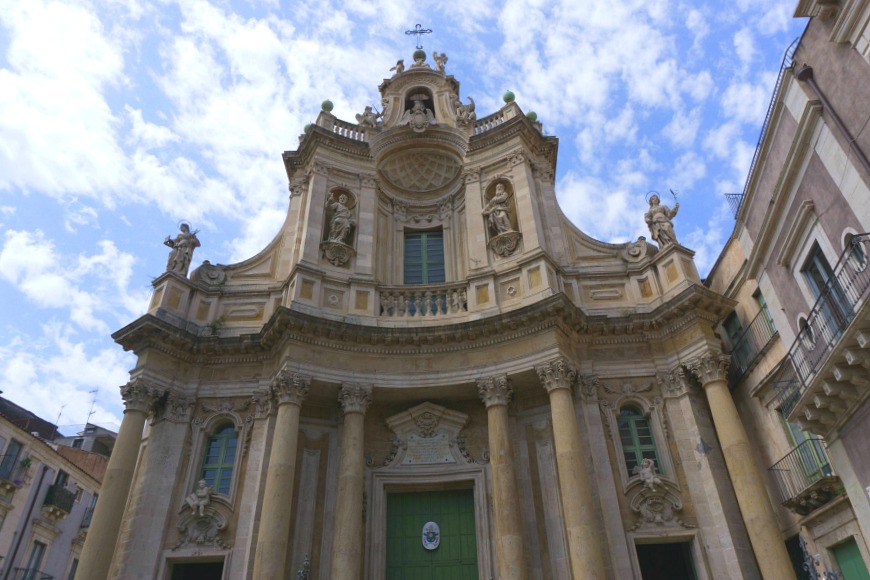 Located within walking distance of Piazza del Duomo is the famous Teatro Massimo Bellini opera house. Built in 1890 for Italian composer Vincenzo Bellini, the marble building is an excellent example of Sicilian Baroque.

It’s recommended to book in advance if you want to catch a performance here, as they quickly sell out. If the opera isn’t for you, the day tour is worth the few Euros to see the inside of this magnificent building.

Piazza del Duomo also serves as the entrance to Via Etna, the busiest shopping street in Catania. The main drag is lined with shops, restaurants and cafes. This is a popular street with the locals as well, and become even more lively in the evening time.

Indulge – ala the Catanese 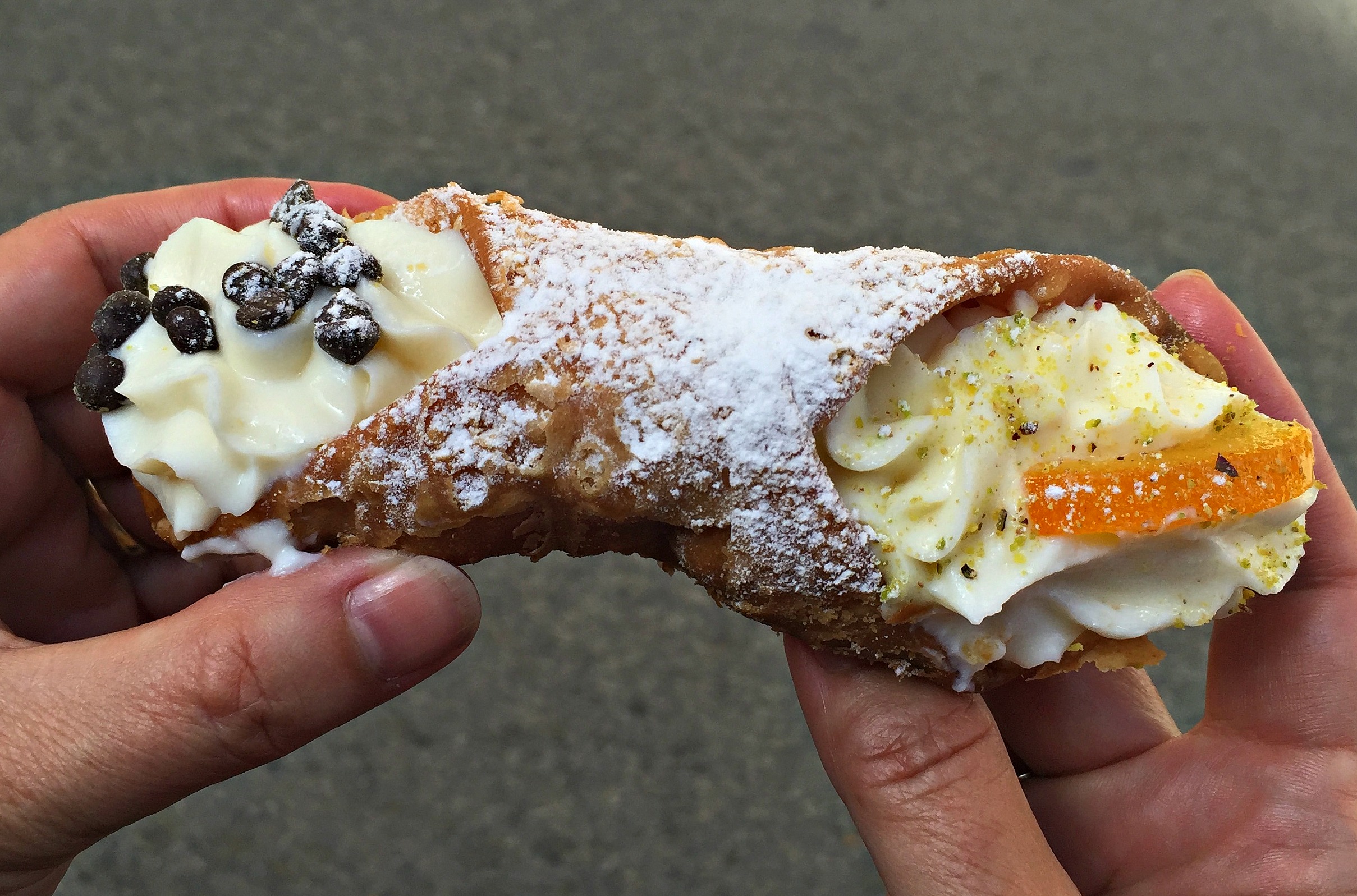 Like many places in Italy, one of Catania’s claims to fame is their delicious traditional Italian food. Catania is known for several pastas and pastries that are popular with the locals and tourists alike.

Don’t leave Catania without trying the Pasta Alla Norma. One bite of macaroni pasta topped with tomato sauce, grilled eggplant, grated cheese and fresh basil and you’ll quickly understand why this dish is the city’s specialty.

For dessert, indulge in a Cannolo alla Ricotto. Flaky pastry and a rich, thick filling has made this Catania cannolo a world-famous delight.

Catania Fontanarossa Airport is conveniently located 7 km outside the city center. This airport is the busiest transportation hub in Sicily and serves as a gateway to other desirable destinations in Italy.

If you wish to travel within the country, you can catch direct flights from Fontanarossa to Rome, Bologna, Naples and Milan. International flights to London, Paris, Malta and multiple locations in Germany are also available.

Be Aware Before You Go 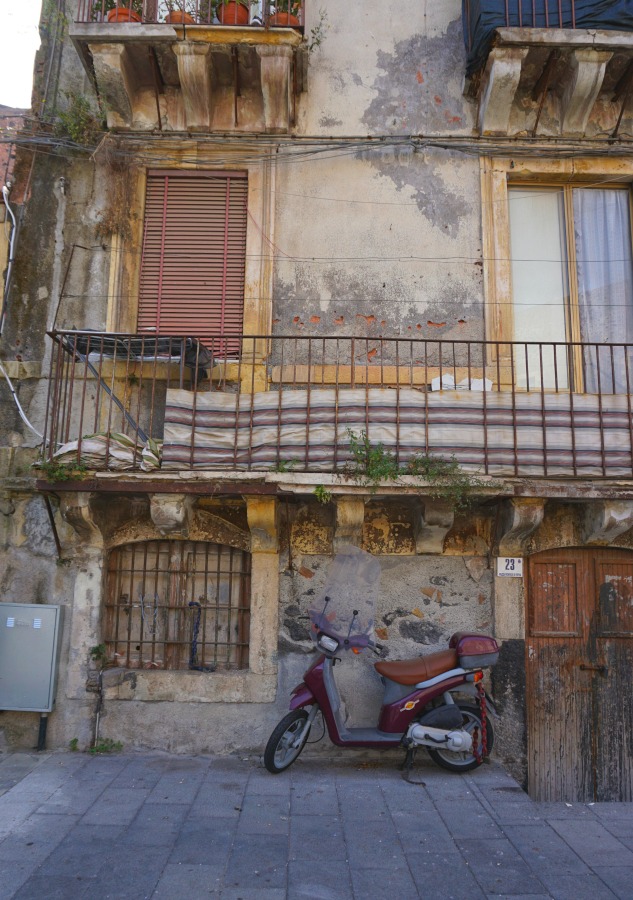 Is Catania safe? The short answer is yes, if you use common sense.

Stay alert and watch out for petty street crimes, such as purse snatching. Keep your bag positioned on the side of your body closest to shops or restaurants, farthest from the flow of traffic. There have been incidents of scooter drivers grabbing bags right off a person as they zoom by.

Don’t walk alone late at night. If you must, choose busy and well-lit streets; stay away from the smaller, winding alleyways.

Sicily has a reputation as one of the “Mafioso” or organized crime capitals of Italy, although this is not something tourists visiting the country will have to contend with.

Traffic is known to get a little crazy here, so it’s advisable not to rent a car or drive around yourself. Taxis are readily available, however traffic jams will often slow your journey down. Setting out on foot is your best bet. Once in the city center most of the attractions are within walking distance of one another.

Catania offers the visitor a heavy dose of Italian culture and history along with all the class and luxury of a contemporary city. Catania attractions are well suited for foodies, history-buffs and the shopping-obsessed. Most everyone will find something to strike their fancy. Easily accessible from the rest of Europe, Catania is a great place for a jet-setting getaway.

Inspired? Pin it for later! 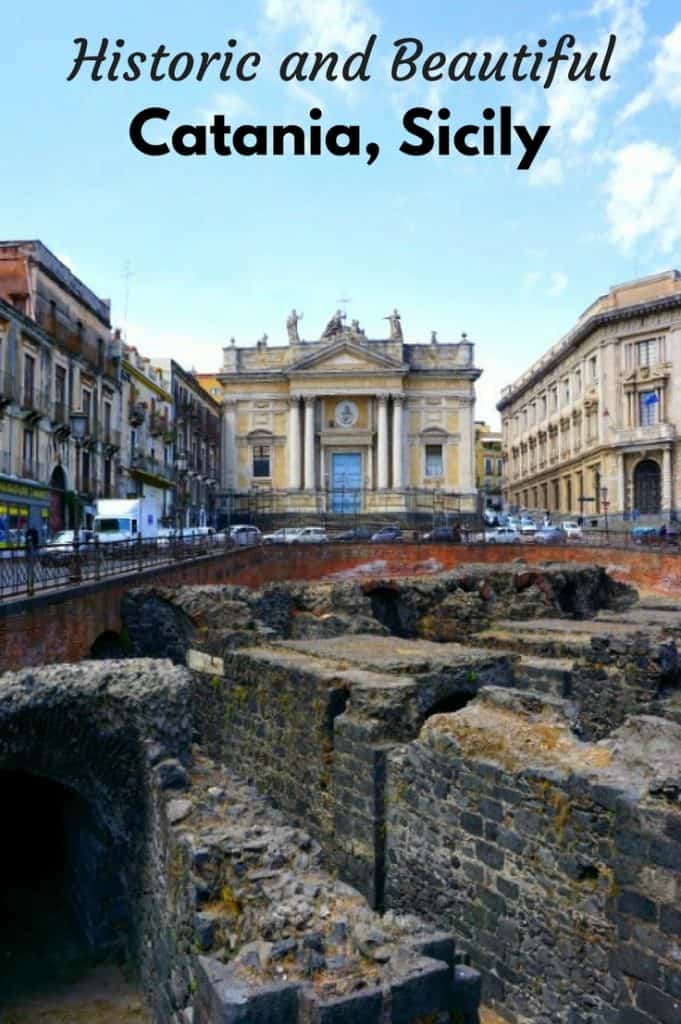 Additional articles about travel in Sicily that you might enjoy: Catania is somewhere I had never heard of, it looks well wort visiting

We have great memories of visiting Catania a few years ago during the end of April. While it was cool, but pleasant, many women were still wearing heavy coats and even furs!. On our trip up to Mount Aetna - the last stretch with one of those special 4 wheel drive vehicles - it was freezing cold and we had to use all our clothing layers. While the ski lift was not running any more, there were still skiers climbing up for a last run!

It is always fun to visit towns that have a lot of history. I haven't heard about Catania previoulsy, but it looks really beautiful on your photos. :)