If you are an adventurous traveler in Spain, willing to venture a mere 2 hours outside of Barcelona, you will be treated to an intimate view of Solsona. There you will learn about the mysteries of the city and its legends, which will take you from the bottom of a forgotten church well to the top of the bell tower (almost). And you will understand why the people of Solsona are proudly known as the Matarrucs – the donkey killers.

Solsona is part of Catalonia, Spain in the province of Lleida. It is a walled city with a population of about 9,000 persons. A walk through past the old walls will reveal the Old Town (Nucli antic) with its narrow streets and charm, where you can begin to learn the secrets of this historic city.

Around every corner you can find interesting architectural elements that add the mystery and charm.

But some of the best viewing is finding the little details as you walk through the area, such as the carved wooden beams that have decorated the eves of building for over 500  years.

One of those historic beams has become the center of a legend in Solsona and has made it famous throughout the region. According to the legend, many years ago the townspeople decided to hoist a hungry donkey to the top of the bell tower so it could enjoy the fresh grass growing there.

Unfortunately for all involved, the method they employed was tying a rope around the donkey’s neck and hoisting it up. When the donkey almost reached the top, it let go of its bladder – a sign which was initially taken by the townspeople of the donkey’s joy at seeing the rare greens. Unfortunately, that was not the case. The donkey never got to savor the tasty grass.

In commemoration, the townspeople hold a festival each year where they hoist a paper maché donkey up the tower from which a large dose of water is intermittently dispensed on passers-by via a hose.

The spectacle was televised one year and brought a number of animal activists to the area to protect the livestock from this abominable sport. They were assured that no live donkey was actually hurt during the ritual (at least not recently). Any excuse for a party!

The other claim to fame of the town is housed in the Cathedral of Santa Maria de Solsana. In the courtyard of the church is a deep well that was once used to hide religious icons and statues from invading enemies.

According to another legend, a boy was once playing in the courtyard and fell down the well. When he was finally lifted to safety he reported that he was not alone in the well.

A female figure, he said, put her arms around him and comforted him until his rescue. The townspeople went down into the well and recovered a long-forgotten statue of a black Madonna. And not just any black Madonna.

This one is one of the most detailed and best preserved Madonnas in the world. It’s now housed in the church itself and remains an icon and evidence for the people of Solsona of the occurrence of a miracle.

So Solsona offers up a picturesque setting, a festival with a donkey, and a miracle. And just to inch it a little higher on the must visit scale, fantastic food.

The Mare De La Font Restaurant in located on the outskirts of Solsona in a tranquil out-of-the-way park environment. But while the setting may be serene, the food is anything but. The flavors here are traditional and bold.

We were treated to a tasting menu here where we were able to sample delicate starters with local fresh greens, seasonal fruits and Spanish ham. We were also treated to main dishes, such as a pizza piled with fresh roasted peppers paired with gorgonzola cheese, to a locally sourced beef hamburger overstuffed with cheese. The meal finished off with freshly made dark chocolate truffles handmade in-house. It was as good, maybe even a little better, than our pictures of the experience.

Related articles about travel in Spain that may help inspire or plan your Spanish holiday:

Don’t forget to pin or bookmark this post for later! 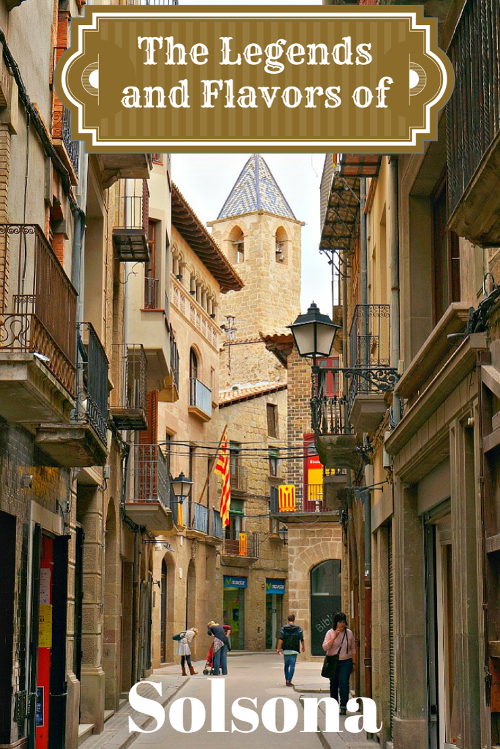 Thank you to Contrast Trip Travel Agency for introducing us to the area. While our time in the Pyrenees was sponsored by the tour company and the Lleida Board of Tourism, our opinions and our stories are our own. You can contact them to learn more about Solsona and planning a trip to the Pyrenees.

14 thoughts on “The Legends and Flavors of Solsona Spain”