Rome always makes me think of water. The aqueducts, feats of engineering marvel, brought water from the mountain to the ancient city long before most of the world had even imagined plumbing.

Many of the Roman aqueducts are still standing (and in many cases, working) after thousands of years.

There are the famous fountains: Trevi and the fountains in Piazza Navona to name a few. They are spectacular, and they draw the crowds to prove it. 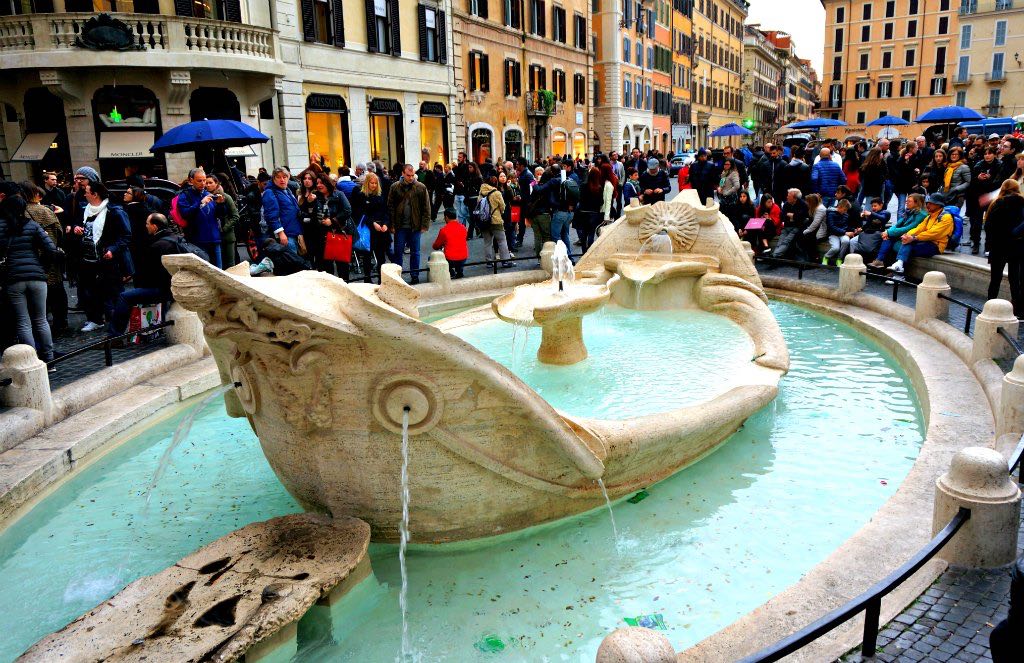 Fontana della Barcaccia – and the crowds 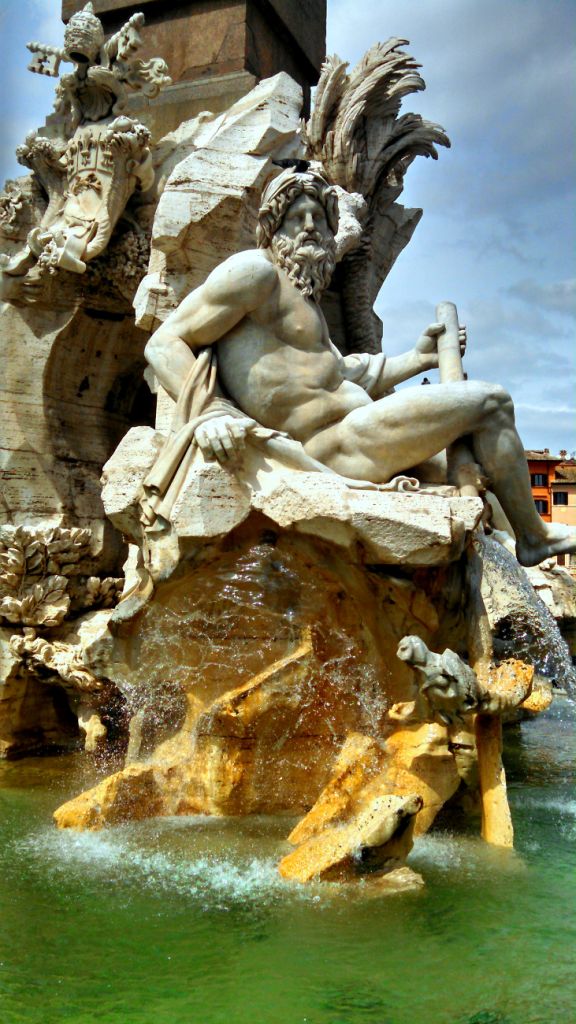 But the fountains I like most are the everyday fountains in every square, in every corner, throughout the city.

The humble drinking fountains, that are always running and have been delivering crystal clear cold drinking water to Romans since 1874.

The 2,500 drinking fountains that are scattered throughout Rome have become a point of pride and a symbol of the city.

As we travel to so many places in the world, we constantly have to think about drinking water: Is it safe to drink? Is it ok to cook with, but not to drink?

What about coffee — do I need to use bottled water for that? Do I need to pick up a big bottle before heading home?

How do I order one of those big bottles of purified water delivered, when I don’t know the language? And then, we get to Rome.

Romans pride themselves on their ability to consistently deliver clean drinking water. This is a tribute to the ancient Roman architects who created the first aqueducts to bring water to the city.

The Romans call the fountains”Nasoni” which in Italian, means “Noses”, making fun of the protruding running faucets. 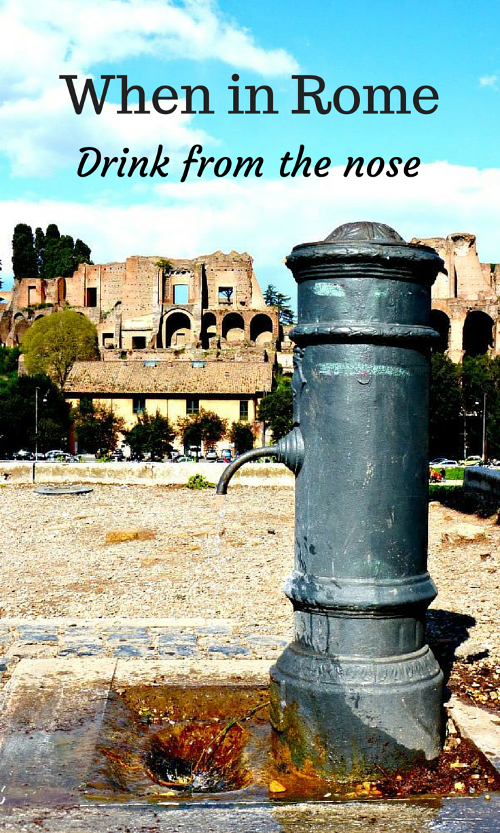 Most of these public “noses” have actually run so consistently that there is a pool of erosion below the ever spouting water, through the metal or rock on which they sit.

In today’s world of bottled water, most people will look at you in horror if you suggest drinking from a public water fountain. In Rome, though, it’s the norm — and the water is really good.

In fact, most residents of Rome will tell you not to waste 2 Euros on bottles of water, when the water from the nose is free, and just as pure. 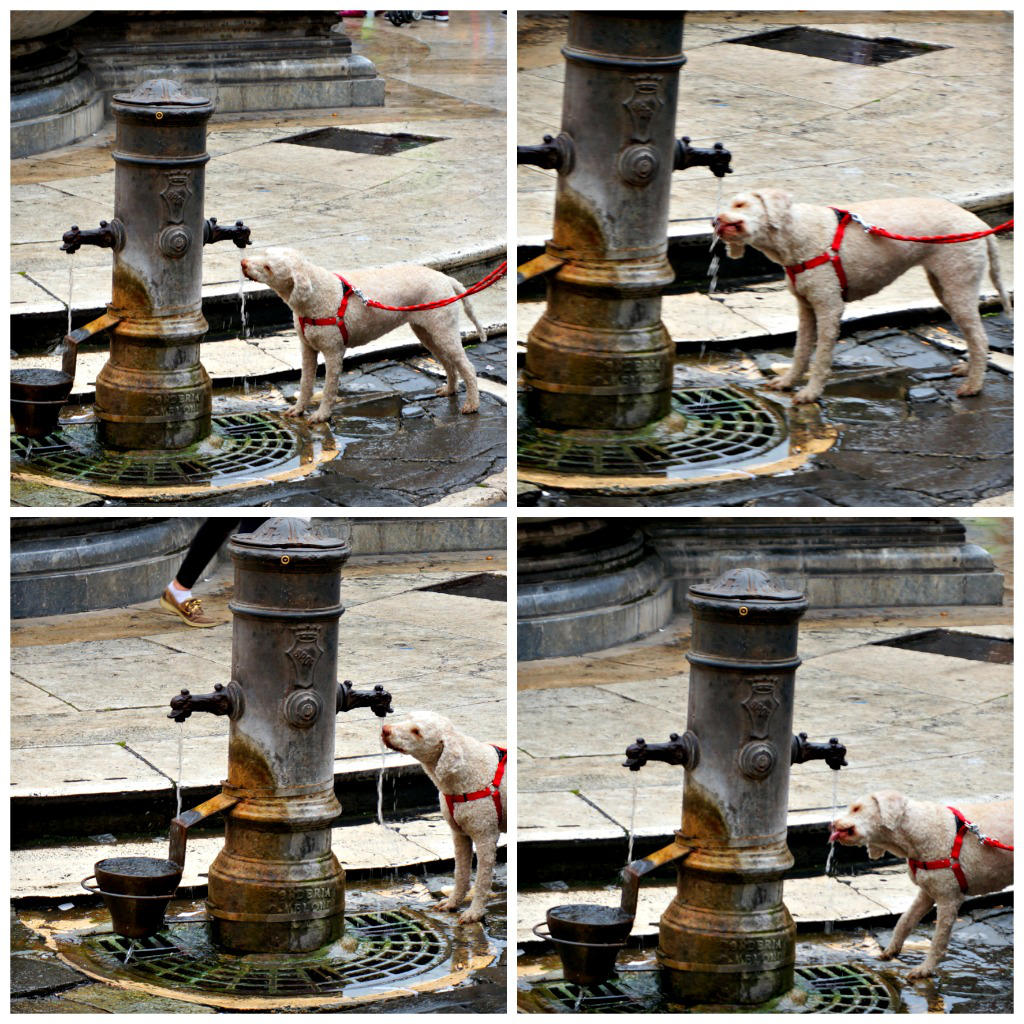 Even the four legged Romans use the fountains

If we’ve sold you on the public fountains, first some advice. Before you tilt your head upside down and take a drink, watch how the locals do it.

Each “nose” has a small hole on the top, and they will use a finger to block the downward flow of water. Viola! Water streams upward from the hole and there’s no need to be contortionists to get a drink. 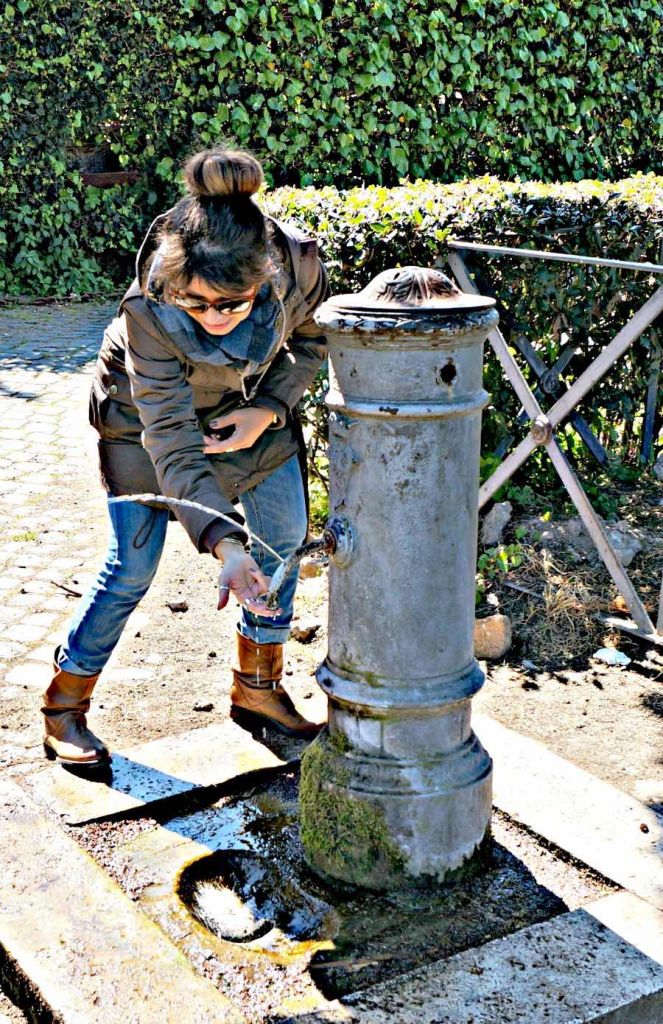 How to drink from the Nose

So, our advice: When in Rome, drink from the nose!

Here are some additional articles about things to do in Rome that you might enjoy: Rome is so wonderful! I have to book a flight here in the next week.

These are all so gorgeous! I really need to book a trip to Rome.

Hah! Finally! I've noticed the small hole on the top of the nose but never quite worked out why it's there! Probably because I've never seen anyone drinking water directly from any fountain like that.

Beautiful pictures. I was in Rome seven years ago and I loved walking around the streets and exploring the fountains. Love all the different angles you got, takes me back to my trip!

I loved the fountains in Rome. Unfortunately I did not take so many wonderful photos. Guess I just need to head back to do it again! Thanks for the reminder.