Istanbul is an expansive city with a  rich, complex history that stretches back thousands of years. It’s the only city whose boundaries lapse over two continents (Europe and Asia). But what if I told you that despite all the ground to cover, you can actually experience the very best of Istanbul, in one day? Ok, maybe one busy day.

In order to accomplish this, we put ourselves in the very capable hands of the professionals at Walks of Turkey. They promised to show us Istanbul, literally from top to bottom, and give us a taste of the best dishes in Istanbul along the way. Lofty goal, were they up to the task we wondered?

We met our guide and Istanbul native, Jasmine, in the Sultanahmet area in Istanbul. Many of the important and popular attractions in the city are right here, which made the goal just that much easier.

The Obelisk of Theodosius

We started off monoliths that adorn the park in Hippodrome Square. The one below, clearly is not of typical Turkish design. The Obelisk of Theodosius, or the Egyptian Monolith, was actually constructed in 1425 BC in Egypt. It was “re-appropriated” when Egypt was part of the Roman empire, and floated down the Nile River to what is now Istanbul by Roman Emperor Constantius in 337 AD.

While the structure itself looked relatively simple, this was a good way to begin to understand the breadth of history of this area. The fact that Jasmine was not only passionate but extremely knowledgeable was already vastly apparent. If anyone could pull off Istanbul in a day, I reasoned, it was probably her.

Next we were off to see the place I had most anticipated visiting in Istanbul – The Blue Mosque.

Sultan Ahmed Mosque, or the Blue Mosque, is one of the most visited of the over 2,000 mosques in Istanbul.  Not because of its grand size, or because it is the most beautiful mosque in Istanbul, but because of its interior. It is covered with popular blue tiles in intricate designs.

Unlike other religious buildings, mosques cannot display portraits of any sort. Only God, they reason, should be the creator of images of man. The resulting highly decorated interior, with its beautiful patterned tiles and calligraphy, is stunning.

In order to enter the mosque, women needed to don a headscarf and everyone needed to remove their shoes. If you don’t carry a headscarf with you, no worries, there are plenty of loaners on hand. And a plastic bag was available for to tote our shoes in during our visit.

Next up was the Hagia Sophia, only a short walk away. This building was erected in 537 AD. It has served as a Christian Basilica, a Greek Orthodox Cathedral, a Roman Catholic Cathedral and was eventually converted to a mosque. It is currently a museum, which explains the interesting architectural elements contained within.

Most impressively is its massive dome, which was the largest in the world for over 1,000 years. While its construction is said to have changed the face of architecture forever, the massive dome has proved a strain for its bulging walls. The building is therefore been fortified and remains in a constant state of renovation.

There are several angels decorating the interior corners of the large central dome, but this is the only one that depicts the angels face. The other faces were covered with a feather like design when the building was converted to a mosque. This one remained uncovered following restoration work.

This mosaic depicting the Virgin Mary is easy to miss. It is actually on the wall facing toward the exit of the museum. There is actually a mirror that reflects its image as you leave so that you don’t miss it on your way out.

After a rest break and a sip of pomegranate juice from the cafe next to the museum in the heat of the day, it was time to head to a cooler locale. Where, we were told, we might experience a little rain, indoors.

The Basilica Cistern was built-in the 6th century by Byzantine Emperor Justinian I. It is one of 700 such subterranean structures that exist below the city of Istanbul. This particular one is supported by 336 columns.

It has had several uses over the centuries, including that as a water filtration system for the Great Palace of Constantinople. One of its other claims to fame was that is was used as part of the filming of the James Bond thriller “From Russia with Love”.

A wander through is awe-inspiring, and potentially overly cooling due to water dripping from the ceiling. Another surprise during our visit was the large number of fat happy carp that now make the waters in this cistern their home.

After all of the sightseeing so far, we were ready for a some traditional Turish cuisine for a little lunch. Or, as it turns out, a lot of lunch. In a nearby restaurant we were treated to a parade of appetizers (mezze) – they literally just kept coming.

A  mixed platter of meats arrived, piled high with grilled kabobs, Turkish meatballs (Kofte), chicken and lamb. Looking back this was truly one of my favorite meals during my visit. Not that we didn’t enjoy indulging in plenty of Istanbul Street Food during our visit, but this spread was really fantastic.

Toward the end of our meal, our guide agreed to take on the time-honored tradition of reading the coffee grounds of one of the women on the tour. This involved drinking the strong cup of coffee minus the silt on the bottom, turning it upside down on the plate and then learning what the grounds reveal about the drinker’s current state of mind and future.

Jasmine warned that some people are better fortune tellers than others. Jasmine peered into the cup, turning it around in her hands. She told her guest that she had to be concerned about jealous eyes but very soon was going to see a wish of hers come true.

So how do you think they did? All of the best sites in Istanbul crossed off the list? Even if you agree, this was actually only the first half of the day.

For the second half of the day, we explored Istanbul Through Back Doors and Hidden Places. The guide led us to secret rooftops destinations with some of the best views of the city, back alleys in the Grand Bazaar and gave us a private tour of the harbor. If you’re not convinced yet, that should do the trick.

Don’t forget to pin or bookmark the post for later! 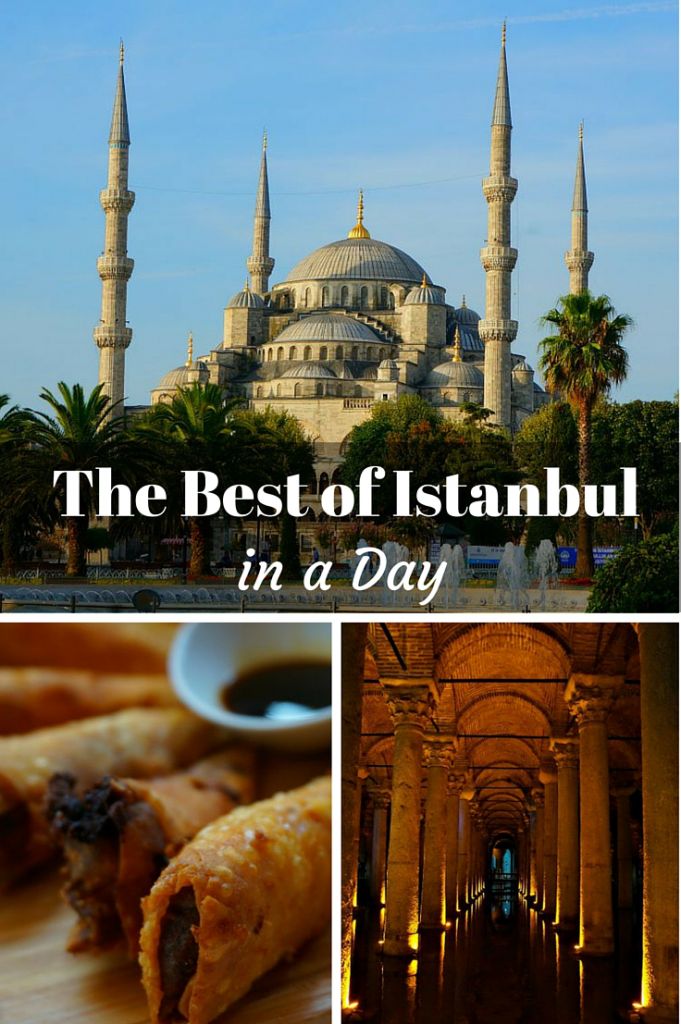 A special thank you to Walks of Turkey who provided us with this wonderful experience. As always, our opinions are our own.

29 thoughts on “The Best of Istanbul in a Day”