While there were many reasons that we were looking forward to our first trip to Taipei, Taiwan, one very specific reason topped the list. During the very beginning of our stay we signed up for a Taiwan cooking class where we were going to learn to make one of our favorite dishes. Xiao Long Bao – Pork Soup Dumplings.

Our affinity for all things dumpling has been well documented. We learned to make Khinkali (Georgia’s version of soup dumplings), Tortellini in while in Bologna, Italy, and Nokedli (Hungarian Egg Noodle Dumplings) in Budapest.

Despite having some solid dumpling making experience under out belts, we have to admit that we were a little bit intimated when presented with the challenge of Xiao Long Bao.

Each tender Chinese Soup Dumpling is very exact. They are all the same size, and have exactly the same number of folds (18) to close the top. They also need to be constructed in such a way that they turn into little pouches of meaty and scalding broth filled morsels that do not end up collapsing and causing injury on the all important trip from the bamboo steamer to hungry mouth.

Don’t Forget to Bookmark or Pin the Article for Later!

There are so many things that could go wrong in the hands of a novice. Which is likely why it takes up to two years of practice before apprentice dumpling makers are elevated to chefs capable of making dumplings worthy of restaurant customers in the famed Din Tai Fung restaurant chain. But, no pressure.

Happily, any concerns we had were quickly diminished by the warm welcome from the Taipei Cooking Class staff.

Before starting our class, we were whisked off to the market by our instructor, Diana, a native but well-traveled local. We strolled through the beautiful Zhongshan park where senior citizens practiced Tai Chi, along with chess games, toddlers chasing pigeons and fathers playing catch with their children.

Diana relayed stories about spending time visiting the park as a child and bringing her own children here to play. A very serene experience that turned our thoughts from performance anxiety about our dumpling making skills to “hmmmm, would we get to sample some of the food at the market?”

As we approached first encountered several food stalls and vendors along the streets leading to the central market. Diana was happily greeted by many who invited us to try samples with big welcoming gestures. After guiding many tours to this place, Diana was after all, legitimately a friend, and on that day, so were we (by association anyway).

The entire time our instructor relayed stories about the vendors, some of whom enjoyed trying out a little English with us. The cultural experience, and the treats (such as seasonal fresh fruit, sticky rice stuffed with savory chicken, fresh-baked sweet cakes and assorted fried seafood tidbits) were a perfect start to the day.

While meeting the local vendors, we bought a number of items that would accompany our meal.

Now, we were ready to go back and get cooking.

When we arrived back at the kitchen, the enticing smell of broth cooking on the stove greeted us. A huge pot was simmering away on the stove along with a few ingredients to be sautéed and added with our nimble assistance.

We sautéed some dried ingredients, such as mandarin peel, star anise and Szechuan peppercorns, to release their flavors and aromas. Additional ingredients were added, including carrots, braised beef, two types of bean paste, rice wine and soy sauce.

These were all added to the pot and boiled for another hour. In the end bok choy and boiled noodles were added to a bowl and topped with ladles full of the meaty soup.

But before it was ready, there was much work to be done, starting with the beginnings of our Xiao Long Bao dumplings. Deep breath, here goes!

The process of making Xiao Long Bao (or Xiaolongbao) starts out simply enough. Mix together the flour, salt and water. Knead it together into a dough and let it rest. Prepare the filling by adding a few choice ingredients with the minced pork and again set aside. Child’s play.

What comes next is a bit more complex. A small ball of dough is weighted to an exact amount to make an individual dumpling casing. Next it is filled with the exact amount of filling (enhanced with addition of minced jellied broth that will magically turn into the soup part of the dumpling when the dumpling is steamed). Then each dough packet is deftly folding it into a nicely pleated pouch for steaming.

With the ever helpful presence of our patient instructor Diana, and the addition of a small specialty rolling-pin and a tiny scale to insure conformity, everything actually worked out pretty well. Please overlook the lack of a standard number of pleats and an elegant twist on top of each dumpling.

Minus those details of perfection, I’d say they turned out pretty well. Or, most importantly, they were delicious, so perfect enough for me.

While waiting for the dough to rest before assembling the dumplings, we made a deceptively simple smashed cucumber salad.

Smashing and then shaking the cucumbers allowed us to remove the seeds and some of the water, while retaining the crunchiness of the cucumber. It was all chilled together with sugar, vinegar and some fresh slices chili peppers.

The salad was so refreshing a played nicely together with the other heavy noodle dishes. This is one easy salad that I plan to make over and over again.

We had seen bubble tea many times before, but had never tried it. The big tapioca balls in a large glass of sweet milky strong ice tea was not really on my radar, but certainly is to everyone in Taiwan. Evidenced by many many stands selling the stuff. So given the opportunity we were happy to give it a try. 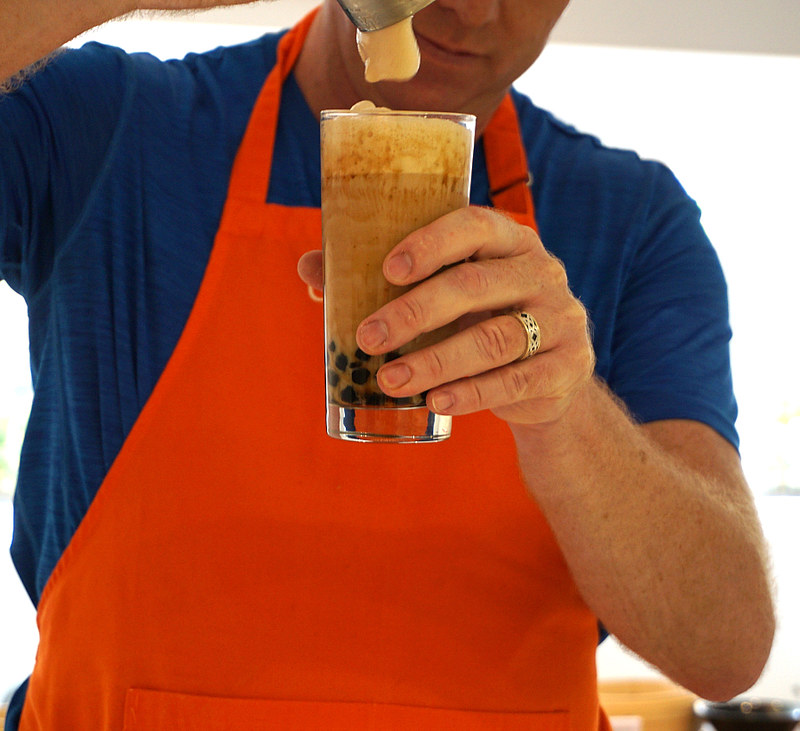 In the end, it was indeed strange, but at the same time sweet and delicious. The concoction requires an extra-large straw in order to extract the tapioca balls from the bottom of the glass. For those of us not used to having foreign objects in our iced drinks, it takes a bit getting used to. But trust me, it grows on you and I wouldn’t be surprised if we tracked down an other glass before we Taipei.

The most interesting thing about this experience is that we left it behind with some preconceived notions that we had walking in. The first was that making Xiao Long Bao was not as difficult as we thought. The second, was that the best part about the class wasn’t cracking the mystery of how to make these succulent dumplings.

The best thing really was the people, the neighborhood, the food, and how they all come together. Were were part of it for a day, and will be forever grateful for that opportunity. Along with the recipes that they gave us to try at home.

We will see if the memories remain so sweet after we try to make it all by ourselves. Either way, we’ll never tell!

Here are a few related articles about food tours and cooking classes around the world, along with posts about travel in Asia to help inspire or plan your next vacation!