After three months in South America, where we had delicious but for the most part non-spicy food, we arrived in Mexico — land of Picante! We decided to scribble out our totally biased, no-holds-barred commets of the joints where we gorged on tacos and tostadas. There’s a lot more than just Mexican food in Playa del Carmen, particularly on the famous Fifth Avenue, where you’ll find meals of every ethnic variety, but if you get off the tourist trail you’ll find delicious (and cheap) eats. Here’s the taco tour roundup, along with a specific Sean/Jen comment:

Los Aguachiles
Corner of Calle 34 and Avenida 25 (there’s another location just off 5th Ave)
A huge variety of seafood dishes. Ceviche tostadas, fish and shrimp tacos, all fresh with amazing flavors. This place is little bit more “gourmet” than the typical taco joint, with nice touches like fried leeks on the tacos for additional flavor. Their pickled onions topped on the tostadas are some of the best! The crowd of sauce options on the table (at least 8 different ones, from habanero to garlic to cilantro) can make every bite a little different. 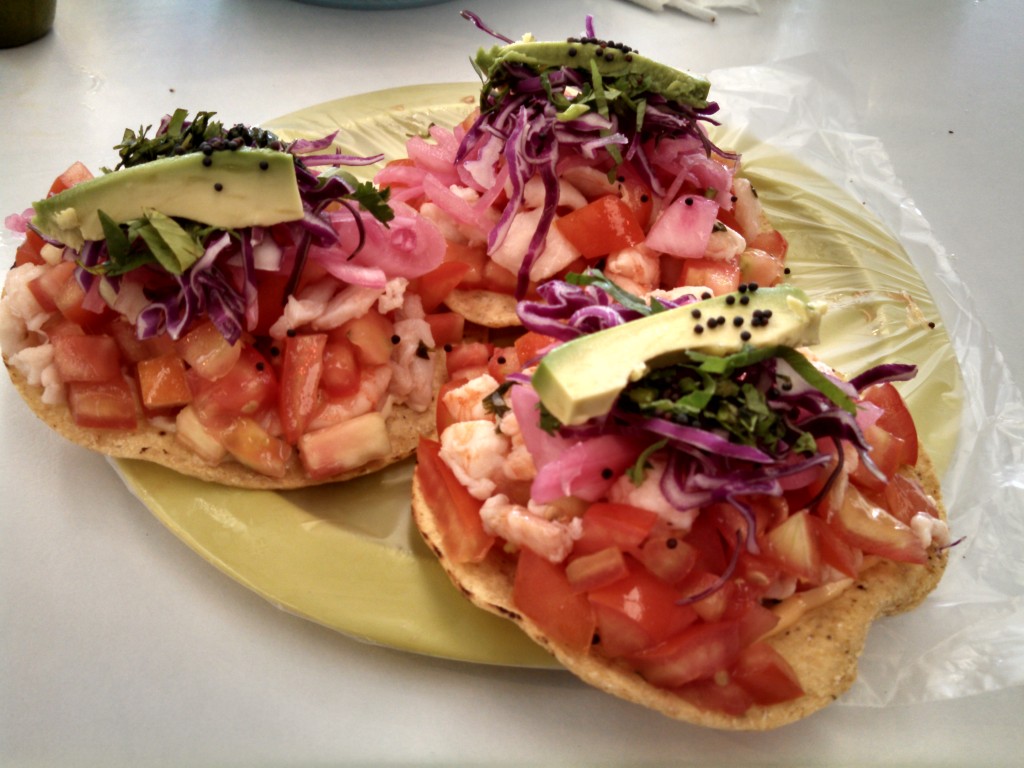 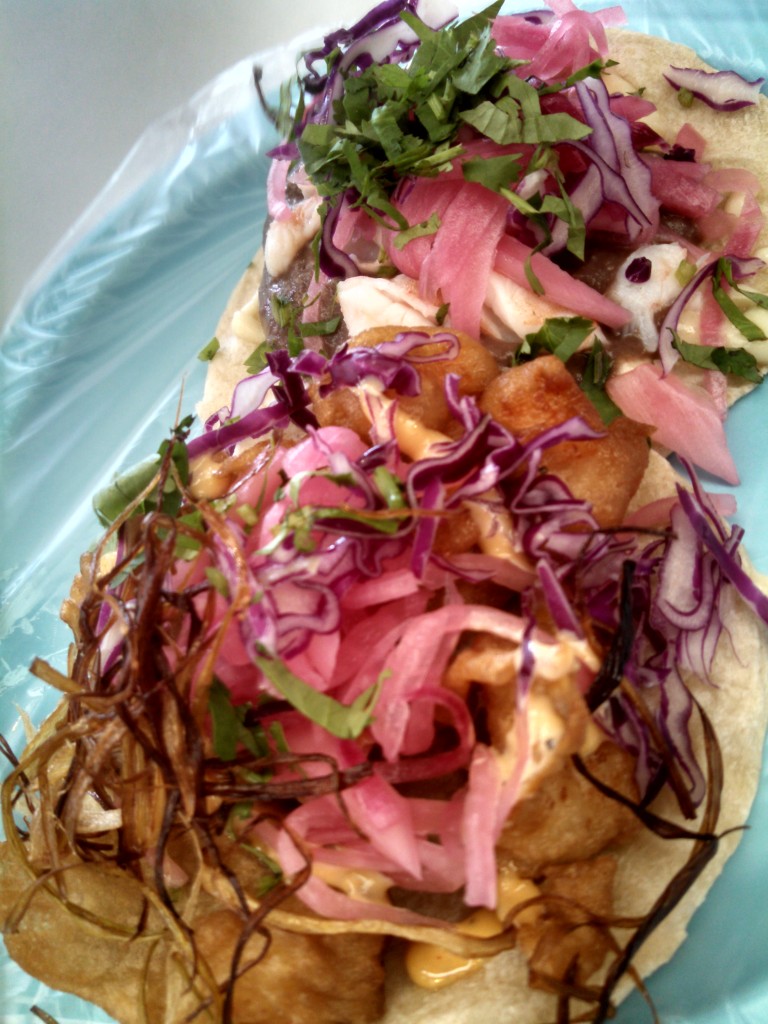 Jen:   The tempura fish taco was my fav here.  Although, I have to admit that anything fried does tend to come out ahead for me but what can I say?  The fried leeks on top were an unexpected treat.  They also had skinny versions some of their tacos – steamed fish in a bib lettuce “taco.”  Maybe my pants would have fit better by the time I left if I had eaten more of those …

Chiltepin Restaurant
Calle 34 and Avenida 20 N
This happening corner place often has live music, and although we’ve never seen anyone in it, a swimming pool in the rear dining area. They serve traditional fish tacos, with a great beer batter and cabbage slaw, and have a menu that ranges beyond tacos and tostadas.
Jen:  Amazing shrimp “burger.”
Sean: Good tacos, I liked it more for the atmosphere than the food.

El Rey de Taco truck
Typically located outside of the Mega supermarket, on Avenida Constituyentes
The trick to any local restaurant, but particularly street food and food trucks, is to look for the places that are busy with lots of locals — a cook who makes the locals sick won’t be in business for long. Every time we’ve been by El Rey de Taco, there’s been a line of people — everyone from students, to local workers, to older ladies in dresses. Order from the cook (there’s carne, pollo, and chorizo tacos, with or without cheese), take your plate and pile on the condiments lined up on the front of the truck (be careful with the habanero sauce at the end). You’ll most likely be eating standing up, but there are a few chairs parked on the sidewalk. You can’t be the price, either, at 2 pesos (~90 cents US) each. 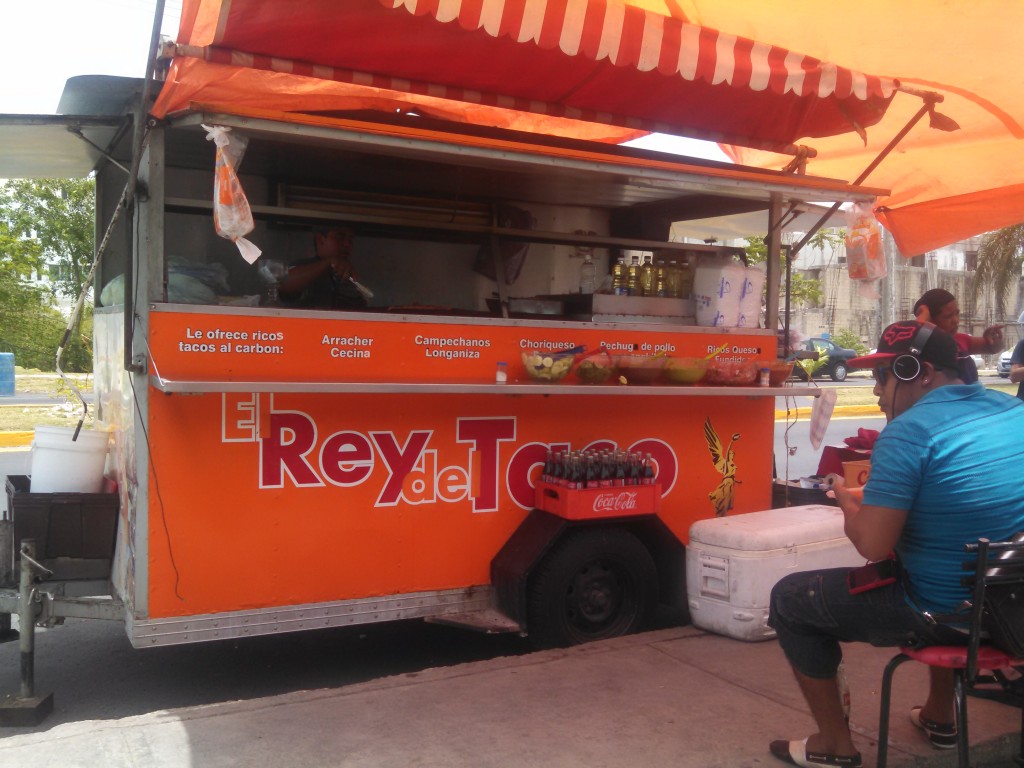 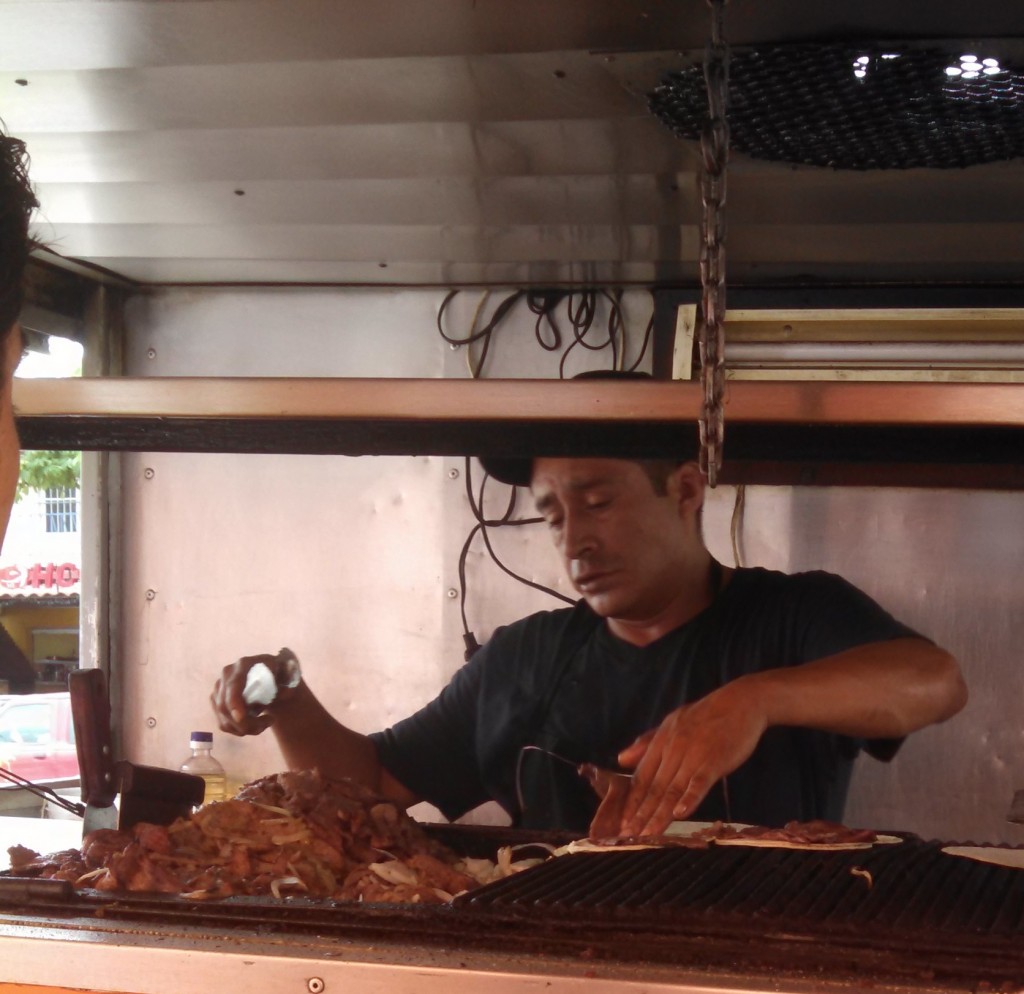 The King at work 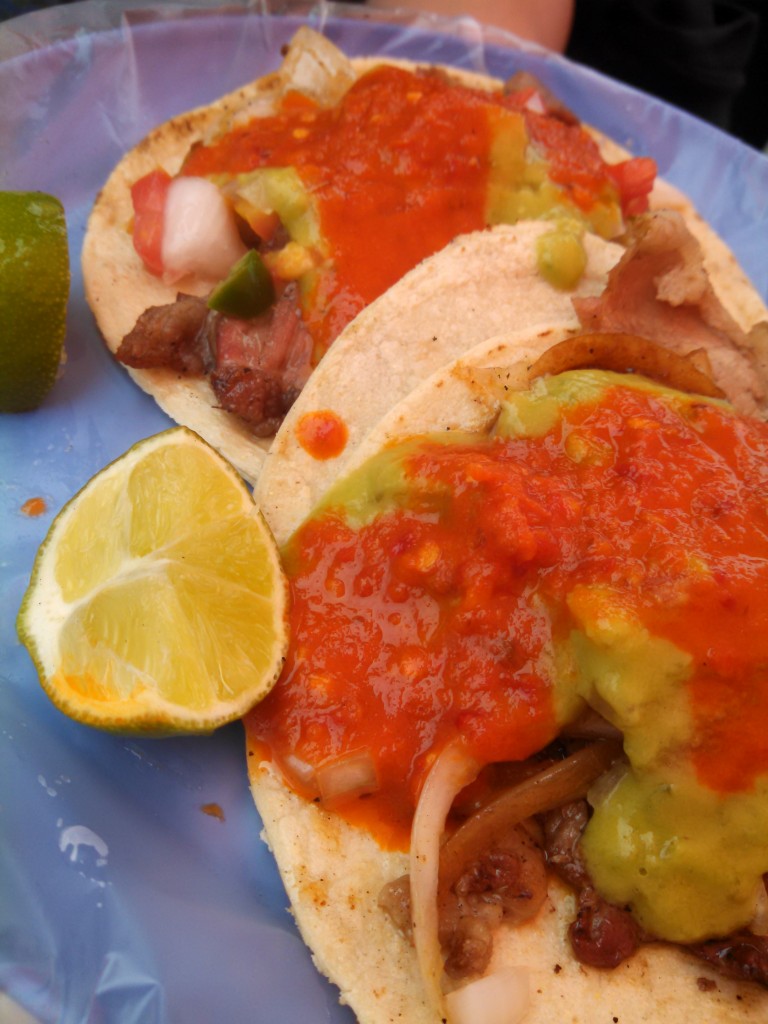 For the record, this is WAY too much hot sauce

Jen:  Most tender carne asada taco I have had.  Good enough to have me stand in a long line in 90 degree heat – more than once!
Sean: My absolute favorite carne asada! And don’t skip the hot sauce — the burn lasted far longer than the taco.

El Fogon
Calle 6th & 30th Ave (and a bunch of other locations)
The star of the show at El Fogon is meat. As you approach, you’ll smell the grill and see the smoke from the hearth, where they grill up marinated steak in all sorts of varieties. But the star is the huge skewer of El Pastor (marinated pork) visible from street level. Originally brought to Mexico by Lebanese immigrants in the early 1900’s, pastor (think Mexico’s version of Schwarma) is layers of marinated pork piled on a vertical spit, which is topped with a pineapple. The spit master slices the juicy, crunch bits of pastor off the spit into individual tortillas, flicks a slice of pineapple on it, and piles on onion and cilantro. 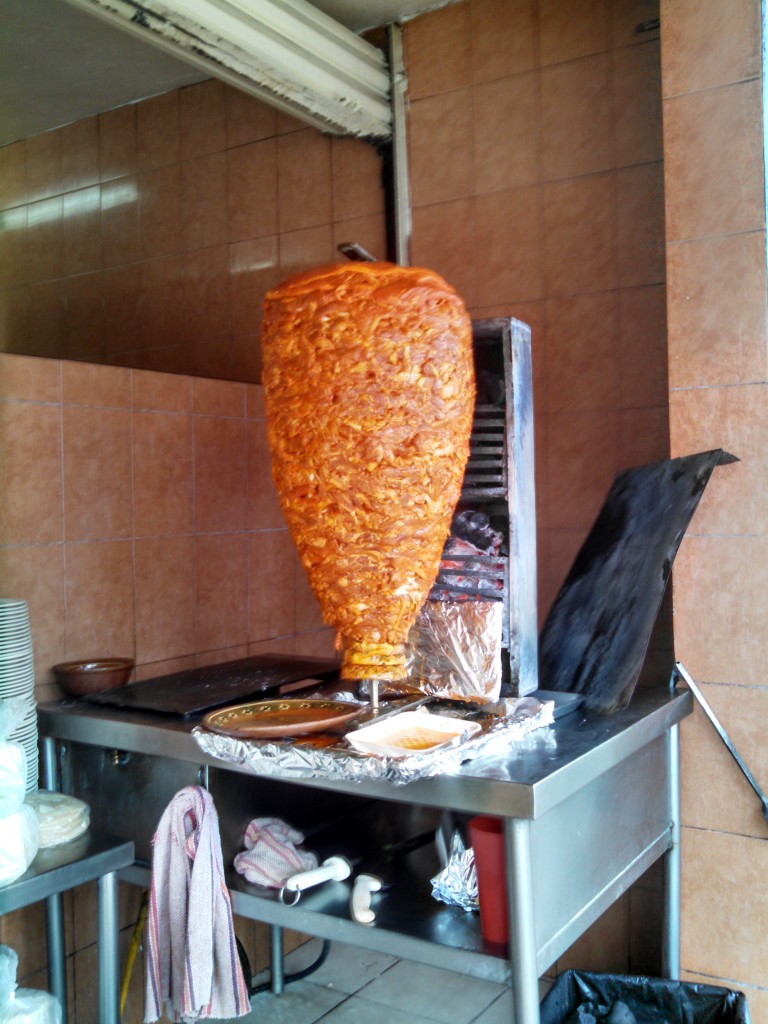 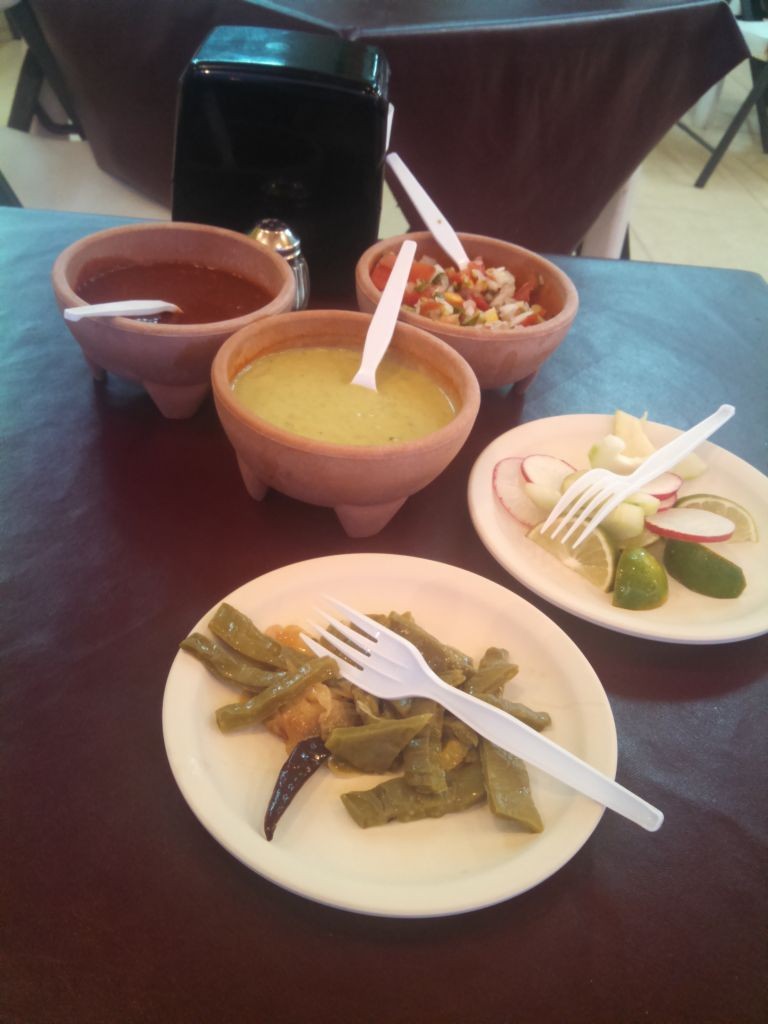 Jen:  The El Pastor Taco was my absolute favorite here although the fact that it was plenty greasy may have been part of the reason.  It was definitely the reason I lived in regret after eating one.  But that doesn’t mean I didn’t come back for  more.
Sean: I liked the little touches — like the serving of cactus with the meal. Pastor rules here.

Dona Mary’s
Calle 38 and 5th Ave
Definitely a local’s place, chicken rules the roost here (sorry, couldn’t help myself). Run by a multi-generational family of women, Dona Mary’s serves up chicken on tostadas and tortas, in soups (caldos), in empanadas, tucked into enchiladas, and in steamed-in-banana-leaf tamales. What’s available can vary from what’s on the menu from day to day, but your server will let you know. Our first time here was a little disappointing, since they only had the chicken soup available. The second time, though, everything was available. Great tostadas, piled high with beans, chicken, and cheese. The tamales steamed in banana leaves (unlike the tamales we’re used to in corn husks) are moist and filled with tender chicken. 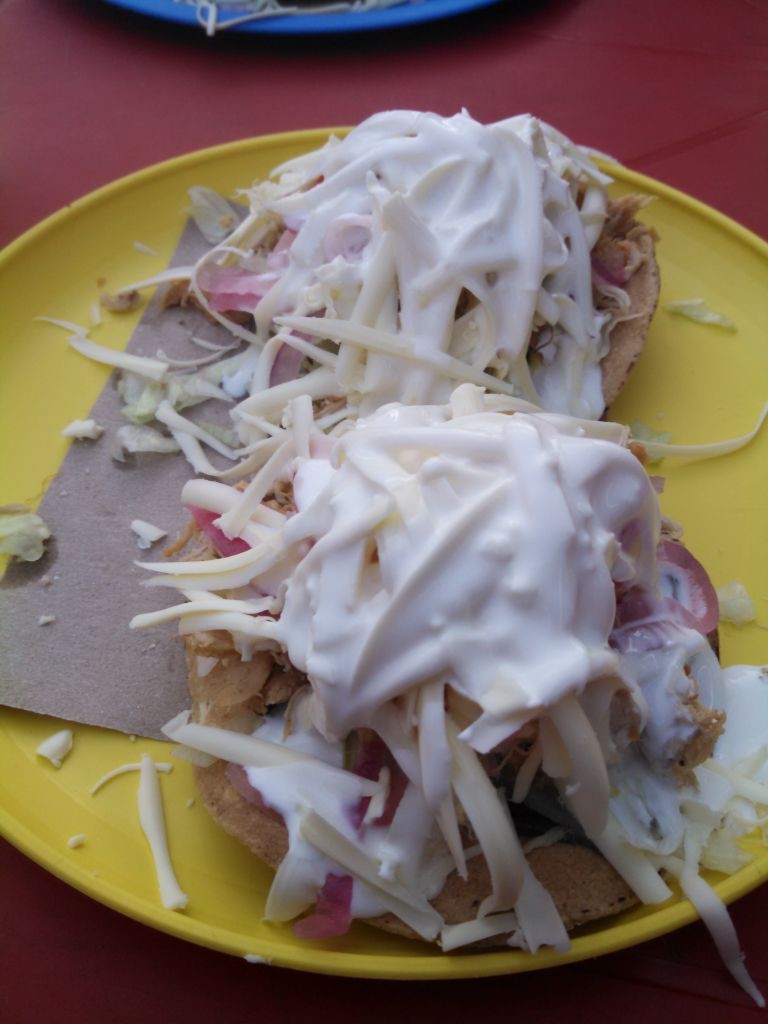 Sean: Chicken tostadas — messy and delicious!
Jen: I only had the soup, so I’m abstaining from a taco comment.

Pez K Ito Food Cart
Typically on Calle 38 between Ave. 30 and Ave 35
We were given the recommendation to try to the fish cart by a local who told us these were the best seafood tacos in Playa. He was right. You need to get here early, because everything is made to order, and a long line of hungry locals can mean long wait times. 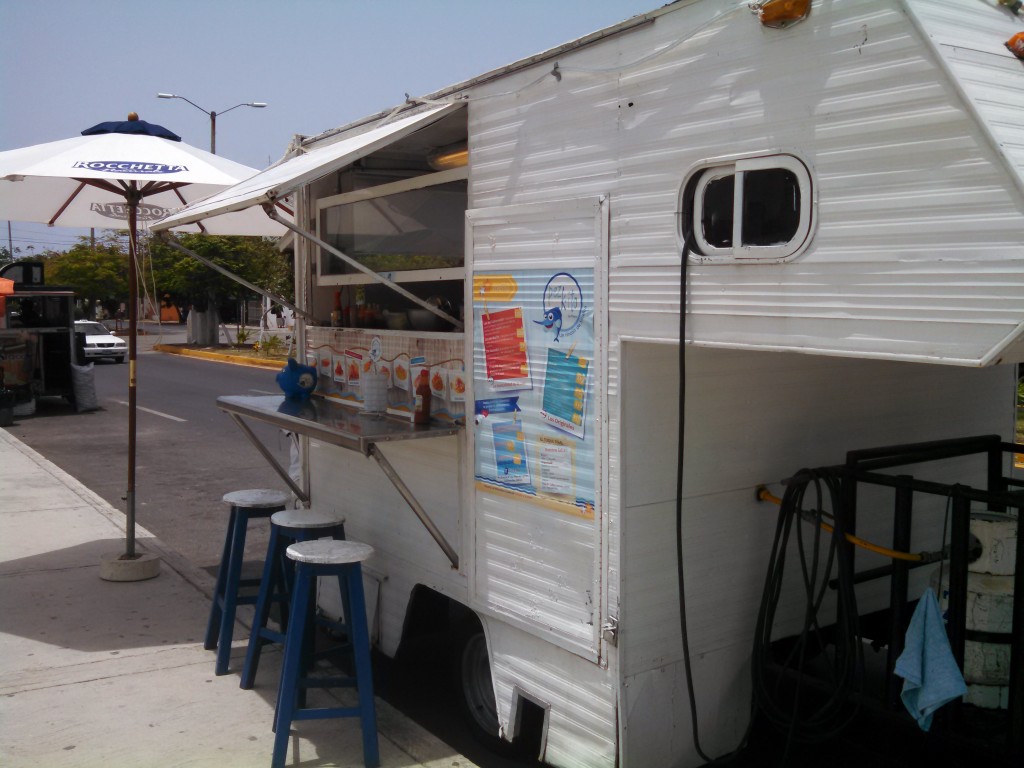 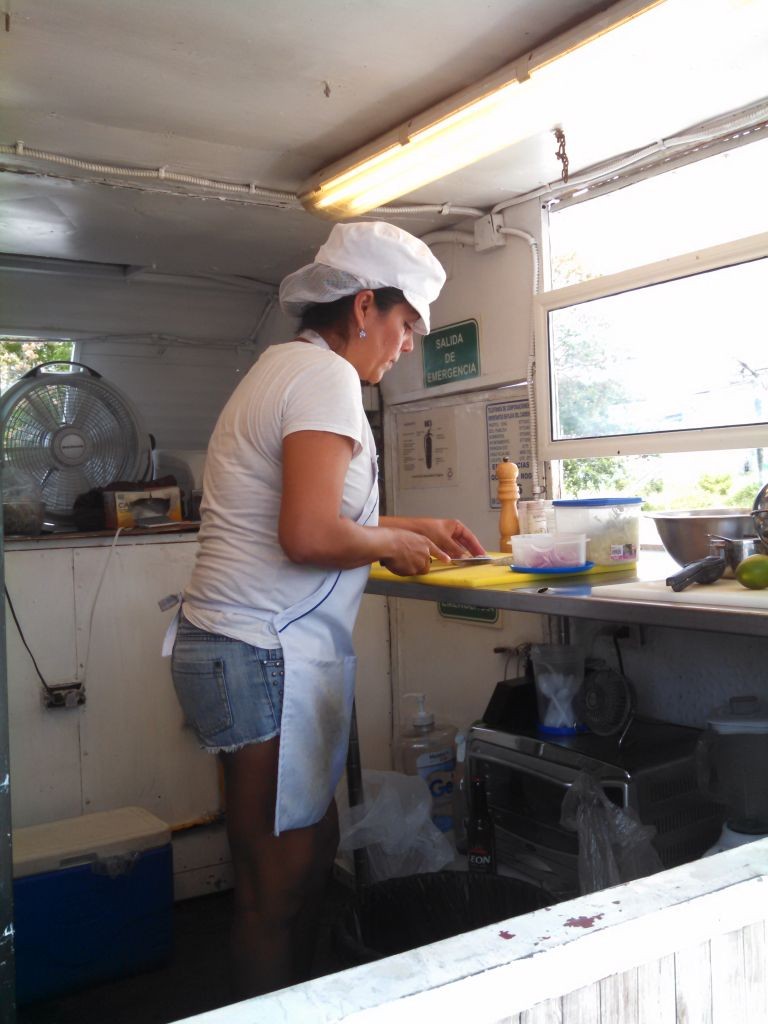 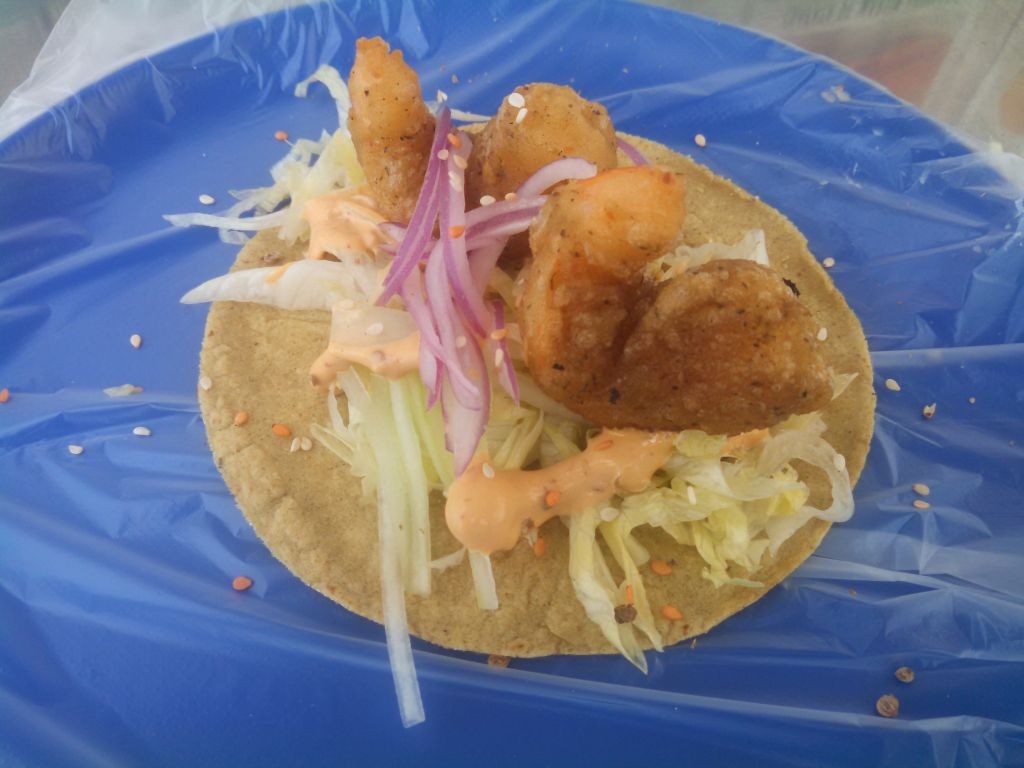 Jen:  We only sampled the shrimp taco here.  Each shrimp cleaned, given a dunk in a light batter and fried. So sweet and fresh! These were my favorite tacos in Playa hands down.
Sean: Amazing! My regret was that we didn’t eat more of them.

Don Sirloin
Multiple locations
This place has a little more the feel of fast food serving up tacos, maybe because of the funny cartoon cow on the logo, but it was still good. The have the street-side pastor on a spit like a lot of these restaurants, but Don Sirloin was the only one we’ve seen that also has a skewer piled with beef as well. 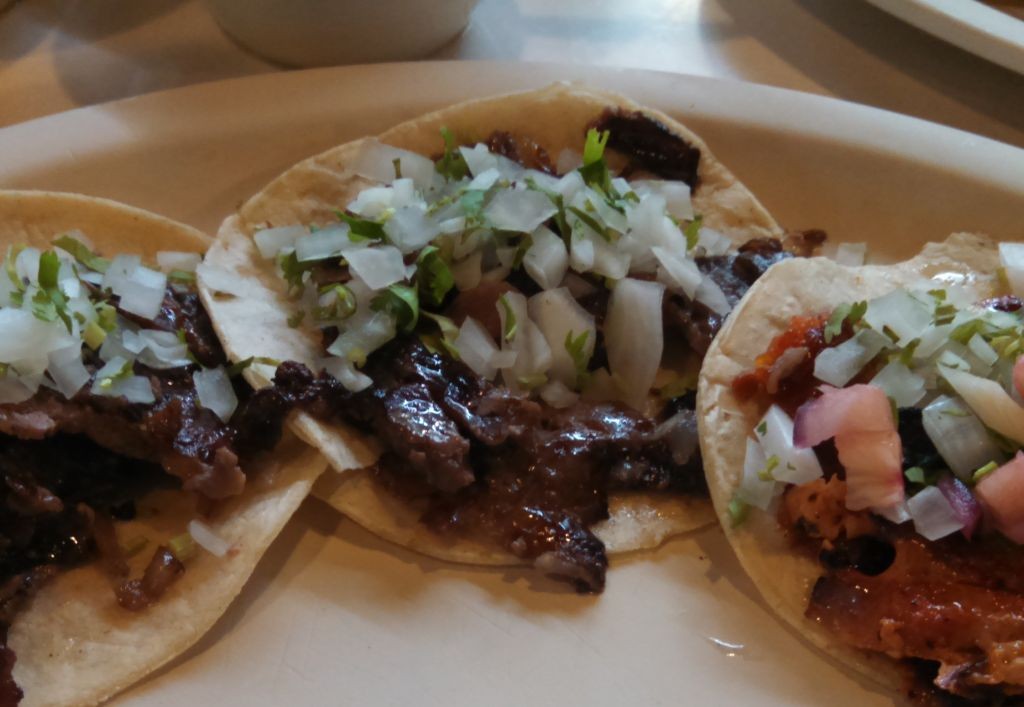 Sean: Interesting take on the sirloin “pastor”, but not my favorite.
Jen: A little less inspired than some of the other places.

DAC Market
30th Avenue between Constituyentes and Calle 20
This restaurant is attached to the DAC Gourmet Market in the Canter of Playa. Ok, so it’s not a taco place. The popular restaurant serves up healthy vegan options including an array of smoothies and salads. They also feature other local favorites for the less than health conscious. For example, the chilaquiles, which are like breakfast nachos made with chicken, egg, and green or red sauce. Chilaquiles are one of many dishes in Mexico that are recommended for curing a hangover. 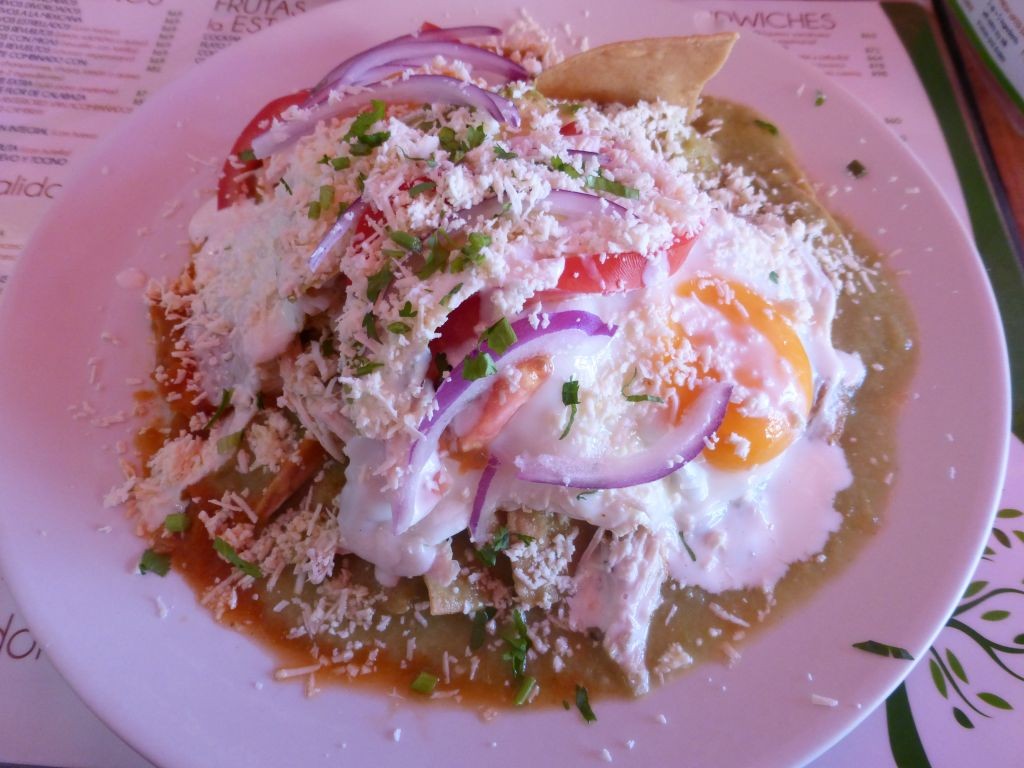 Jen:  I went for the chilaquiles mixto. I cannot comment on their ability to cure your throbbing head after a night out, but I can recommend them for their flavor.

Sean: I failed to order the chilaquiles, and that was my mistake. Thankfully, Jen was willing to share her overflowing plate.

What do you think? Which must-try taco place did we miss? Do you agree or disagree? Let us know in the comments.

Playa Del Carmen Side Trips – Yes You Should!

Looking for suggestions for best food in Akumal

For me its the coconut shrimp at La Buena Vida, Stacy. Love that place!

[…] I'm going to have to put Barbacoa de Tulum and Taqueria El Pastorcito for the next update to our Taco Tour of Playa Del Carmen. So many tacos, so little stomach […]

I'll leave you one other favorite its not tacos though......Pasta e Polpetta at Av. Constituyentes Entre Av. 30 y 35 N....across from Mega on the NW corner of the intersection. Antonello makes the best bomba and dona's you have every tasted! I'm talking donuts for breakfast! They also make fresh homemade pasta right there while you watch. Every meal has been wonderful there, and you will love his enthusiasm for what he does. Great guy!

We've eaten at nearly all of these, and we also love the fish tacos at Yo Amo Tacos. You must go to 1sur and ave 20. Carnitas Teresita. The kastacan is out of this world!

We're heading back to Playa in two weeks, and we'll add those to our list! Maybe we need to do a Taco Tour Part 2!

While some of these places are good, they aren't exactly off the "tourist trail." Some of the best tacos (like some of the best everything else) are found on the other side of the highway. Tacos Gomez, for example, across from Mission del Carmen are out of this world. On the beach side of the highway, the green carnitas truck that parks on 38th (I believe) has the biggest and best carnita tacos in town. For cochinita, the tricycle that parks in front of Telas Asis on 30th and 36th is the real deal.

El Fogon is overrated, IMHO. Las Aguachiles are good for interesting seafood tacos but for the staple shrimp taco it is hard to beat La Floresta.

Thanks for taking the time to comment. We'll be back in Playa in a few weeks and will track down the places you recommended. Thanks for the suggestions!