Today we did a little wine tasting in Split, Croatia. More than that though, we learned a story of a family, their wine, and a grape.

We’ve been on lots of wine tours. Traveling and sampling local wines just goes together so well, and as anyone who knows us can attest to, we love wine.

But even more so than the wine itself, we love learning about the stories and history of a region’s wine.

Winemakers are typically passionate about their craft – after all, winemakers don’t get into the business just for the money.

Making wine is wrought with challenges and is not a guaranteed way to make a good living.

Our unique wine tour in Split, Croatia gave us a close up look at the Putalj Winery. 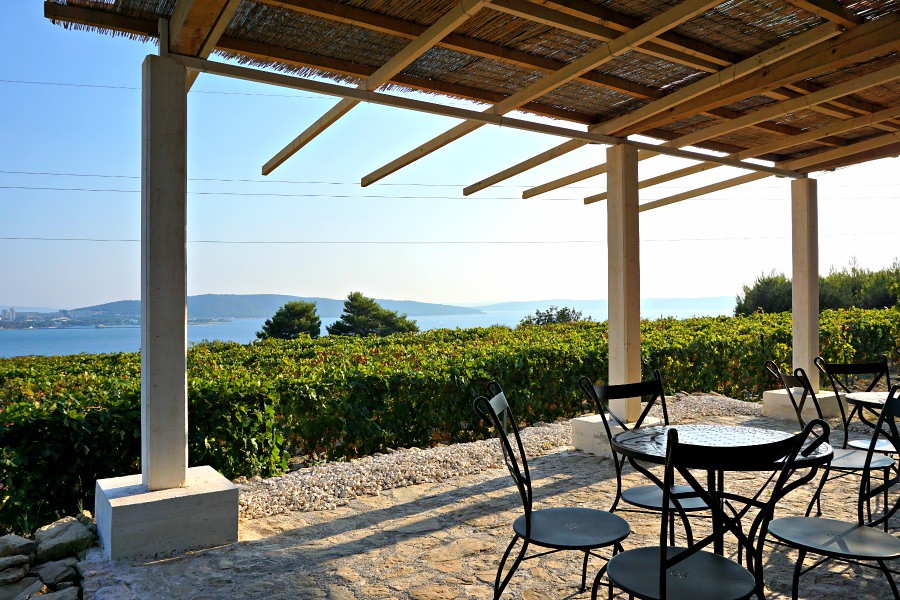 Here we were provided with a taste of the local wine and an introduction to the history and traditions of a man who keeps the passion of winemaking in Split alive.

As a bonus, we were let in on a little detective mystery.

Our tour started auspiciously. We were picked up by Srdan, co-owner of the tour company, The Art of Wine. He hastily explained “we have a change of plans. We need to get a different car.”

It turns out, the bottle of wine he was transporting on his way to pick us up suffered a cruel fate, due to a sudden stop and an abrupt meeting with the car dashboard.

He apologized about the wine smell in the car, but we didn’t mind – we were headed to a winery, after all.

A quick change got us into a new car, and we headed out of downtown Split, into the mountains.

The traffic and crowds of downtown Split fell behind quickly, and we found ourselves speeding by farmland and olive groves before the driver turned off to head up the mountain.

At a parking lot partway up, we stopped and were greeted by Anton, our host and winemaker.

He herded our small group down a path, telling us we were going to start by checking out the view from the patio.

A short walk ended at a standalone outdoor patio perched on the edge of a vineyard, with the mountain towering above us, and surrounded by greenery, trees, with farms of grape vines.

The view of the city of Split below welcomed us as well. We sat, and Anton reached into a cooler to start off our first tasting, and to introduce himself. We clinked glasses and got comfortable. 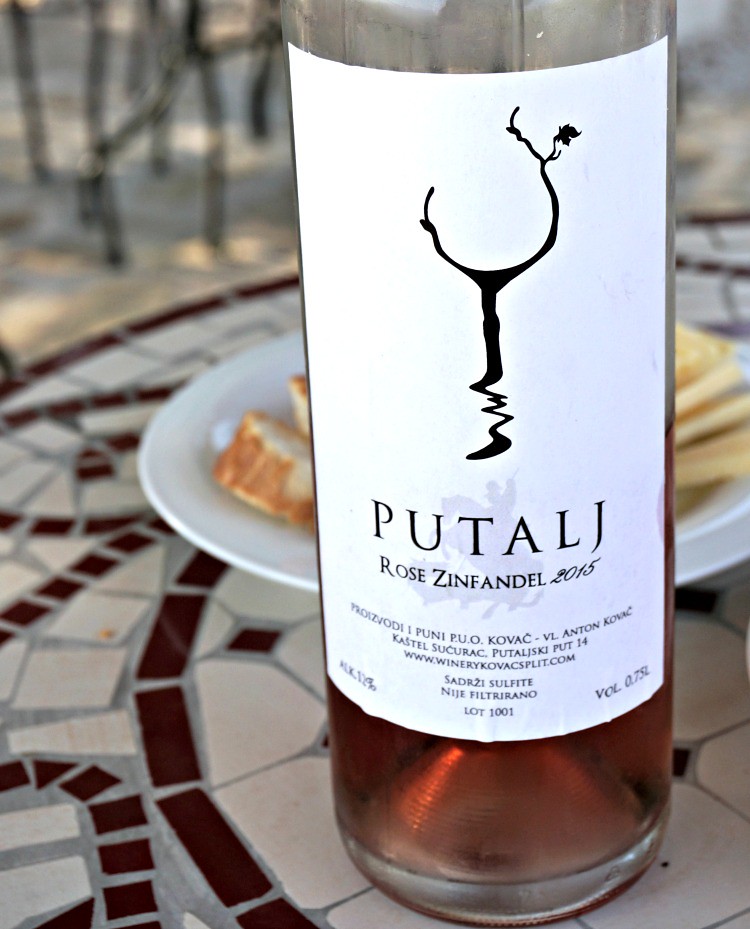 A Long Relationship with Croatian Wine and the Land

Anton’s family has made wine for many generations in Croatia. Motioning with his arm to the surrounding hillsides, he explained, “The hills as far as you can see used to be covered with vineyards.”

He traces him family’s land in this region back to feudal days, when the land was worked by farmers who were essentially serfs connected to the land.

One of his ancestors gained special disposition from the feudal lord at one point, allowing him to keep his own land.

That didn’t stop the land, and his family, from being “transferred” to a local bishop when the lord chose to give a gift to the Catholic Church.

As we sipped our Rose Zinfandel, Anton pointed to the mountains behind us. The ridge formed the border between the Venetian territory to the sea and the Ottoman territory inland.

The daunting mountain served as a natural border between the two empires over the years.

I couldn’t help but imagine the battles and blood that was shed on that very ridge as the enemies battled for territory.

A throughout hundreds of years of these conflicts, Anton’s ancestors worked the land and made wine. 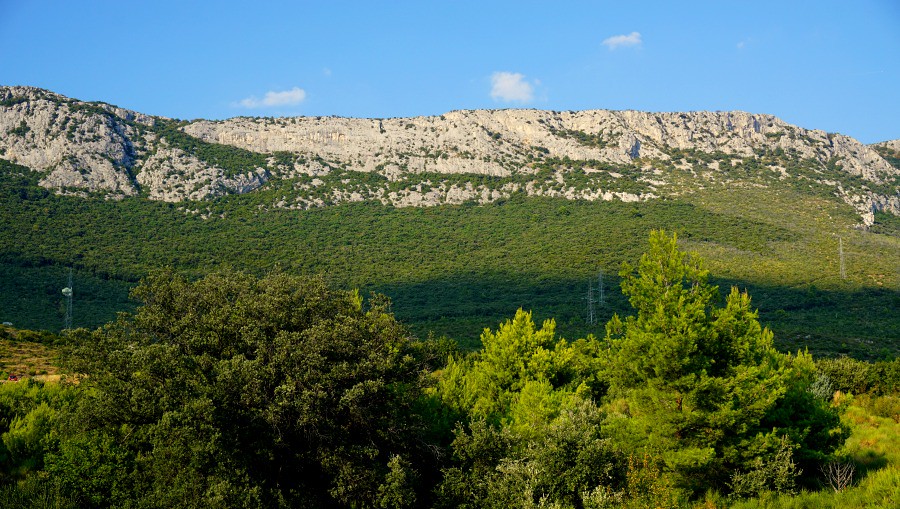 In the 1920’s, Anton’s great-grandfather moved for a time to the United States, to Chicago.

He worked a number of jobs, making a quite a good living, at least in comparison to local standards at the time.

Anton implied that his great-grandfather’s winemaking skills were in great demand, particularly during Prohibition era.

Needless to say, upon his return to his homeland, he was quite a wealthy man. However, what he hadn’t foreseen was the advent of Communism. 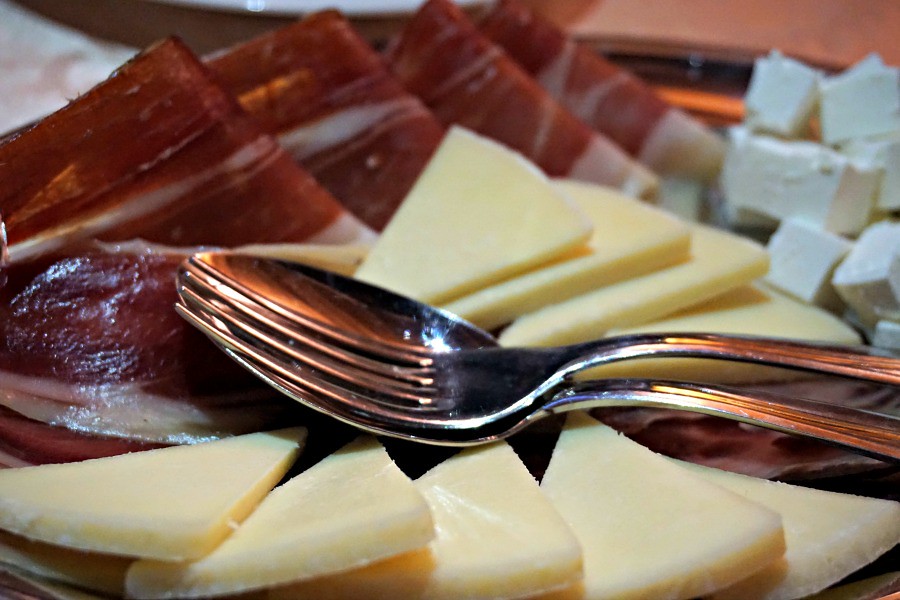 Meat and Cheese Platter to Enjoy with Our Wine

Communism and Winemaking in Croatia

The communist and socialist revolution in Eastern Europe had a strange effect on wine production in the region.

It’s not that wine wasn’t produced at all, it’s just that small, specialty wineries were swallowed up into large cooperatives.

During Communist times, wine-making was dictated by government bureaucrats, and production was based on numbers and quotas.

The government also seized estates like Anton’s, which had been run by families for centuries. Lots of history, and connection to the land, was lost through this period.

Today the hillside where we were perched only has a fraction of the vineyards it had for years. Anton’s family plot is one of the few remaining.

But Anton has been acting on a plan to reinvigorate wine-making in this region, and he’s taking a big leap of faith to do so.

This leap involves a grape both new, and old, to the region. Which leads us to the search for the origins of Zinfandel.

Everyone’s heard of Zinfandel grapes – they’ve been grown In the United States for hundreds of years.

The grape is sadly known for White Zinfandel wine, a semi-sweet blush wine that became massively popular in the 80’s and 90’s. Zinfandel grapes can actually produce incredibly complex red wines with lots of tannins.

Most of the zinfandel, however, is used to make the pink stuff.

The popularity of Zinfandel resulted in two effects on our story. First, it became known as the “American vine and wine.” And, this nomenclature prompted researchers to try to determine the true origins of Zinfandel, in Europe.

A multi-decade grape detective story resulted, with its origins identified as Italian, Austrian, and Croatian.

Researchers from The University of California, Davis (one of the premier research universities on wine and grapes) started delving into the mystery in the 1960’s.

Zinfandel’s namesake is Austrian, which led many believe that the grape originated somewhere in the Austrian empire.

When Primitvo grapes from the Puglia region of Italy where brought to America, researchers noted the similarities between these and Zinfandel.

By 1972, many wine experts had stated that Zinfandel and Primitivo were virtually identical, and pointed to Italy as the original home of Zinfandel.

The Italians were more than happy to accept “ownership” of Zinfandel.

With the history of Primitivo grapes in Italy documented back to the arrival of the Phoenicians to the Italian peninsula, it seemed that the family history had been identified. 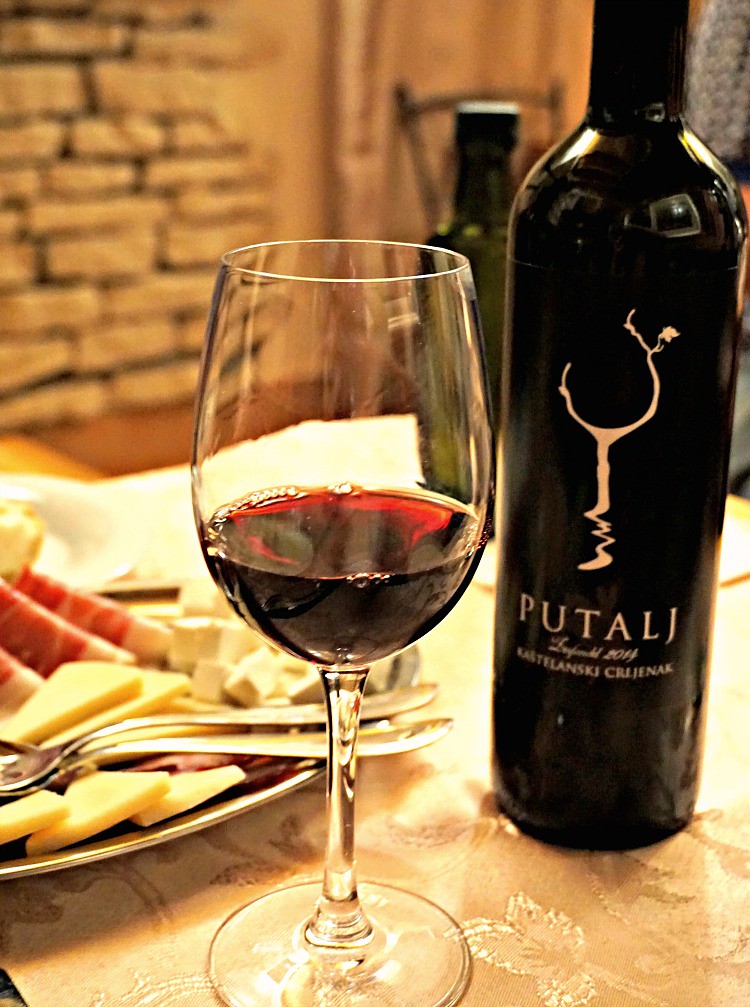 Some wine experts had doubts, though. Among them were Mike Grgich, a very successful Californian winemaker who was born in Croatia.

He and a number of Croatian wine makers felt that Zinfandel was more likely related to Plavac Mali, a popular grape from Croatia.

Grgich and others founded (and funded) a research initiative that included DNA testing. Over a number of years, hundreds of vines were painstakingly tested.

In the end, a single vine from a 90-year-old woman’s garden in Split, Croatia produced the definitive DNA evidence. Zinfandel.

As it turns out, is a Croatian grape known as Tribidrag, with its cultivation dating back to at least the 15th century.

So, why did we delve into this scientific search for Zinfandel? Because at Putalj winery, Anton is departing from traditional Croatian varietals, and growing Zinfandel in Croatia.

Getting back to boutique wine-making

Done with immersing us in the history of the land and the wine detective story, Anton roused us out of our chairs and told us it was time to see the wine production.

We hiked back up the hill to the waiting car, stopping to pick almonds off a wildly growing almond tree (a first for me!). Then we headed to Anton’s house. Yes, his house. 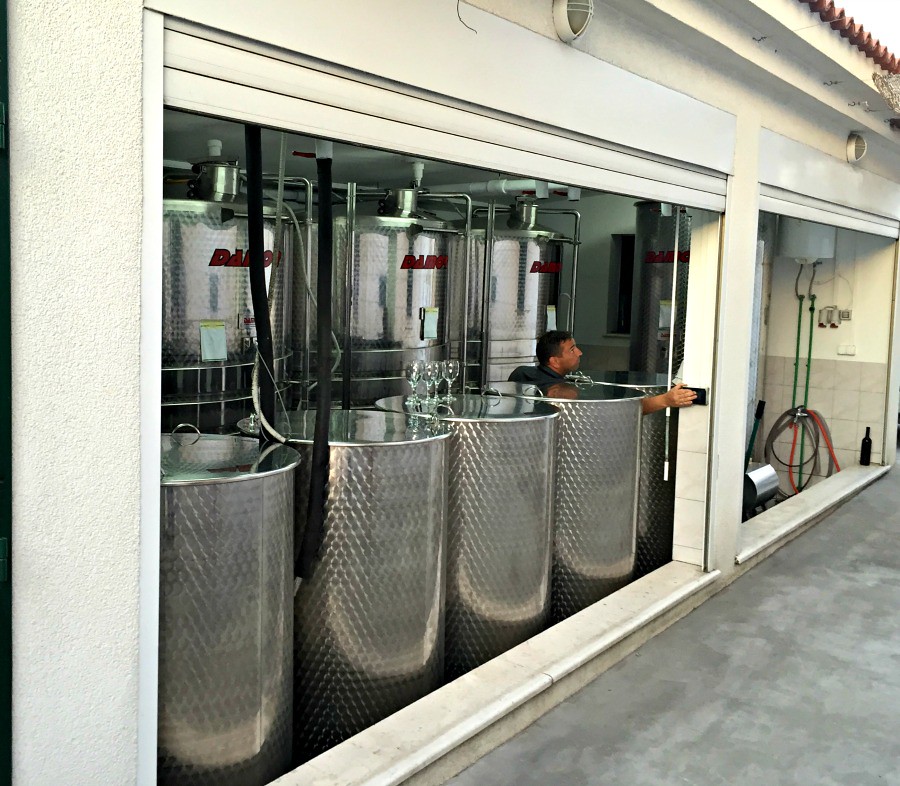 At his house, Anton showed us exactly what small, boutique production looks like.

We walked to a structure that looked like a long garage, and then our host disappeared inside. Moments later, the walls opened garage door style to reveal steel tanks where the fermentation was underway.

We sampled both kastelanski crljenak and zinfandel directly from the vats – and while the wine was clearly still young, it was delicious. 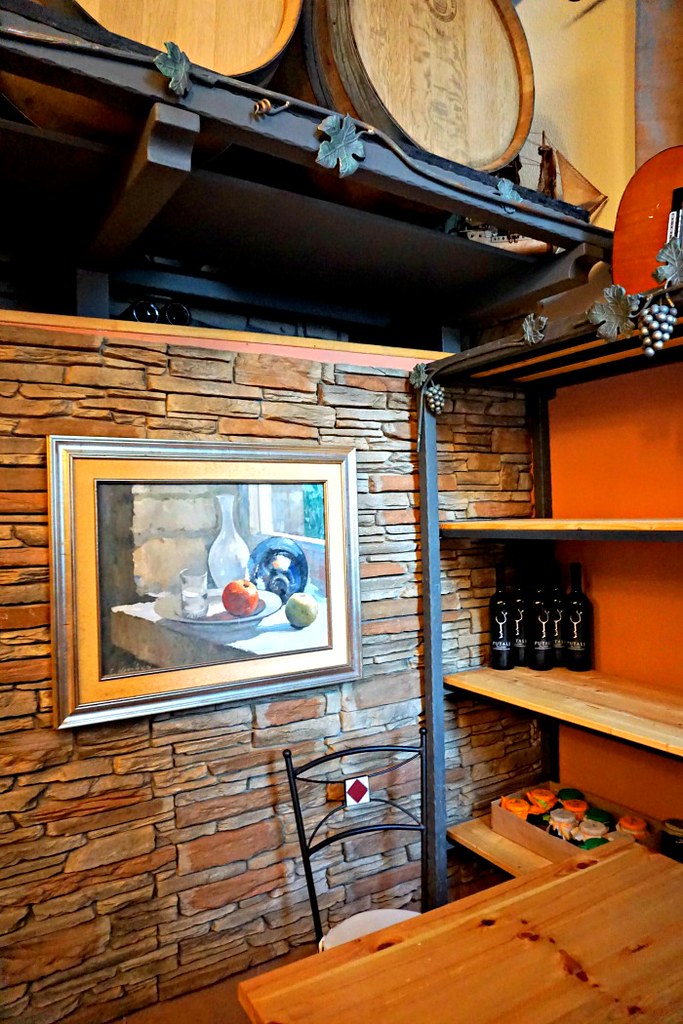 Tasting among the barrels

Next to the fermentation “garage”, was a small tasting room. This room actually doubles as the aging area for the wine, so we sat amongst barrels of wine almost ready for bottling.

As we settled into the cozy room, Anton brought us samples of local cheese and olive oil. And, of course, more wine.

When it was time to leave, we were reluctant, and not just because of the wine. It felt as if we had a new winemaker friend because had shared so much of himself with us.

He brought to life, through his family stories and history of the region, the wine in ways that we rarely find.

For more information about attending this tour, or other Split Croatia Wine & Food Tours and Cooking Classes, contact Srdan from The Art of Wine. Thank you to The Art of Wine for hosting us for this day of wine tasting and stories! Our opinions, as always, remain our own.