Solta is a Dalmatian island located a mere 9 nautical miles from Split, Croatia. It is a lesser chosen destination in comparison to more mainstream islands like Hvar and Bra.

That honestly was part of the reason we opted to visit Solta.

Split is a beautiful place to explore, but during mid-summer, when we were there, the crowds can become quite oppressive. Particularly when the cruise ships roll in and disgorge in the morning.

So after spending a few days touring around Split and doing to fun wine tasting and an amazing food tour, it was time to find a quiet place to unwind.

Solta was the perfect choice. 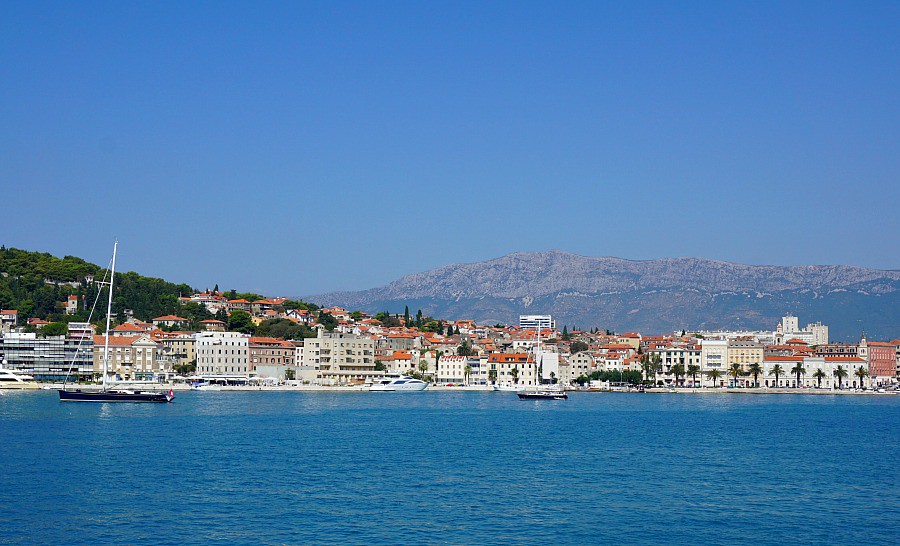 View of Split Croatia on the ferry to Solta

Solta is a quick 30 minute ferry ride from Split, Croatia. Tickets can be purchased at the ferry terminal. The drop off point is the port in the tiny village of Rogac.

A bus that mirrors the ferry schedule waits to cart visitors to the other side of the island, where there are more restaurants and a small pebbly beach.

We made the mistake of deciding to poke around the marina before boarding a bus to the other side.

I say mistake because when we were ready to head to the beach, there were no taxis or buses in sight.

As it turned out, though, this resulted in one of the most colorful encounters of our visit. 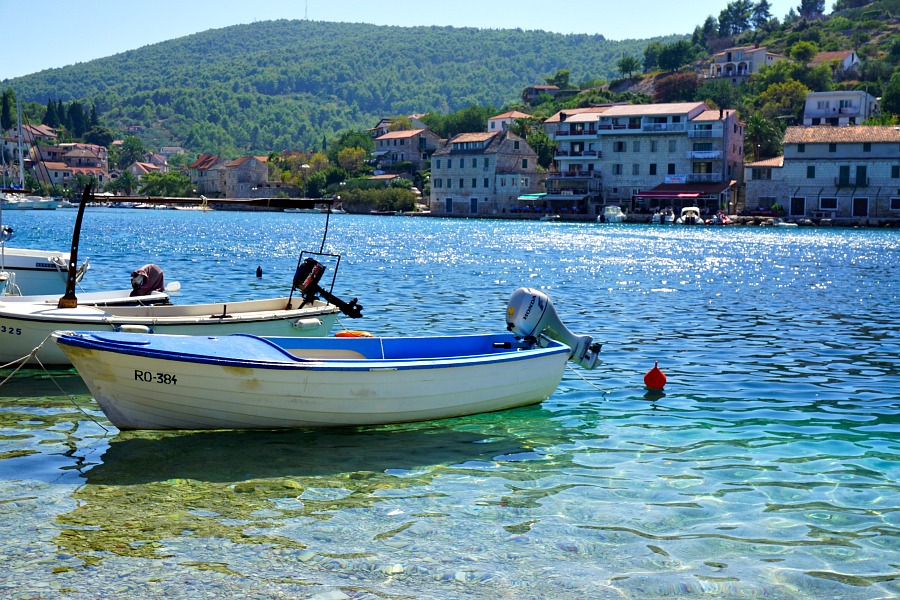 We sat at a restaurant in the harbor, looking around for any form of transportation to Stomorska (11.4 km or 7 miles away).

We asked our waitress about hiring a taxi and she confirmed that the bus and taxis were only there when the ferry arrived.

Despite that she hurried into the restaurant, and after some negotiation returned with a volunteer.

Our new, round, friendly and would-be taxi driver, explained that he had a free 1/2 hour and would be happy to take us.

We gratefully piled into his car and started off on the narrow windy road toward Stomorska.

As it turned out volunteer was a long time Solta resident and the father of the restaurant owner. His wife of 40 years, he explained, was also the restaurant’s chef.

He rubbed his ample stomach and confided “My wife is an excellent cook. I blame her for my extra kilos, because, as I tell her, she is much better in the kitchen than in the bedroom.”

His mischievous eyes twinkled as we surged forward, past olive trees and panoramic views of the island.

Along the way, our driver pointed out agricultural areas and told us about the wonderful wines, honey and olive oil produced on the island.

Apparently, Solta also produces colorful characters and we were delighted that our bus error resulted in the chance meeting that was the highlight of our day. 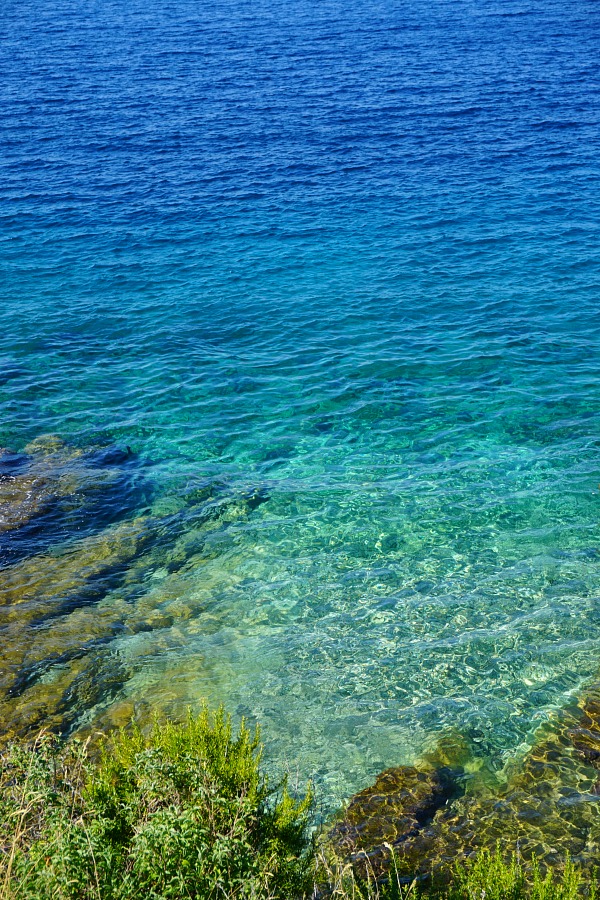 Once we reached Stomorska we said good-bye to our new friend and took in the scenery. There were restaurants, shops and hotels scattered around the marina along with boats offering tours.

Despite it being high tourist season the area was relatively sleepy and uncrowded – which was just as we had hoped. 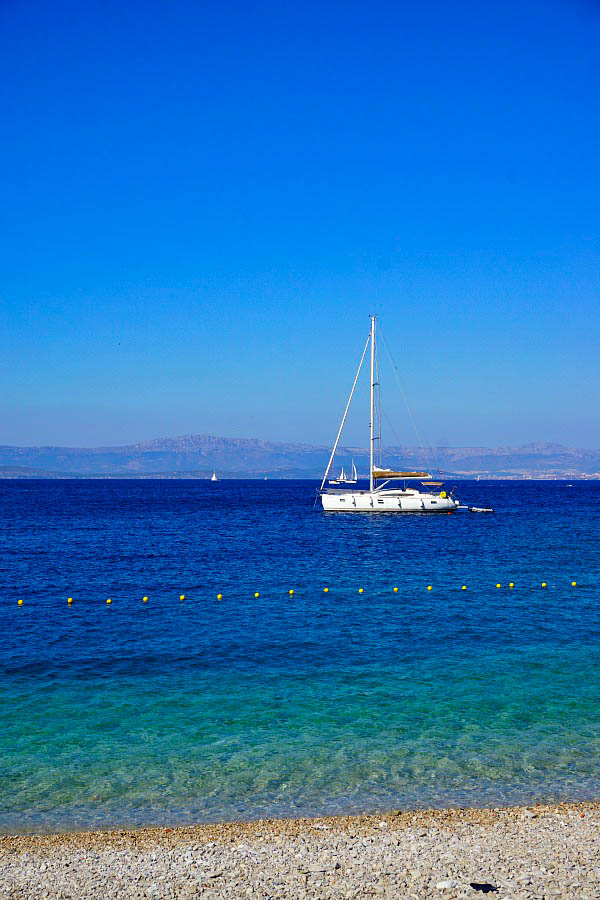 We took a short walk and joined a few other people lazing on a pebble beach. Then we and dunked our toes in the chilly water.

Further along the coast there were areas where people were sunbathing on rocks and jumping into the crystal blue water.

Our favorite bather was this playful dog, who seemed enjoy the day on the water more than anyone else we encountered during our entire visit. That is, with the exception of our volunteer driver. 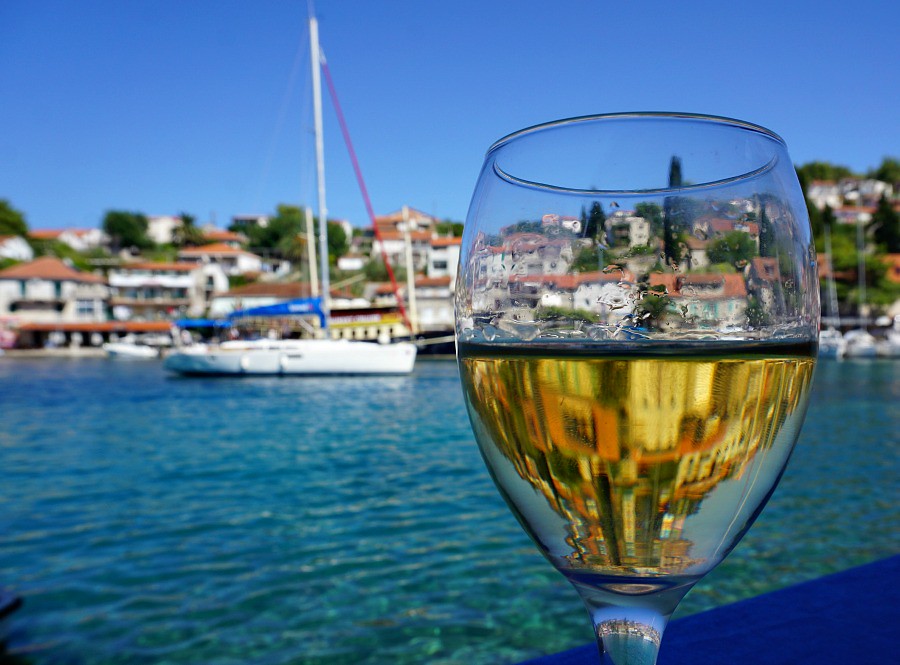 Dining with a view on Solta Croatia

There were plenty of options for a late lunch, so deciding on a restaurant was a little difficult. Most of the menus seemed to feature the same fresh seafood and pasta dishes, so we made our decision based on the restaurant that gave us the best sea view.

I’ll admit that it wasn’t our best meal in Croatia, but that didn’t stop us from lingering over lunch and considering coming back for overnight visit.

Our driver had told us that from Solta we could be able to see the most stunning sunsets we’d ever experience. Unfortunately, that wouldn’t be today.

The bus back to the ferry arrives about an hour before departure. The ferries run regularly to and from Solta, according the current ferry schedule.

In retrospect, we wondered whether we should have taken an earlier bus back to Rogac so that we could dine at our friend’s restaurant, where he insisted he was able to source the best and freshest seafood at the best prices.

All prepared by his wife, whose culinary skills had been clearly demonstrated by his ample waistline.

I’ll leave that as a departing recommendation, although the name of our driver and his family restaurant eludes our memory.

I don’t recall seeing another waterfront dining option in Rogac, though. We’ll be happy to hear if anyone else encounters a friendly restaurateur in Rogac, and if his seafood is as wonderful as he boasts.

My guess is that it is as good if not better!

Tempted to plan a visit? Pin or bookmark this post for later! 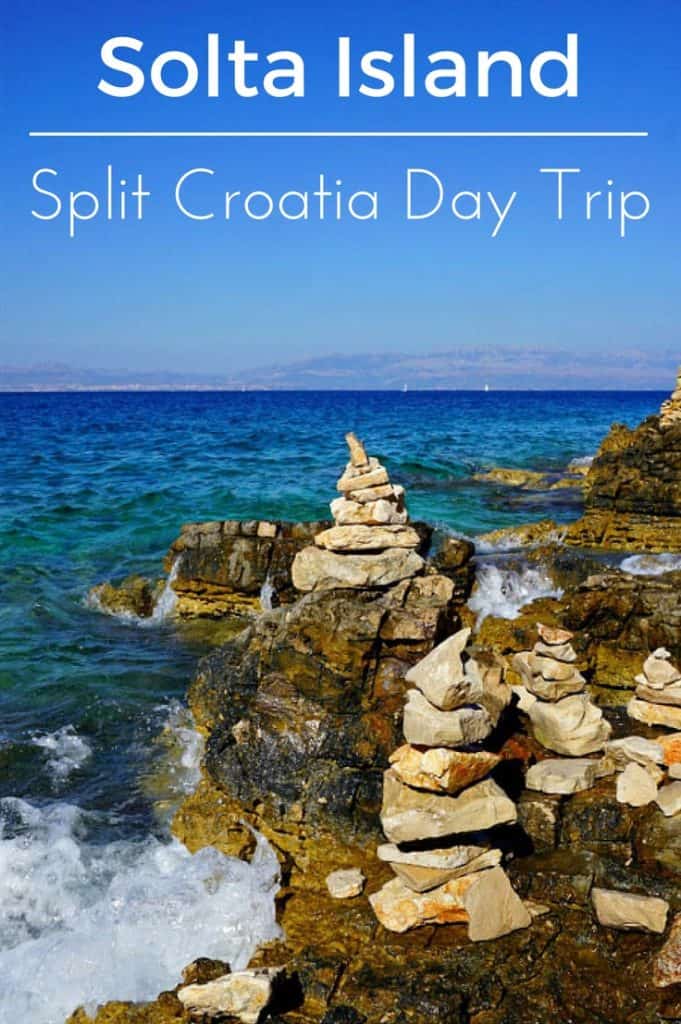 Hi Sean and Jen, I am glad you liked Å olta :-) I visited this summer too and had a great time. Quiet and scenic, just what i needed. Have you heard that local honey on Å olta is one of the best in the world? Especially the rosemary one. Next time you go there, make sure to check it out :-)

Solta looks amazing! Split is on our travel wish list for next year and would love to visit Solta as well :)