Paragliding in Medellin was one of the most memorable adventures from our trip. Me for jumping off the cliff, and my wife Jen, very memorably praying for my safe return to the ground.

Medellin, Colombia generally isn’t known as an adrenaline sports haven (unless you count taking the public bus on busy streets).

There is one thrill-seeking activity that Medellin is known for and can’t be missed: paragliding.

If you’re not familiar, paragliding is similar to skydiving. Instead of jumping out of a plane, you utilize the updraft off a mountainside to fly UP, rather than just down.

Newbies are paired with an experienced pilot and you fly tandem. The mountains surrounding Medellin make a perfect launching point for paragliding.

I knew our stay here wouldn’t be complete without trying it. I tried to convince Jen (who has a notorious fear of heights) to try it too.

Her response: “You want to strap me to a complete stranger, run off a cliff and hope that a cloth hankie hung over my head by threads will keep me from falling to my death? I don’t think so. But, you have fun!”

She did, however, agree to come along and document my jump.

Why try Paragliding in Medellin? 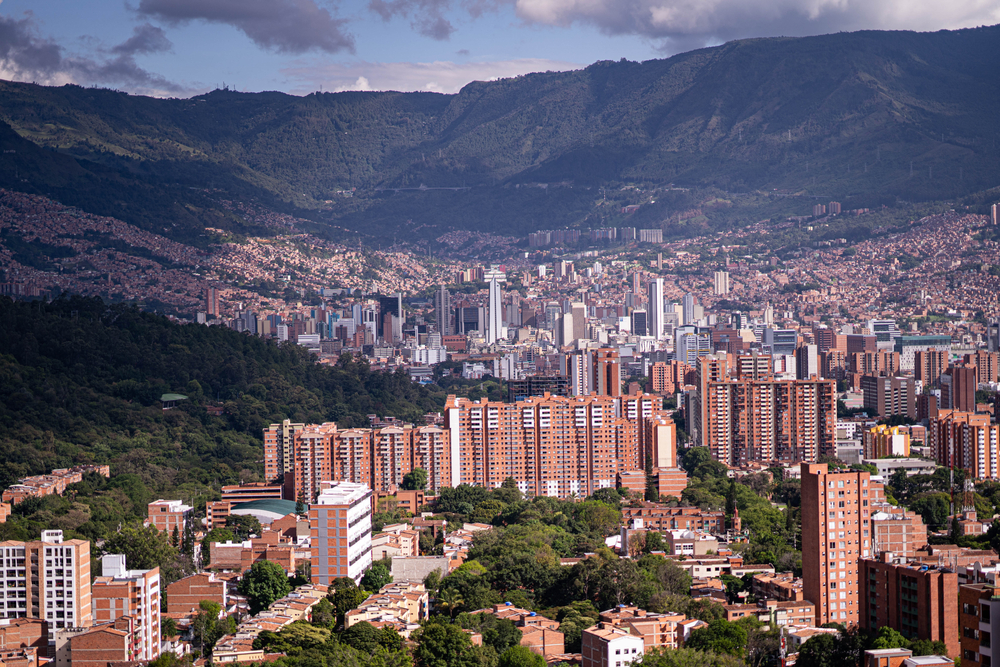 Medellin is located in the Aburrá Valley in a large metropolitan area, surrounded by the steep mountains of the Colombian Andes. Because it is a well populated area, there are plenty of things to do in Medellin.

There are also some fantastic day trips from Medellin, where you can find sights such as the Piedra del Peñol in Guatapé.

Being surrounded by steep mountain ranges makes Medellin an ideal location for paragliding. The views on such adventures are unforgetable. When is the Best Time to go to Medellin?

Medellin is nicknamed the “City of Eternal Spring” because of it’s year-round mild temperatures. 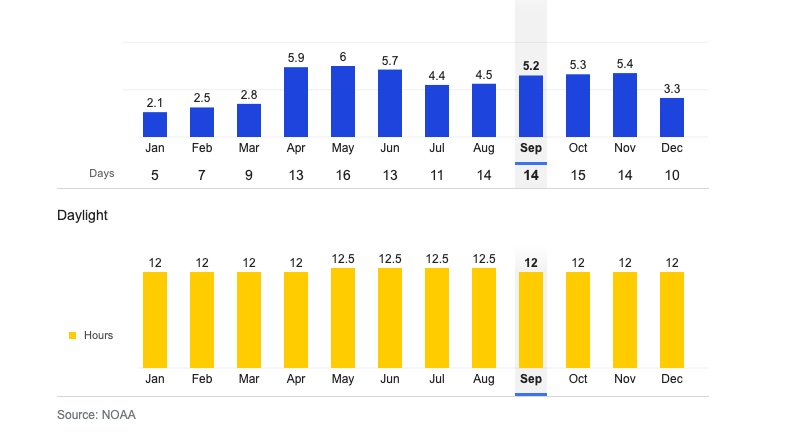 The dry season, roughly from December to February is a good time. But given the overall annual weather, the best time to go is whenever you like!

Back to Our Paragliding Adventure!

Our guides picked us up near our apartment, and we climbed into the van, full of anticipation and nervous energy.

For the fifty minute ride, the van struggled up ever steeper and bumpier roads until we arrived at the staging area, where the packs with the chutes and harnesses were loaded.

From here, we were able to see canopies flying over the valley. I have to admit, I began to get a little nervous — was I really going to do this?

Then, we were bundled off to the launch pad. 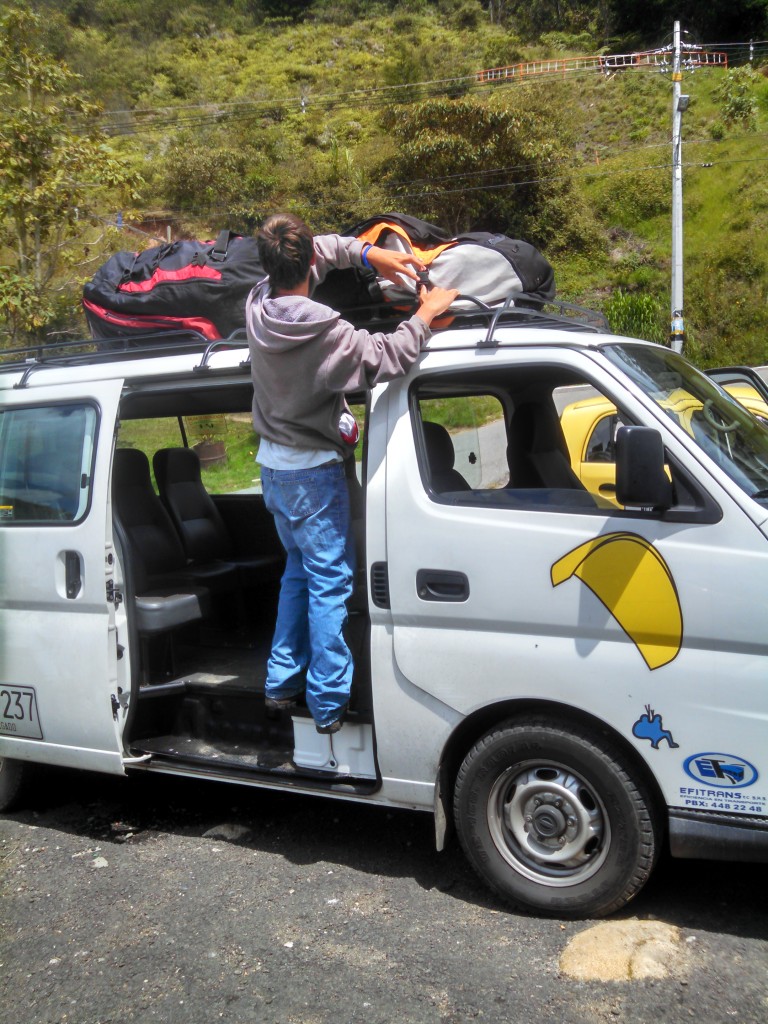 Loading up the van before heading to the launch zone

The view from the top of the hill was spectacular, with all of Medellin spread below us.

I didn’t get much time to sit and take it in, as they pointed to me as one of the first group to go.

Now, Jen and I have both been working on our Spanish, but we’re nowhere near fluent. I hoped that the safety briefing would be in English — but, I didn’t need to worry.

When my turn came, one of the team walked over to me with the harness, and without a word, strapped me in.

He pointed to the seat-like contraption hanging behind my legs and said “when you take off, sit”. Safety briefing complete! 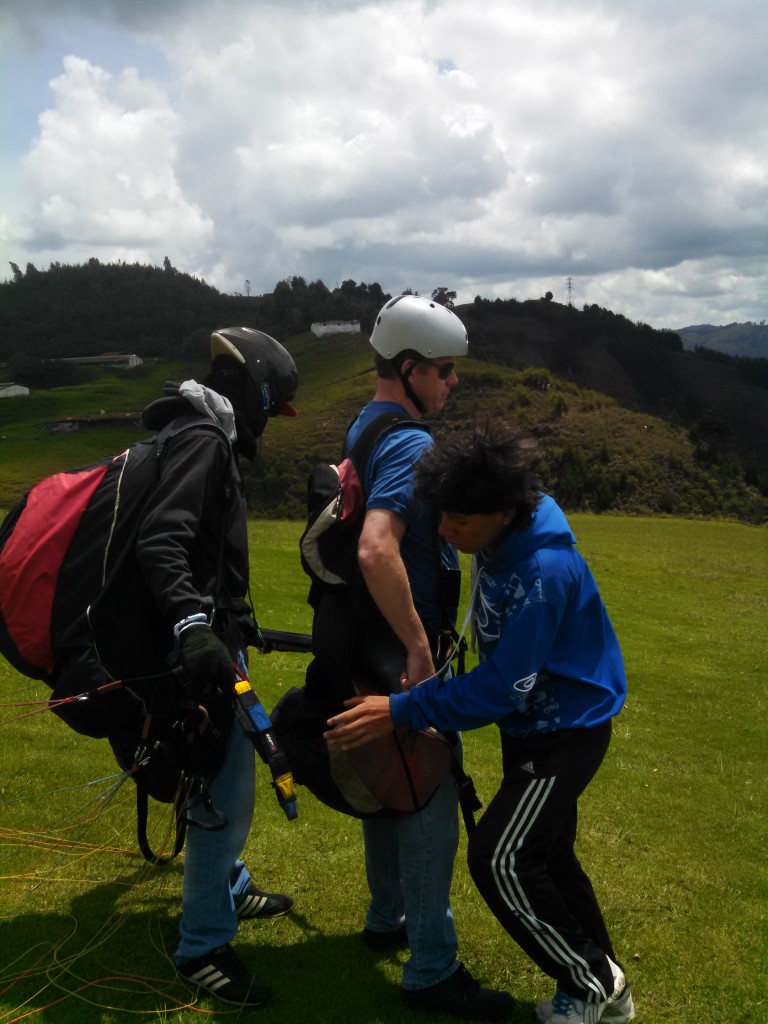 Jumping Off a Cliff in Medellin

I was then led over to the canopy lying on the ground and attached to it.

I introduced myself to Daniel, my tandem flight pilot, who was clipping in behind me.

Trying to funny, I asked him if it was his first time flying. He didn’t skip a beat, and promptly answered, “Yep, my first time. You too?”

Then the canopy was lifted into the air, the harness tugged me backwards, and the guys on either side of me yelled “Run!” 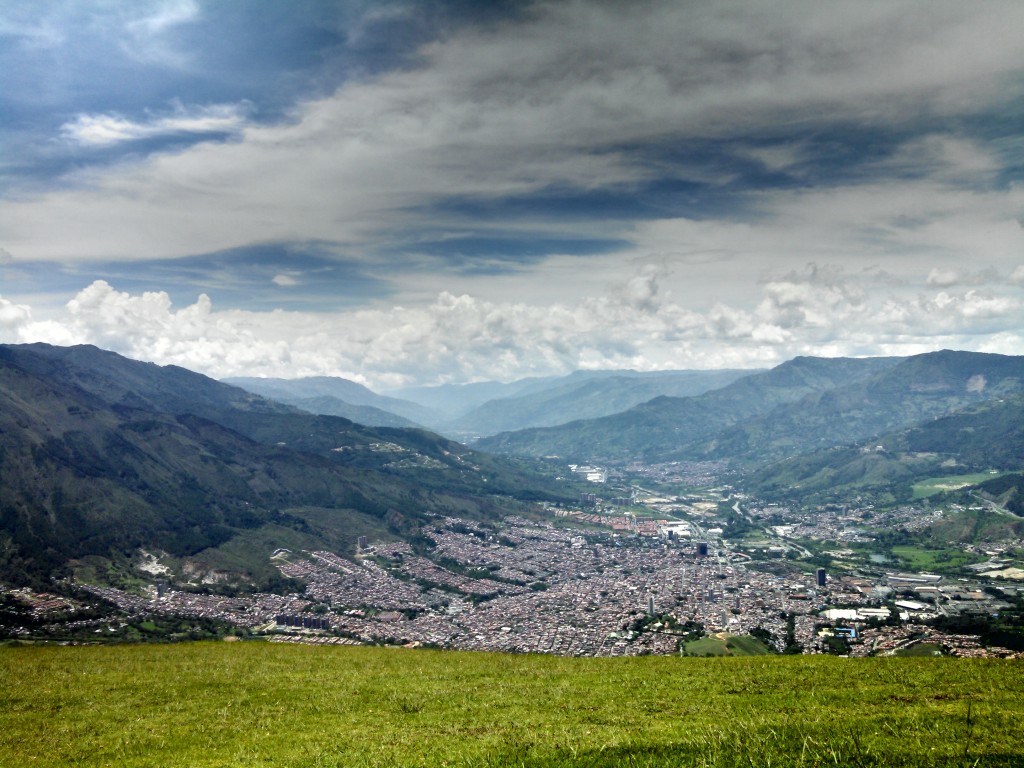 I’m going to jump off of this?

This was a surreal moment,  being strapped to stranger making a mad dash towards a cliff. I was ignoring all of the warning bells going off in my head advising against it.

Luckily I’m pretty well practiced at being unyielding to voices of reason.  I ran. After a few steps, my feet were in the air. We were flying! 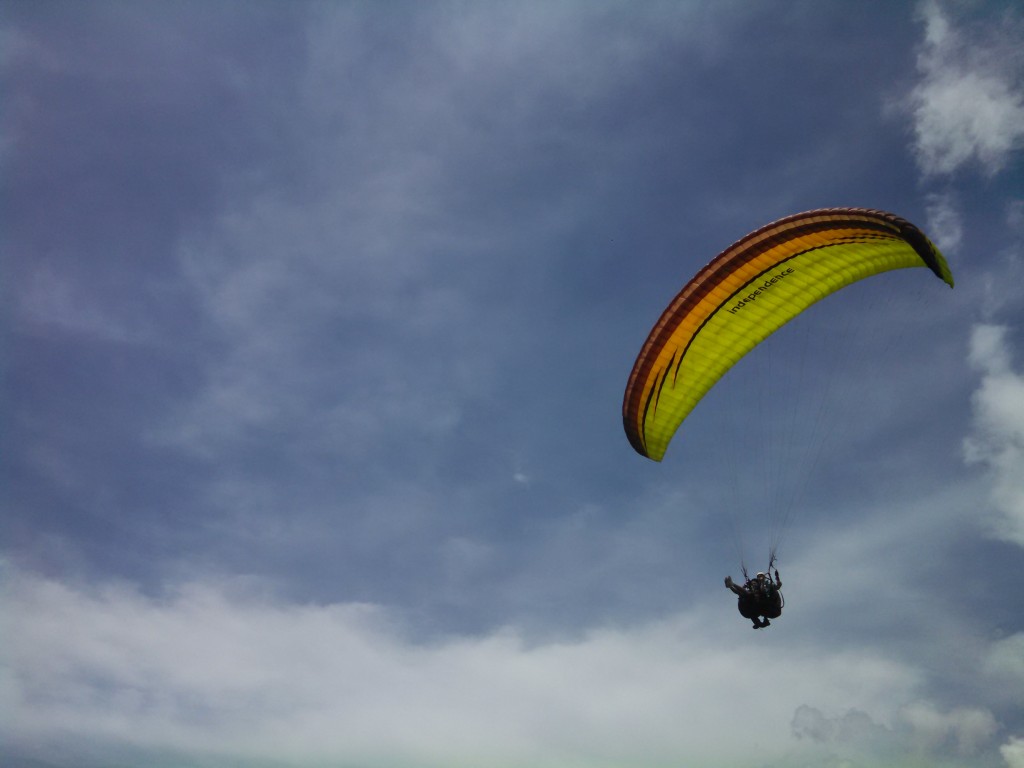 For thirty minutes, we flew over the valley, riding updrafts up hundreds of feet, soaring above houses, farms, and even birds and other paragliders.

We even did some “tricks”, rocking back and forth until we were parallel to the canopy (not for the feint of heart!), before finally coasting in for to land where we took off. 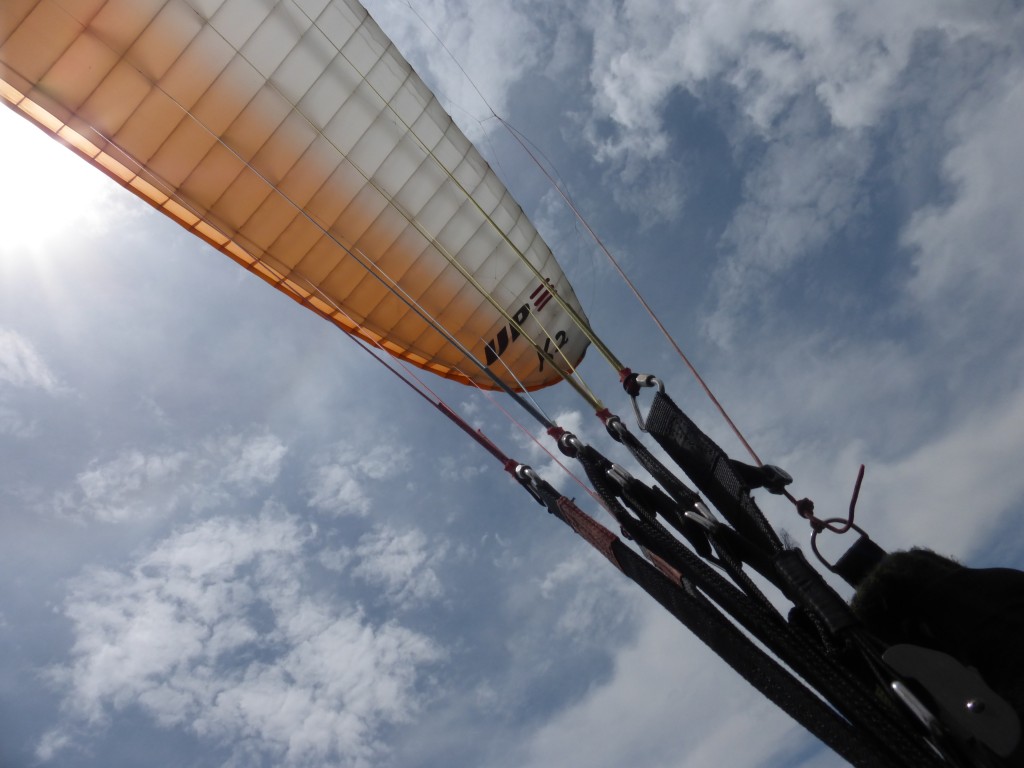 “The hankie” from below 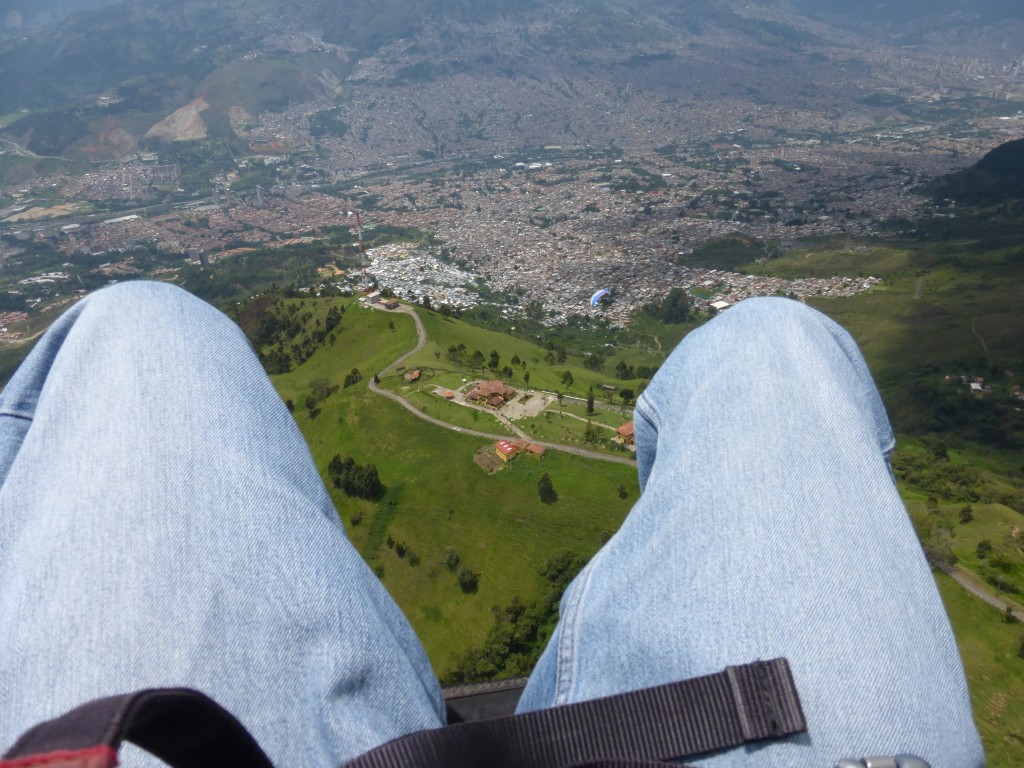 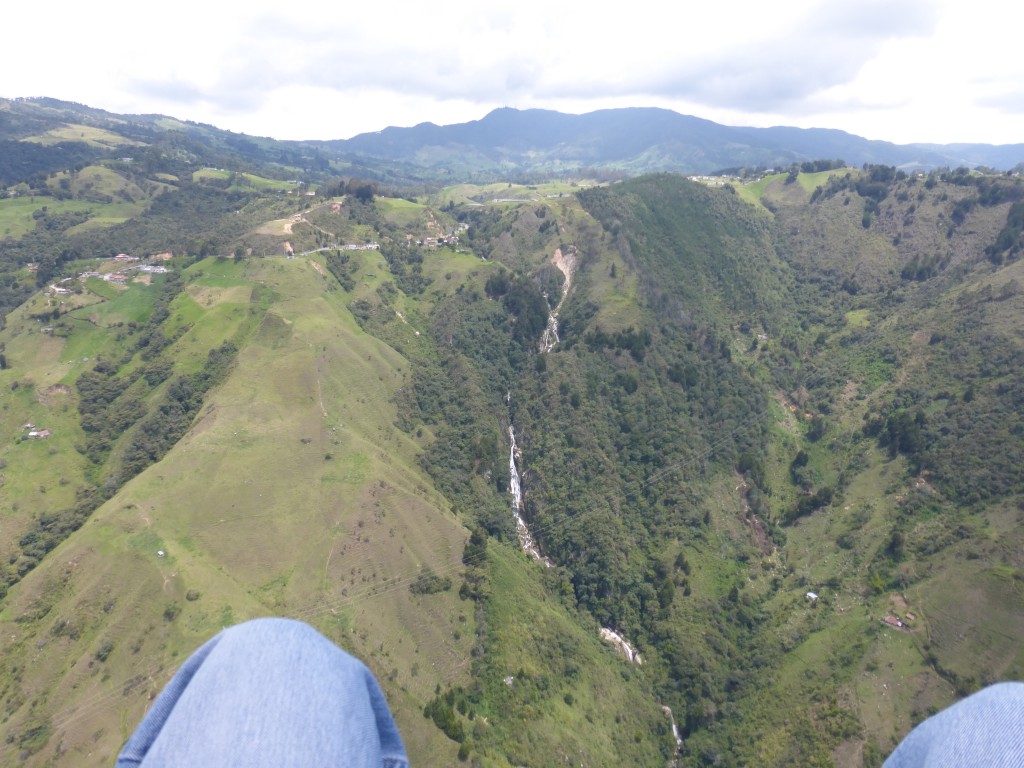 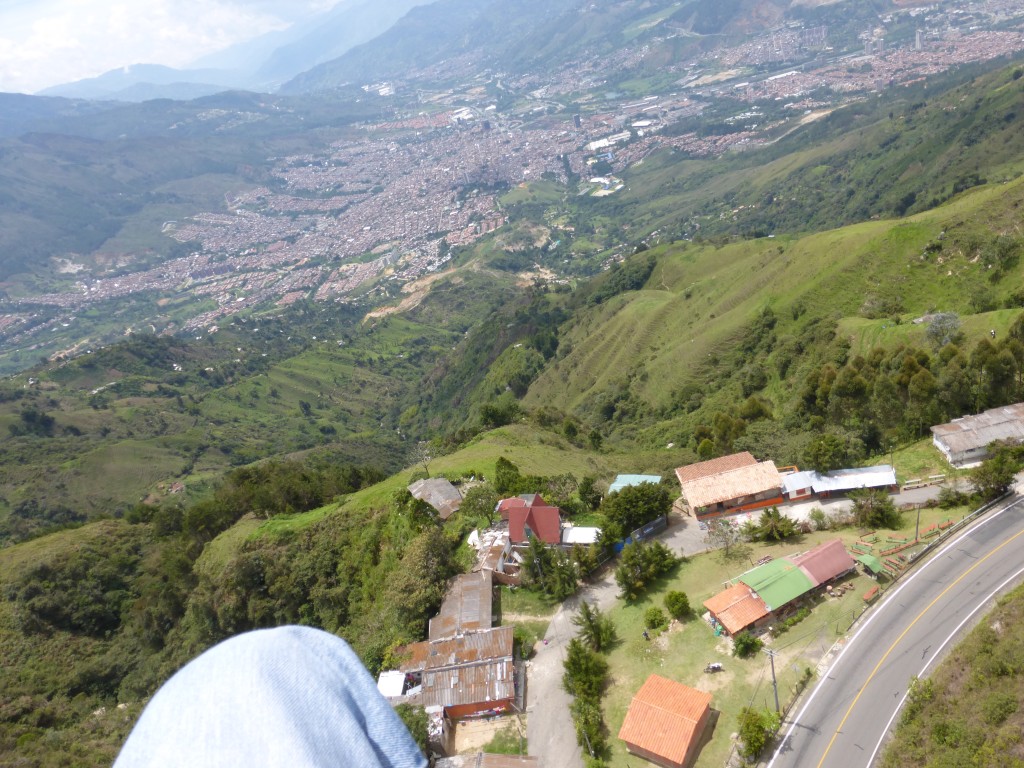 View from my Paragliding Adventure 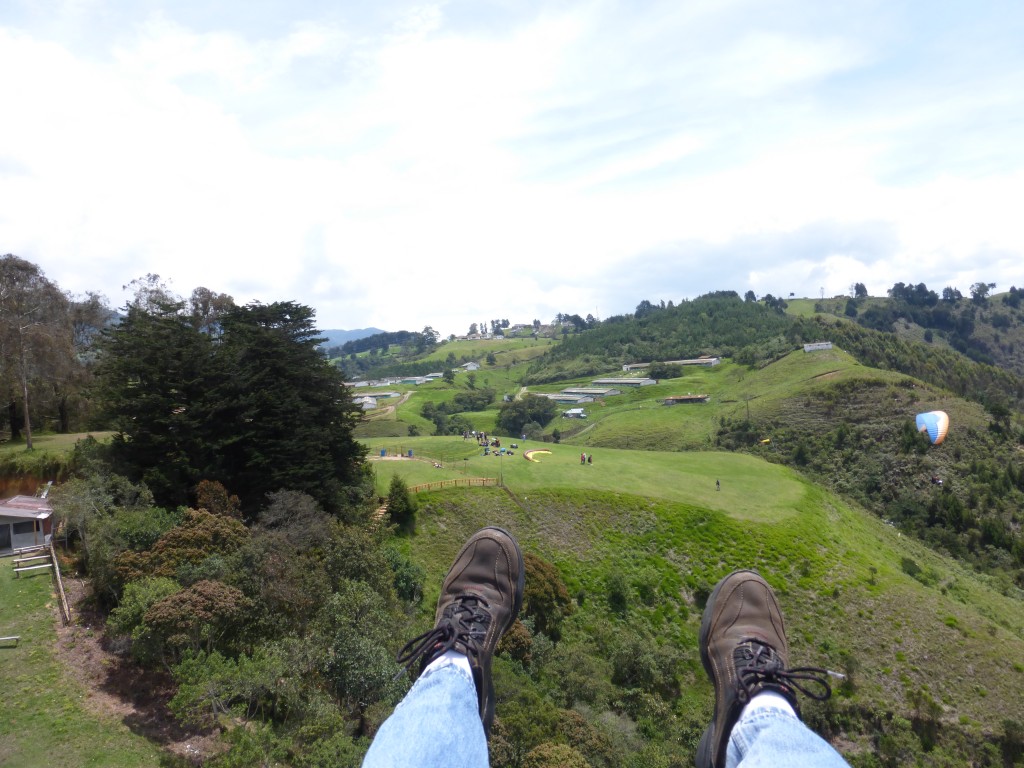 Coming in for the landing

Safely Back on the Ground

Jen even mentioned the next day that she had a tiny pang of regret that she didn’t try it.

I don’t think that feeling lasted much past watching some bird’s eye view video:

Related articles about travel in Colombia: 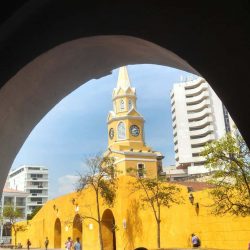 OH my, I would LOVE this experience!! I would be terrified but at the same time, I still want to try it out, haha. It must had been an incredible experience for you! Were you scared when you guys did some tricks?

Never tried this activity before. It sure would pump you up with adrenaline! That's a great video to put it all in perspective :)

I still haven't tried paragliding yet... Just need to summon up a bit of courage first i think!

Looks super fun, and yes, I do count the public bus on busy streets as adventure :D!

I'll have to live vicariously through you on this adventure. I'd be like Jen and stay with my feet firmly on the ground. The photos and video are really amazing.