In Singapore, the best (and cheapest) food is found at the hawker centers. This, as you can imagine, makes the hawker centers immensely popular. Just stop in around lunch or dinner time and you’ll see long lines at the favorite stalls.

Sadly, we learned during a recent visit to Singapore that hawker stands are at some risk of dying out. The long hours and low pay have taken their toll on these often family run stands. The lifestyle isn’t very attractive to the younger generations who have less strenuous choices for making a living. Because of this, many of the old recipes are being lost.

We learned that there is a cooking school in Singapore, Food Playground, who employs home cooks who teach students recipes that have been made in their families for generations. Some of the recipes has never before been written down. The opportunity to make authentic Singapore hawker style dishes and spend time with locals was too much of a fun and interesting cultural experience that we signed up for a class right away. That, it turns out, was probably the best decision, and day, of our trip to Singapore.

There were several classes to choose from, and making a decision was not easy. Some of Singapore’s most popular dishes, such as Spicy Shrimp Sambal, Curry Puffs, Hainanese Chicken, Nasi Lemak (coconut curry rice), Satay, and Laksa (coconut curry soup) are all on the course schedule. We finally signed up for the class making Chicken Curry, from scratch. Weirdly, after eating so much yellow curry in our lives we struggled to come up with an ingredient list our heads. We soon found out from our teachers that this was pretty common. It was also about to change.

We began the class by testing our knowledge about typical Singapore Hawker Stall food by playing a little game. The school has come to understand that most visitors don’t know much about Singapore’s cuisine, and therefore miss out on a lot of great food during their visit. It became apparent possessing limited knowledge of the local cuisine was true of us, along with the other six international students in our class.

We started out with a game in which teams tried matching pictures of Singapore specialties with their names. After having spent a few weeks in Singapore, we thought we knew the food pretty well. Our ability to match up pictures of each dish with its name and description of exactly what it was proved to be about 50% on target.

I mean, confess, would you know what the heck this is? 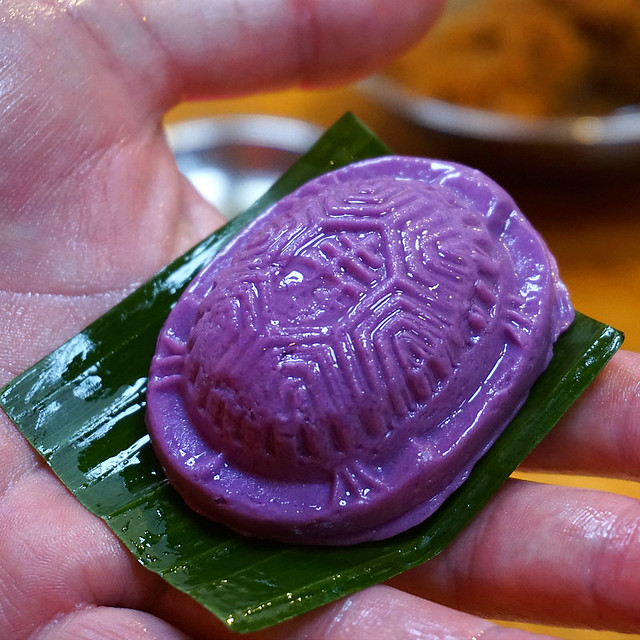 Once we were thoroughly schooled on the diversity of Singaporean cuisine, we were ready to get cooking. In the three-hour class, we would prepare, from scratch (under the watchful eye of our patient instructors) three distinct dishes:

The draw of this dish was preparing the curry from scratch using individual ingredients. Usually at home (and at many cooking classes), we’ll take the shortcut and start with prepared curry paste. More often than not, we’ll just shake some dry powder out of a spice glass jar. Not here!

Roti is a thin bread that is usually served with Indian curries. There are many different types, from plain to stuffed (and we’ve sampled lots of them). But we hadn’t tried, or even seen or knew Roti Jala existed before this class. Literally translated as “net bread”, Roti Jala is more of a delicate lace or latticework of dough. We learned that you can rarely find it in hawker stands or stores these days, because it’s quite time-consuming to individually cook each delicate piece of bread. But the stuff is makes for an interesting presentation, and as advertised, sops up the curry pretty effectively.

This snack or dessert isn’t a typical one for the Western palette. They are small oval-shaped pastries wrapped around a sweet filling. Made with sticky rice flour, they have a glutinous texture that is quite different. They are made in a wooden or plastic mold resembling a tortoise.

In the Chinese culture, eating tortoises is believed to result. longevity, good fortune, and prosperity. These cakes are eaten on holidays such as the Chinese New Year, as well as celebrations of all sort.

Once we got started, the chefs moved the teams around the kitchen like dance instructors. We were making recipes and using tools or techniques that were all very new to us. They had us all orchestrated in our tasks like we were pros. Or so they made us feel. Which, admittedly, could not have been an easy job.

We started making the dough for the pastries. In this class we weren’t making red tortoise pastries, but instead blue (or purple) tortoise cake. The popularity of the Ang Ku Kueh have resulted in all sorts of variations of colors and fillings. Our blue color came from a blue mashed sweet potato mixed in with the dough. We would be filling them with toasted coconut.

Making the dough went as one would expect, with one difference. In order to enhance the “gelatinous” texture, we took a small portion of the rice flour mixture, and dropped it in boiling water. After a few minutes, this portion was kneaded back in to the rest. Once the dough had risen, the time came to make our tortoises.

The plastic mold was the key to this process. We generously oiled them, and then pressed the dough into the mold. I was reminded of playing with play-dough as a kid. Making the shiny red tortoises, the cooking school name of “Food Playground” became apparent.

We added the coconut, and then pulled the dough around the filling until everything was pressed into the mold. Then came the hard part – getting the pastry out of the mold. This took a combination of finesse and brute strength, banging the tool on the edge of the table, while trying to not drop the dough on the floor. And, I’m happy to report, nobody did.

We then steamed the pastries in bamboo steamers, and let them cool.

For the Roti Jala, we mixed the ingredients into a batter similar to a pancake batter (but a little thinner). We had a special tool for this food, as well – a small cup with multiple holes in it.

Preparing the roti properly was the result of a few variables. The batter needed the proper consistency, and dripping it into the pan needed the proper speed and optimal height (one inch was optimal). The instructors, who had clearly a LOT more experience, did this effortlessly. Our attempts weren’t as smooth, but everyone eventually made some acceptable roti.

Making the aromatic curry mixture involved some muscle. We took turns grinding the spices with the mortar and pestle. After what felt like an hour (and was probably more like 15 minutes), our arms were aching. Showing pity on us weaklings, the chef examined the mixture and declared the mixture “forgivably rustic.” It was clearly not up to her normal standards, but since it meant lunch was one step closer to being served, we decided that was good enough for us.

Since this was a three-hour class, we were also informed that we weren’t going to give the curry its proper due for another reason. Curry, we learned, is meant to sit overnight to let the flavors to meld together. Our one hour curry wouldn’t have the complexity of a curry prepared well in advance, but we found it exceptional nonetheless.

Once our three dishes were complete, our favorite time of the cooking class commenced: we sat down to eat. The curry was flavorful from the roasted curry paste, with the coconut milk adding a bit of sweetness. The Roti Jala fell apart in our mouths.

The tortoise pastry was, well, unique. We’re not used to desserts with this sort of consistency, so that was a new experience. The sweetness of the pastry and the toasted coconut worked very well together.

Time for Some Singapore Culture

While we ate the instructors told us some stories about home cooking in Singapore. One teacher told us about turning dishes from her childhood into recipes for the class. The proven family recipes had to be painstakingly extracted from a relatives, who always cook by memory.

One chef described trying to get the recipe from her father as an ordeal. He never measured anything, and she had to pepper him with questions to get the measurements and techniques. He grew frustrated with her questions, saying that she was interrupting the “flow” of his cooking.

We realized how special the gift of the recipes we were given to take home were. Particularly because the teachers and the school are well aware that cooking food traditionally in Singapore is becoming more rare. This class was a truly a love letter to Singapore and its cuisine.

While socializing with the instructors and other guests, we learned a little more about the school. In addition to providing classes for tourists, they also do a lot of corporate team-building events. The Food Playground also employs chefs who are stay-at-home moms, or women with older children trying to re-enter workforce. They explained that in Singapore, it’s very difficult to re-enter employment after having been at home for a while.

For the moms with younger kids, the classes allow for a flexible schedule so they can work while their children are in school. It was nice to know that in addition to learning a little about Singaporean cuisine and culture, having a delicious meal, and getting some authentic recipes to take home, we were also helping out in some small way. Which all makes for a special experience in Singapore that, as we are sure you can guess, we highly recommend.

Visit our Cooking Classes and Food Tours section to view our articles about culinary experiences around the world.

Want to try to cook some of the local specialties yourself? Check out some of our favorite Singaporean/Malaysian recipes: