Trastevere, we decided, is one of the best neighborhoods in Rome. We took a walking tour of Trastevere and were enchanted for a number of reasons.

Rome is made up of many distinct areas, each with its own characteristics and charms. Each with fiercely loyal locals who consider the Roman neighborhood where they have lived, for generations, the very best.

Such is the case for the Roman neighborhood of Trastevere.  Trastevere (which means “across the river”) was populated by immigrants from the eastern portions of the empire in the early days of the Roman Empire. 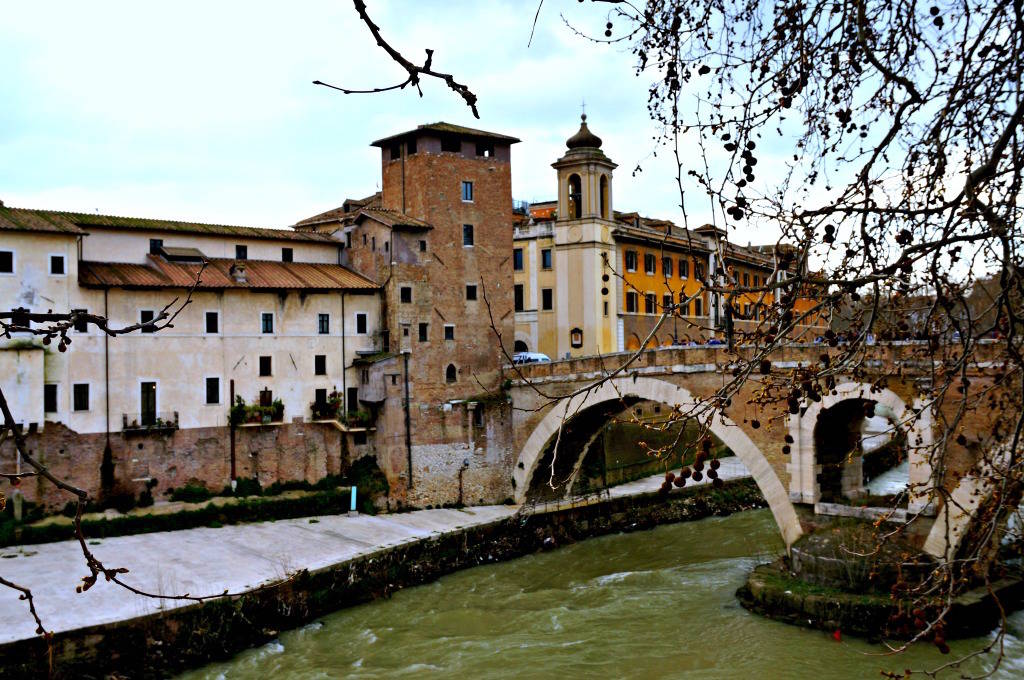 It served as an important trading and market area, but today is better known for the many bars and restaurants that line its narrow streets.

Today, the area offers a great break from the busy crowds at the well-known touristic attractions and gives you a glimpse into what it means to be Roman.

A Tranquil Island Away From the Crowds in Rome

We started our visit to Trastevere by wandering on the Tiber Island, a small island in the river between the district and the old Jewish Ghetto.

Here you can see several temples, visit the hospital that was founded in 1584 and is still operational, and see the remnants of an original structure on the island that was originally designed to give it the shape of a boat. 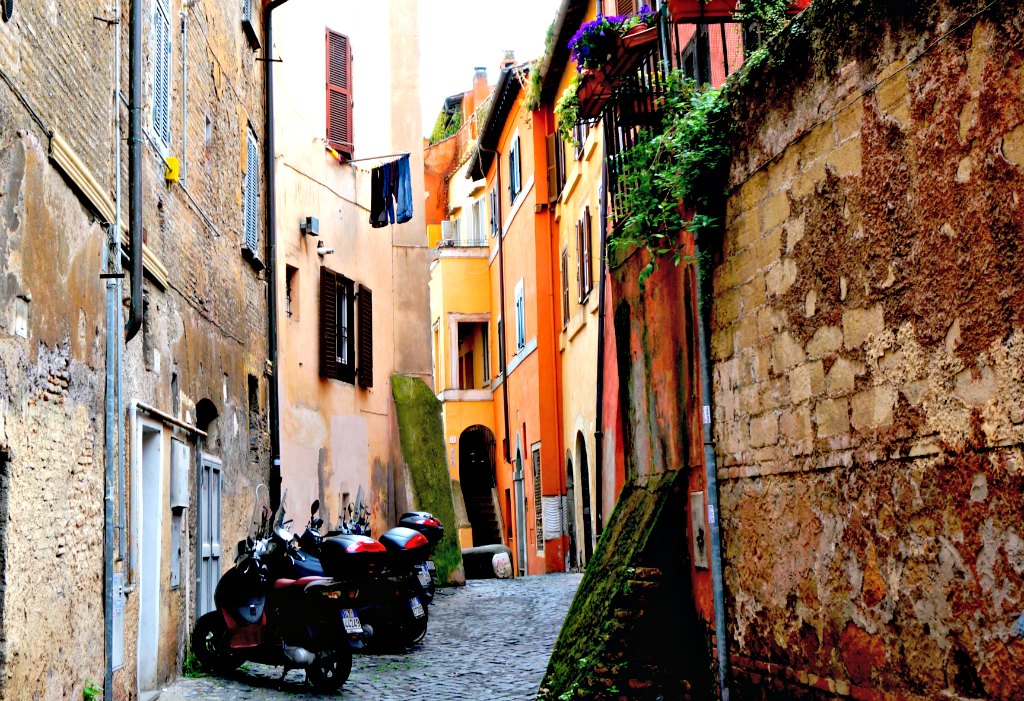 Wandering away from the river, the streets narrow, making it easy to get lost in the small and twisted streets. The frequent passing local heading off on their scooters kept us on our toes. 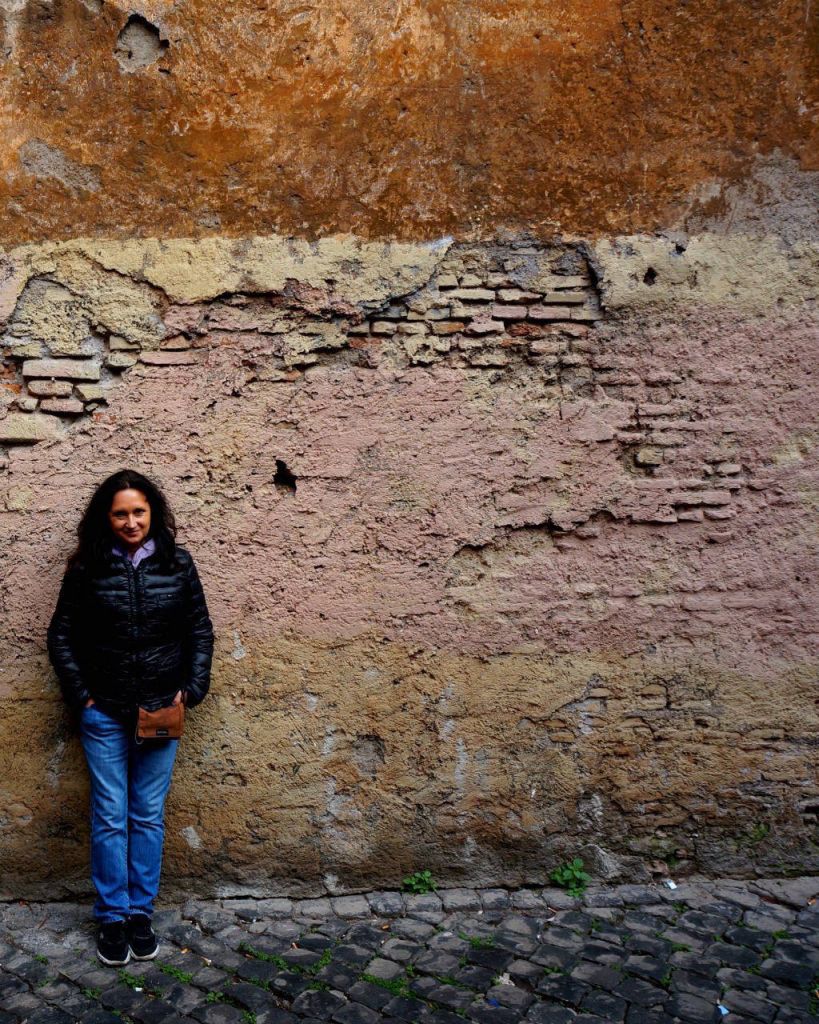 Black Volcanic Stones in the Streets of Trastevere

It was nice to slow down and see great examples of the historic architecture.

Everything from streets made of carved black volcanic stones, to building hundreds of years old with some original brick that were once manufactured in Rome peeking through the plaster walls. 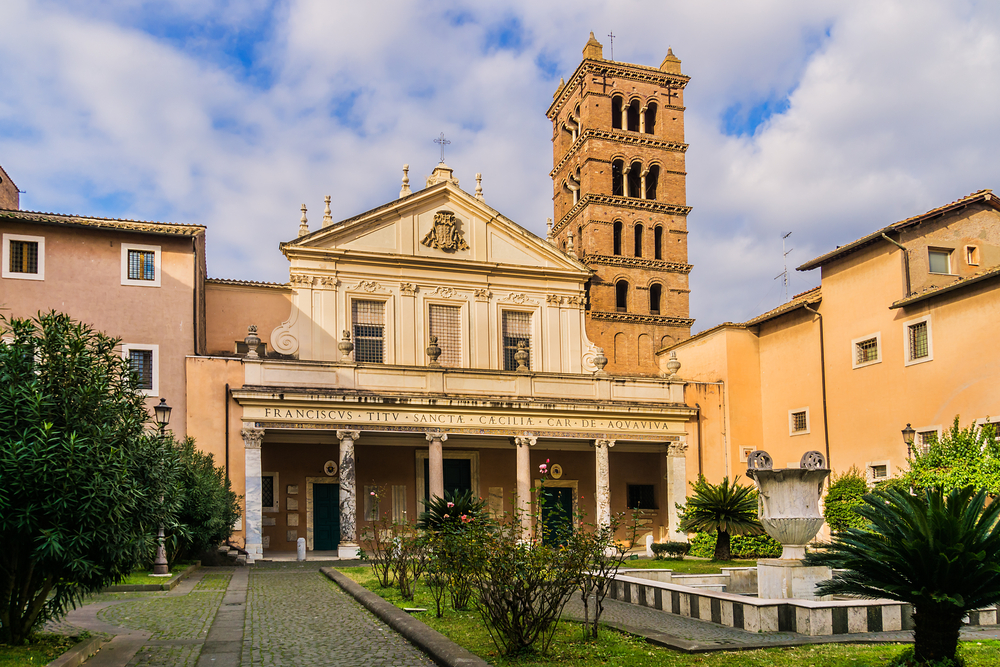 Like most of Rome, Trastevere has its share of churches. Perhaps one of the most interesting is the Basílica of Santa Cecilia.

One of the focal points of the church is the Baroque sculpture of St. Cecilia, an early Christian martyr.

According to legend, when Cecilia’s tomb was opened almost a thousand years after her death in 1599, her body was found perfectly preserved.

This sculpture is a representation of how she was found in her tomb. 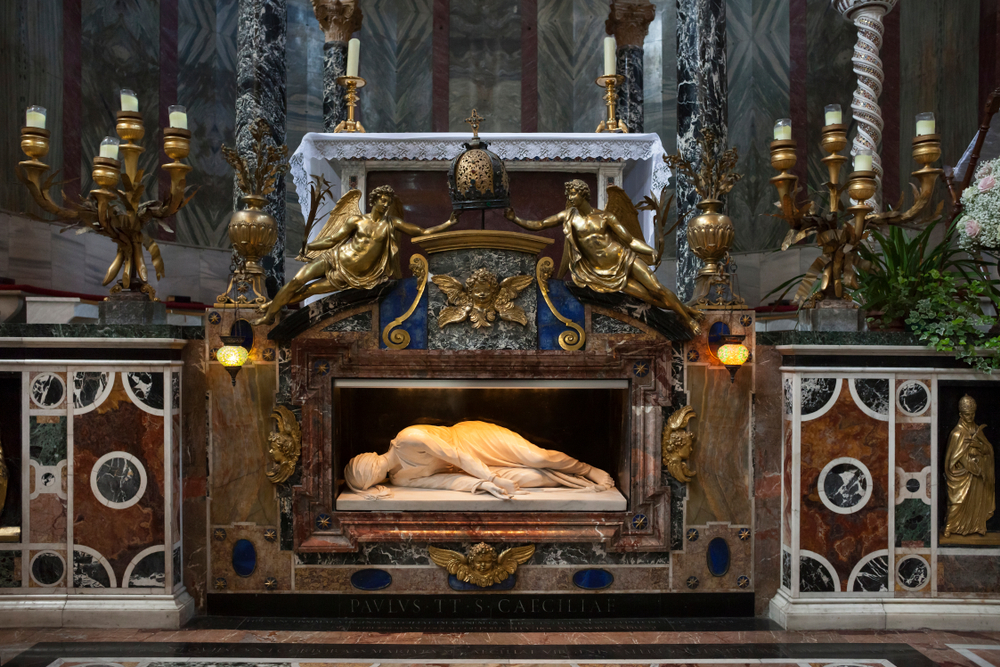 One of other things you’ll notice is that the columns of the church are all different, like the architect couldn’t decide on just one style. 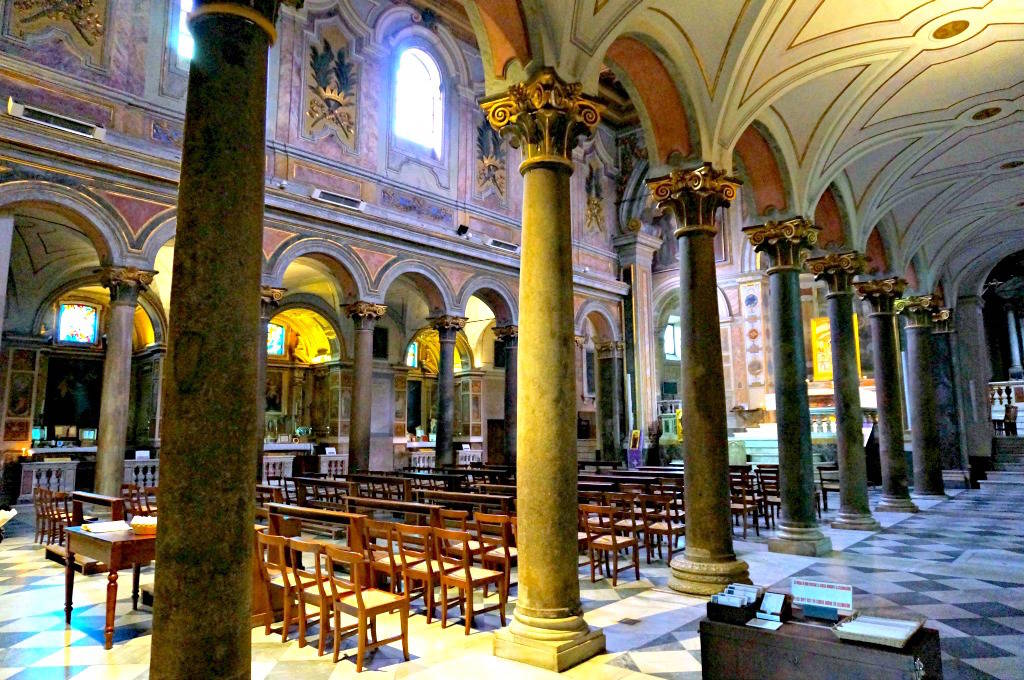 The columns are actually from other sites. Recycling and re-use of decorative elements from older historical sites is common in churches throughout Rome. 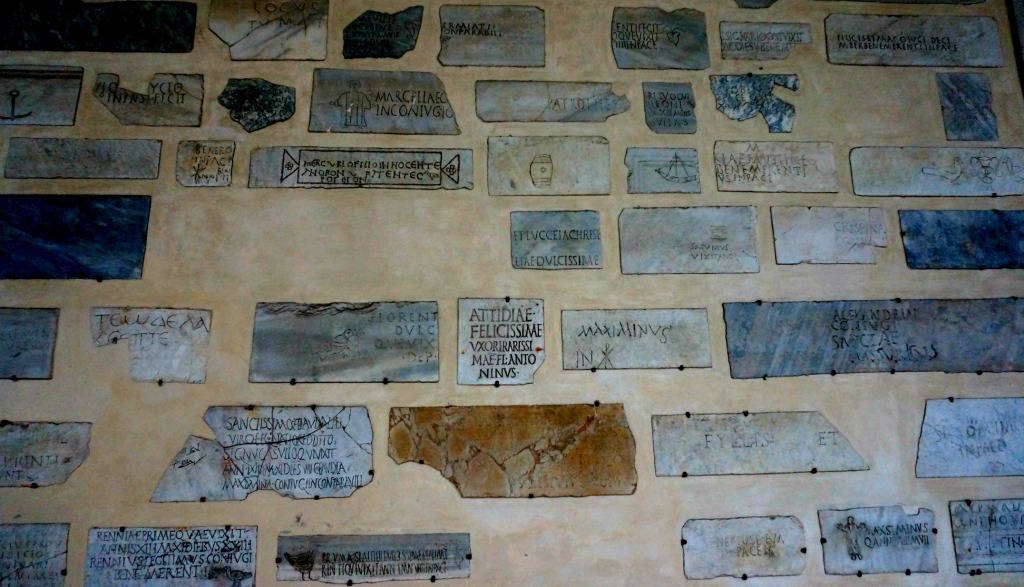 Throughout the neighborhood are bars and restaurants tempting you inside with the smell of Italian food cooking and the sight of bowls of pasta and thin crusted pizza parading by. 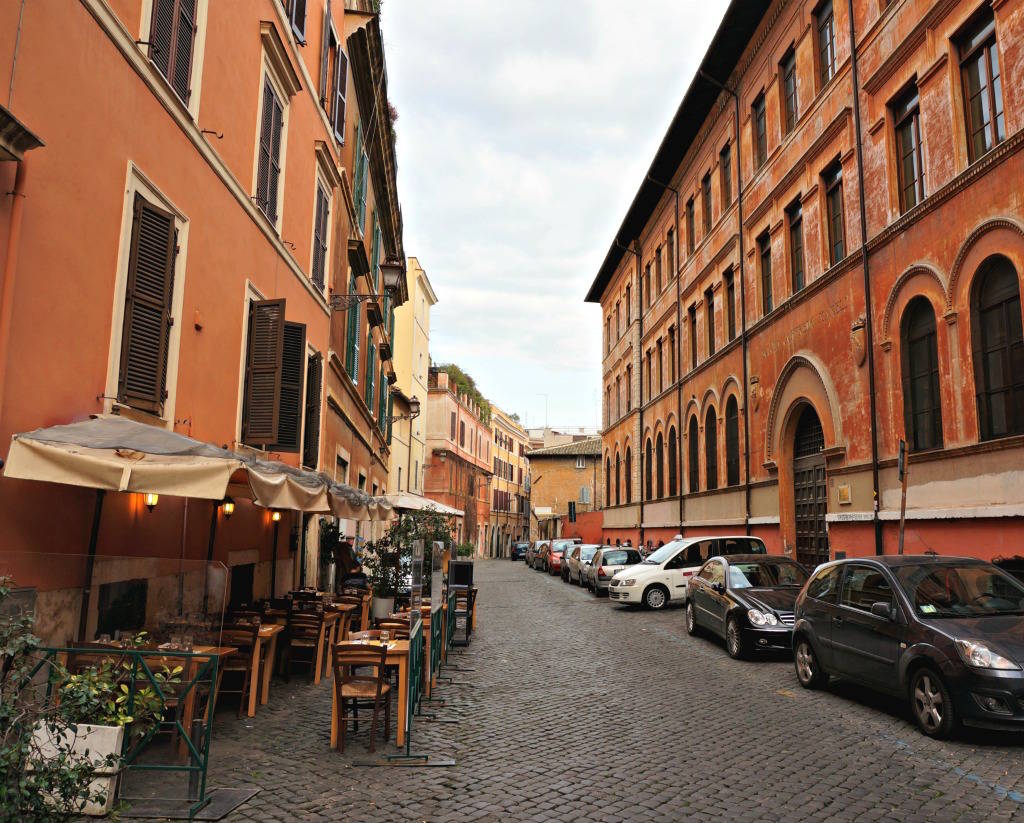 On a visit to the area, you can find many superlative but lesser known spots in Rome.

The best gelato: Gelateria Alla Scala? Fior di Luna? Gelateria del Teatro? Too many choices….Ok, so perhaps all of this is up for debate, unless you ask someone from Trastevere, and they’ll have their own opinion!

Another option is to take this amazing street food tour and to sample the best food in Trastevere with a local expert!

Map of the many wonderful Restaurants in Trastevere

If you decide to visit, find yourself a local to tag along with or you may miss some of the charms (and a lot of the history) that Trastevere has to offer.

We wandered the streets with Vanessa from Urban Adventures Rome. In addition to being a born and raised here, she is also an archeologist who is very passionate about Rome and its history, which added an extra element to our exploration!

Here are some additional articles about travel in Rome that you might enjoy! Great post on Trastevere! I love walking around Rome and trying all the local foods. One of my favorite spots to visit is the Trastevere and trying the many food venues there is amazing. Here are some of the highlights of my visit there including some wonderful food stops http://travelphotodiscovery.com/trastevere-tasting-specialty-and-local-foods/

What a beautiful place. Still can't believe I haven't visited! Thanks for sharing!

Ahhh, I can't say how much I love Rome, eventhough I haven't been yet!! I hopefully will make it this year!!! Fingers crossed, so I can use your guide(s). :)

The pictures of this article are really cool! Love the first one, with the small car. So cute!

This neighborhood is so pretty, as is your blog layout! I would love to visit Rome one day