The idea of visiting Roman Catacombs may not be your first thought when planning your Italian Vacation.

The images that come to mind when you close your eyes and think of Rome are mostly likely of the iconic monuments and historic sites scattered throughout the city: The Vatican, the Wedding Cake, and the Colosseum are good examples.

But a little closer inspection will reveal that some of the most significant sights in the city are well beneath the surface. 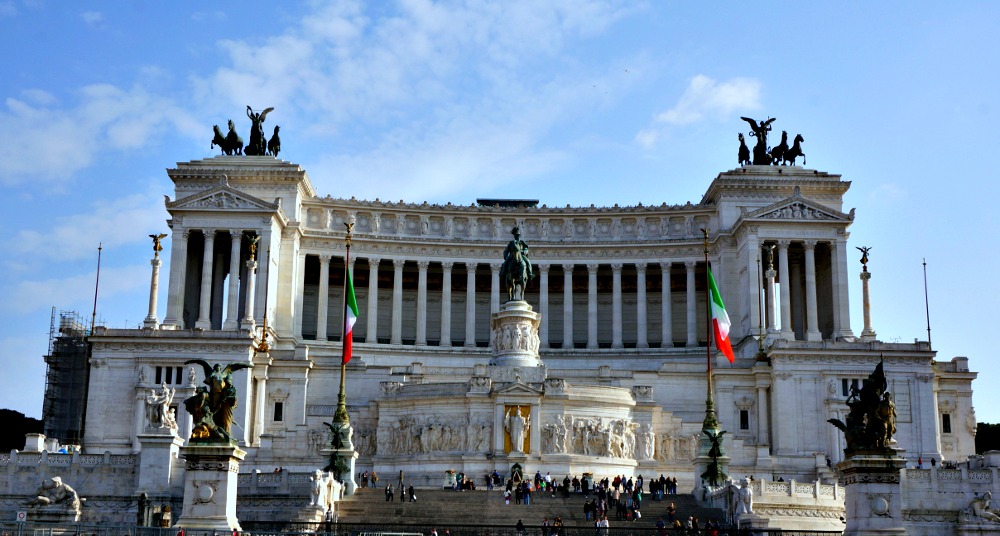 There are many reasons why this makes sense. Rome is often described as being like a lasagna, many layers built upon each other. In ancient times, Rome was the center of economic and political life in the west.

After the fall of the empire, the city was abandoned for over 1000 years. When it was again inhabited, the old buildings were destroyed, or were covered over by layers of silt from flooding.

Instead of digging out the structures, the far easier thing to do was to harvest building materials in order to build in a manner that more suited the times. You can find examples of this sort of recycling in many buildings if you look closely enough. 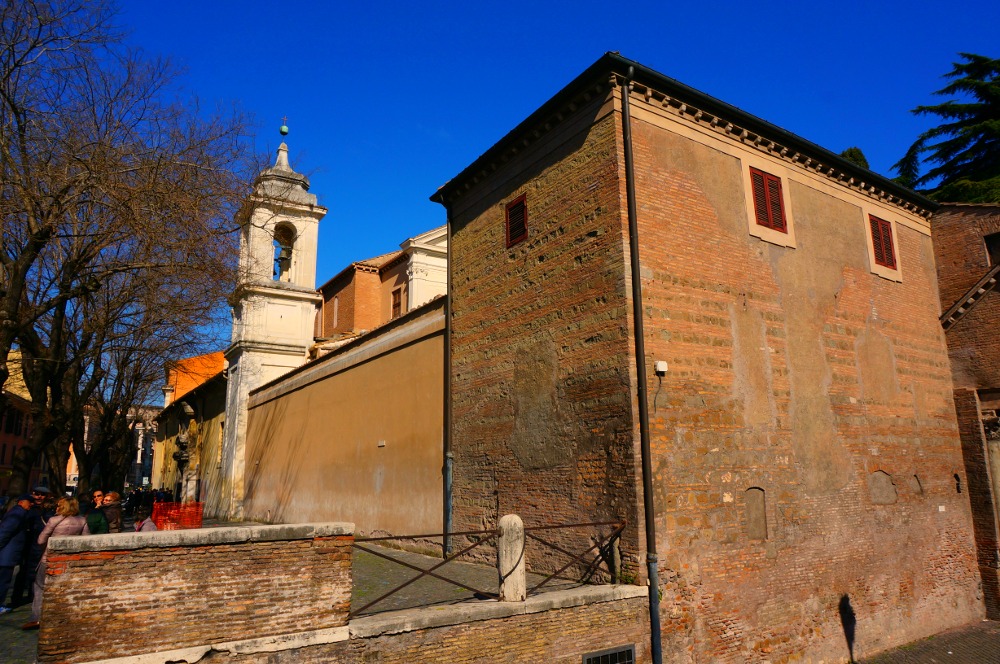 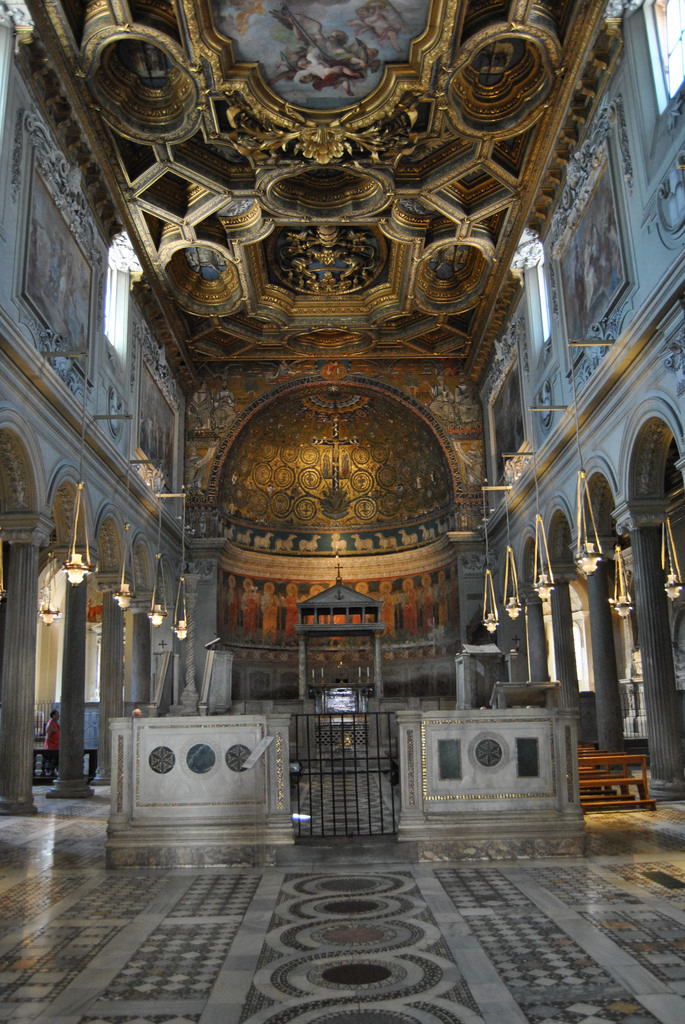 The Basilica de San Clemente is a prime example of this phenomenon. The modest exterior of the building almost hides its story 2000 years in the making that comes to life when you walk through the doors.

Without knowing what was inside, I would have wandered by bland building without giving it a second thought. And, I would have missed this astonishing view. (No photography is allowed within the Basilica, but there is an official virtual tour of the upper level of the church)

There’s more to this church, however. Below the ornate interior are three underground levels, first rediscovered during restoration efforts in the 1860’s, and now more fully excavated. Each level reveals earlier uses, from a medieval church to pre-Christian cult worshipping area, all built one upon the other.

Some of the building has been damaged by flooding over time, but still holds a wonderful glimpse at what life was like when the building below was in use. You can travel 60 feet under ground, hear the water that is still rushing below and see courtyards where clandestine rituals took place.

The official site shows a view of all of the floors. It is thought that sites such as these exist remain undiscovered, and with more archeological funding could be revealed under the streets and buildings throughout Rome.

The Roman Catacombs of Domitilla

Outside the old city walls, the catacombs tell a different story of Rome underground. Christians in the first century buried their loved ones underground in common cemeteries.

This was mainly due to the belief that those that passed would need their bodies for resurrection.

The ground outside of the city is a volcanic rock that grave diggers would need to chip away in order to create a crevice for the body that would be sealed over with a material such as brick. 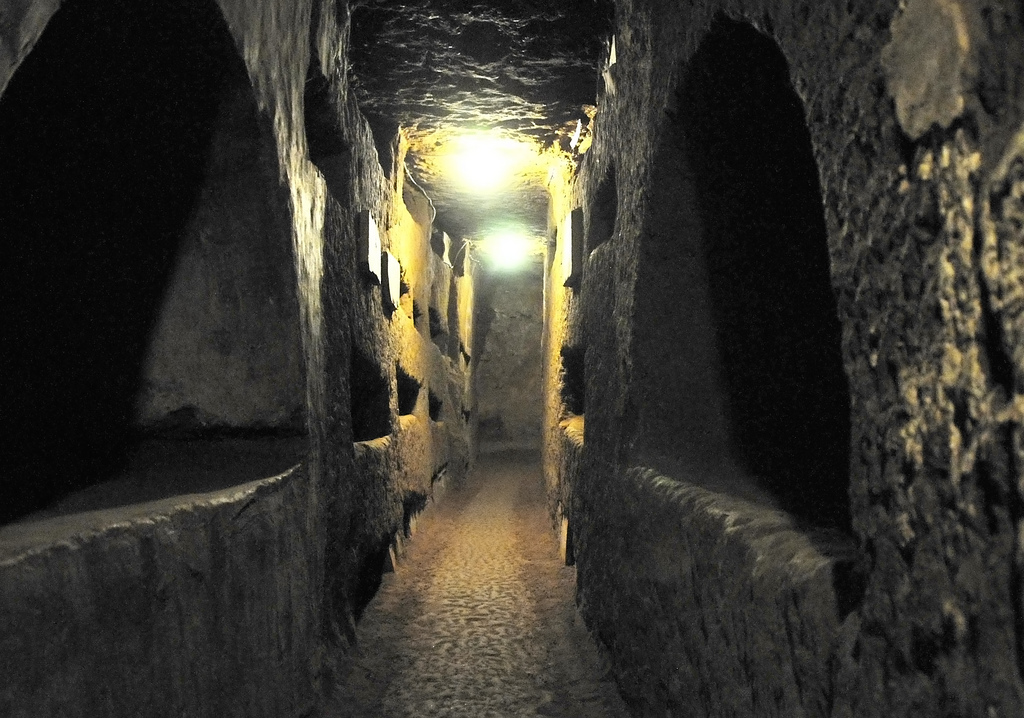 There are 61 such catacombs throughout Rome. Many were abandoned and later discovered and raided, so that much of what remains are merely the broken seal of the chamber. In some cases, the scrawled name of the looter and year he was present marking the wall.

Today it’s possible to explore the catacombs. The underground is dark, filled with layers of narrow musty passage ways.

In some places you can still find the remnants of what was an ornate painting. There are other areas carved out with a bench and spots for oil lamps for families to spend time with their loved ones.

It is hard to imagine what it must have been like to spend time in these narrow caves and the dedication the families had to each other to make the journey, faithfully and often.

Picnic areas are evident in front of an old entrance where you can imagine a social scene, both above and below ground.

We were fortunate to have an experienced guide to this site – an archaeologist who has actually spent time excavating the far regions of the Domitilla Catacombs and is assisting with a project to electronically map the site.

Here’s more information about the  Catacombs Small Group Tour and other tours and things to do in Rome to help you plan your time in the city!

Related Stories about things to do in Rome that you might enjoy: The last time I was in Rome, I went to explore the catacombs and it was fascinating. Your post really takes me back. Fantastic photos and one of my favourite experiences. Thanks for sharing

I enjoyed reading this, what a wonderful tour, and to think there's potentially so much that lies undiscovered. Shamefully I still haven't been to Italy and I've studied Roman history!? This year is the year.....thanks for the inspiration.

Now this is the first time I see Rome compared to a lasagna - very interesting ;) I'm glad you enjoyed my hometown, especially the less know spots.

I was in Rome and I never knew that there were Catacombs underneath the city! The only catacombs I visited where in Paris, and I loved them. I am going to have to check these out if I every go back to Rome.

You should also check out the Domus Aurea . Beautiful spot loaded with history! Nero, after all, burned down Rome to built this house. Little remains until today, but the scarce remains that still can be visited give an impression of how big that thing must have been!