Roman Colosseum Tour and Roman Forum Tour – in one!

Visiting the Colosseum and the Roman forum are on the top of most travelers list of must-see places when visiting Rome, Italy. And they should be.

You can’t walk through these iconic sites without feeling more connected to this ancient place.

The Colosseum is a massive structure, actually the largest amphitheater in the world, that reportedly took only 8 years to make.

The acoustics were so good that it is reported that people at the very top level were able to hear voices in a normal tone on the stage. 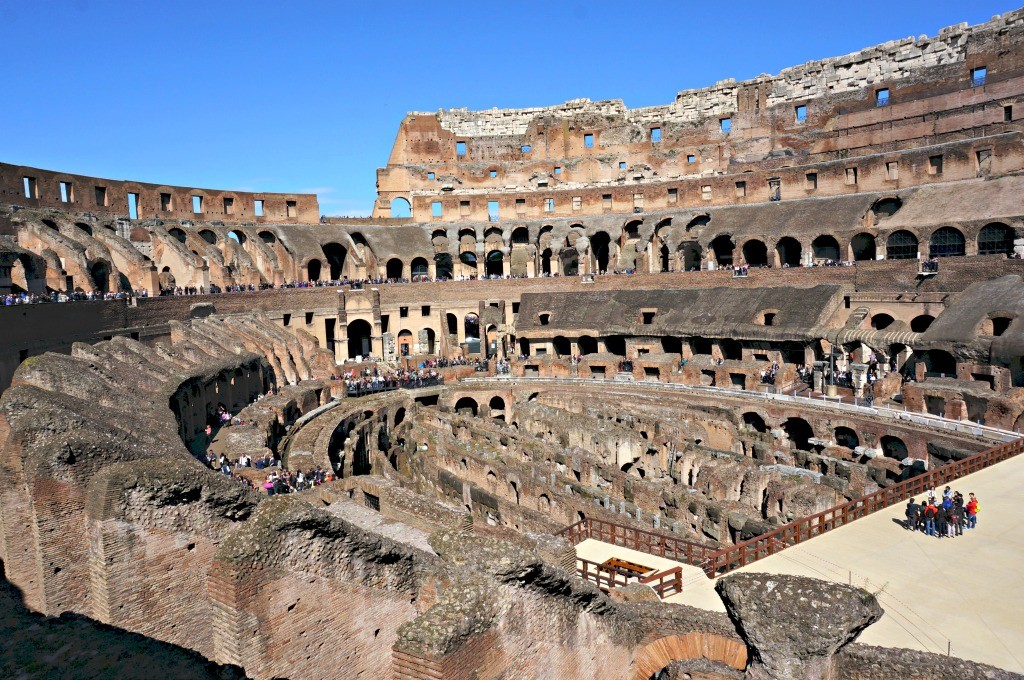 But it isn’t what’s at the top of the structure that holds the most interest. Visible at the base of the Colosseum is the beginnings of a reconstructed stage with a trap door.

Below you can see what was 2 levels (originally only one) of small windowless compartments and narrow passage ways. 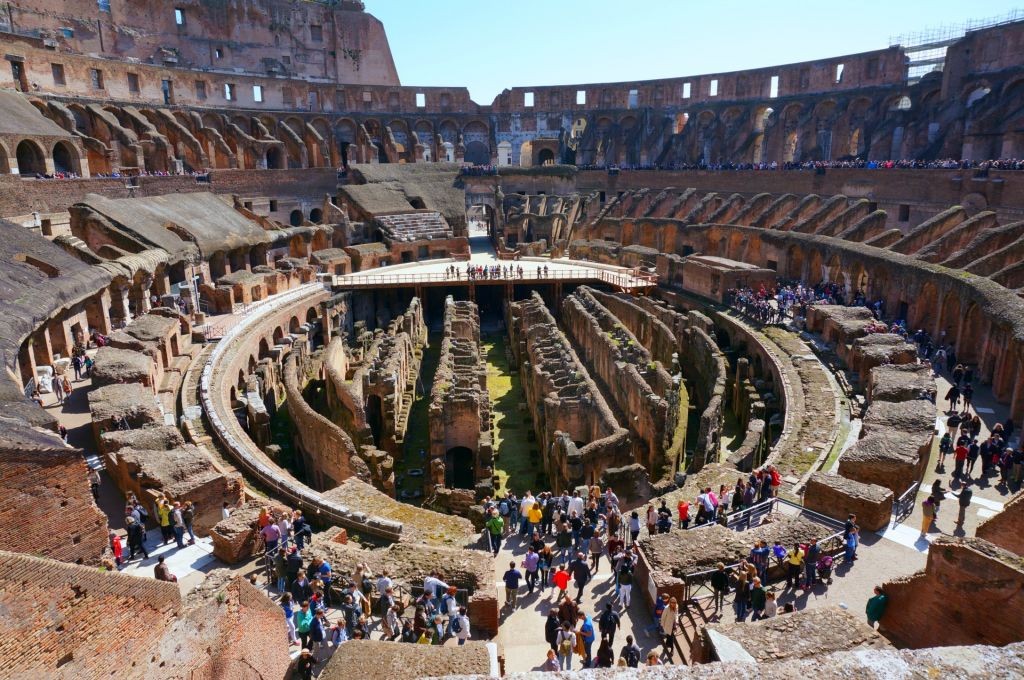 View of the Roman Colosseum floor

A Vivid History of the Roman Colosseum

Just imagine the sights and smells in this area, where hundreds of gladiators and exotic animals were held, awaiting their fate.

In Roman times, day at the Colosseum started with a what the Romans called “venatio” or hunts.

Trees and scenery were brought up through the trap doors, followed by groups of animals, or men and animals, paired against each other.

The animals were frequently exotic beasts, including bears, lions, panthers, leopards, crocodiles, elephants, and ostriches that were brought over on ships from conquered lands.

As you can imagine, very few survived the journey to be unlucky enough to make it to face their day on the Colosseum floor. 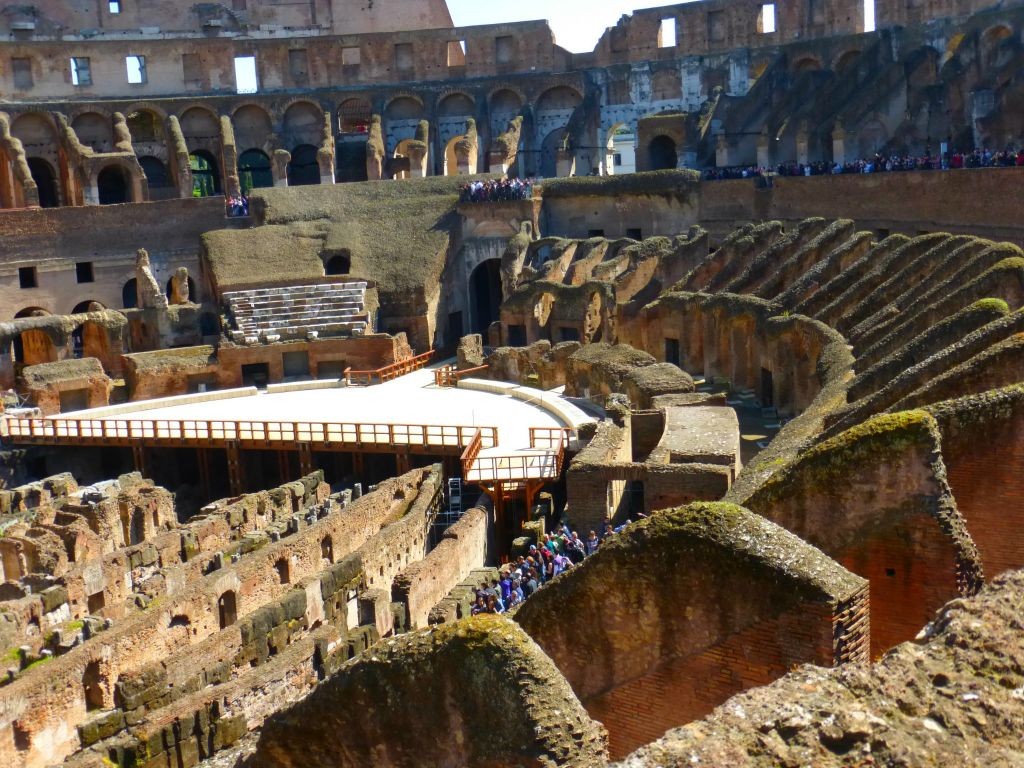 Image what it was like in the levels beneath the Colosseum

For lunch the spectators were treated to public executions. This intermission was followed by the thrill of the day, the gladiator fights.

The gladiators were mostly made up of prisoners of war who were “sponsored” by businessmen who made large amounts of money by wagers on their fighters success.

Gladiator fights continued for some 650 years and eventually both human and animal battles discontinued.

Over time the Colosseum became damaged due to fires, earthquakes, and the harvesting of metal and stone for more modern buildings.

Restoration efforts are underway but it is still astonishing to see what remains standing and to wonder what it was like to attend an event here in the height of its time. 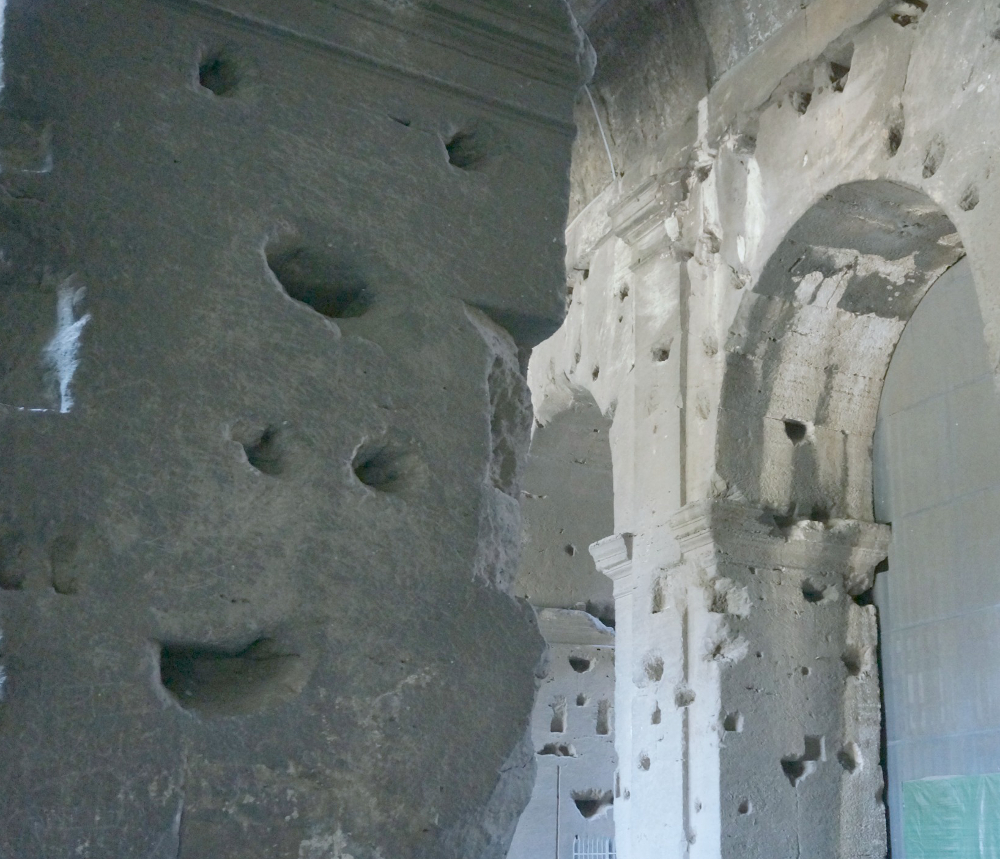 Evidence of the harvesting of metal and stone from the Colosseum

This sense of wonder travels with you as you walk the short distance to the ongoing excavation of the ancient Roman Forum.

The forum was once the central market and place of business for the people of Rome. The first building dates back to the 8th century BC.

It eventually housed the emperor of Rome and was flanked by elaborate arches that celebrated the concur of far away lands. Huge processions were made through the public square.

You can image the parades of chariots followed by soldiers, captive soldiers in exotic uniforms and strange animals being marched down the streets. 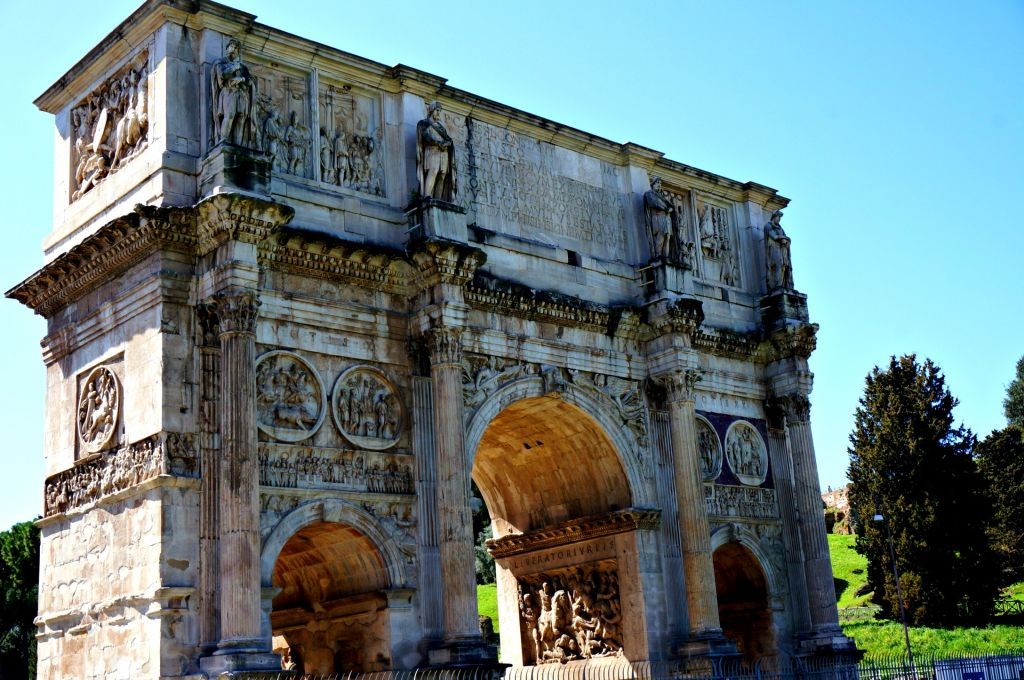 As the area aged new buildings were erected in different sections of Rome and eventually the forum was abandoned.

Unfortunately the area that the forum was built-in was swampy and subject to flooding from the Tiber River. Sediment accumulated over the centuries and many of the buildings were partially or completely buried.

In some areas new buildings were constructed over the old resulting in layers of a city built upon a city. 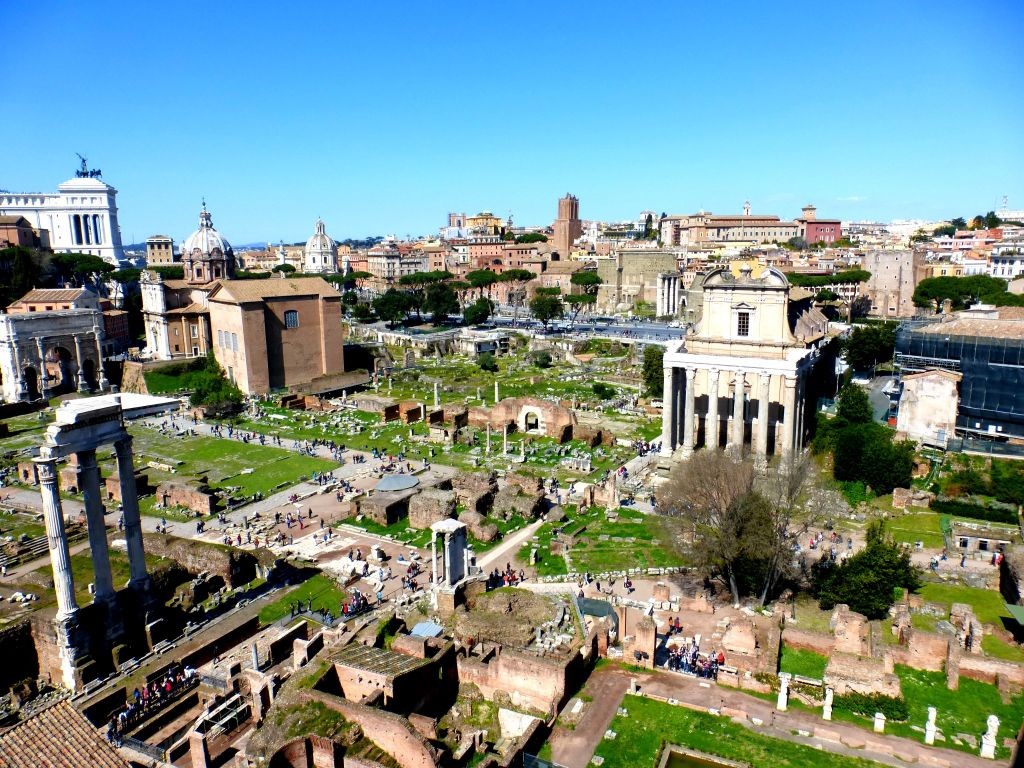 View of the Forum from above

Excavation efforts began in the 18th century and continue on today. It’s an awe-inspiring day and one where you can actually sit under the shade of a tree and take it all in – as people have been doing for centuries. 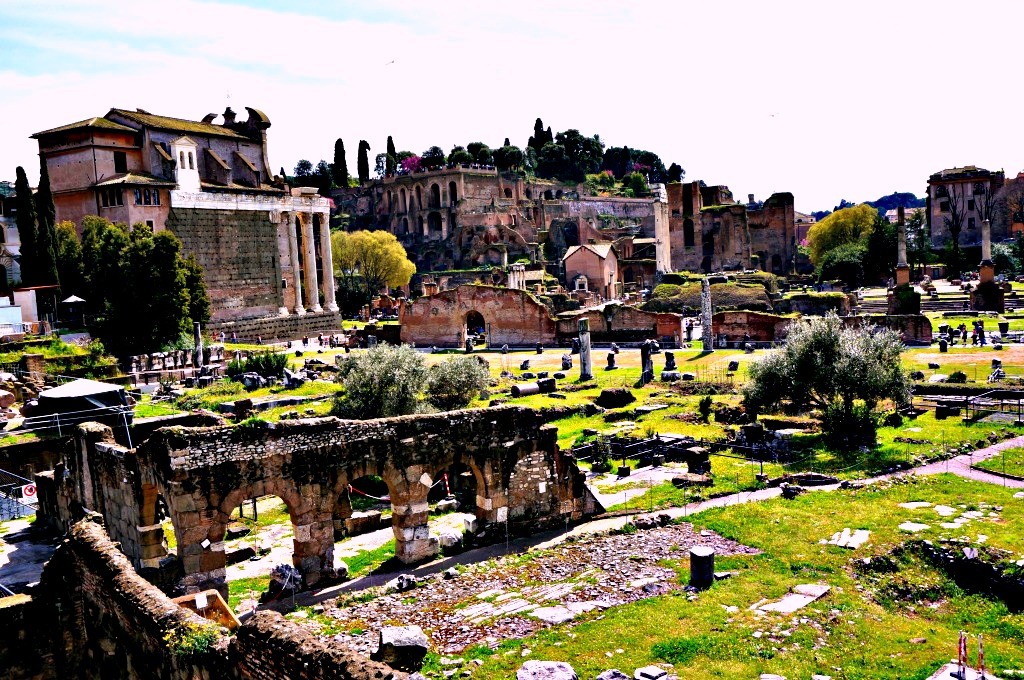 Getting the Most of Your Tours in Rome

Here’s a tip to get the most out of your visit. Go with a local guide who knows the area and can answer all of the questions that are bound to have swimming in your head.

We joined up with Small Group Tour and were guided by Mariella. She is an archeologist who fell in love while excavating the Forum and who now gives guided tours several times a week. Private tours are also available.

Here are some additional articles about things to do in Rome that you might enjoy: We were in Rome last month and did the Underground Colosseum Tour with City Wonders and it was awesome! I have been twice before but had never done a tour and I'm so glad I did this time as we saw and learned so much more.

Love this! We're currently planning a trip to Rome!

You will love it here - it's one of my favorite cities!

I loved walking around the roman forum! You took so great photos. When I went it was rainy so the pictures didn't come out that great lol

Even though I've of course done the colosseo I'll have to check this guide out! It's cool to tour with different people because everyone has a little extra imput.