One of my favorite things about traveling through South America is that you can be in the middle a bustling metropolis one minute, and about 30 minutes later finding yourself in a forest setting with few others in sight.

You get all of the comforts of a great city – ease of getting around, great food, interesting museums, and the ability to step back and relax in nature – the best of both worlds.

During our recent visit to Rio de Janeiro, Brazil, I found out that this destination has all of that, along with the kicker of some fantastic beaches. 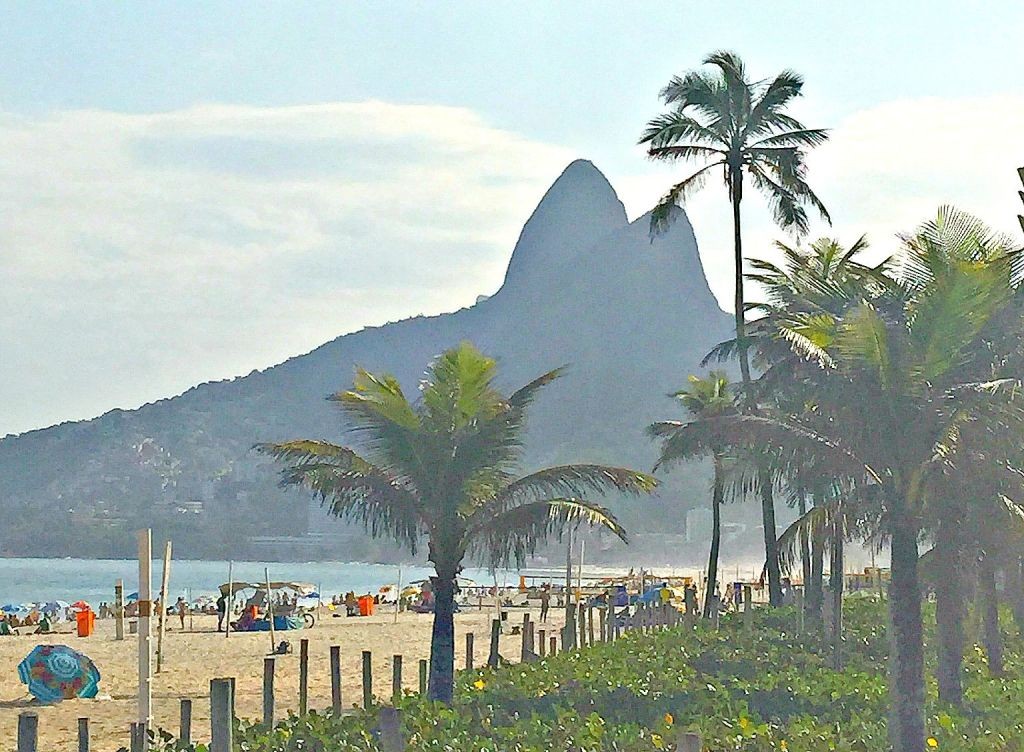 With this view, you know you are in Rio.

After enjoying some time in the city center, I was looking forward to decompressing. As a secondary benefit, a hike in Rio can offer up some incredible views of many of the things that people want to see during a visit.

If you aren’t already acquainted with Rio’s Tijuca National Park, you should consider knowing more before planning your visit. This 12.4 square mile rainforest is one of the largest urban national parks in the world.

Lots of people use the steep roads into the park for bike training, but we opted for a hike in order to gain access to some of the best views the park has to offer. 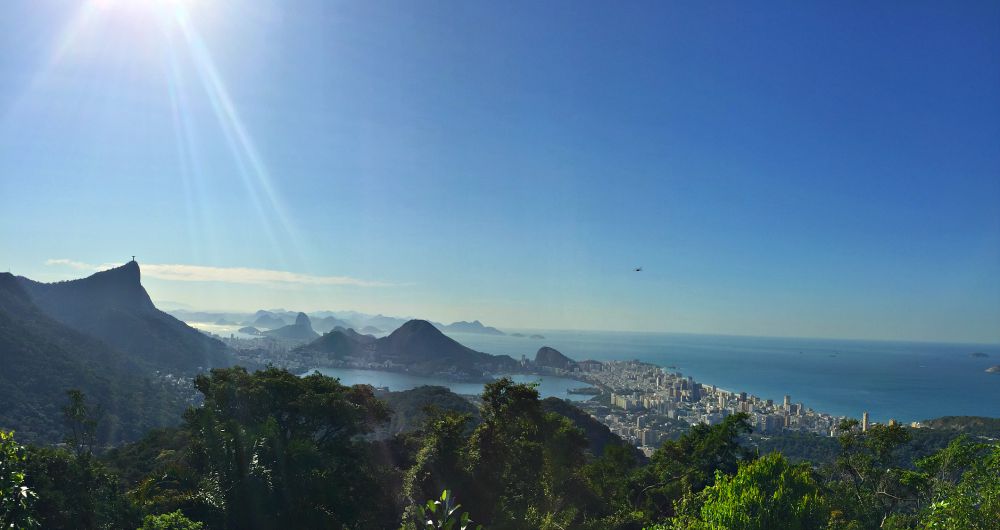 View from the Chinese Overlook in Rio de Janeiro

Not long after entering the park we stopped at the Chinese lookout, marked with a pagoda-style gazebo at the view point.

Here we were rewarded with a stunning view of the bay and Sugarloaf mountain, all being overseen by the famous Christ the Redeemer statue. This would have been enough for a great day already, but we were just getting started.

Not far up the road we stopped at the first waterfall of our hike in the park. It had been unseasonably dry before our arrival, so it was not exactly Niagara Falls, but it was a peaceful spot.

The hike we opted for was about an hour climb up to the Pico da Tijuca . This is a fairly easy hike with a gentle incline. Just as we got started we were greeted by the view of some toucans passing by overhead.

We didn’t actually see more, but we did have a fairly constant sound of toucans or other creatures chirping along as we walked. And we also ran into a few families of monkeys swinging through the trees along the way. 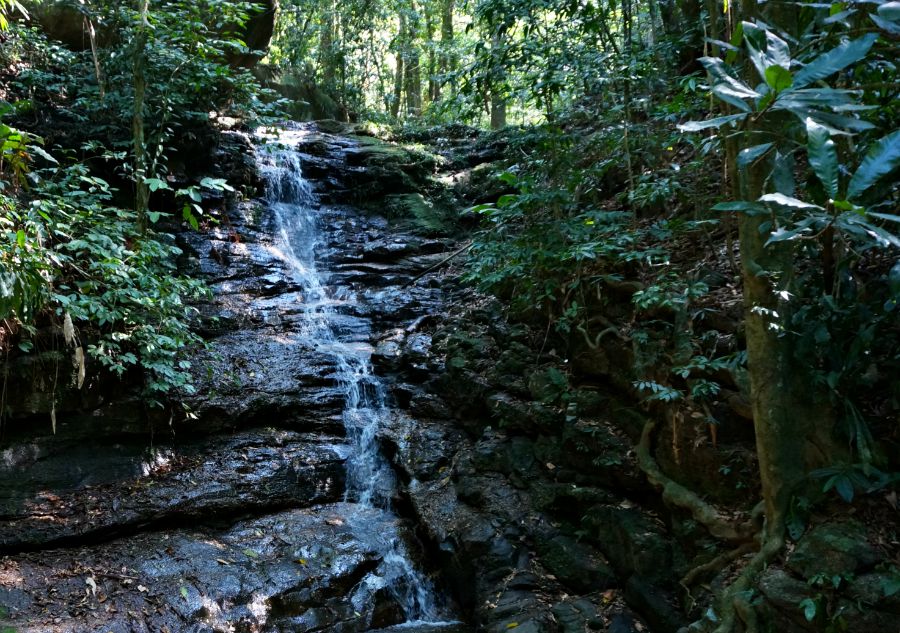 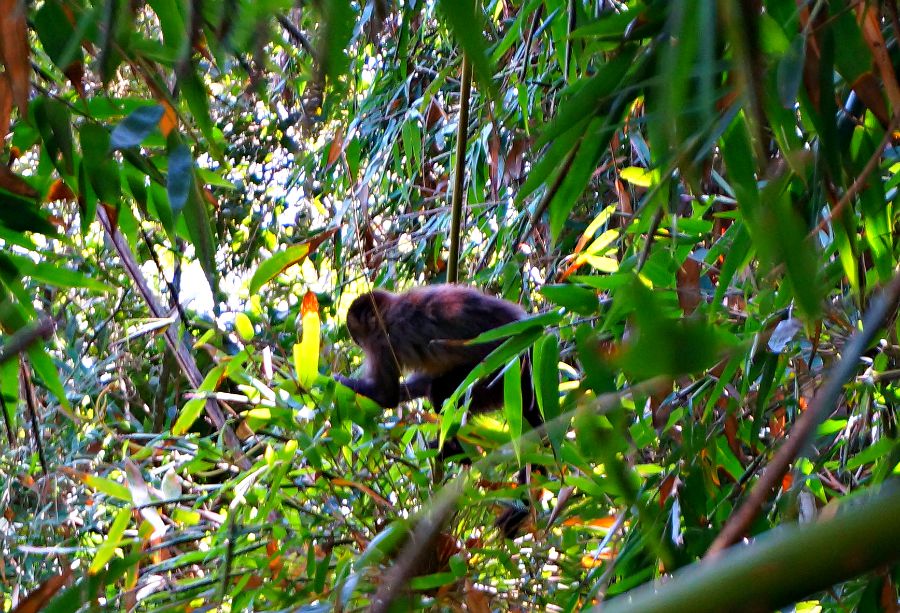 Because this was a weekday in August (winter time in Brazil), we didn’t see many other people. Winter, it turns out is the perfect time to come – little rain, moderate temperatures and fewer tourists. 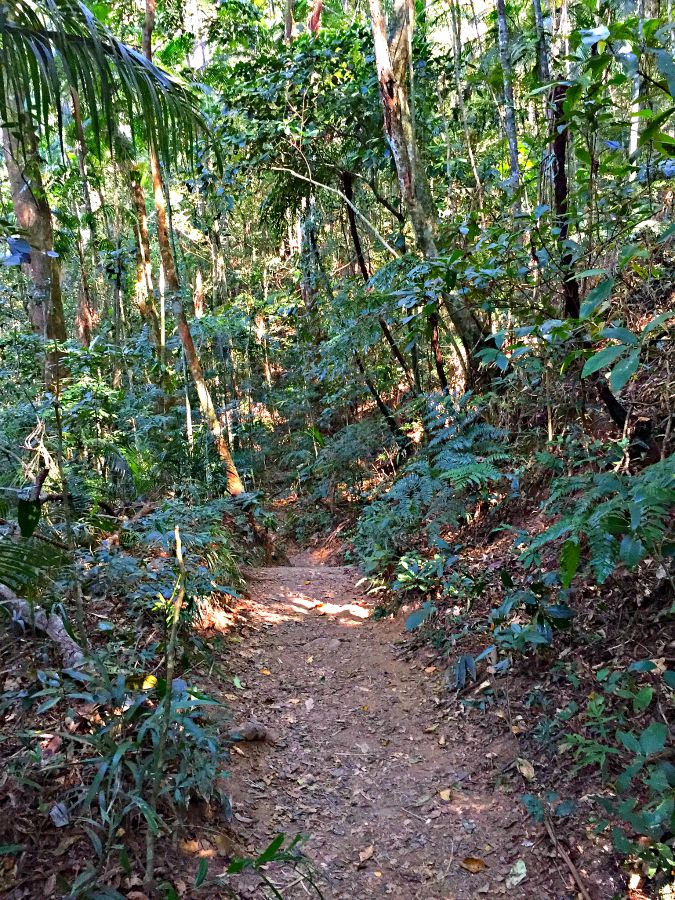 This hike was on a gentle slope over mostly easy terrain 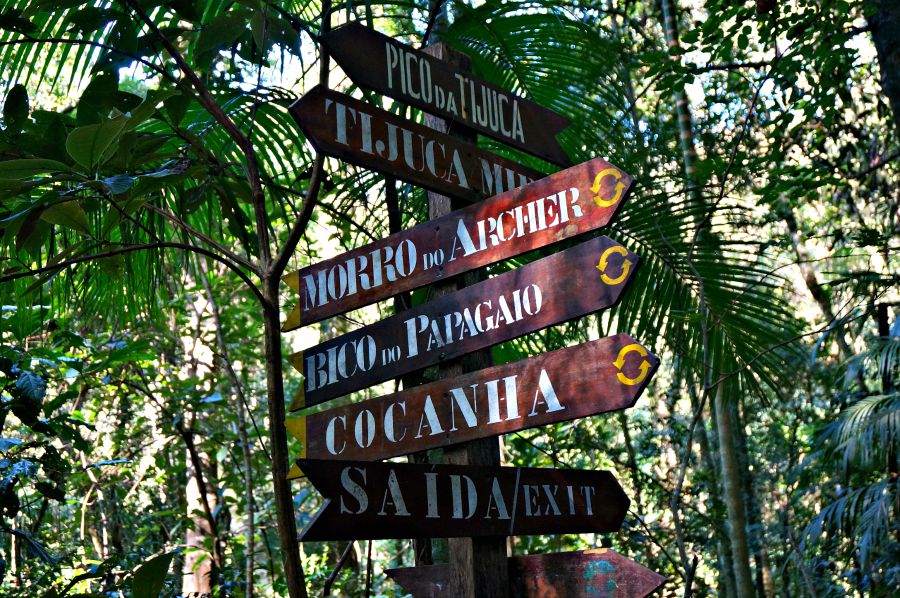 The last small section before the peak was a giant jutting rock, into which steps had been carved and a chain handrail erected in 1920 for a visit by Belgian King Albert I.

Turns out the king was a little miffed at the “retrofit” as he considered himself an avid outdoors man. I, on the other hand, was just as happy to have their added assistance. 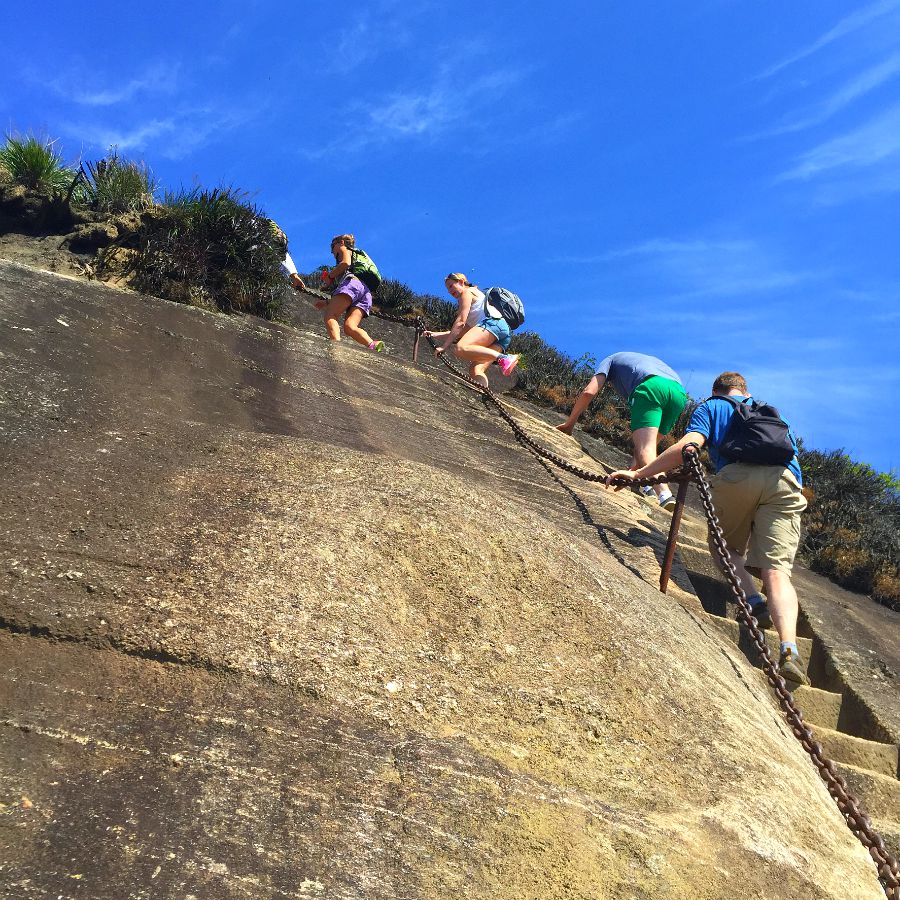 At the top, we were awarded with these views: 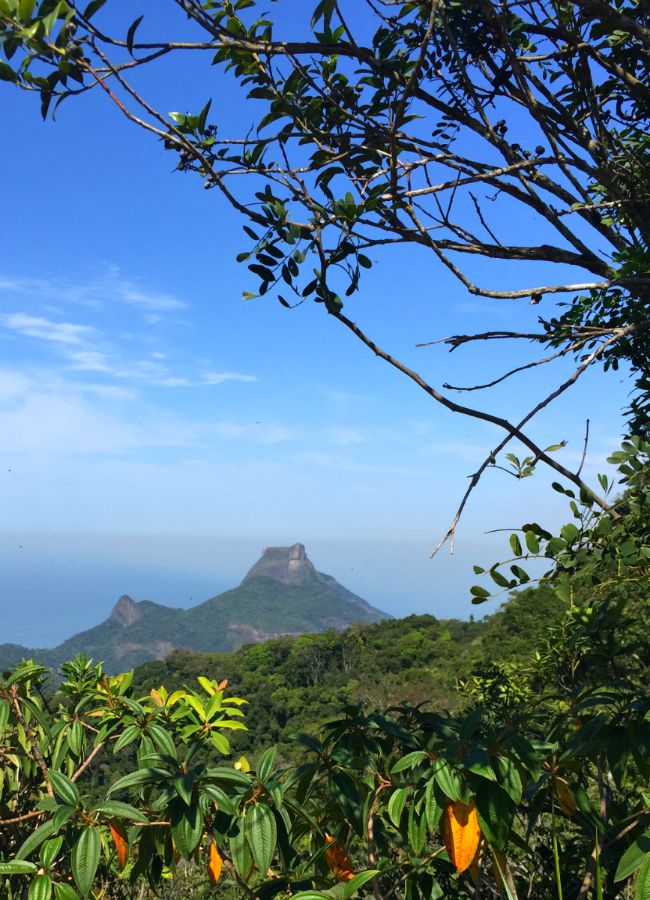 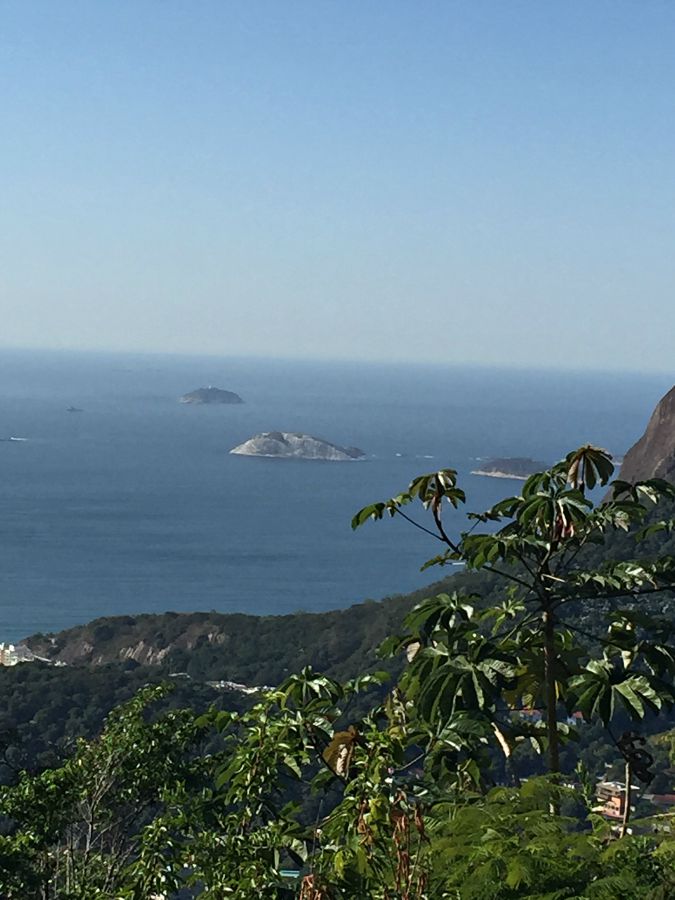 After making it down the mountain we made one last stop at a grotto/waterfall. Here you can picnic, hike and wade in the water. Nice treat for tired feet.

We only covered a small area of the park during our one day visit. There are several other hikes in the area and other activities such as technical rock climbing for the more adventurous.

Soon it was time to take the short 30 minute drive back to hunt down some lunch and relax on the beach. You see what I mean – the best of both worlds. 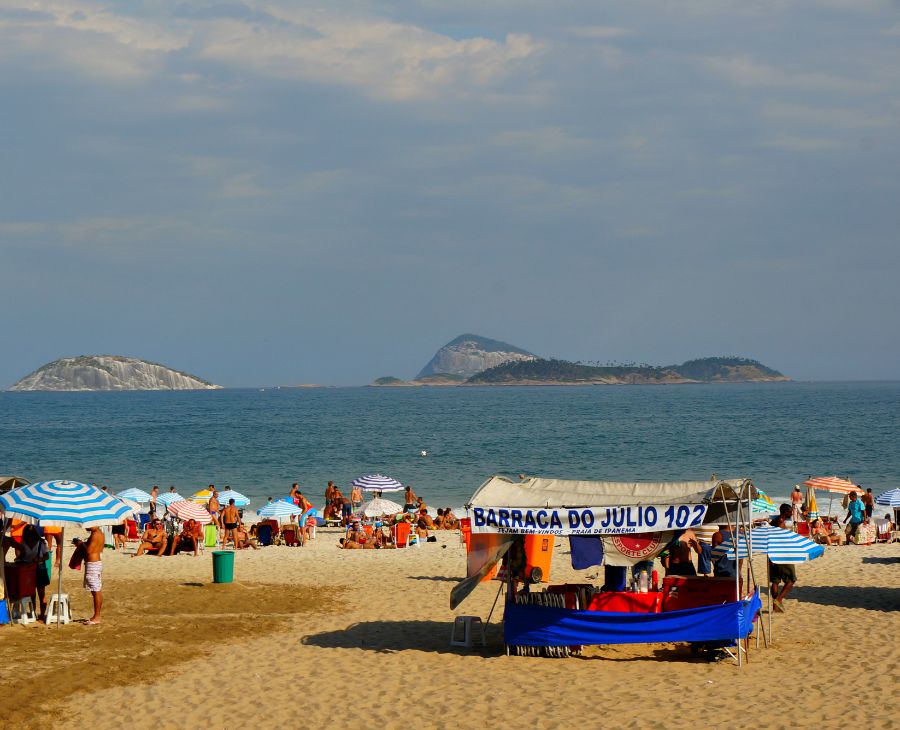 Barraca Do Julio has your beach chair waiting

A special thank you to Rio Natural Ecotourism for guiding us on this hike. As always, our opinions are our own.

Related articles about the sights and flavors of Rio de Janeiro:

Inspired? Pin this article for later: 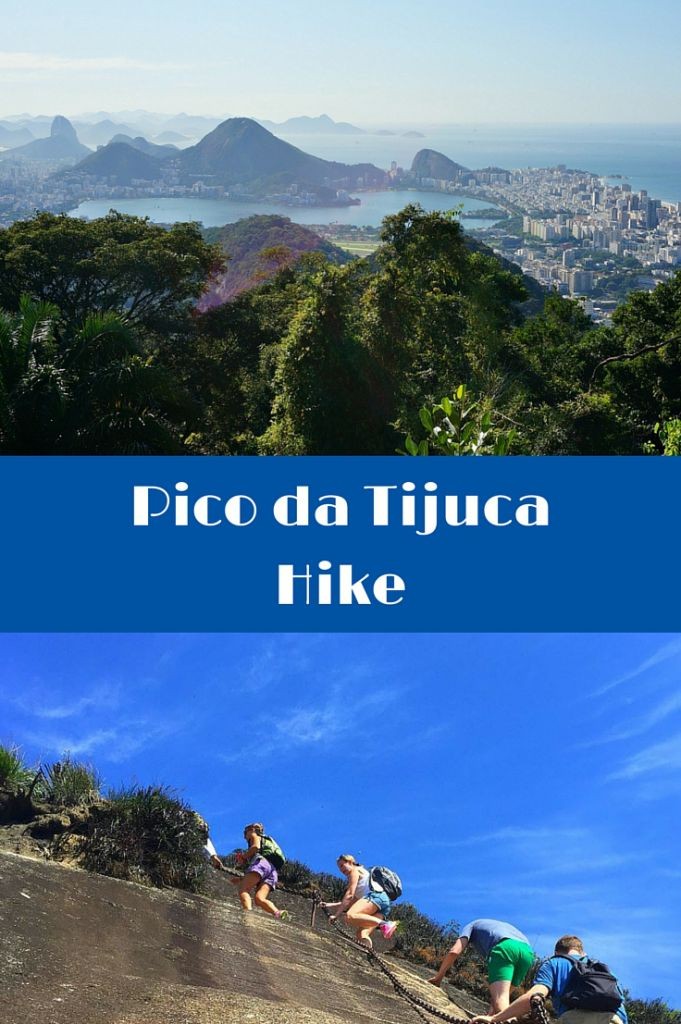 Tijuca Forest offers a contrast between the 'Stone Jungle' and tropical forest, right in the middle of a city. An oasis of green and fresh air with centers of species (among mammals, birds and reptiles) living together in this humid scenery that nowadays is a Human Patrimony. The area has already been a coffee farm and in 1967 was transformed in a National Park.

Rio sounds AMAZING! We were recently in South America though sadly didn't make it to Brazil - really want to head back for the rainforest in Rio. We love hiking so Tijuca National Park is going to be #1 on the itinerary, and laying back on the beach after a long and amazing hike sounds like the perfect travel plan.

So glad you enjoyed your trip - thanks for the inspiration for my own!

Hi Guys!! So happy to know that you enjoyed Rio de Janeiro, especially the nature. IÂ´m a proud Brazilian, and it's always good to here that people had a good experience there. But I have to tell the truth, Rio de Janeiro is just a small part of the beauty that you can find in Brazil. If you have spare time in my country go south. There is a state called Santa Catarina, that is on of the most beautiful places in the country. Beaches, mountains, forests, crystal clear water and not so huge cities... Amazing! Search for FlorianÃ³polis, one of my favorite places in the world! All the best, Nat

Wow! I've been a few times to Rio - and that hike is definitely on my to do list for my next visit now! Your photos are so amazing!

Love your angle on those rock stairs and the view of the beach. Must have been a great reward for a great hiking day.