In this Puerto Vallarta cooking class, we learned how to take ten simple ingredients, and turn them into one of the best Mexican meals we have ever had. Although, admittedly, making that bit of culinary magic happen required a few special things.

The class turned out to be one of our favorite things to do in Puerto Vallarta – and there are quite a few from which to choose!

First, we needed knowledge about where to find the freshest local ingredients. Next needed to put ourselves in the practiced hands of a trained chef.

Someone with generations of experience and passion about Mexican cuisine. Luckily for us, we found one of Puerto Vallarta’s favorite sons, Chef Julio Cesar Castillón Pérez. 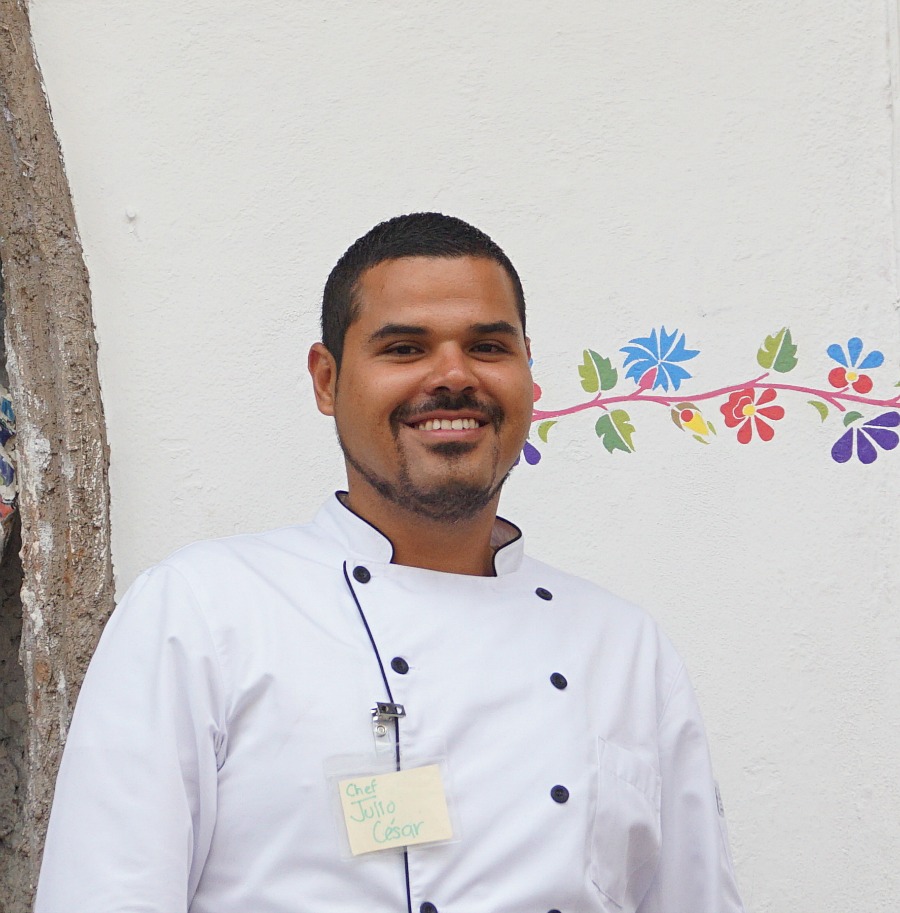 One of Puerto Vallarta’s favorite sons, and our teacher for the day, Chef Julio Cesar

A Mexican Cooking Lesson with a Heart and a History

We began our Puerto Vallarta Cooking Class with an introduction to Chef Julio Cesar and his mother Gaby. She is the namesake for one of Puerto Vallarta’s most successful restaurants, Gaby’s Restaurant, which began as a simple cart serving breakfast foods to locals.

The humble business blossomed into a bustling family business set in the middle of Puerto Vallarta’s Old Town.

Cooking in this place, with the iconic church steeple in the background, was a constant reminder of how far the family had come in the span of a single generation. 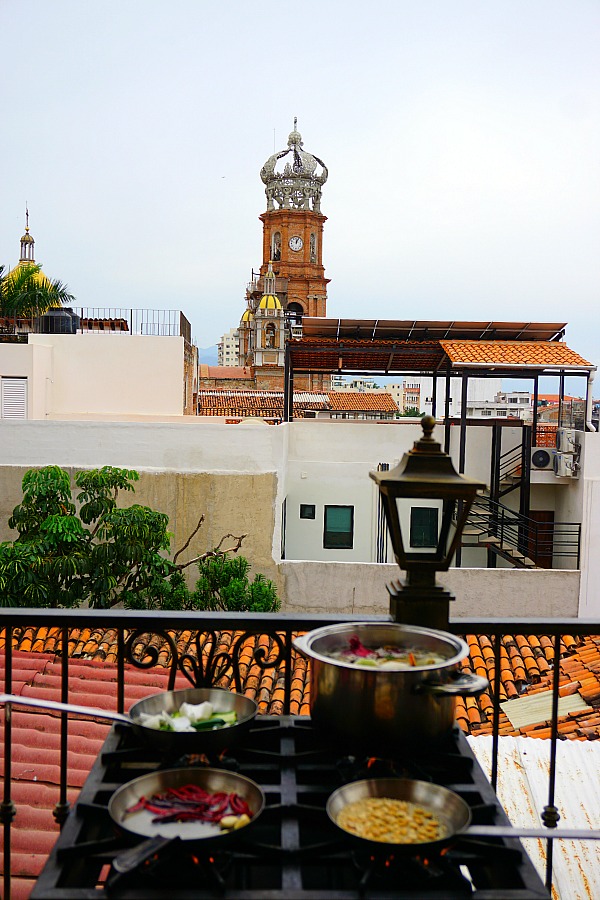 Before cooking, we were treated to a walk though Puerto Vallarta’s city center. We met local street vendors selling homemade candy, and Julio pointed out new areas around town that have cropped up.

One of these is neighborhood Gringo Gulch, which is now the home of many expats (hence the name). Also in this area is the famous Casa Kimberly, a high-end hotel that was once the home of Richard Burton and Elizabeth Taylor.

Julio guided us to small markets where fresh local produce, fish, meat, cheese and tortilla vendors offered up simple ingredients that were to become the basis for our feast.

He purchased cheese and tortillas that were made that day, and fish that was pulled from the ocean the morning of our visit. 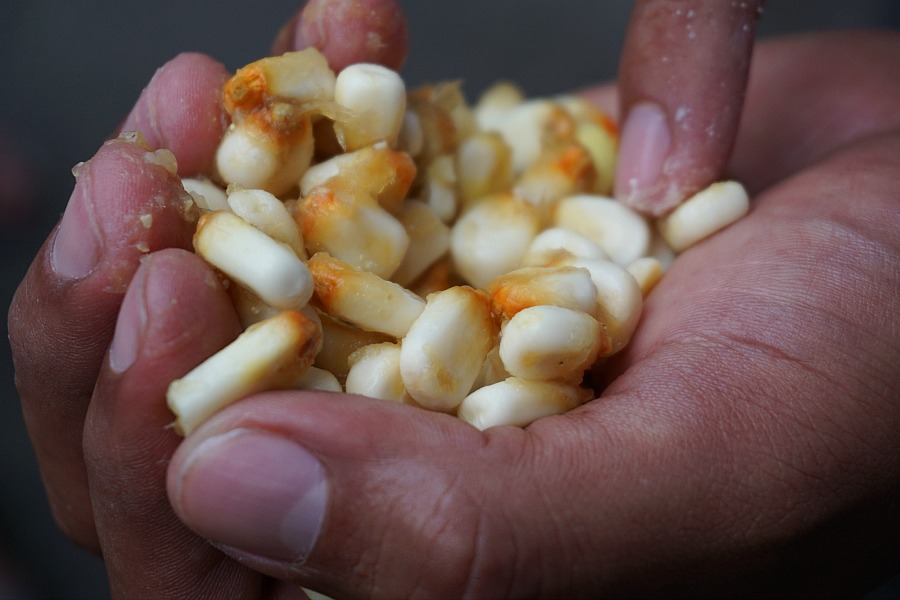 We stopped outside a small factory, where we were able to watch the automatic tortilla machine cranking out fresh corn tortillas.

As a small sample of what was in store for us, Julio made each of us a snack from a warm tortilla slathered with bean puree and topped with a slice of fresh cheese and salsa verde. 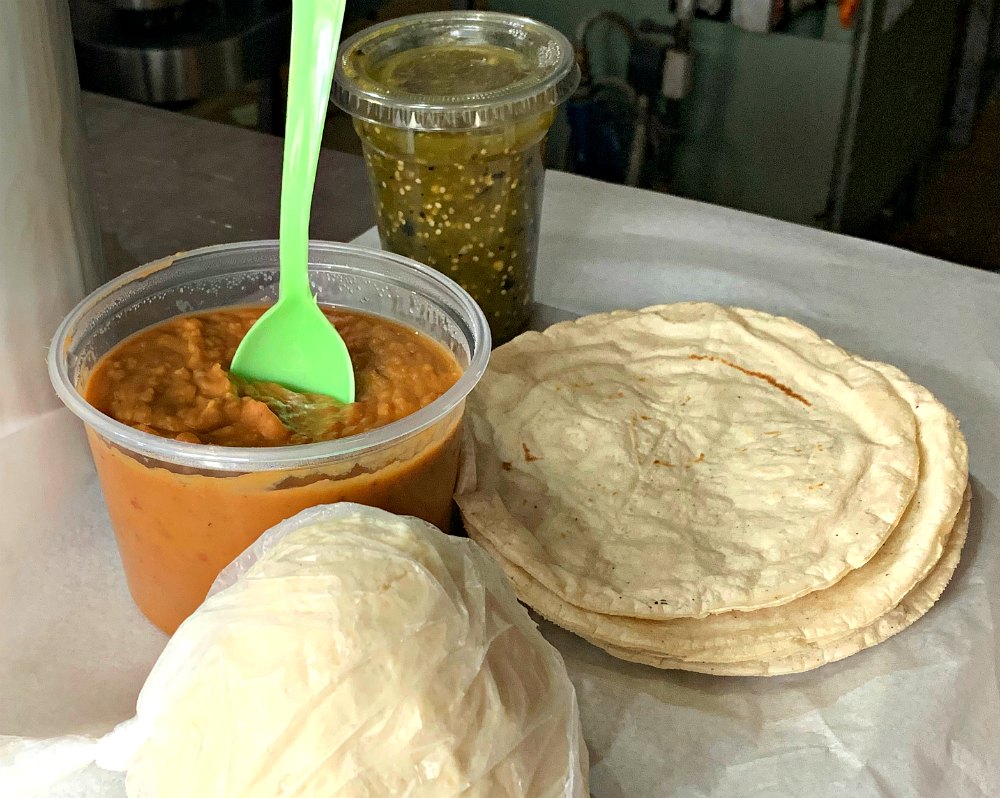 We shuffled back to the restaurant with our shopping bags filled with the items Julio had selected. Once there he laid out our treasures, which consisted of dried and fresh chili peppers, onions, garlic, avocados, pineapple, tomatoes, limes, a carrot, one cucumber and a large bunch of cilantro.

This along with locally caught fish (parrot fish) and some chicken were to become our gourmet lunch.

We started in by making salsa. That, actually, is a huge understatement. We made many, many salsas.

Julio Cesar coaxed out the flavors of the ingredients by roasting some, adding lime juice and pineapple to others, and combining them together to make a unique flavor for each one. 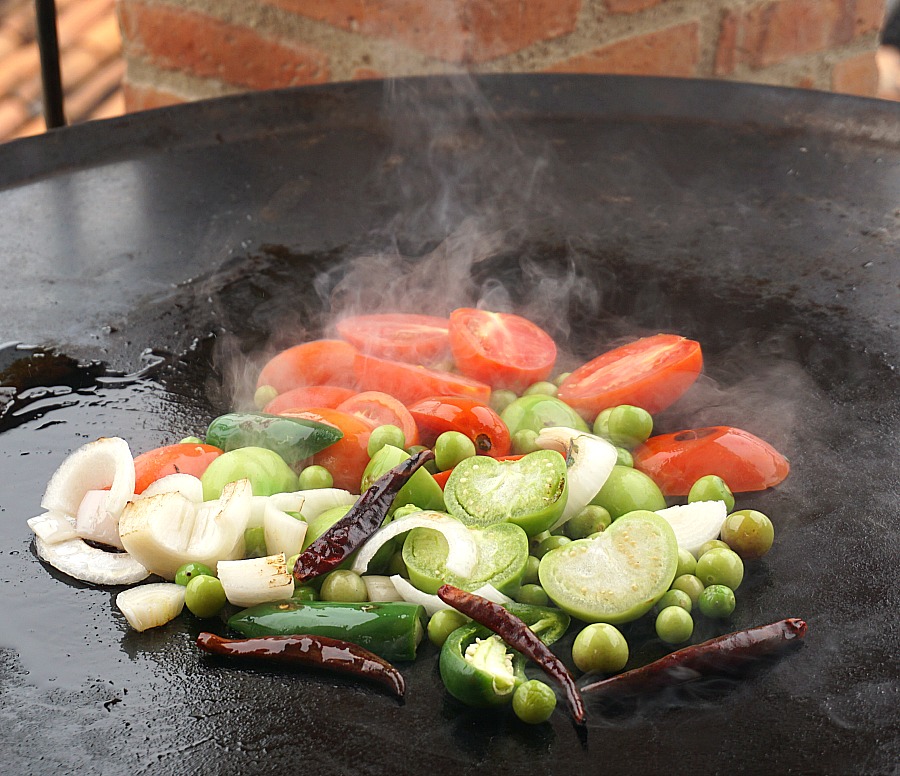 We ground all the ingredients in molcajetes, which are traditional mortar and pestles made from volcanic rock. Essentially, these are old-school food processors.

The rough texture of the rock allowed us to grind and mix the ingredients, and the molcajete itself adds flavor from the minerals in stone. 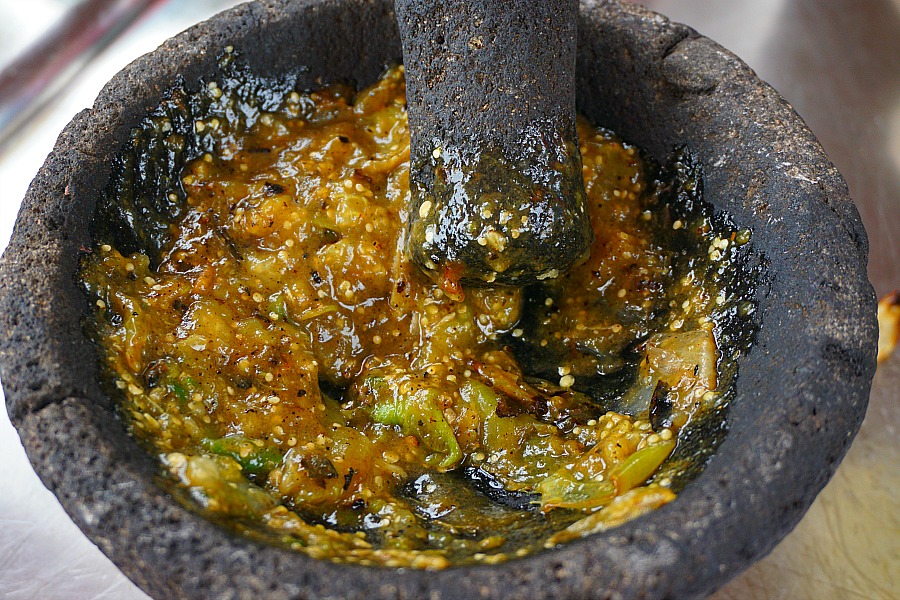 Green and Red Salsa in a Molcajete 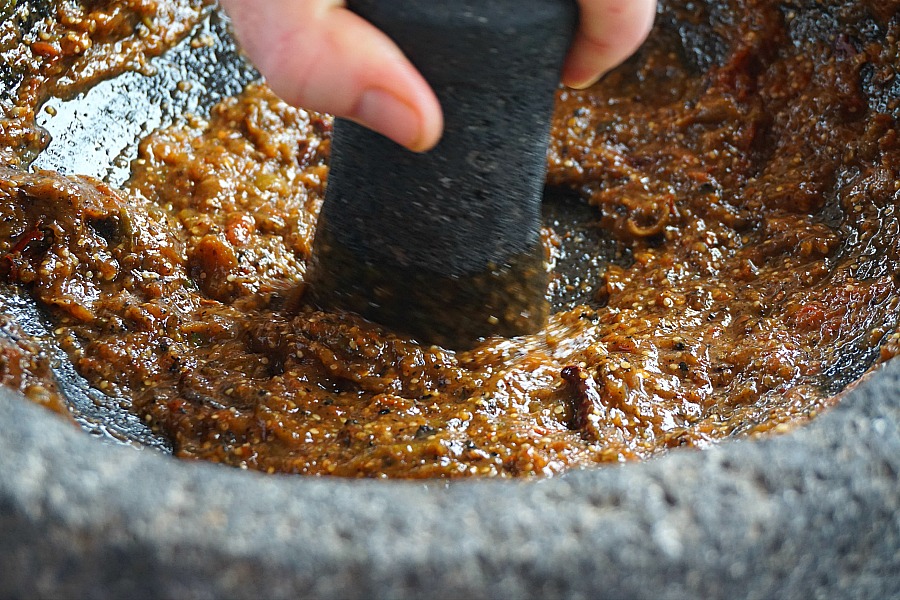 I was already starting to get a little full after sampling each molcajete salsa. Admittedly, I did go back for a second taste to determine which was my favorite – an exercise that proved futile. Maybe I was also getting a little full from enjoying the passion fruit margarita that had arrived to join the party.

Our next task was to make two refreshing but very different ceviches. The first was Puerto Vallarta style, with marinated fish mixed with cucumber, carrot, and tomato. The second was a Caribbean style, combining the fish with more tropical ingredients like pineapple and coconut.

The flavors were unique, and while we were told that the dishes were local recipes, I suggest that Julio Cesar and his family traditions had a lot to do with the final preparation. 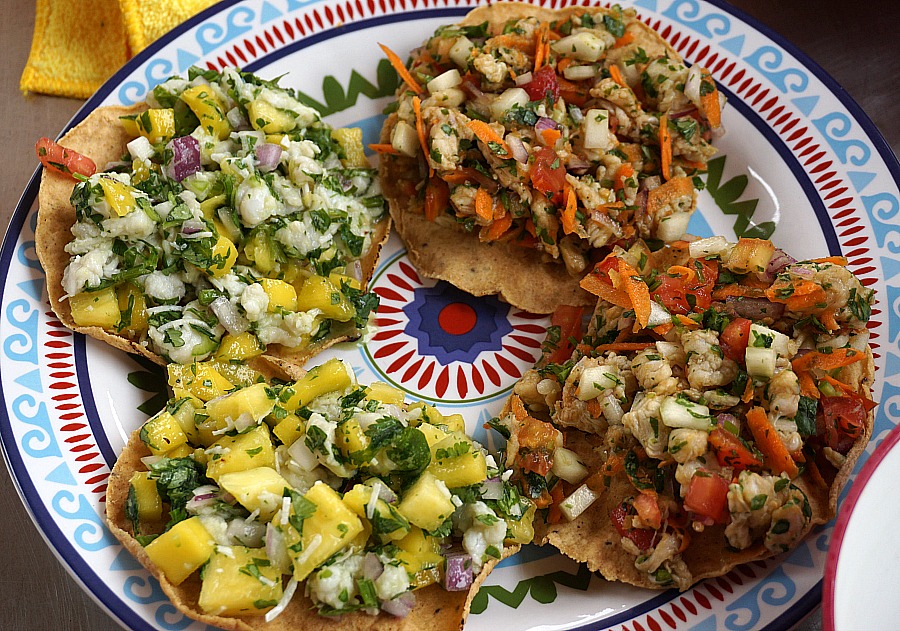 While digging into the ceviche we were introduced to another cocktail popular in Puerto Vallarta, the Mexican Bandera. 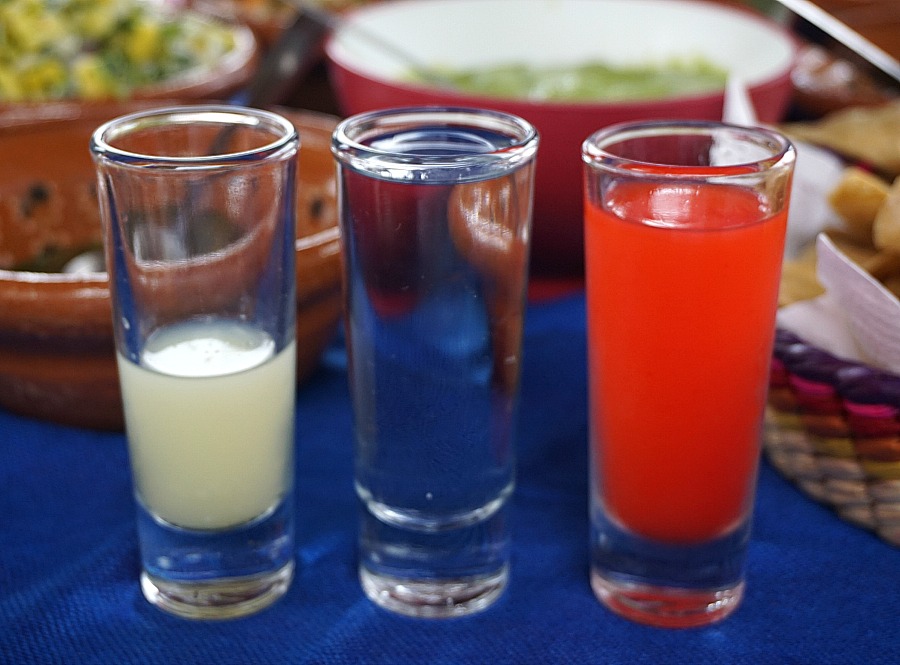 This drink is actually made up of three shot glasses with different liquids – each with a color reminiscent of colors in the Mexican flag (“bandera” is flag in Spanish).

They are sipped in a very specific order. First the tart lime juice to open the palate. Next the white tequila to set it on fire. And finally, the sweet and spicy sangrita (a grenadine-based mixture), to douse the flames. Viva Mexico!

Next, we turned our attention to another classic dish, Chile Relleno. We roasted poblano peppers over an open flame, stuffed them with local cheese, covered them in a light batter and fried them.

The chilies were then covered with a simple ranchero sauce and sour cream. We ate them along with fresh tortillas that we had made ourselves. 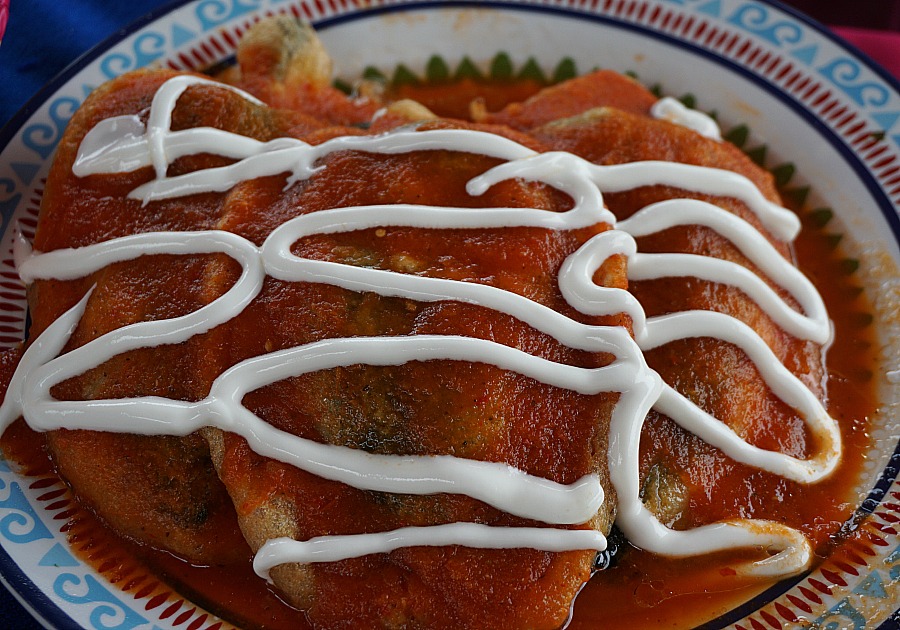 You would think that the cooking class was over at that point. After six salsas, two ceviches, a main dish, a margarita, and some sipping tequila, as that was more than enough. But we weren’t done yet, not by a long shot. 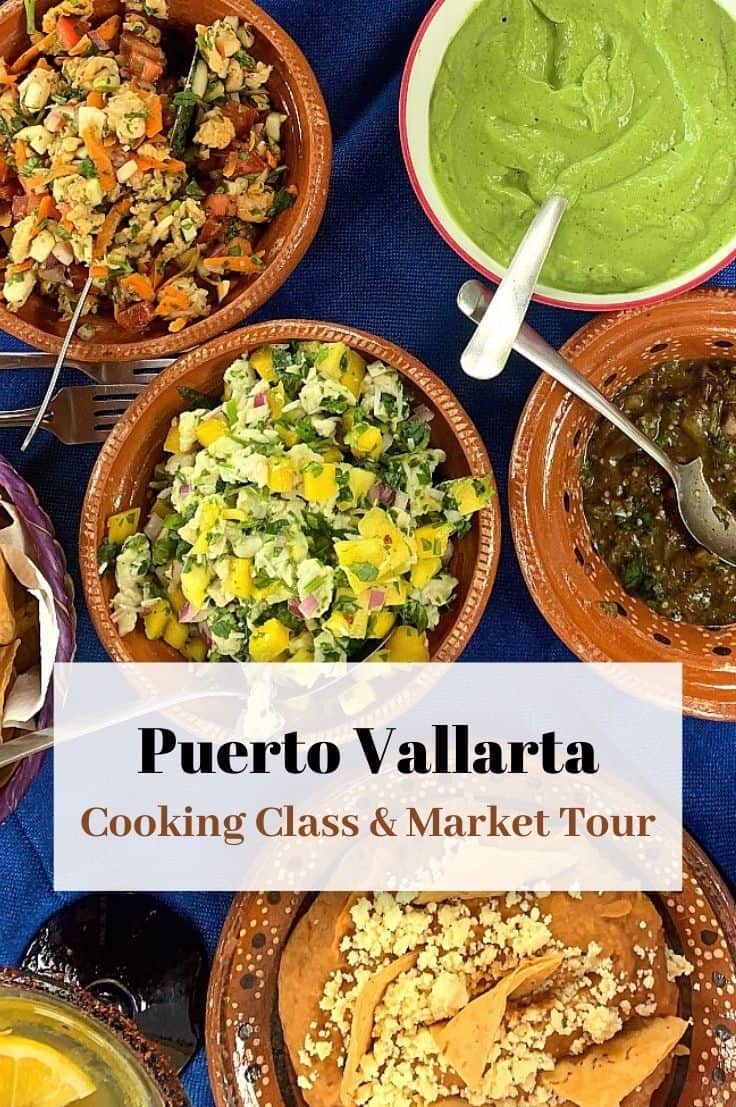 The next dish was the most surprising. Julio made a classic mole sauce with his own twists.

Mole sauces are complex. They are typically made with roasted peppers, spices such as cumin and sometimes cinnamon, paired with charred garlic and onion, and often combined with savory chocolate.

These ingredients were combined together the liquid in which we had poached the chicken, and blended until smooth. The rich thick sauce was then poured over the cooked chicken and served with a sprinkle of sesame seeds.

We never could have imagined coming up with that combination of ingredients, but they all worked together beautifully. 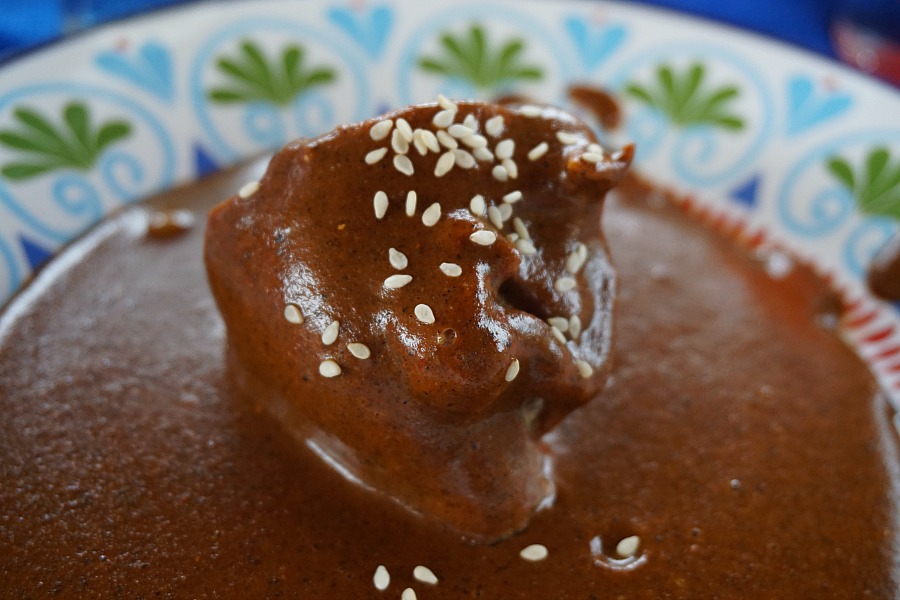 Enjoying the chicken mole in the backdrop of old Puerto Vallarta while hearing Julio’s stories of how the area had evolved over the years was a truly special experience.

No multi-course dinner is complete without a dessert and after-dinner drink. And of course, we had both. Dessert was a new one for us.

We combined eggs, condensed milk and masa (the corn-based dough from which tortillas are made) into a sweet, corn-flavored pudding. 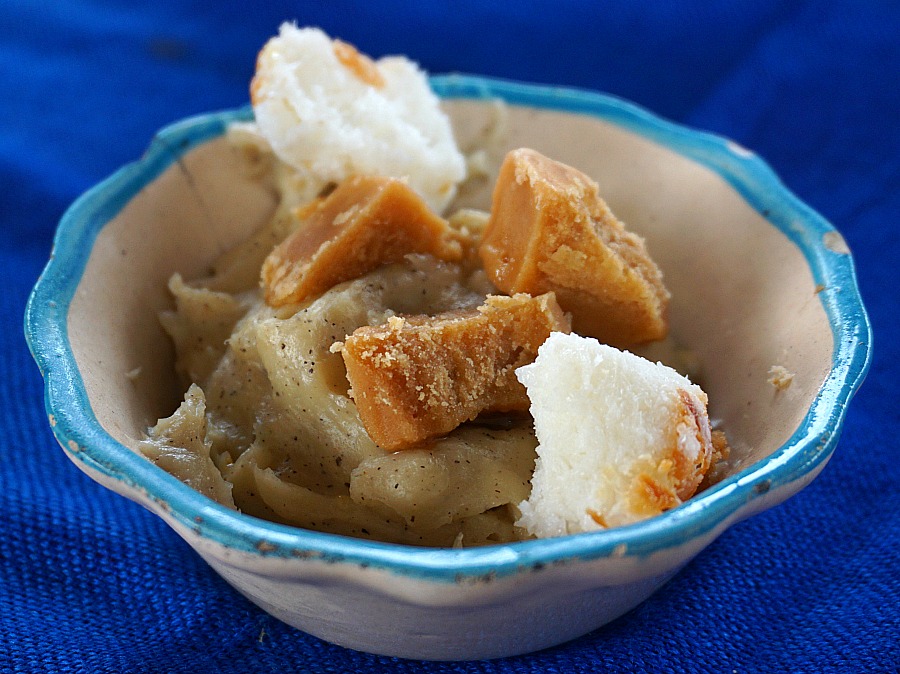 Our final drink was a sample of raicilla – a traditional drink in Jalisco, which Julio joked was “Mexican Moonshine”. In reality, this is a smokey liquor made from roasted agave, similar to Mezcal.

While it is traditionally made as a homemade liquor, it’s been gaining popularity as a tequila and mezcal alternative, and can be found bottled in many stores. The vintage we tried was made by Julio’s own family. 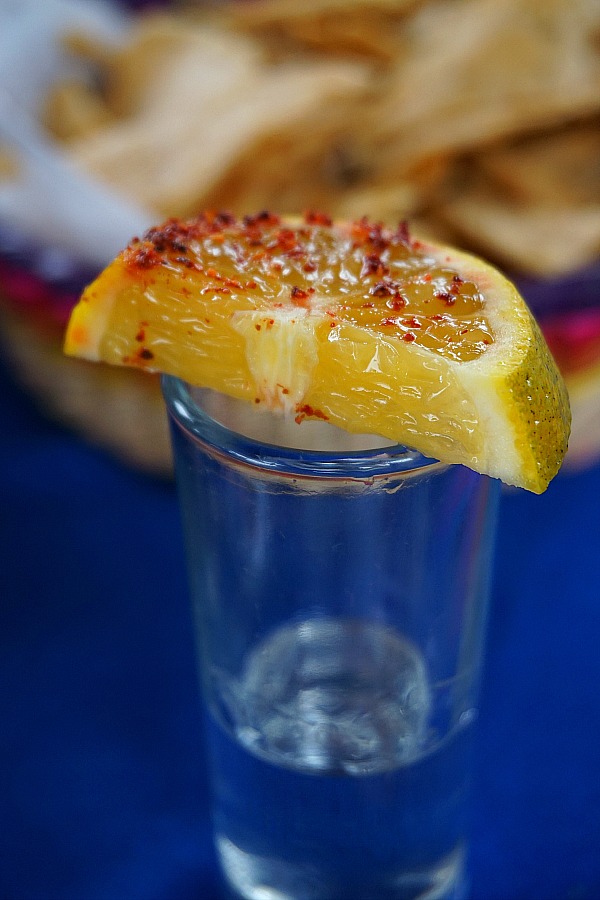 Raicilla with Limon and Chile Pepper

We wandered away from the restaurant toward the boardwalk (malecon) which was a mere two blocks away. Despite how full we were, we left excited to try some of the other restaurants Julio had suggested, along with some other activities Puerto Vallarta had to offer.

It was the prefect beginning to our visit, made all the better by the little packet of recipes we were given as we left the class. Look out friends and family, you are in for a treat when we get back!

If you are planning a trip to Puerto Vallarta, check out our post about things to do, including finding some of the best Puerto Vallarta beaches and beach clubs.

Here are some related posts about cooking classes and food tours around the world: 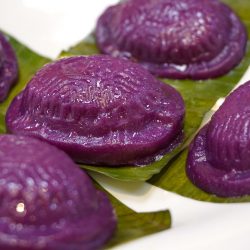 Wonderful! It isn't our class, this is an article about our experience taking the cooking class at Gaby's Restaurant. We have a link to their website in the post. Contact them to sign up. It's really fun - I'm sure you will have a fantastic time.