One of our favorite things to do when exploring a new city is finding street art. The art can range from the whimsical to the political or angry – in any case, it tells a part of the story of a new destination.

One reason that we decided to spend some time in Georgetown on the Island of Penang in Malaysia was specifically to see the famed Penang street art – known for being colorful, playful, and in some cases, interactive. 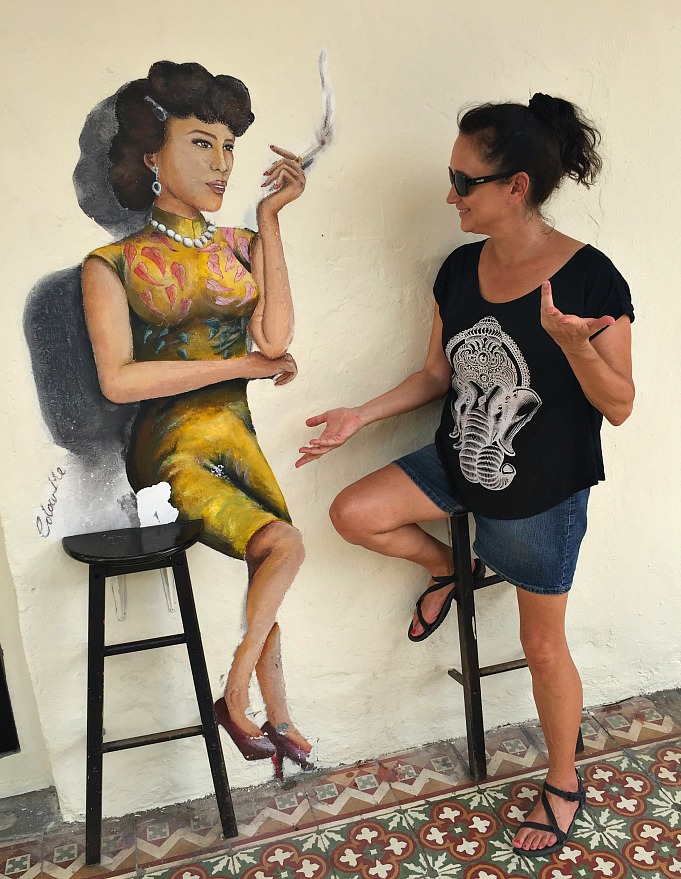 The best known street art in Penang are works by Lithuanian born artist Ernest Zacharevic who created the murals for the George Town Culture festival in in 2012.

The street art depicts images of everyday life in Malaysia and many incorporate real physical objects such as a bicycle, a swing or a motorcycle.

At first glance, the physical items seem just like a 3D painted image. Viewers of the art are invited to become a part of the scene – and how can you possibly resist? 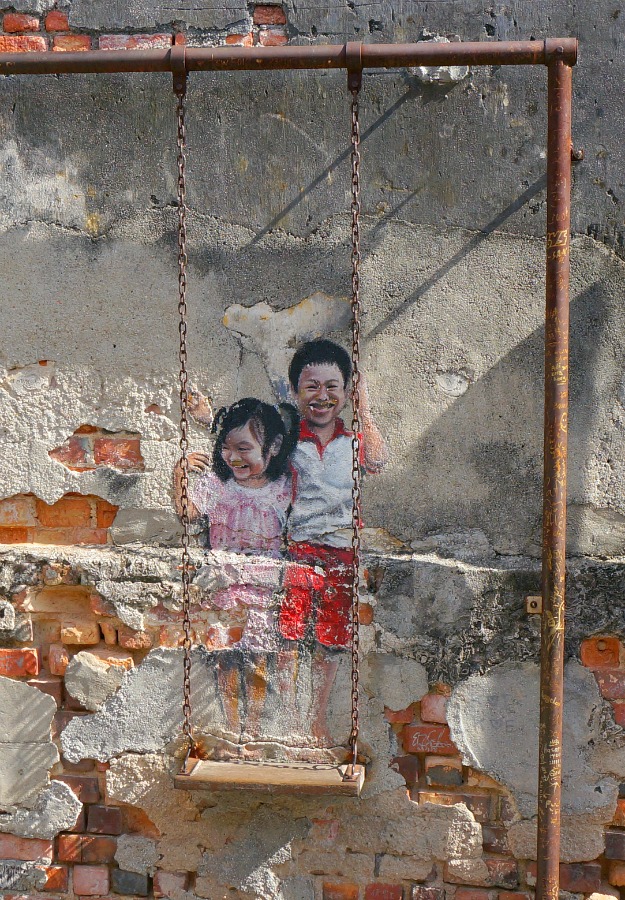 Ernest Zacharevic’s Mural of Children Playing on a Swing 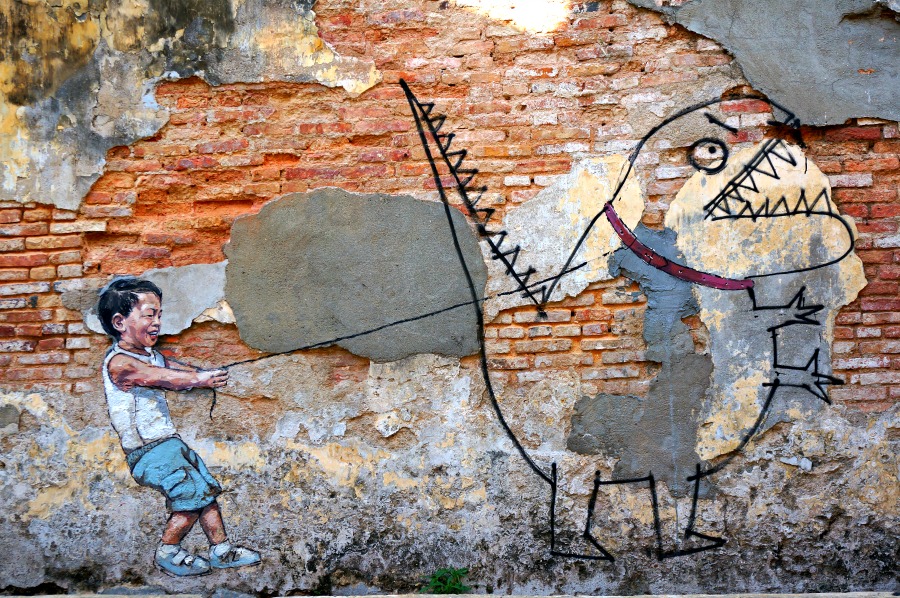 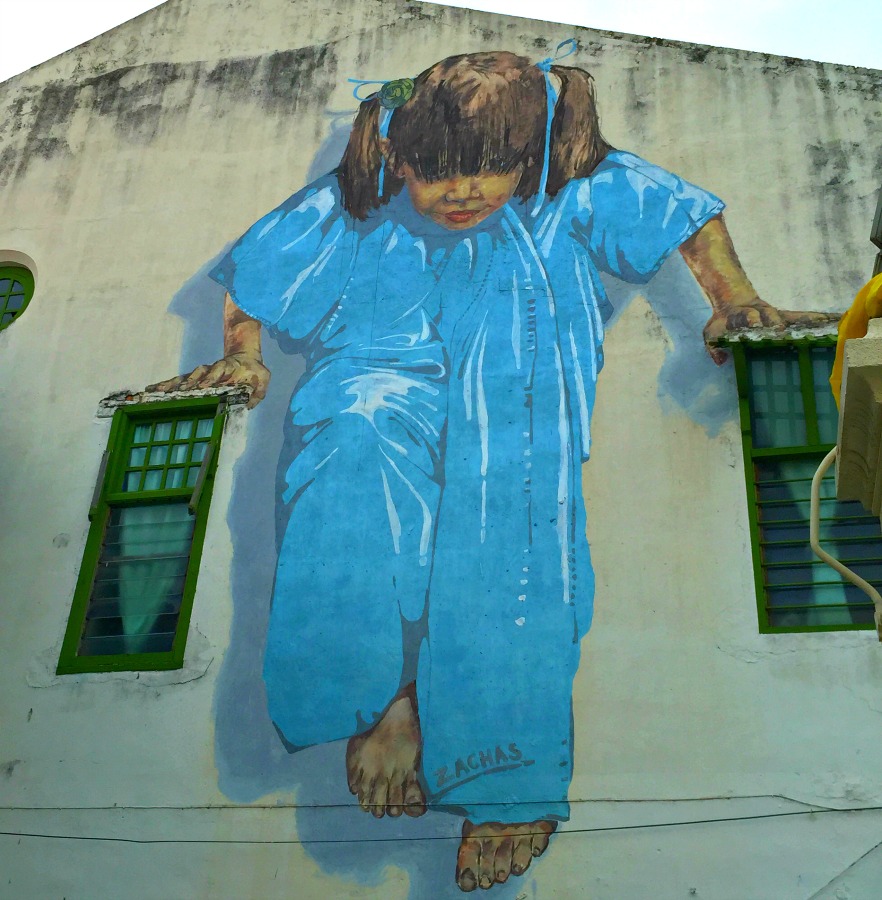 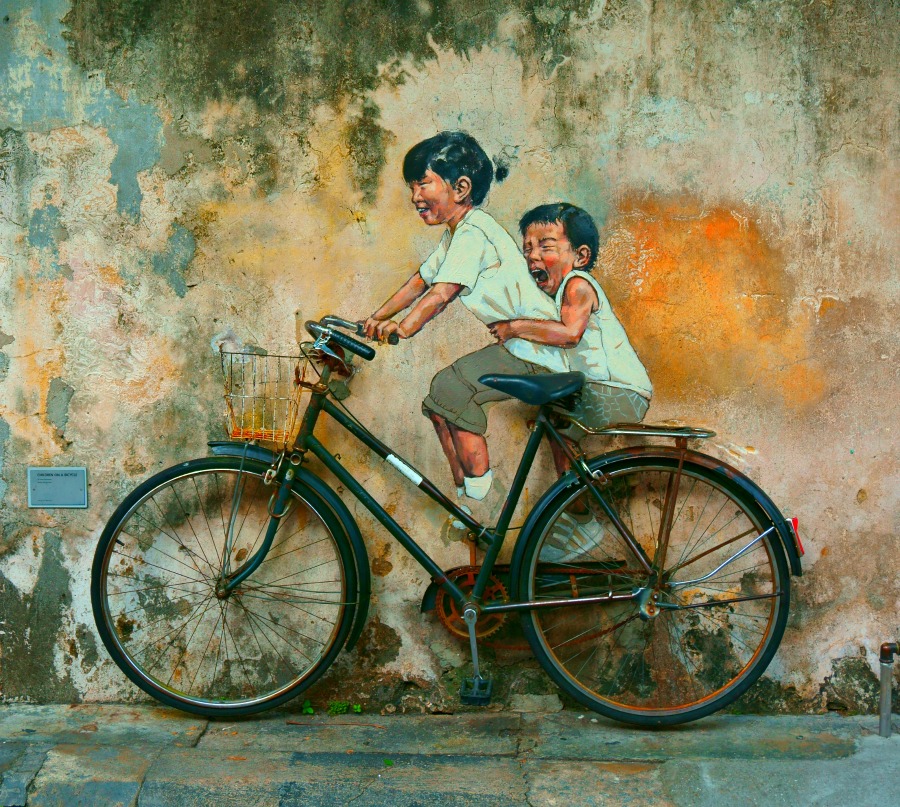 Additional artists have added murals throughout the city, making finding them a popular treasure hunt for tourists.

Restaurants and hostels have jumped into the fray, creating their own murals in similar styles, so around every corner is some form of artistic expression on the walls and buildings. 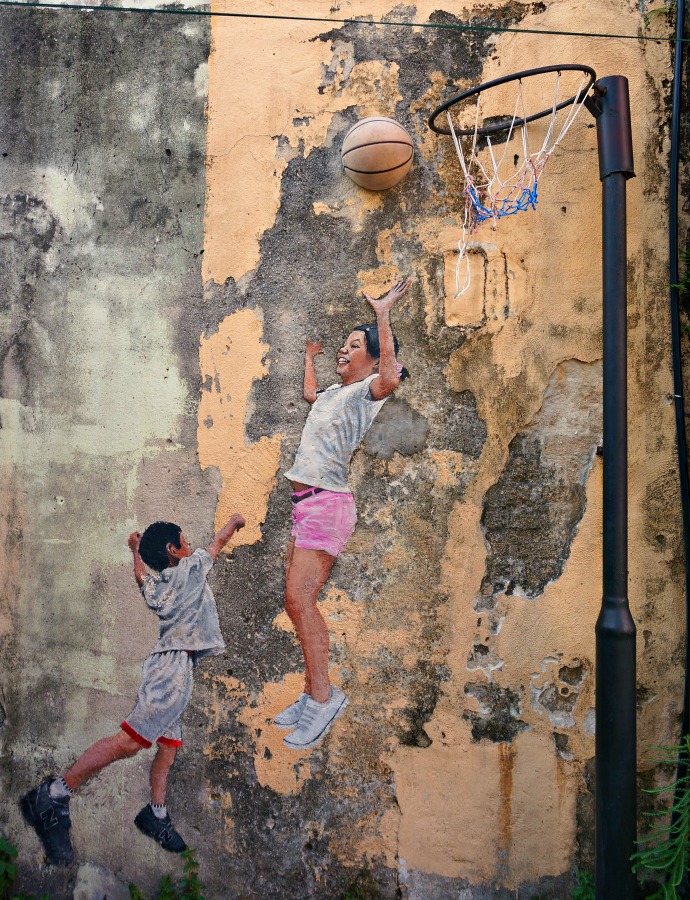 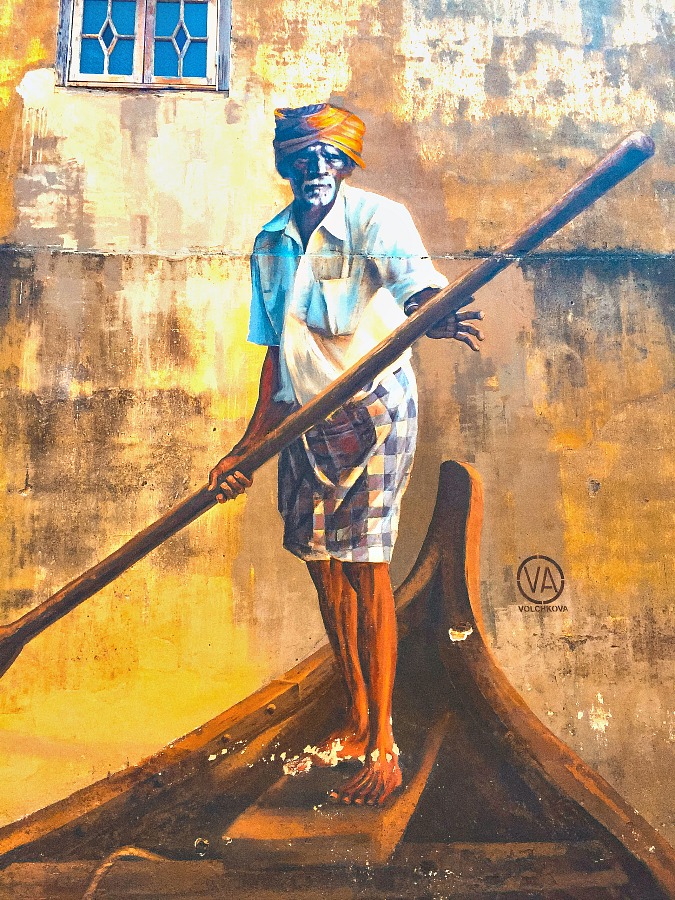 There are also cartoonish sculptures telling tales of the people of Georgetown done in wrought iron throughout the city. The iron sculptures were commissioned by the Penang State Government in 2009 as a celebration of the city’s earning the status as a UNESCO world heritage site.

The Malaysian studio SCULPTUREATWORK was awarded the contract to create the sculptures with their proposal of designing several pieces in the theme of “voices from the people”. There are currently 52 wrought iron sculptures decorating the streets of Georgetown.

Many of these sculptures highlight the part of the neighborhood where they’re located, telling some of the history of particular street or area. 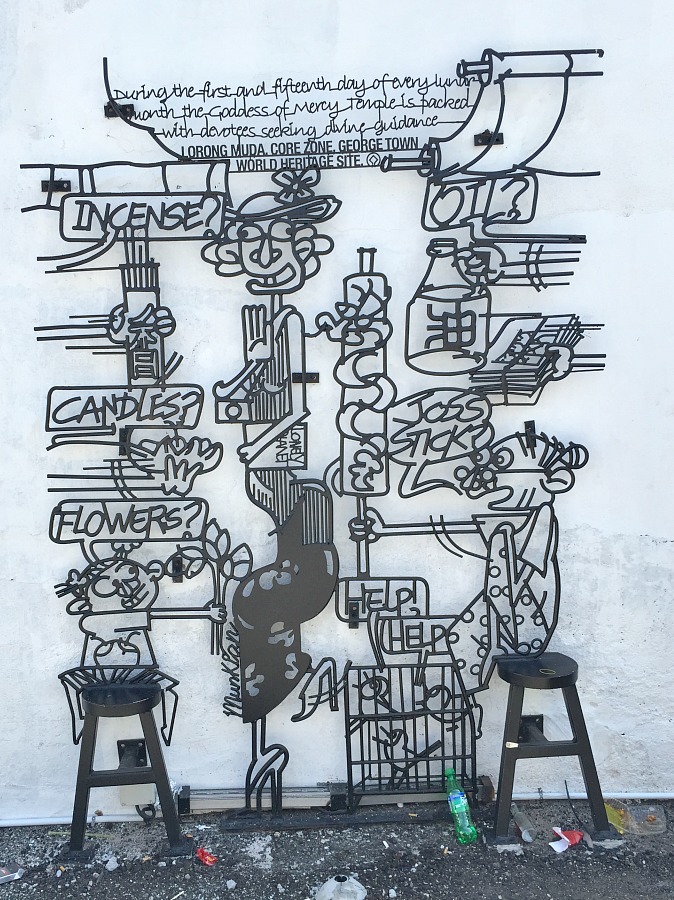 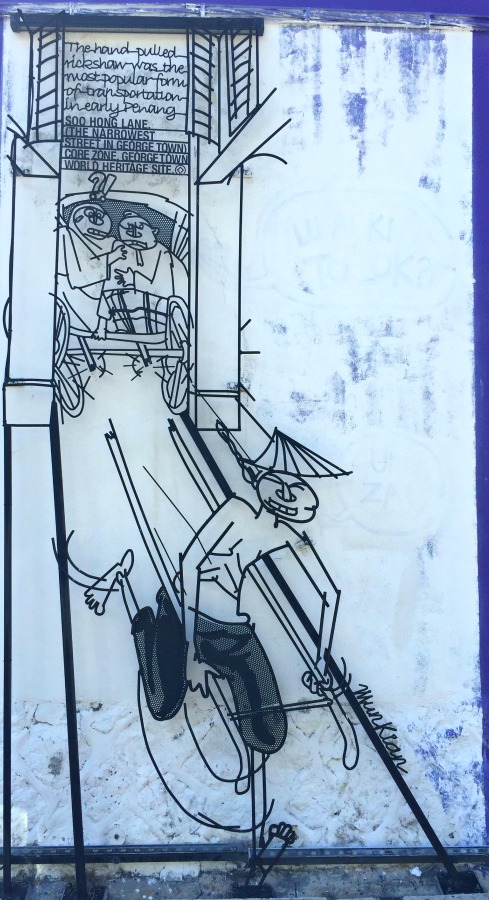 Below is a map of the street art in Penag. There are also free maps available in many shops in Georgetown. There is no choice but to look like a tourist with your open map, scanning the building walls for a peek at the treasures they contain.

Don’t worry, you won’t be alone. Searching out the street art is one of the favorite tourist activities in the city.

Some are more difficult to find than others, but luckily there are often proud Malaysians along the route to give you a hint.

Most are quite willing to take a moment out of their day to direct you around the corner or down an alley in order to make sure your don’t leave Georgetown without your perfect interactive street art selfie.

And if you enjoy the street art, get ready for another treat by tucking into some of the famed street food of Malaysia. But that is another delicious story of its own (coming soon!) As if you needed another reason to visit… 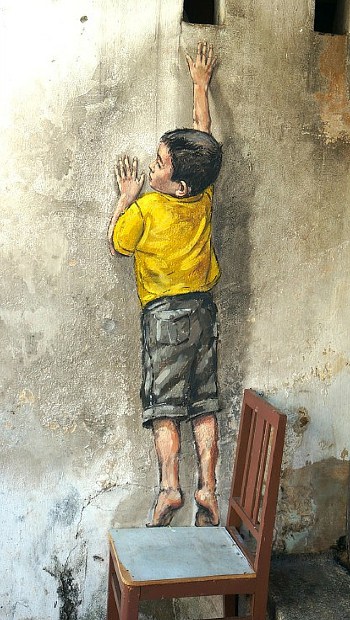 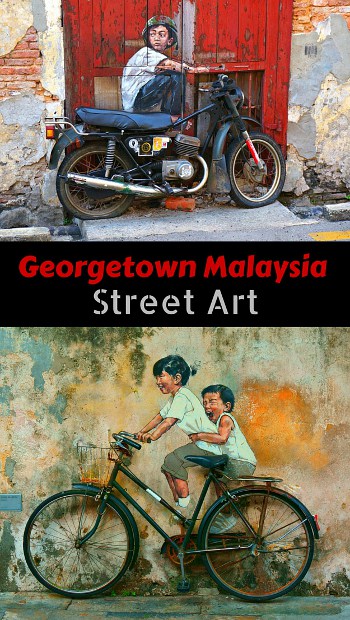