Ston Croatia and Mali Ston are two small villages located in the Pelješac peninsula of Croatia, less than 60 kilometers from Dubrovnik. We hadn’t heard of them before we came to Croatia, but that soon changed.

When we checked into our Airbnb in Dubrovnik, our host was curious about us. “No one stays two weeks in Dubrovnik,” he told us. “Well, we want to explore the surrounding area, as well. Do you recommend any day trips?” we asked. “We like places with good food.” He didn’t hesitate. “Ahh, Ston. You must go to Ston. They best oysters in the world come from Ston.”

We filed it away as a possible day trip. And, after spending a few days wandering Dubrovnik, we knew the trip had to happen. Menu after menu in Dubrovnik extolled the virtues of Ston oysters and seafood, which more all the encouragement we needed.

Ston and Mali Ston are approximately 53 km northwest from Dubrovnik. Public and private buses depart from Dubrovnik a couple of times a day, and run along the coastal route which takes less than an hour.

Due to the bus schedule, we chose to rent a car in Dubrovnik. This allowed us to follow our own schedule. We were also able to stop during the gorgeous drive along the coast for some spectacular pictures. Renting a car in Croatia is pretty inexpensive and easy.

There are also guided tours to the area that make the trip even easier. 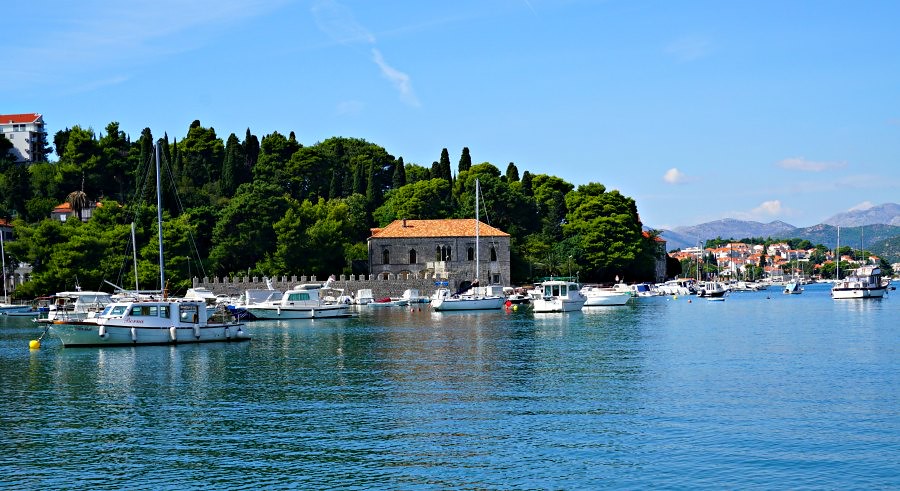 Mali Ston (which translates to “Little Ston” is just one kilometer from its larger sister village of Stone, and worth a stop on its own. The marina is crowded with restaurants, and even more important, free parking. We started our exploration here.

After parking near one of the restaurants, we wandered along the marina checking out the tiny hamlet. Beyond the restaurants and the marina, are the imposing walls that make up the end of the Wall of Ston – our second reason for visiting this area.

From the Mali Ston side, finding the entrance to the defensive walls was pretty easy. We just looked around for the tallest wall we could find, and then walked along it until we found an entrance. A small sign pointed us in the right direction. 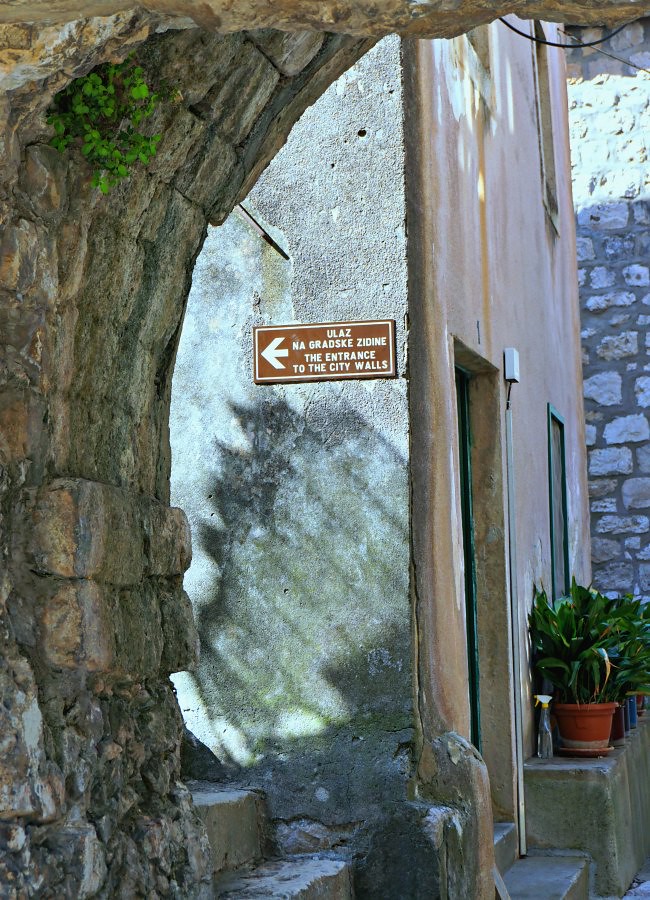 The admission booth charges 30 Kuna (a little over $4 US) to walk the wall, which is a small fraction of the cost to walk the city walls around Dubrovnik. We paid our entry, which was good for the walk out as well as the walk back, and then started climbing. While the walk is actually easy and pleasurable, some steep sections awaited us.

Get some great deals on flights and hotels! 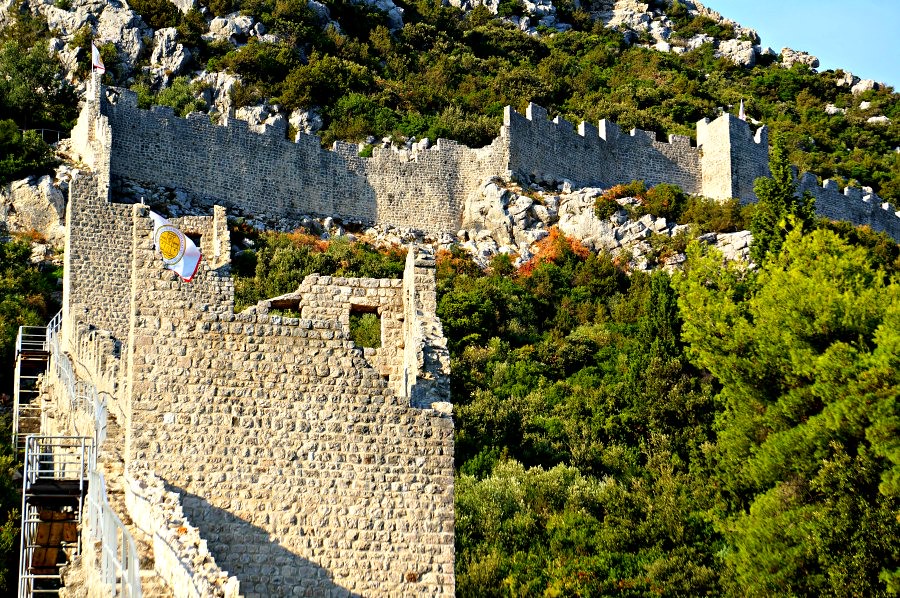 The steep steps of the defensive walls in Ston Croatia

Built in the 15th century, the Walls of Ston were originally over seven kilometers long, making them the longest fortress system in Europe. In fact, people sometimes refer to them as “The Great Wall of Europe”. Today, about 5 kilometers of the wall are open for exploration.

The fortifications served multiple purposes. First, they were a secondary line of defense for Dubrovnik, built across the narrowest point of the peninsula to block off invaders.

They also served to protect the village of Ston and the region’s very valuable salt flats, which are still in operation today. At the Ston Salt Works, salt is harvested by hand and loaded in large wagons for transport and processing.

After the fall of the Republic of Ragusa, the fortifications suffered from demolition, neglect, and the stone was used as building material for other projects. Today, however, the walls are preserved and there are clear efforts at restoration.

The View of Ston from the Top 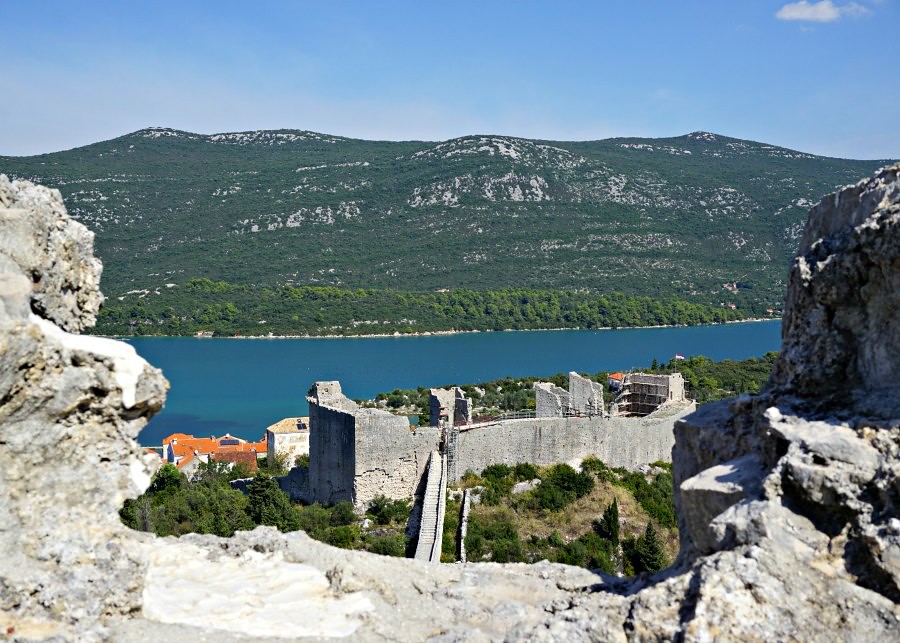 After the steep ascent from Mali Ston, our efforts were rewarded with terrific views. We strolled along the flatter portion at the highest point. From the top of the walls, you get a great view of the other important draw to this region: the oysters farms.

Beyond the town of Ston, in the blue water, the farm stretches out in floating grids. Oysters, mussels, and other shellfish are farmed within the grids.

For us, this was a great reminder of one of our main purposes for our visit: lunch, with LOTS of seafood. 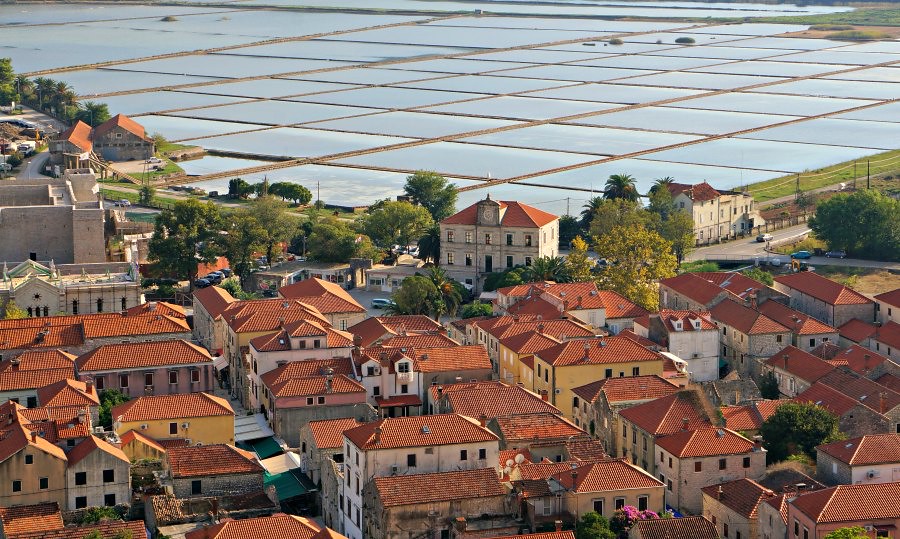 Where and What to eat in Ston Croatia

While the village does cater to tourists, there is still very much a small-town feel to streets. Most of the restaurants are relatively small, family-owned establishments.

The waiters and owners will welcome you in with open arms. You won’t notice the pushiness or desperation that you often find in many tourist spots. And once you sit down, you will be well taken care of. 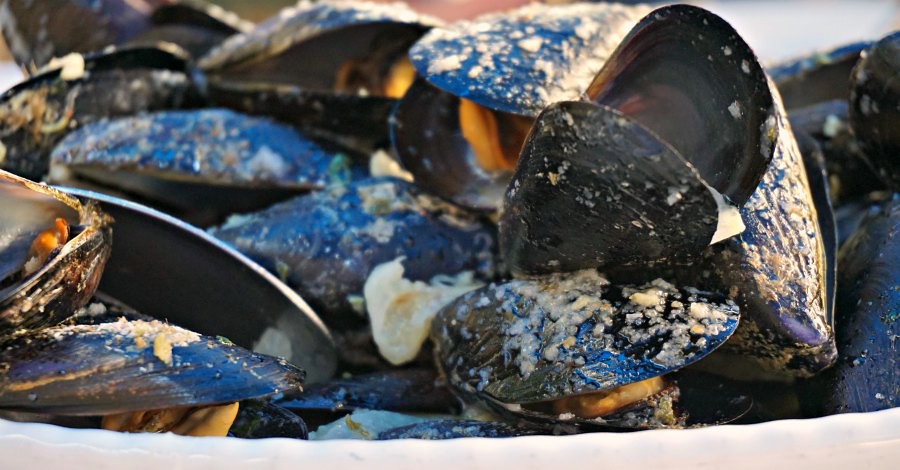 We perused a few menus and then randomly picked a restaurant with outside seating. With the village and peninsula almost surrounded by the sea, the menus were all chock full of endless seafood choices. Of course, we were prepped to eat oysters. But there were so many more option: mussels, octopus, whole fish, shrimp – you name it.

We ended up with a sampling of seafood. Raw oysters, which were plump and sweet; grilled oysters wrapped in bacon; and mussels sautéed in butter and white wine. And of course, a lunch in Ston would be complete without sampling some of the delicious, crisp white wine that these region is known for.

Get our full guide to Croatian Food! 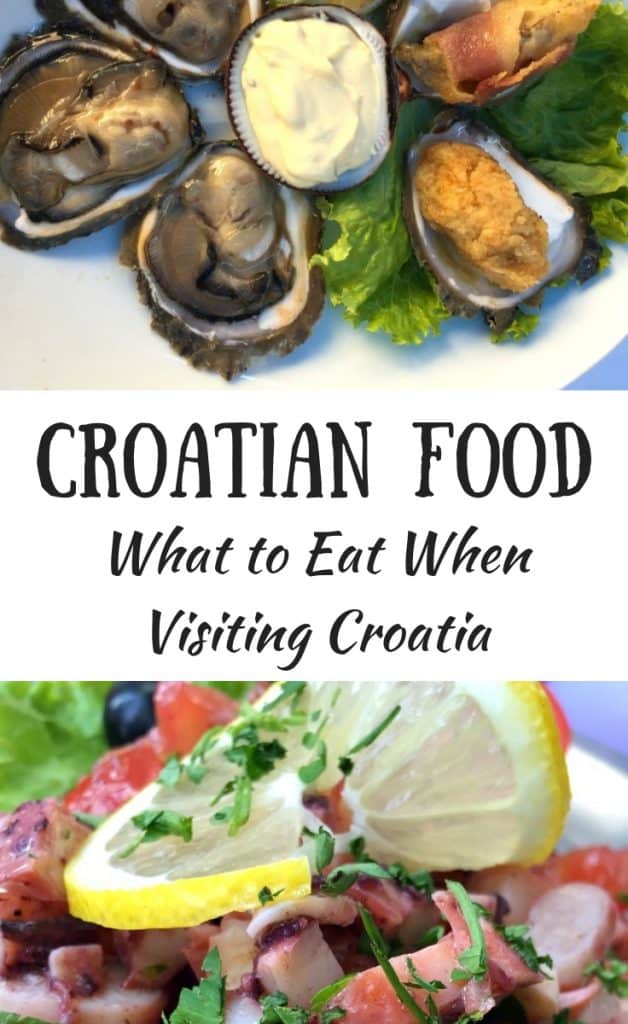 After retracing our steps back up and over the walls back to Mali Stone, we climbed into our rental car, with our legs tired and our stomachs full of seafood. On the way home, we discovered the final benefit to having the car and being on our own schedule: an amazing Croatian sunset on the way back to Dubrovnik, ending a perfect day in Croatia. 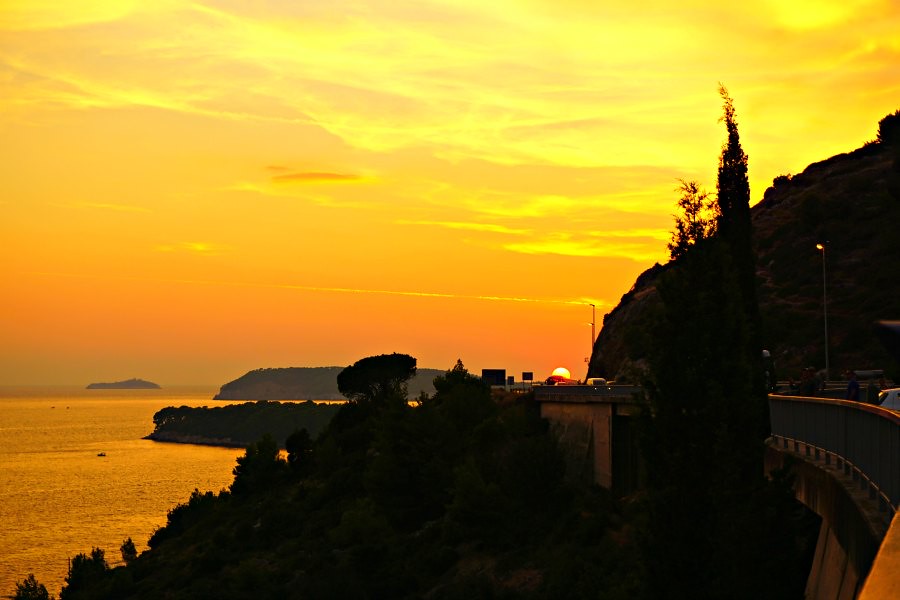 Sunset in Ston Croatia outside of Dubrovnik