Molcajete Salsa Verde (green salsa) is a tangy, bright salsa that is quite different from traditional tomato salsas. Making it using a molcajete, a traditional Central American mortar and pestle made from lava rock, imparts additional flavor and texture.

The green color (verde) of the salsa derives from the use of tomatillos rather than the ripe red tomatoes. The flavor is a little more lively and tart, which provides and interesting contrast to traditional red salsas.

What the heck is a tomatillo?

It’s not just a “little tomato”. Tomatillos come from a completely different plant than a tomato, but they are both in the nightshade family. Tomatillos are indigenous to Mexico, and in some ways resemble small, unripe tomatoes – which is why the Spanish called them “little tomatoes”.

The fruit of the tomatillo has a papery husk, that should be removed and discarded. Without the husk, the fruit has a sticky film on the surface, which should be rinsed off with warm water. 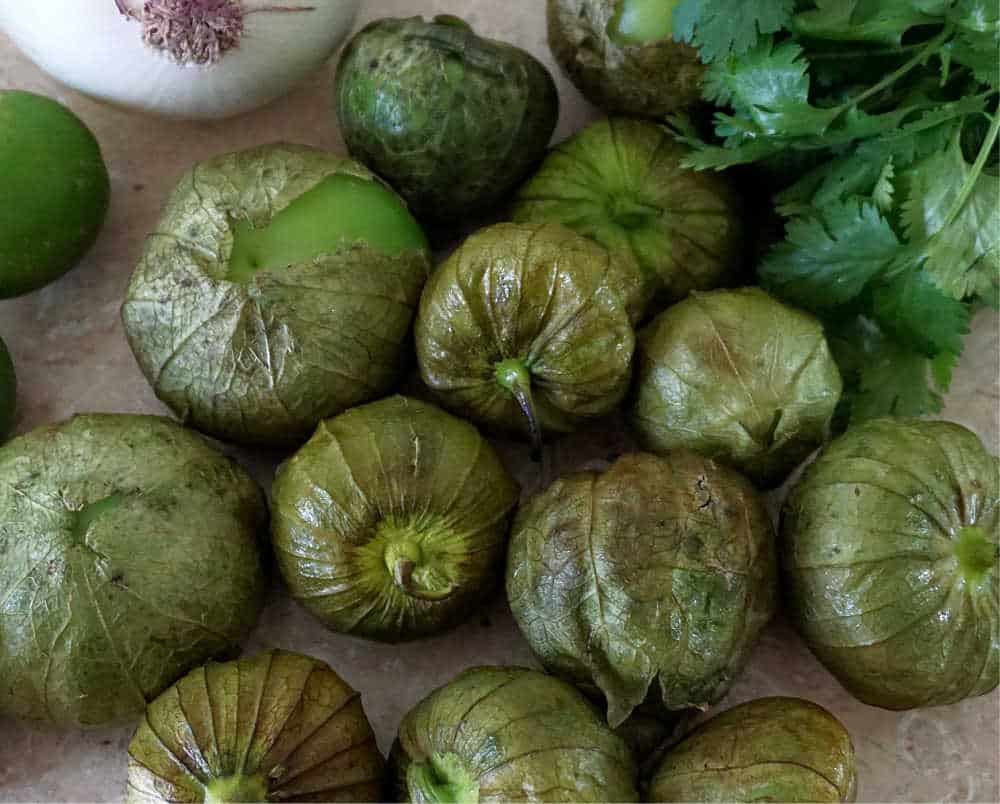 Tomatillos (and other ingredients) for Salsa Verde

All that said, if you can’t find tomatillos for this salsa, you can replace them with green tomatoes. The flavor will differ, as tomatillos are more acidic and slightly less sweet than tomatoes, but you will still get the green color and bright flavor that makes salsa verde.

If using green tomatoes, squeeze the juice of half a lime into the salsa.

A molcajete and tejolote are a form of mortar and pestle traditionally used in Mexico. The bowl is made from a single block of basalt (volcanic rock), and has a rough, porous texture that makes it an excellent grinding/crushing surface.

Molcajetes have been used for several thousand years, including in the Aztec and Mayan cultures. You can think of them as the original cuisinart of this area of the world. 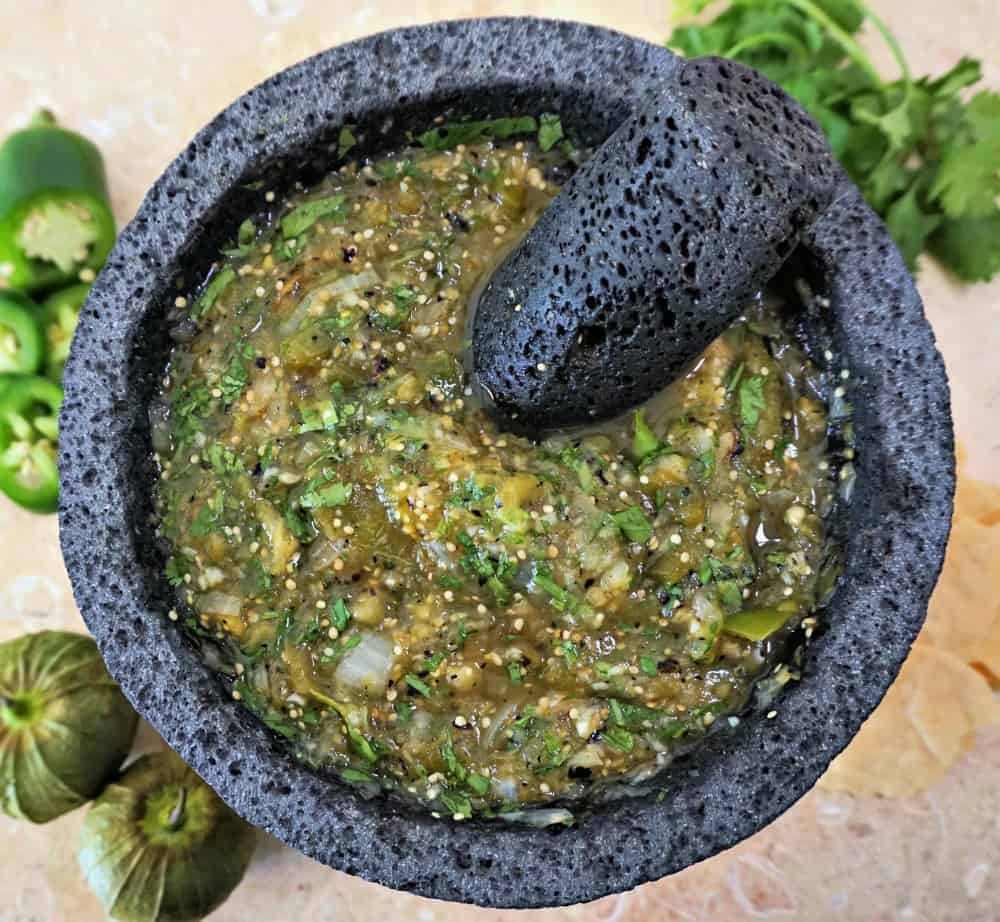 Because the surface of the bowl is so porous, the molcajete should be treated like a good cast iron skillet. It needs to be “seasoned” before being used, and the flavors from the last few dishes come forward into the next dishes made in the bowl.

Some chefs insist that the grinding process imparts some of the minerals from the bowl into your recipe as well, setting salsas made this ancient way slightly apart from those using modern appliances.

You can, of course, prepare this salsa in a different mortar and pestle instead (such as one made from granite), or even in a blender – but be careful not to overblend. This dish is meant to be rustic and chunky. 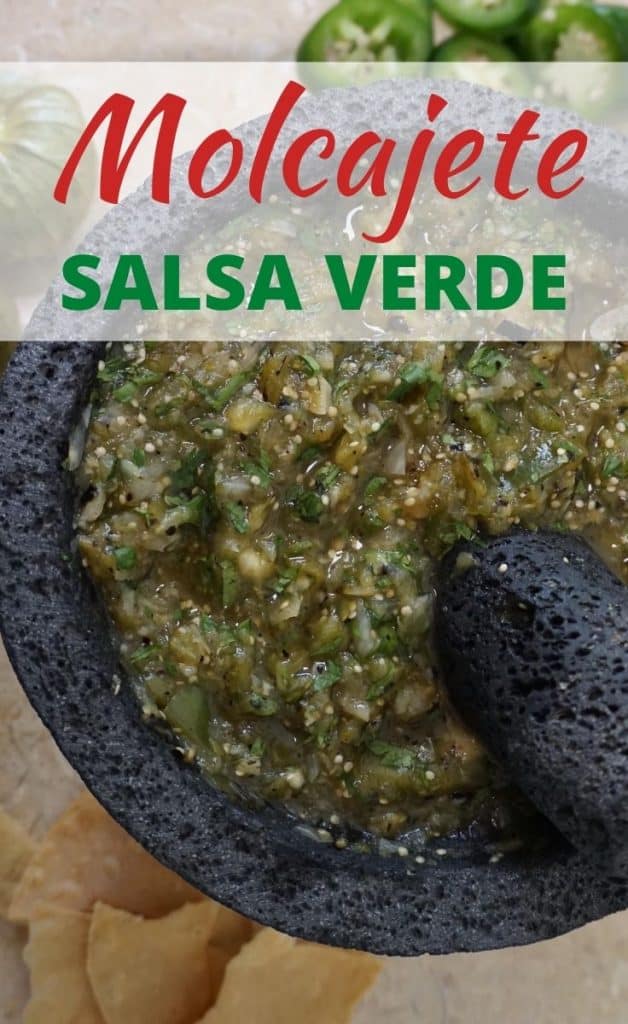 Salsa verde can be prepared a few different ways. For a raw salsa, simply combine all the ingredients in the molcajete (or even a blender), and grind until smooth.

We prefer a cooked version, so we’ll start with roasting all the vegetables. This brings out a little more sweetness and a subtle smoky char flavor that we love. 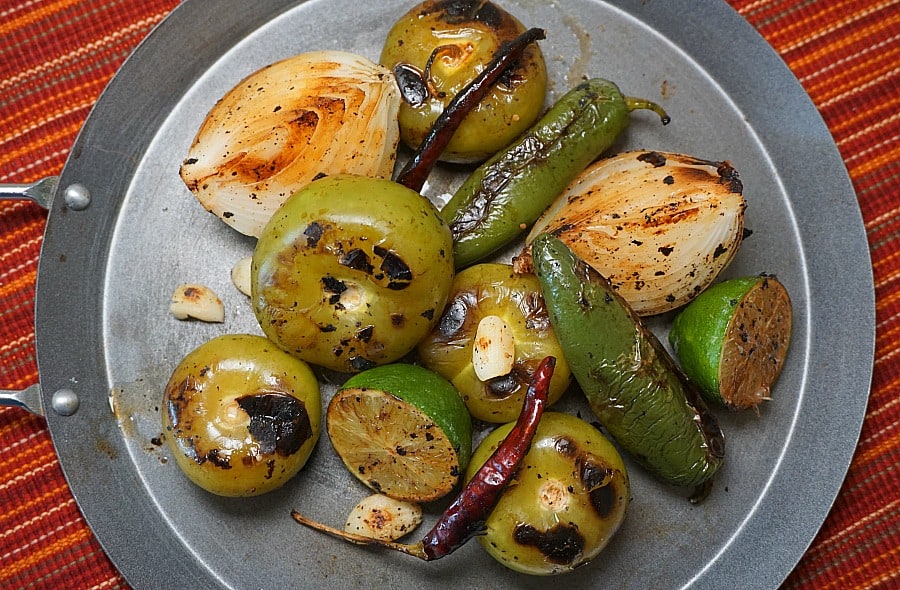 Roasted Vegetables in a traditional Comal

The typical pan to roast the salsa ingredients in Mexico is called a comal. It’s basically a smooth, flat griddle that is heated over a fire or on the stove.

The comal is typically used for all sorts of things: cooking tortillas, toasting spices, grilling meats, and of course, blackening vegetables for salsa. 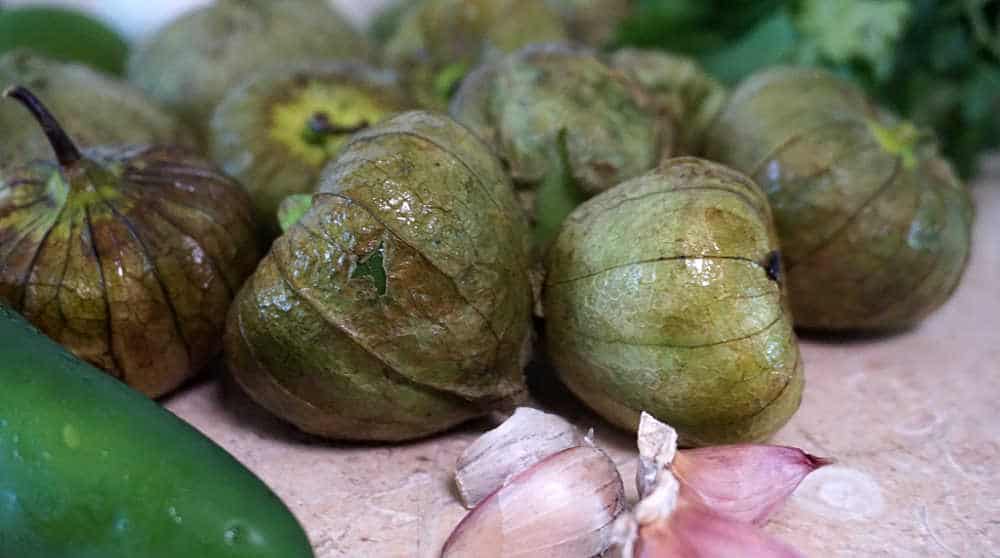 Traditionally comals were made of barro, or clay, in indigenous communities in Mexico and Central America. It’s far more prevalent these days for them to made with cast iron.

So, in case you don’t have a comal lying around (who does?), you can use your trusty heavy cast iron pan for roasting and blackening of the salsa ingredients.

What do you serve with your molcajete salsa verde?

There’s really no limit! Tostadas, enchiladas, chilaquiles, huevos rancheros, or tamales are all improved with this salsa. Even just serve it with tortilla chips. It makes a great addition to our Aguachile Verde as well. The question is, what isn’t improved with molcajete salsa verde?

Here are a few Mexican Inspired dishes that you might enjoy! * The better chopped the ingredients are before adding them to the molcajete, the less work grinding and mixing you'll need to do.

This sounds so delicious. Can't wait to try it.

Have you ever canned this salsa?

Personally, I haven't canned it - it is usually eaten too quickly after making it! But there's no reason it couldn't be, using safe canning techniques.