Amate Paper Art is an ancient form of folk art in Mexico with a rich past and an unclear future. We discovered these fascinating pieces when wandering down 5th Avenue in Playa Del Carmen.

As with so many shops along this touristic street the owner enthusiastically asked us to come on in and take a look. Usually, we keep walking, but in this case, we went in. 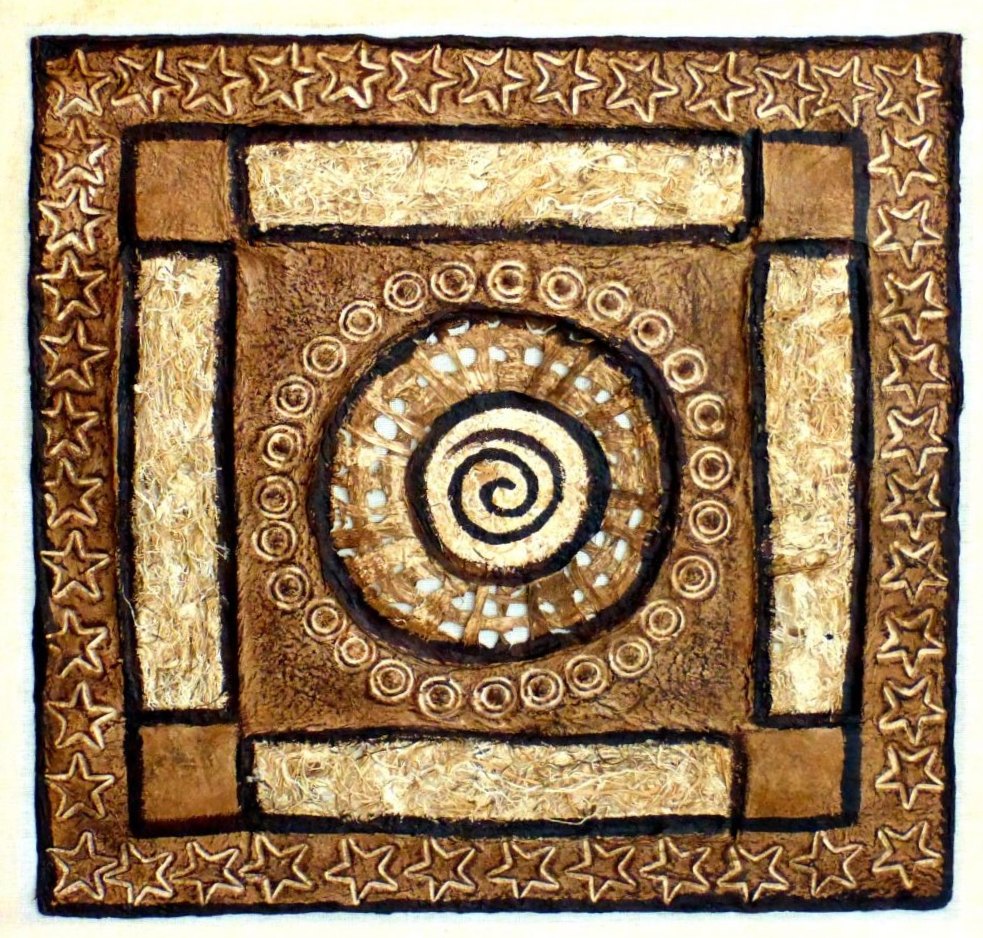 The shop was full of Amate (bark paper) in all shapes and sizes. We learned that it is made by taking the bark and boiling it for a full day with a softening agent.

The bark is then cut into strips and flattened with a rock (usually volcanic or granite) and fashioned into a thin sheet or woven into intricate designs.

The brown pigment left behind in the process of boiling the bark is then used to enhance the painting.

In some cases additional colors are added. The process has ancient roots that date back to pre-Hispanic times in Mexico and has changed very little over time. 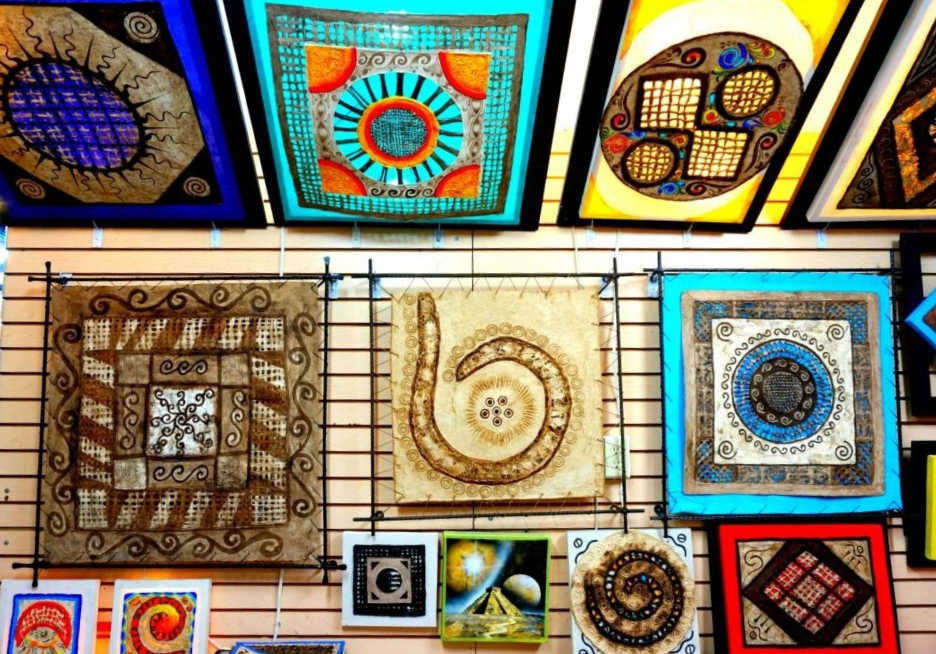 The paper was extensively used by the Aztecs as gifts for warriors, in religious ceremonies and as gifts for royalty.

When the Spanish arrived on the scene in the 1500s the process of making the bark paper was banned because they felt that it was used in witchcraft and magic. There was a resurgence of bark paper use during colonial times when paper from Europe became scarce.

The ficus, the most common tree from which the bark is harvested, grows deep in the mountainous regions of San Pablito in the north Puebla.

Today the paper making process remains an important part of the culture and economy for the indigenous people. 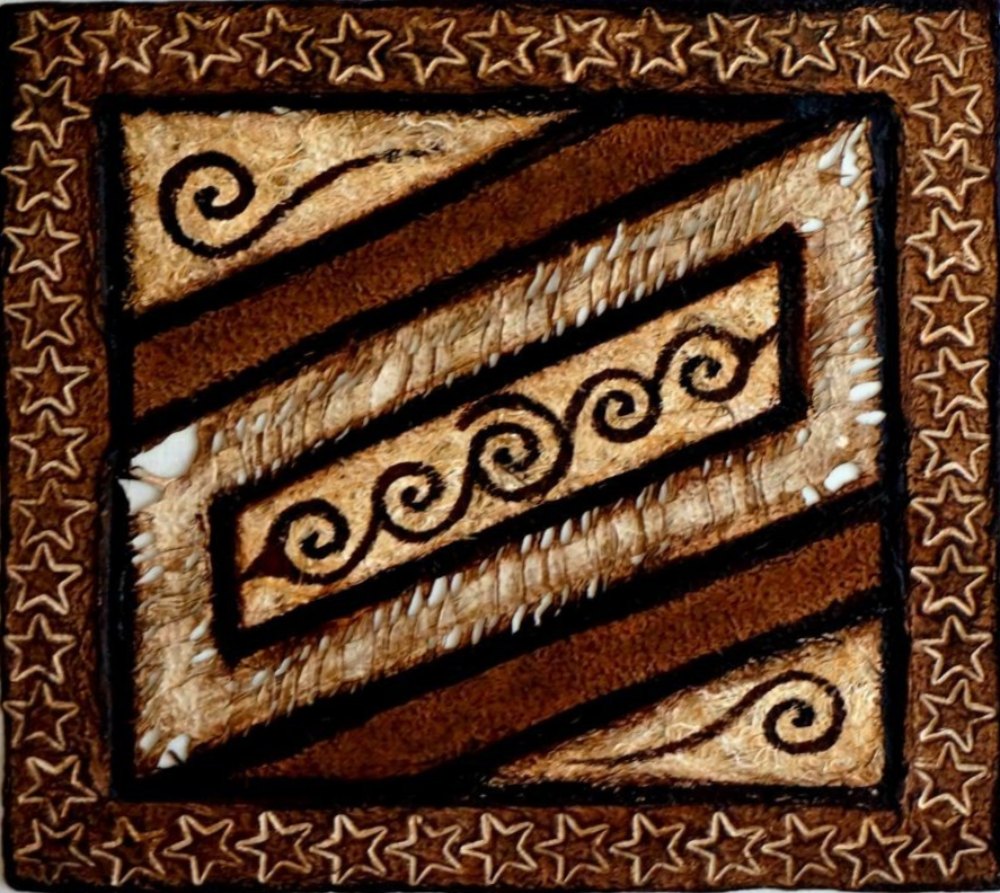 Commercial production began in the 1960’s. Prior to that the paper that was manufactured in these small villages for ritualistic purposes only and was thought to have magical properties.

Shaman began documenting the meanings ascribed to the symbols in the paper by developing sample books. The resulting small pages became very popular and sharply increased sales of the artwork.

The loser in this process has been the ficus tree itself. In pre-Hispanic times the bark was only collected from the adult branches of the tree.

Bark would be removed from ficus trees that were over 25 years old, when the bark almost comes off by itself and less damage is done to the tree. 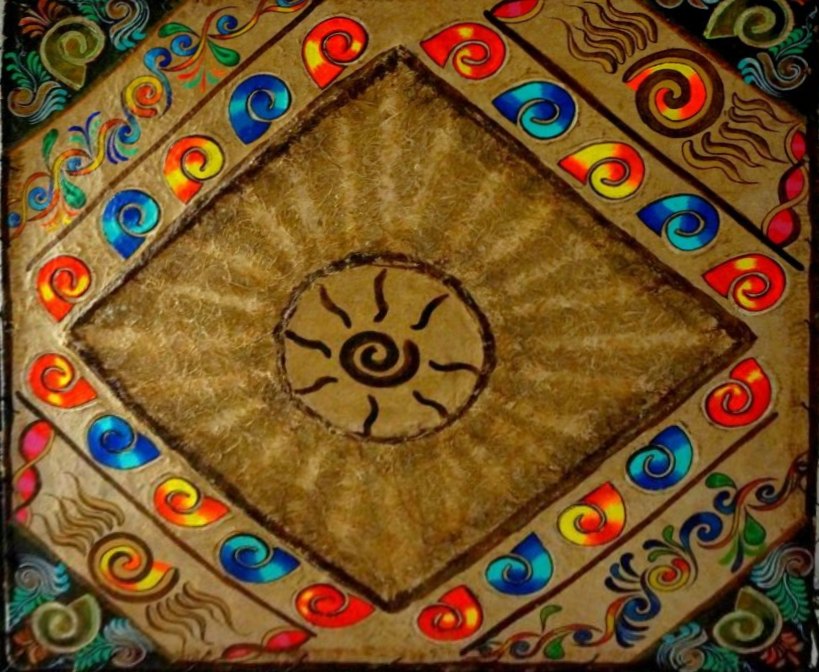 Colorful Amate displayed on the ceiling

The sacred tree would be thanked for its gift and surrounded by candles. As demand grew and production has stepped up another notch, young trees are now stripped of their bark – as we saw in the video at the store we visited.

Industrial chemicals have been added to the production process, increasing the environmental impact and having a potentially toxic effect on the artists.

Up until learning this we were pretty excited about the Amate art and thinking about where we could hang a piece on our wall. 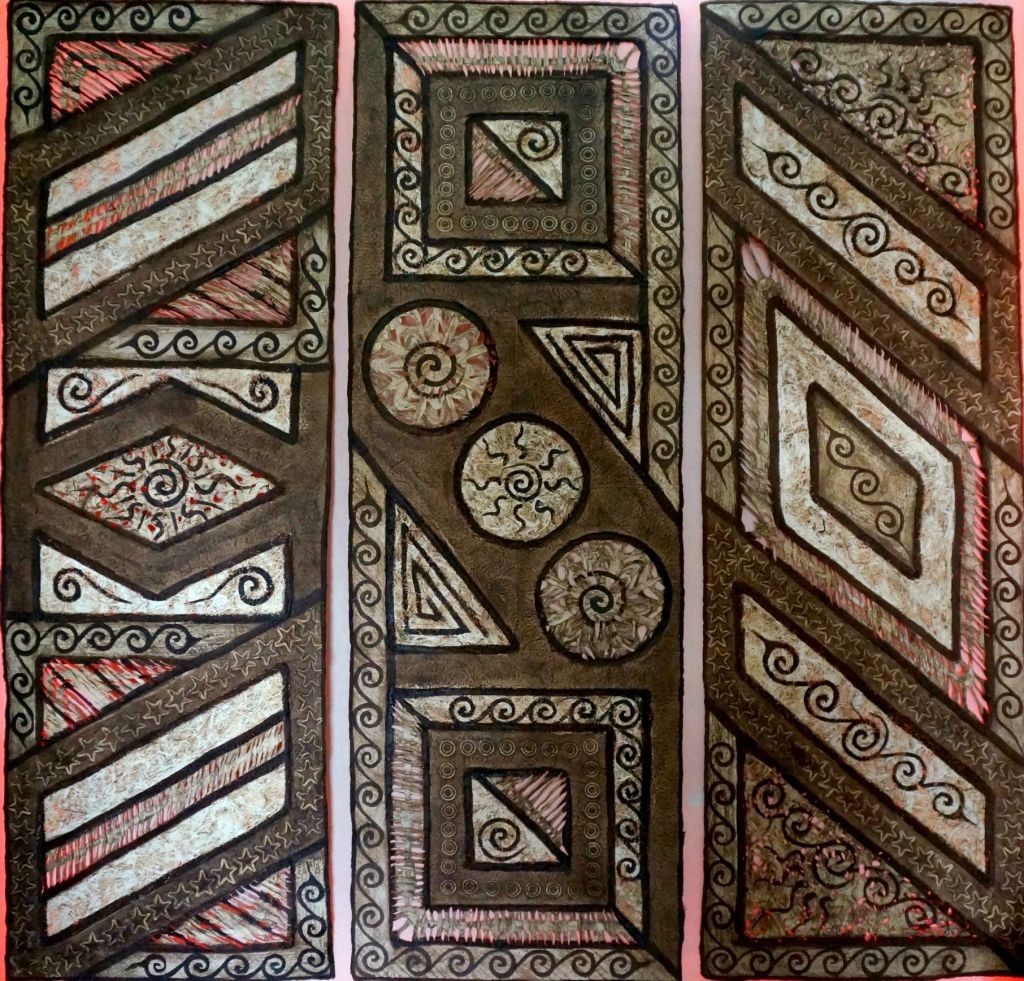 Sample of symbols found in Amate works of art.

We are still debating the pros and cons of purchasing a painting that has such deep roots in the Mexican culture. 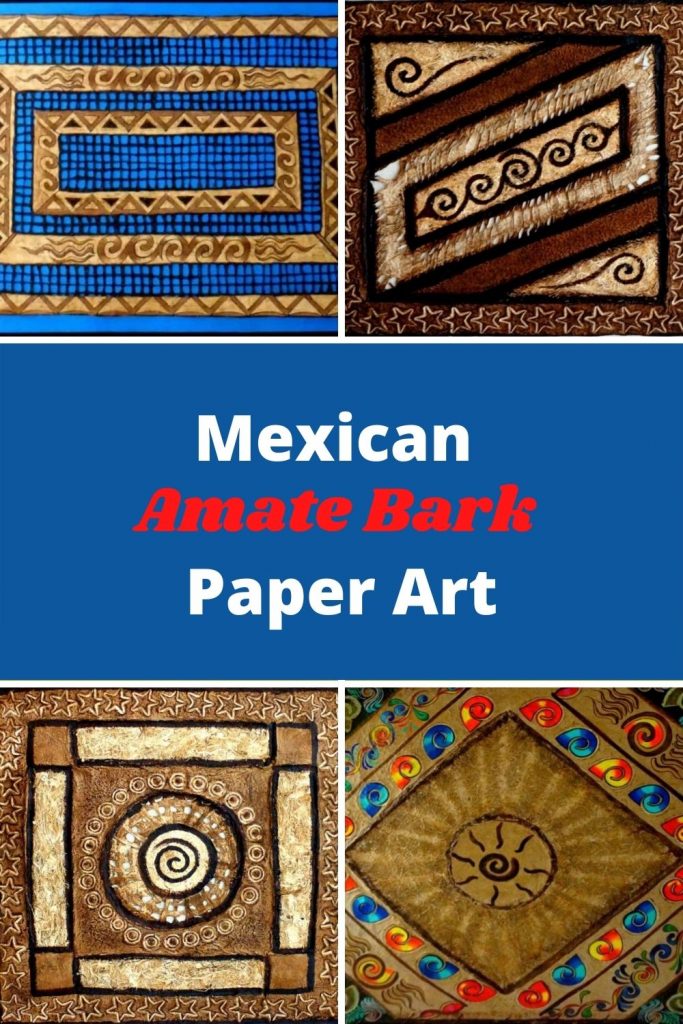 We enjoy the idea of supporting the economy of the artists and their community, but are concerned about damaging the ecosystem and trees that make its production possible.

Not to mention risking the health of the artists themselves. At this point, that spot on the wall is still empty. What do you think?

Related Stories about Travel in Mexico: 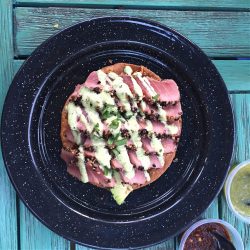 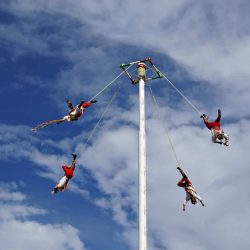 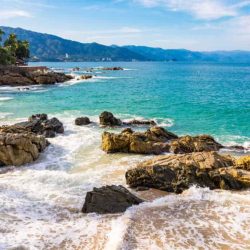 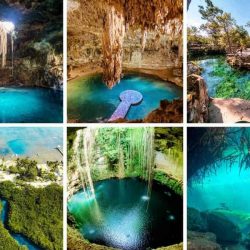 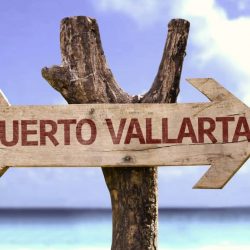 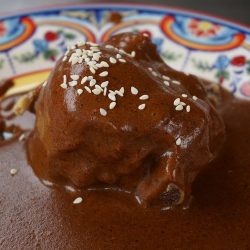 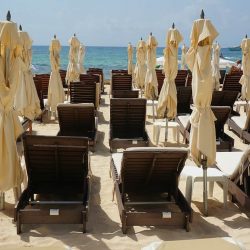 I bought a piece of the sculptural, textured type of wall hanging because I am fascinated by and collect textural fiber arts and indigenous art forms - Arctic soapstone sculpture, southwest pottery, rug hooking, quilting, etc. Having bought a piece of amate paper art, I went off to learn more about it, and now can use my piece to educate people via conversations it will start, and I can donate to a water project or related initiative toward improving the eco-responsibility, while enjoying and appreciating the skill, technique and work that went into my piece. It's a compromise.

What an amazing article, I had no idea about the environmental impact of traditional art like this. For me though it's a no brainer. As much as I agree about supporting local artists and culture, the fact that it is having such an environmental impact makes it a no go for me. At the end of the day where will the culture be when there are no trees left? Thanks for a thought provoking article.

Beautiful art - I had no clue they were made from a ficus! It's unfortunate the have to destroy their own land to create art - which I'm sure brings in money...

Wonderful images and artworks that express such culture. I understand the dilemma though, I think in the modern day there must be a way of making these that is true to the culture but safe for the environment.

I grew up with these in my house, my Mom lived in Mexico as a kid and they carted the painting/art pieces around. I think they are beautiful but they do have a controversial element. That's a hard one, I'm not sure if I'd buy one now.