Taking the Marrakech Cooking Class at La Maison Arabe was one of our favorite things to do in Marrakech.

When we first arrived in Marrakech, one of the first things we wanted to do was to the try a tagine dish. A tagine is the cone shaped vessel that Moroccans use to slow cook dishes with combinations of meat, vegetables, and spices or fruit along with a special blend of spices.

Sounds delicious – and it is! One of our favorite tagine dishes was Chicken Tagine with Preserved Lemons. We didn’t want to leave Marrakech without learning how to make it.

After doing a little research we decided to take the Moroccan cooking class at La Maison Arabe. The cooking school is attached to a restaurant and hotel.

The plan for the day was to cook several dishes (including the chicken tagine), visit a local baker who makes bread in a wood fired oven for the local neighborhood, and allowed the option for wine pairings with each course.

Everything we could ask for in a cooking class, with a few bonuses (and even a few more during the class).

The class was schedule to be about five hours long. Smartly, they started out by giving us a demonstration of how to make a typical savory bread, Msemen, in this case stuffed with vegetables.

The texture of the dough is like a very thin pizza, made lighter by folding it over several times and making it on a grill (or pan in the home version). 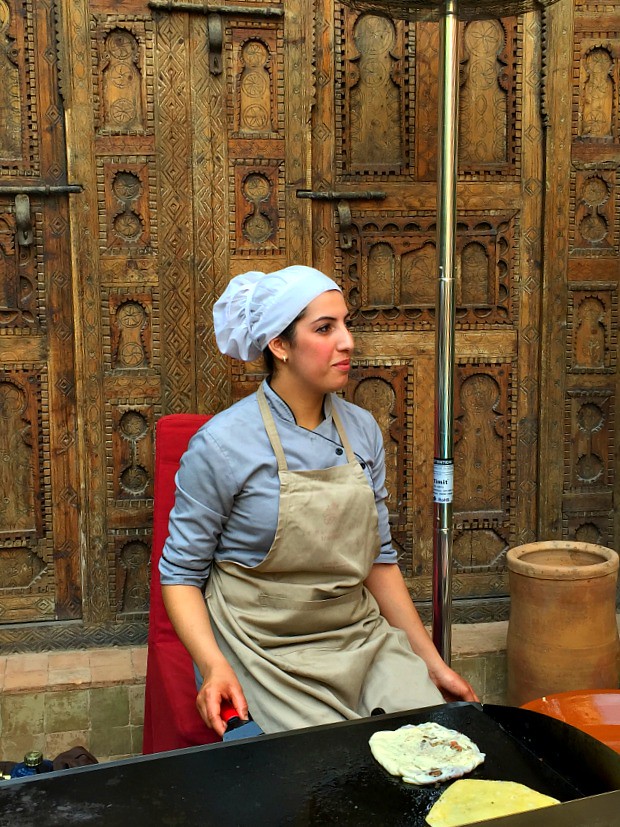 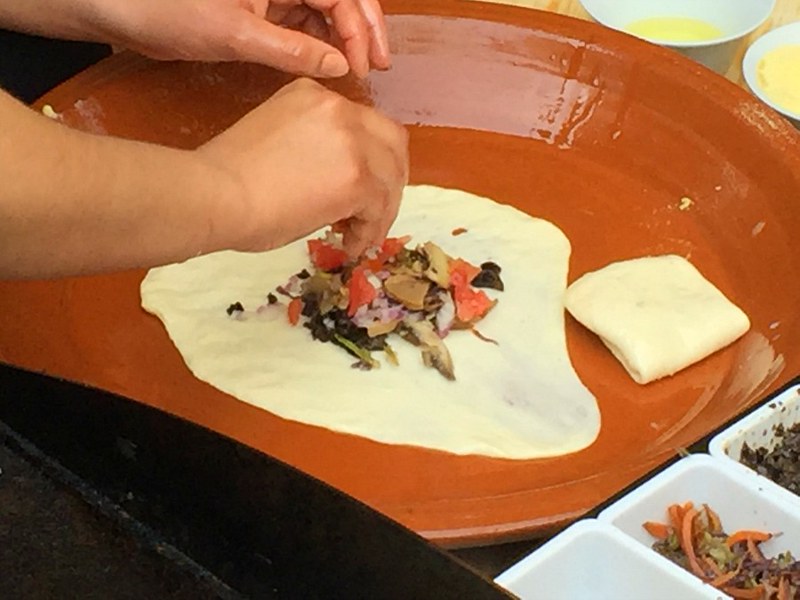 We happily sampled our bread while our guide gave us an overview of Moroccan cuisine and its history. It’s complex flavors are a blend of the many cultures who have called this North African nation their home over the centuries.

Our cooking lesson started with being introduced to the Dada, or Chef, who gave instructions throughout the day through our translator/guide. 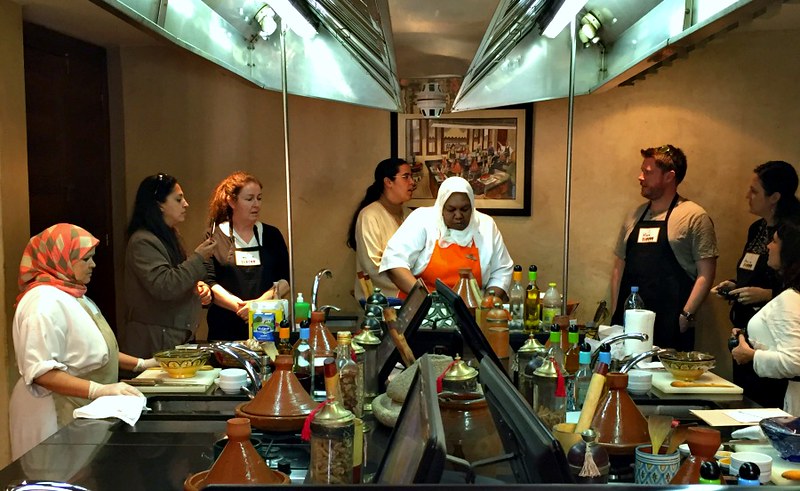 We were ready to our next demonstration – making a traditional Moroccan bread, or kobtz. I can’t remember a meal that we had in Marrakesh that wasn’t accompanied by a round loaf of the bread. 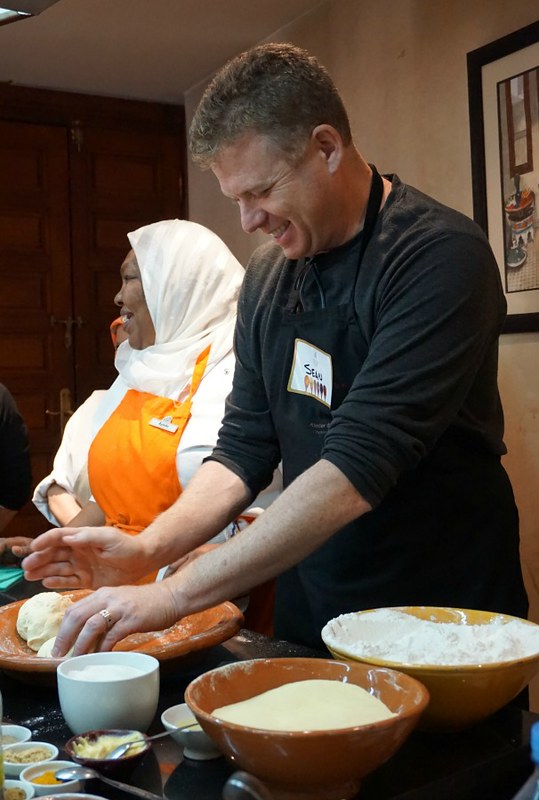 The highlight was being able to visit the neighborhood baker, who graciously allowed us to watch him tending the bread as it baked in his huge oven.

While we were visiting several neighbors stopped by to drop of their own loaves which would be baked and ready to be picked up for meals later in the day. 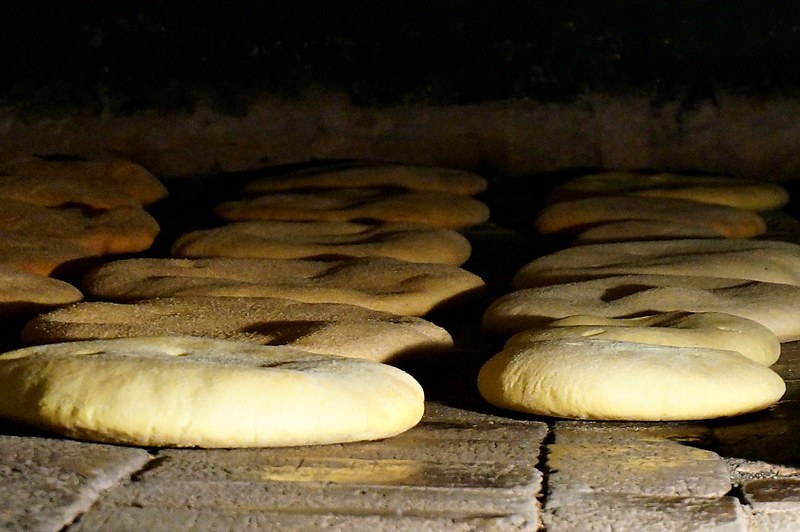 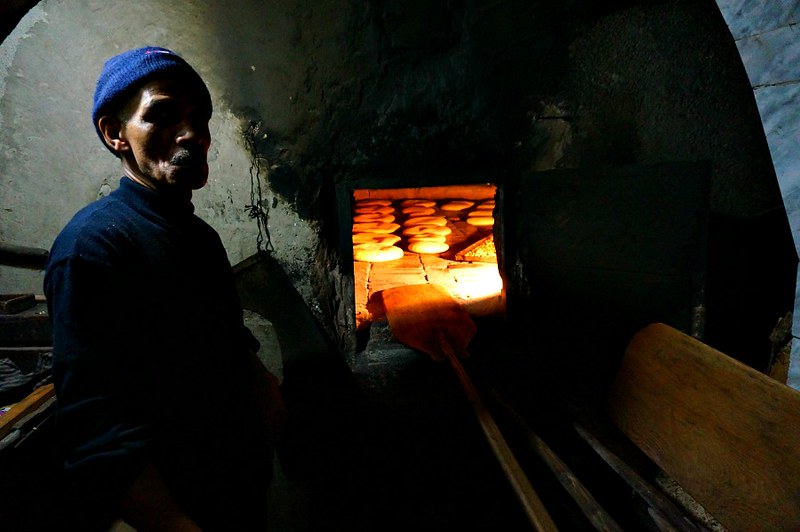 The next portion of the class was all hands on. We first diced aromatic vegetables and added them to our tagine along with our chicken and the pulp 1/2 preserved lemon.

The tagine was joined by some typical herbs, such as ginger and cumin, covered in water and set to simmer for the next 45 minutes. 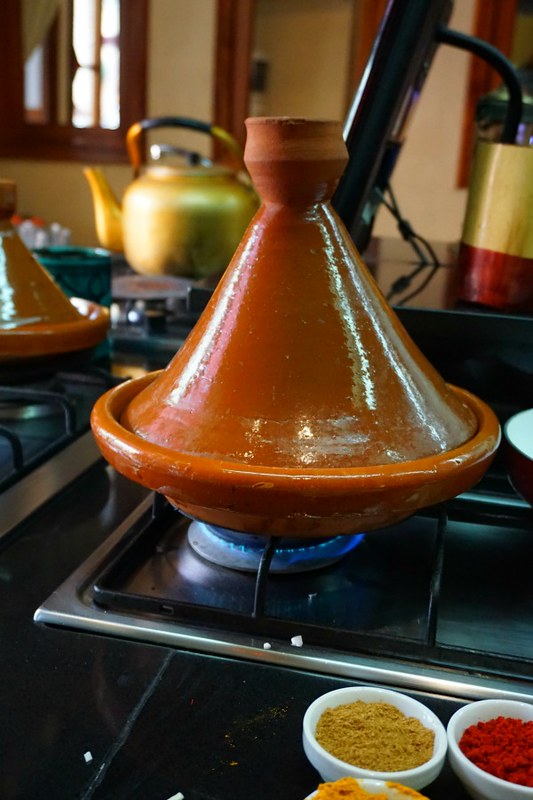 The aroma of the tagine cooking filled the kitchen as we prepared 2 more dishes. A tomato salad with a grilled green pepper (Taktuka) and a cooked tomato and eggplant dish (Zalouk salad) both very typical Moroccan dishes. 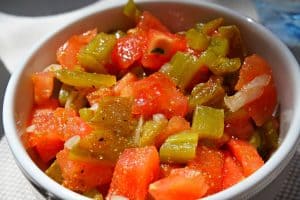 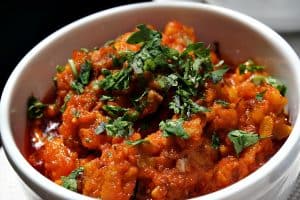 Now the best part – time to eat. The Chicken Tagine, now paired with the preserved lemon peel and some briny olives, was fantastic. 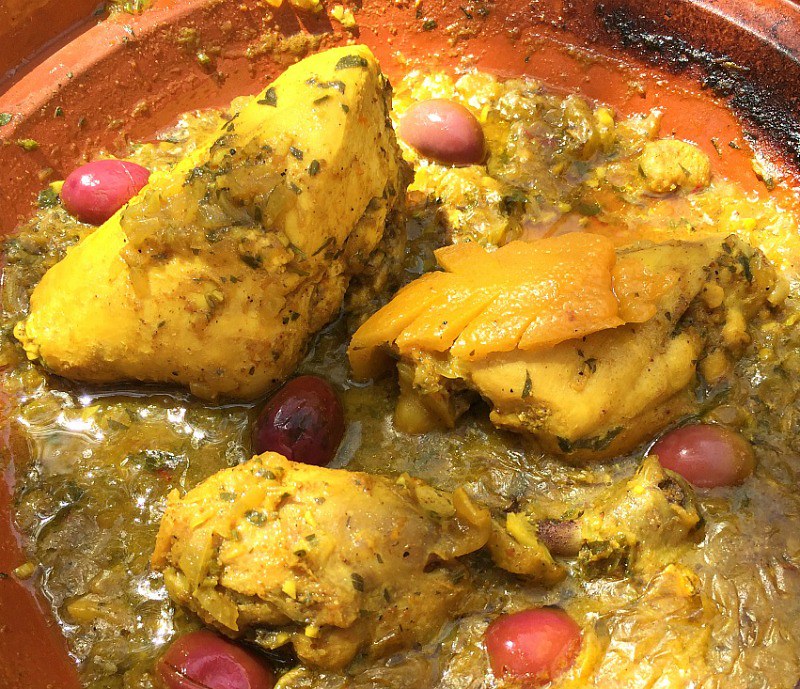 We were pretty full at this point. I had even given up and encouraged Sean to finish my chicken, and he happily obliged. But do you think that stopped us from eating the dessert when it was presented? 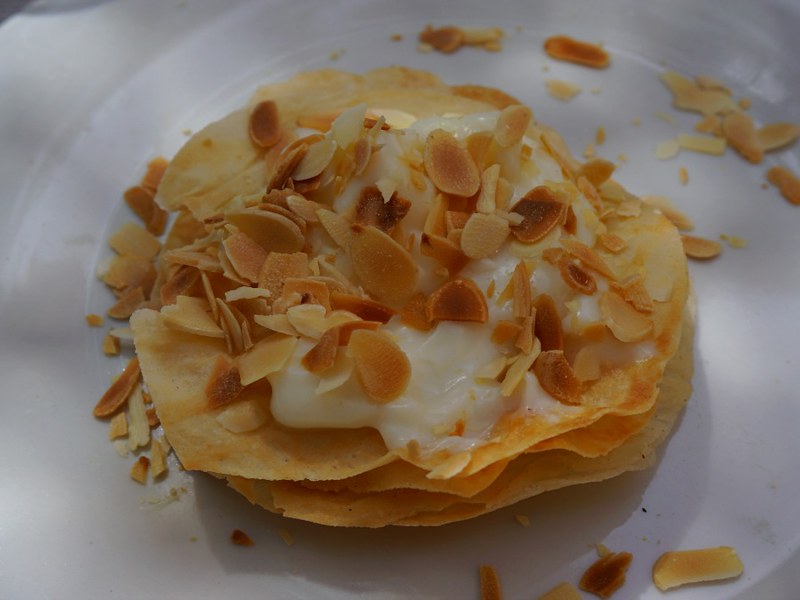 Over-stuffed but very happy, we rejoined the staff in the kitchen for a few more surprises. Our Dada gave us a flourishing demonstration of making Moroccan Mint tea.

There are a number of steps involved, including allowing the tea to steep, pouring out 2 glasses, discarding the second, adding the first cup back into the pot.

Finally the tea is poured into a cup full of fresh mint and a good dose of sugar. The more accomplished the chef, the higher they will pour the drink into each glass. Very refreshing and a wonderful way to the end the class. 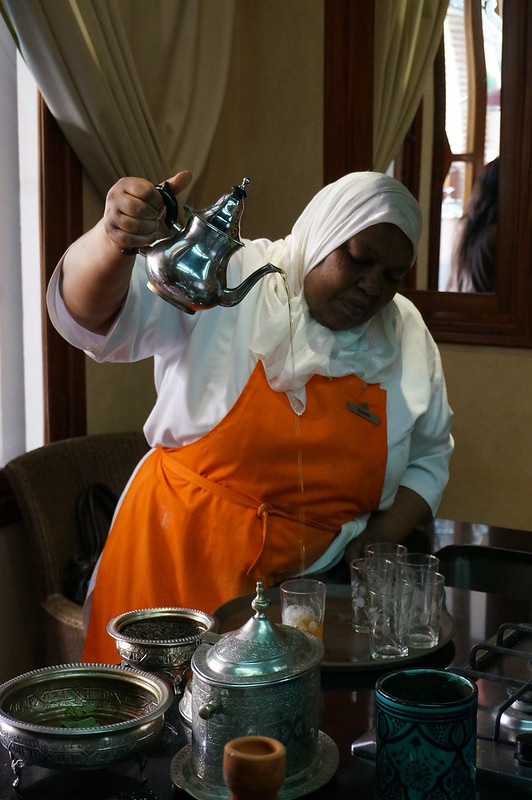 As a final gift and vote of confidence at the end of the class, we were presented with our own tagine dish and recipes from the class. Luckily for us, La Maison Arabe has allowed us to share some of those recipes with our readers.

Related Stories about travel and food in Morocco you might enjoy: A special thank you to La Maison Arabe who hosted us for this Moroccan cooking class – as always, our opinion remains our own.

Looks like so much fun. I love Moroccan food :D Looking at your pics makes me feel like Moroccan tonight!

Love this, pinning it for when we make a trip to Marrakech

It was a fantastic experience - I'm convinced you will have a great time. If you do go, let me know how it went. And let me know if you have questions - I'd be happy to help if I can.