Being new to Thailand and having just survived a few days in chaotic Bangkok, we were not sure what to expect when we arrived on the Island of Koh Chang.  The easiest way to get to Koh Chang is by taking an hour plane ride from Bangkok via Bangkok Air.  Our first surprise on this flight was the free sandwich.  Free food, seriously?  The second was the thatch roofed airport that looked more like a tropical lodge.  Ok, we thought, this will do.  Many wonderful surprises were in store, but nothing more amazing than spending the afternoon at the Elephant Camp. 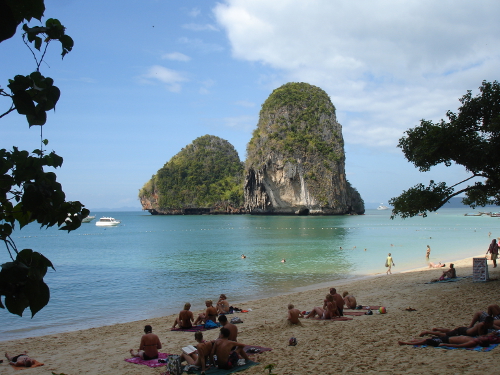 We had heard about the Elephant Camps in Thailand, which were given mixed reviews.  We heard a heart-breaking story about a camp that had a baby elephant last year.  They allowed so many tourists to pay to feed it that it became ill and died.  We also heard about owners that beat their elephants so that they could learn unnatural tricks, like painting with their trunks.  Nothing that we wanted to encourage or even to witness.  We spoke to the owner of our resort who introduced us to a camp (Baan Kwan Chang Elephant Camp) that rescued elephants from Northern Thailand.  He explained that each elephant had a “Mahout” or trainer for life that lived with it in the camp in the jungle for its entire life.  No elephant acts, just jungle rides to a pool where the elephant can take a swim in a cool pool and get scrubbed down by tourists with shower brushes.  We signed up for a visit the next day. 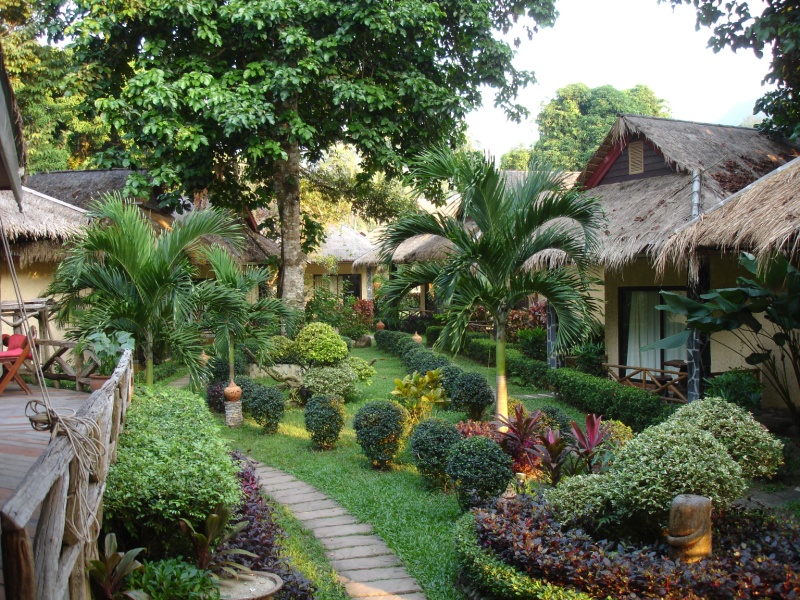 When we arrived at the camp there were elephants ambling in the periphery all being jockeyed by a barefooted Mahout.  As the group gathered some of the elephants came in to investigate as pineapple wedges were given to all of the guests.  I am the sort that tends to feed the dog from the table (if you have ever been to my house you would be immediately aware of this as evidenced by my poorly behaved dog around meal time).  I can tell you though that there is nothing subtle about elephants.  I brought an offering to the terrace railing and, with permission from the Mahout, offered up a slice.  The large trunk extended up, offer accepted.  Glee!

Feeding an elephant and riding it however, were two different things in my estimation.  Allow me at this moment to admit a fear of heights and a tendency to like to feel in control of situations.  Neither of these leanings, I was sure, were going to be well served on top of the elephant.  Despite my concerns and sweaty palms, I entered the “loading platform” and awkwardly climbed onto the bench atop the elephant.   While I adjusted to the situation I noted that Sean was not suffering the same anxiety and was instead grinning like a little boy.  Good for him.  Are we having fun yet? 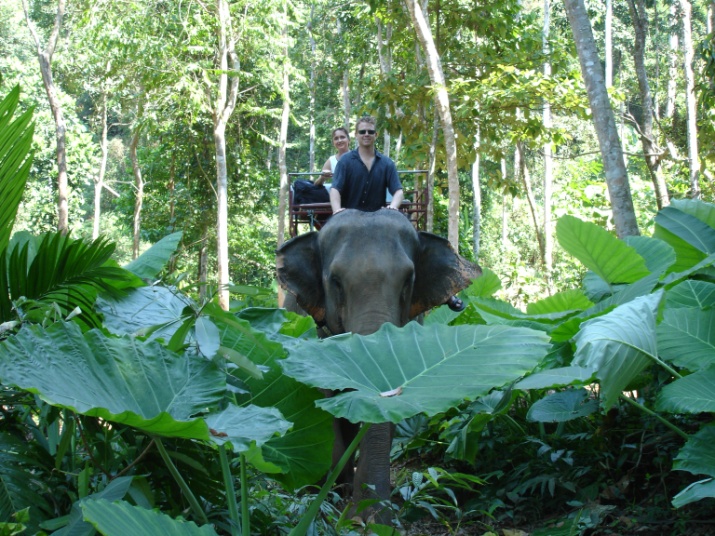 The first thing I noted was that the elephants skin felt like a football with bristles.  Our cheerful Mahout/Guide explained that the elephant’s skin was actually several inches thick and that carrying our weight was quite easy for him.  Luckily our chatty host was a wealth of information and listening to him served as a distraction from my anxiety.  With each step of the elephant we swung left and right and I tried to make little show of my glances around our “saddle” and concern about the potential for it slide off leaving us under one of dumbo’s massive feet.  The Mahout continuously tapped the elephants ears with his toes and explained that this was how he actually steered the elephant.  Tap on the right, turn right.  Tap on the left, turn left, etc.  We asked then why he carried a stick and he mentioned that at times this was needed to get the elephants attention, but that you don’t want to hit an elephant too much because then it would be an angry elephant, and “no one can control an angry elephant”.   Noted.

At this point our guide explained that the elephant that we were riding had been with them for 2 years, and that he was his trainer because he was the Mahout for all of the “naughty elephants.”  Hmmm.  At this point of our journey we aimed toward a muddy path that led downward toward the stream.  It was very steep and the elephant needed to walk with one foot in front of the other in order to navigate the path.  Kind of like an oversize ballerina wearing snow shoes down a slide.  Sensing my concern the Mahout explained that “elephants not like to fall down.”  I took this as somewhat good news.

We made it down the bank and my husband had a fantastic time jumping in the water and having a go at dumbo with the scrub brush.  Dumbo seemed to like it too, although that didn’t stop him from showing us how to use his trunk as a water cannon.  Good times!

We made it back to camp and the elephants lined up to accept bananas. “Elephant always hungry” we were told.   At that moment I learned that because elephants’ eyes are situated at the side of their head they have some difficulty seeing what is directly in front of them.  This resulted in a frenzy of trunks from these massive creatures greedily waving in front of me seeking out a snack.  It was surreal.  But fun. 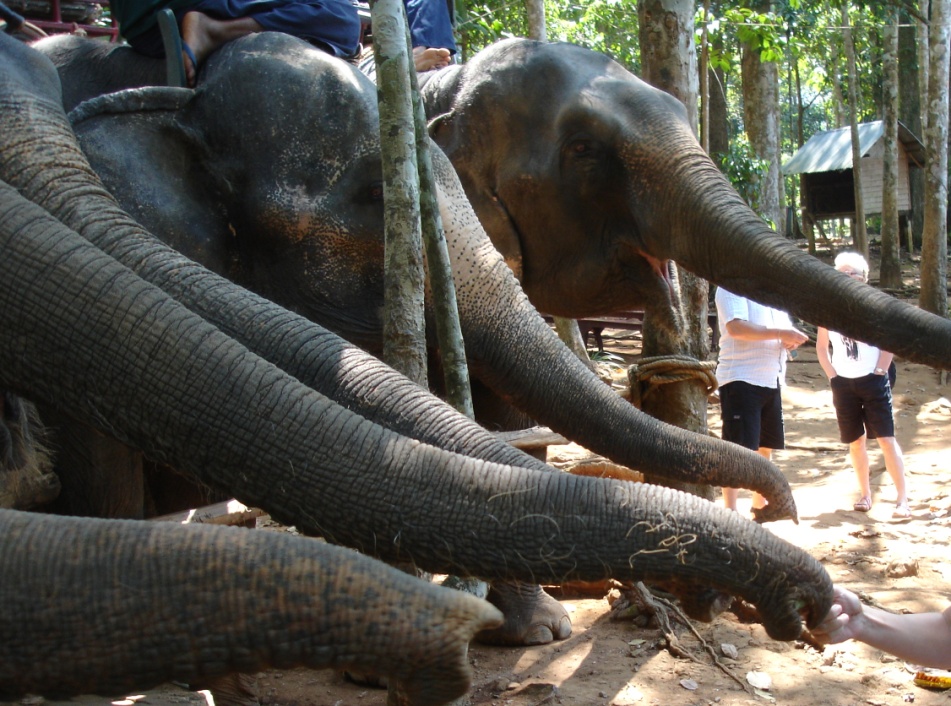 Koh Chang had many other surprises and was by far our favorite spot during our trip to Thailand.  Amazing beaches, fresh seafood, fire dancers, floating fishing villages and, of course, elephants.

For more information about where to stay and things to do in Koh Chang – check out this related article:

Koh Chang Thailand, Things to do and Where to Stay

Important note:  We have learned a great deal about the plight of elephants in Thailand since our first visit. We have done a lot of research and now wouldn’t recommend visiting camps unless you do your research about how they are treated. For more information, please read this article: Should You Ride Elephants in Thailand? It’s Complicated.

No time now? Pin it for later


Note: Some of the links on this page are affiliate links, which means that if you click on them or make a purchase, we receive a small referral fee. So click away. And thanks so much if you do, we appreciate the support!
Click here to cancel reply.

Just like you, I too am not in favour of the use of animals for entertaining people. Though Thailand is a country where elephants are highly revered, there are some with commercial objectives that make wrong use of them just to rake in some money. I want to request all who are visiting Thailand, that don’t get involved in any activity that requires the use of animals. They are better left the way the nature has made them.