Before heading to Budapest for the first time, I decided to track down a cooking class.

This wasn’t unusual in itself. It’s always a good way to learn about the culture and the food in a new place (and get great restaurant recommendations from the chef – they always know where to eat).

But in this situation I was all the more curious. Budapest has emerged from communist rule only within the last 25 years. What a huge transformation.

I was quite curious about what impact this was having on the culture and on the food. And as it turns out, quite a bit.

Let’s start with what I did know (this bit will not impress you). There’s Hungarian Paprika.

Growing up, there was always a jar of paprika in the spice cabinet that, as far as I could tell, didn’t taste like anything and was basically used to sprinkle on top of hard-boiled eggs to give them a little color.

Next, there’s Hungarian Goulash. My goulash knowledge consisted of  being on the receiving end of a serving spoonful courtesy of the lunch ladies in my grade school cafeteria.

It consisted of egg noodles of a pasty consistency that had been cooked down until they almost lost their shape, which were then covered with grey colored ground meat in a tomato sauce of some sort.

Communist cooking, I gathered, was not tasty stuff. But I was keeping an open mind. 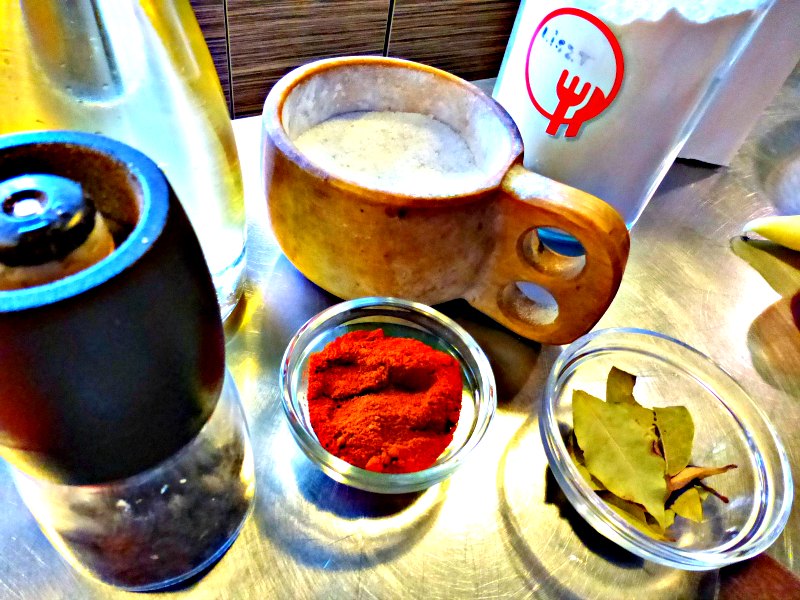 Before taking the cooking class I read that most of the dishes we were going to make involved the use of paprika (not a surprise since every shop, market and grocery store in Budapest was filled with the stuff).

Also that goulash might very likely be on the menu.

I knew that the school lunch lady version of the stuff was likely not the same thing that I would find here. As it turns out, I was right.

Sean and I signed up for a traditional cooking class with Chef Parade in Budapest. I quickly learned that the traditional class is just one of the types of cooking events that they do.

The kitchen was also filled with Asian ingredients for a Thai cooking class, and they even had a singles “speed dating” cooking night.

Food, over the last 25 years anyway, has returned to being something that is considered social, inventive and fun. Things have changed considerably.

Jen and another guest work the kitchen

Our instructor told us that during communist times homes were “restricted” to a few basic recipes. Part of the ideology was that everyone was the same, with equal status and access to resources.

Good communists were supposed to work hard and eat the same sort of staple foods. And, quantity of food was valued over the quality.

Therefore the flavors of the food and wine suffered tremendously under communist rule. Interesting, we were told that some older Hungarians look back fondly on this time because nobody was lacking for a job or food on the table.

The same is not true today.

The foods that we cooked in the class were staples to the traditional cuisine. It’s important to remember that the economic mover for Hungary until very recently was agriculture.

Foods are a bit heavy for a reason – a nice fresh green salad isn’t going to take you far along in your work day on the farm.

We started by preparing a hearty Hungarian potato and sausage soup . Typically made with lard (lard is a traditional base of a lot of the recipes here), but we went healthier with vegetable oil.

It was fun, throughout the day, chopping and cooking together while our chef/teacher told stories about life in Hungary, before and after the fall of the iron curtain.

And I’ll have to say our instructor couldn’t have been more forthcoming and welcoming. She often said “don’t be shy, taste things, I want to make you feel like you are in the kitchen with friends.” 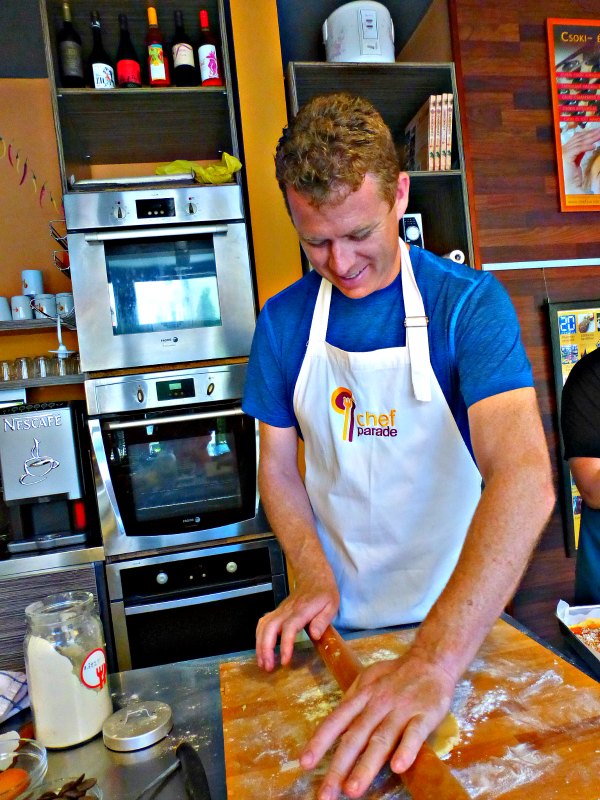 Sean doing his best to roll out the pastry dough

Early in the cooking process, we took a break and we were invited to jump in and try some Hungarian drinks. Our instructor certainly knew how to loosen things up. We tried several types of traditional liqueurs.

The most famous, an herbal liquor called Unicum, has been produced by the Zwack family using the same secret recipe since 1840.

The family went into exile during the communist period, and returned (with the recipe) after the fall to continue to produce what is one of Hungary’s national drinks.

You are supposed to drink it all in one shot and it is reputed to aid in digestion.

I don’t know about that, but it’s the kind of alcohol that would make you worried if someone decided to light up a cigarette close by after you slugged yours down. However, mission accomplished on loosening up the class. 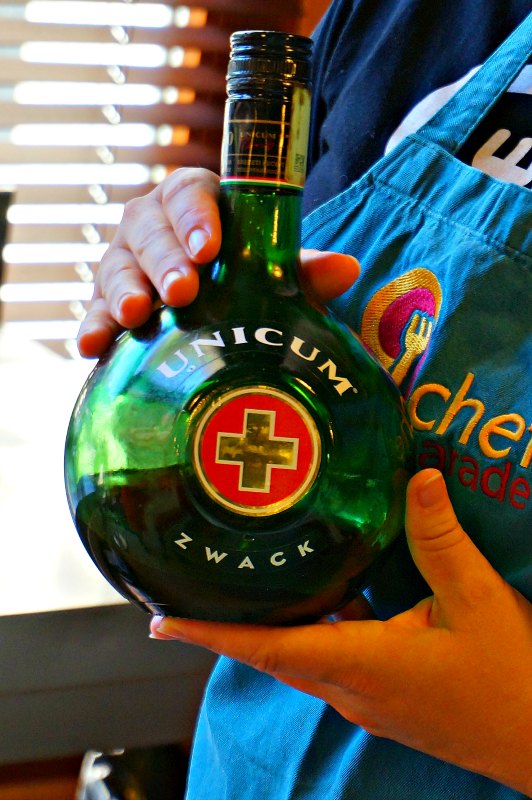 We also made a traditional layered dessert called Gerbeaud cake, that you see in every window shop. It involved making thin layers of pastry stacked up with layers of apricot jam, walnuts and slathered with chocolate.

This baked for about 45 minutes and needed to set for about an hour in the fridge before it was ready. 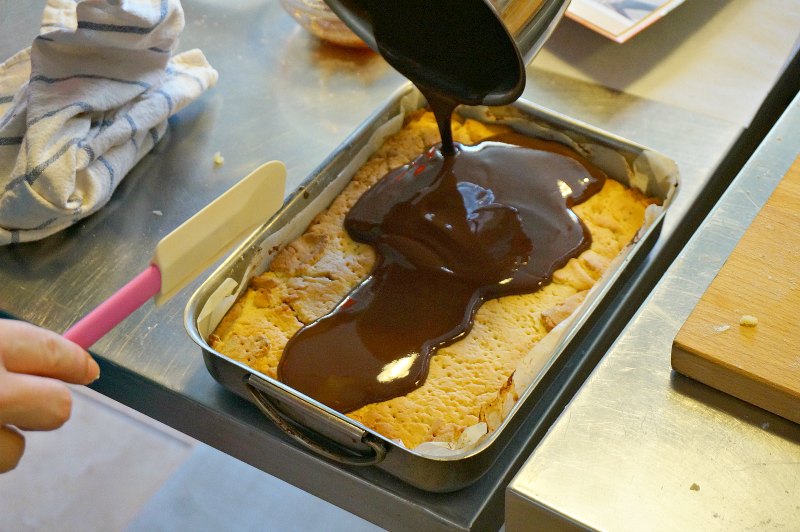 Pouring Chocolate onto the dessert

The main dish was a traditional chicken paprikash – something you see on every menu throughout the city. The version that we made involved making our own Hungarian dumplings, called nokedli, from scratch.

This required the “noodle master” to push the wet dough through a grater into a pot of boiling water – quite a goopy endeavor (I wonder if that’s why they have you take a swig of the liquor before taking this on). 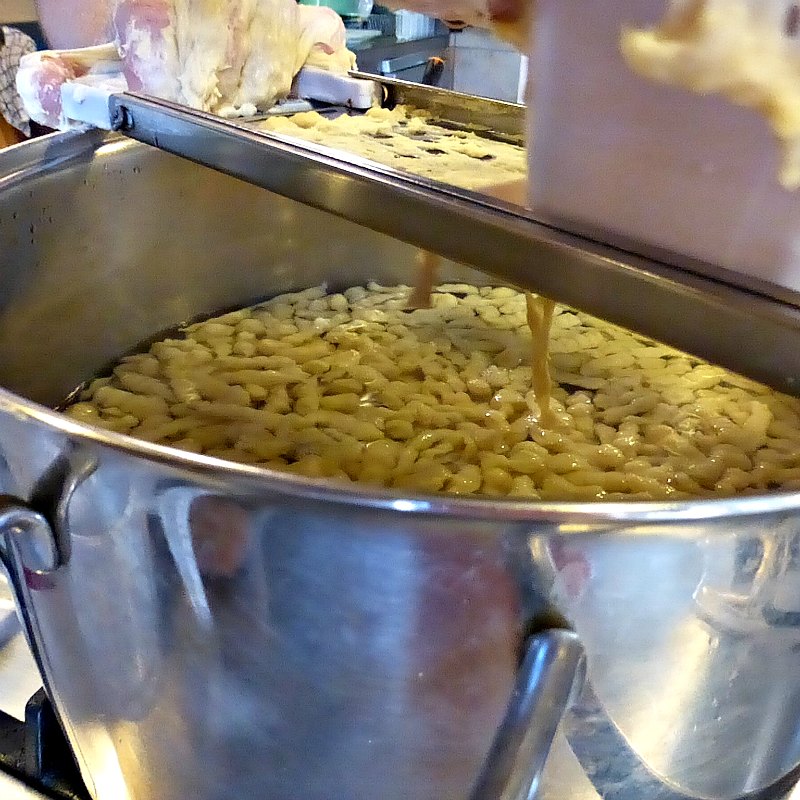 Labor of love – these little pasta nokedli dumplings started out pretty gooey, but the results…

Enjoying the Best Flavors of Hungary

The sauce was made with tomato, peppers, onions, combined with chicken legs and LOTS of sweet paprika. In Hungary, when in doubt, add more paprika, and then a little more just to be sure.

It was finished with sour cream mixed with – paprika. With a mixture of spicy paprika on the side.

Tube of intensified Paprika and a jar of hot paprika – that we used generously!

While everything simmered, we opened some bottles of wine and were guided through a wine tasting.

Hungarians understand beer but they love their wine and it shows. Under the “more is better” mindset of communism, grape production was combined and the resulting mediocre wine was doled out in plastic containers to the masses.

Now, boutique production has reemerged, and the results are wonderful. In Hungary, Rosé wine is particularly revered and if you have the opportunity you should sample some.

It’s not the sweet pink goo that some of us have gotten to know. This is refreshing and dry.

I can tell you that my understanding of paprika as a bland spice that adds no character to a dish has permanently changed. And who knew that Hungarian Goulash is actually more like a beef stew (with paprika of course)?

We found that the landscape of Hungarian cuisine is changing swiftly. So much so that even a vegetarian could come and survive here quite well.

It was great to start out our visit to Budapest by sitting in the kitchen and sharing stories and eating traditional foods so that we could begin to understand the roots of the culture.

From that vantage it was all the more interesting to experience how things in Hungary have changed. And we could see (and taste) it all around us.

Here are some additional articles and recipes from Budapest that you might enjoy:

Thank you to Chefparade Budapest who provided us with this class. Our opinions and story, as always, are our own. 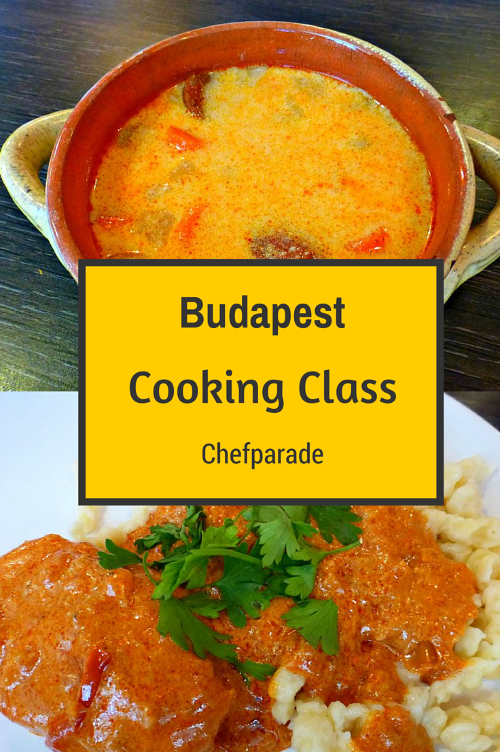 Hey!! Great article! I really enjoyed the class we shared!

Hi Julieta! Glad you liked it. We've made the Chicken Paprikash ourselves a couple of times!

I have yet to go to a cooking class while travelling, but I find it a great idea. It is also very "just", if you mess up, there's no point to complain :P

The food looks amazing! There is so much great food out there to try!

Oh my gosh, that looks delicious! I've never tried goulash before but I always thought it was a spicy dish, maybe because I knew it had a lot of paprika in it. I think I'll have to try a cooking class next time we travel internationally. My husband loves to cook, I think it would be a great experience!

@Christa, there are 3 types of paprika used in Hungarian cooking sweet, hot, and smoked. My wife’s parents were Hungarian and her mom could cook like no one I know. People in Hungary are like us some like spiced food some do not, her mom would use very little hot spices when cooking for the whole family and the people that like hot would add the heat on their own food. Great people and some of the best food I’ve ever had BTW I have learned over the years how to cook most of her recipes.