Everything about the Vatican is vast and impressive. As you step into St. Peter’s Square, the Basilica with its enormous dome takes center stage.

Massive statues of Jesus and the apostles that are perched on the facade are almost dwarfed by the columns fronting the basilica.

More enormous pillars, four deep, encircle and embrace all of St. Peter’s Square. The apostolic palace, the traditional residence of the pope, sits off to the side, but still towers above the square.

The architecture and the noise and excitement from the throngs of visitors filling the square are a feast for the senses.

The enormity of the outside is matched by the detail and ornateness of the interior. Even the current Pope, Frances, decided it was a little much for him.

He opted to reside in the guesthouse on the grounds rather than the apostolic palace – much more in the style of the former Franciscan priest.

One look inside the Vatican Museum will give no need for further explanation.

The long hallways are covered from floor to ceiling with colorful painting depicting images from history and the bible. 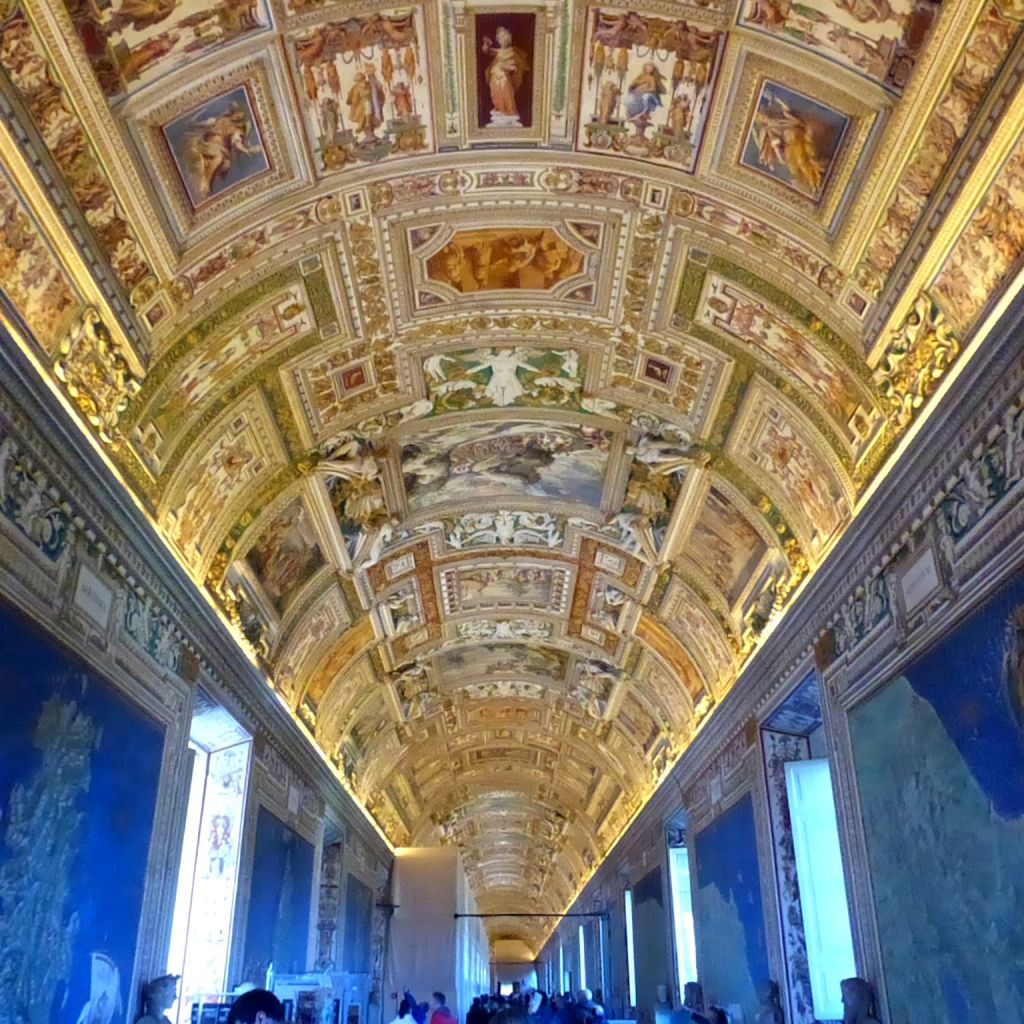 Seemingly endless hallway crowded with stunning images along the ceiling and walls.

Luckily much of it has been recently restored to reveal its original vibrant colors. 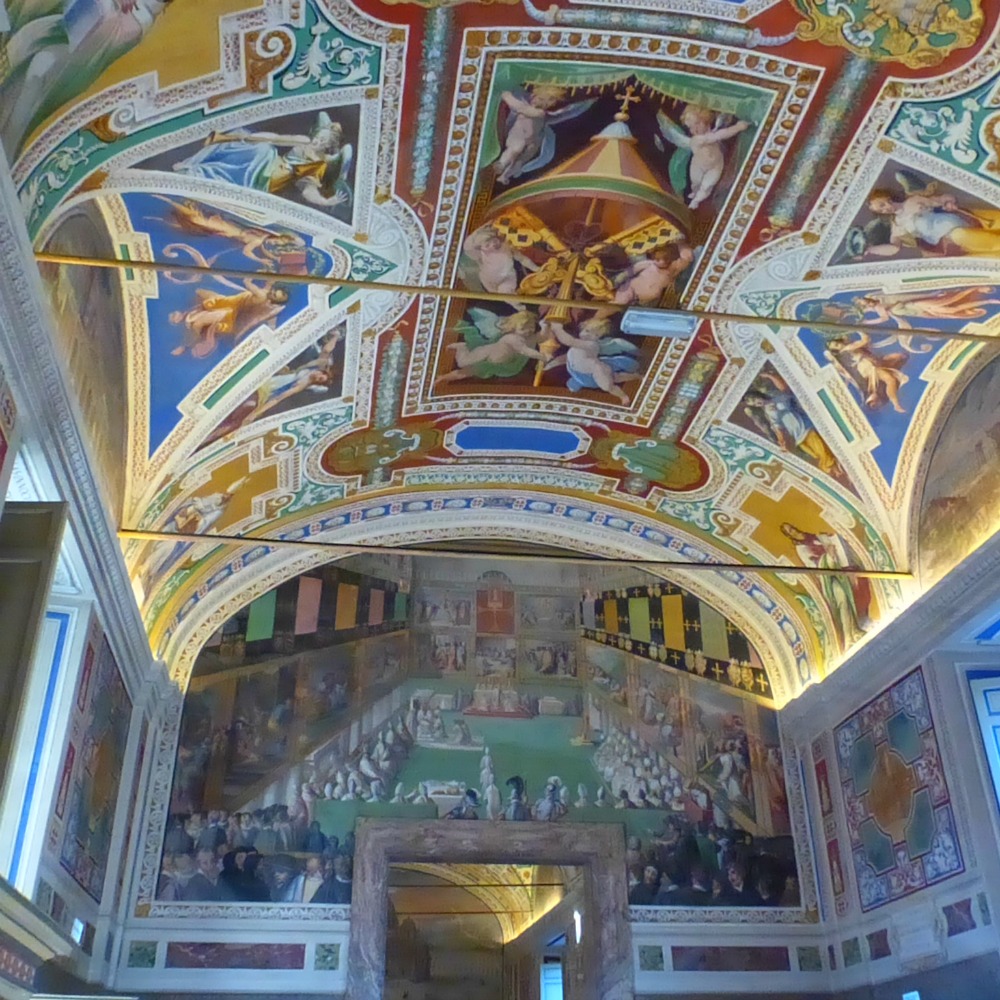 Every inch, floor to ceiling is a work of art

The mosaic floor in the building and courtyards are hundreds of years old and remain stunning. Sculptures from ancient Rome, to the Renaissance period, to much more modern works are evident everywhere. 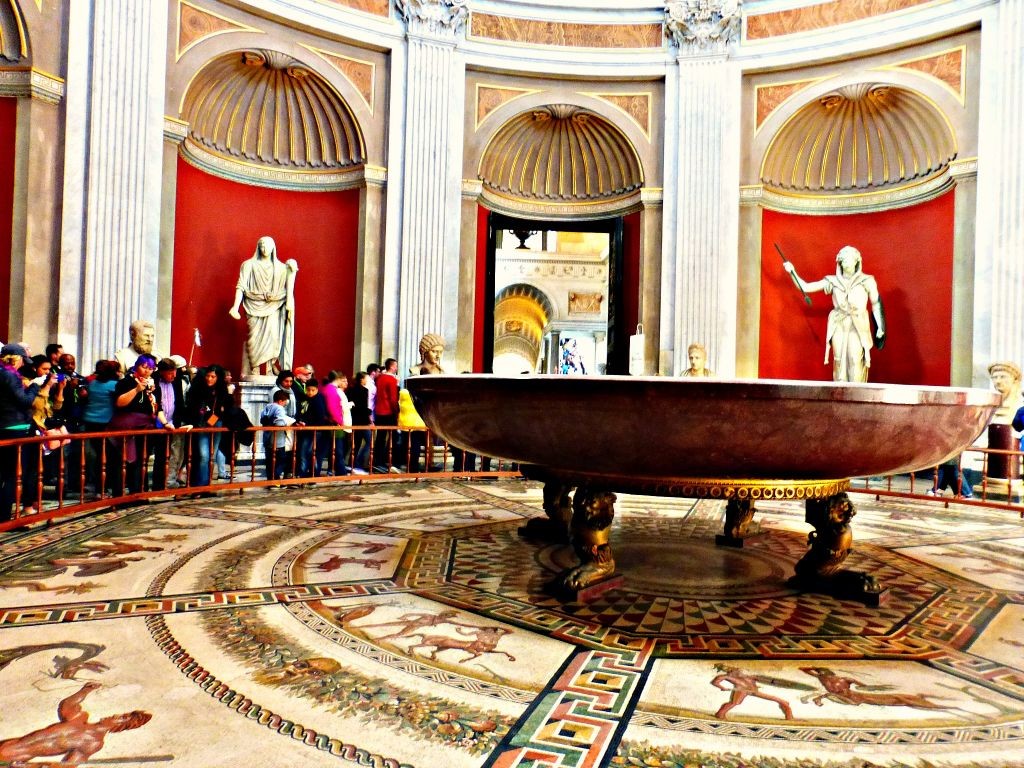 Every inch of the Vatican is decorated with paintings, sculptures or mosaics – almost more than the eye can take in.

One hall is covered with dozens of ornate tapestries. One particularly fascinating one had an image where the eyes appeared to follow us as we wandered past. 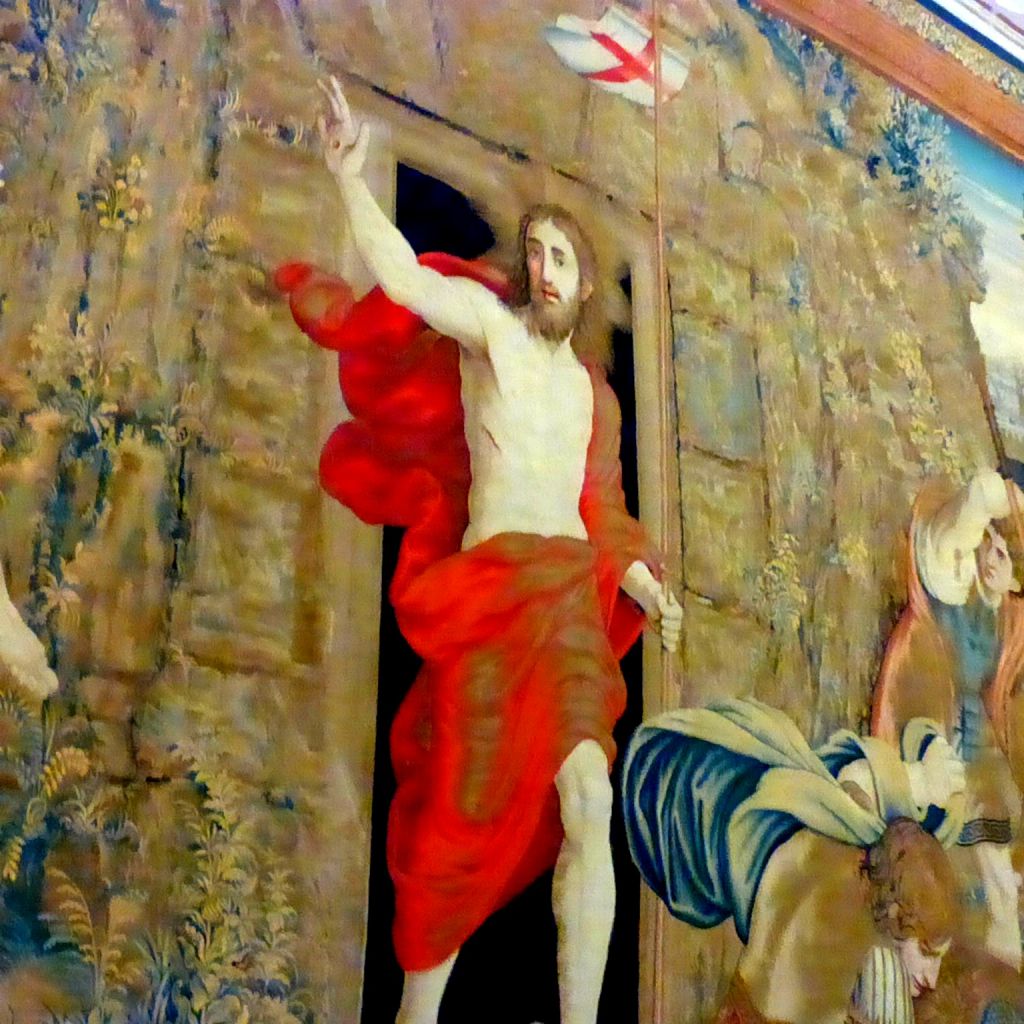 Jesus appears in the center of the tapestry and appears to watch you as you pass by.

The place is filled with gold leaf, statues and artifacts that the church has been amassing over the centuries. 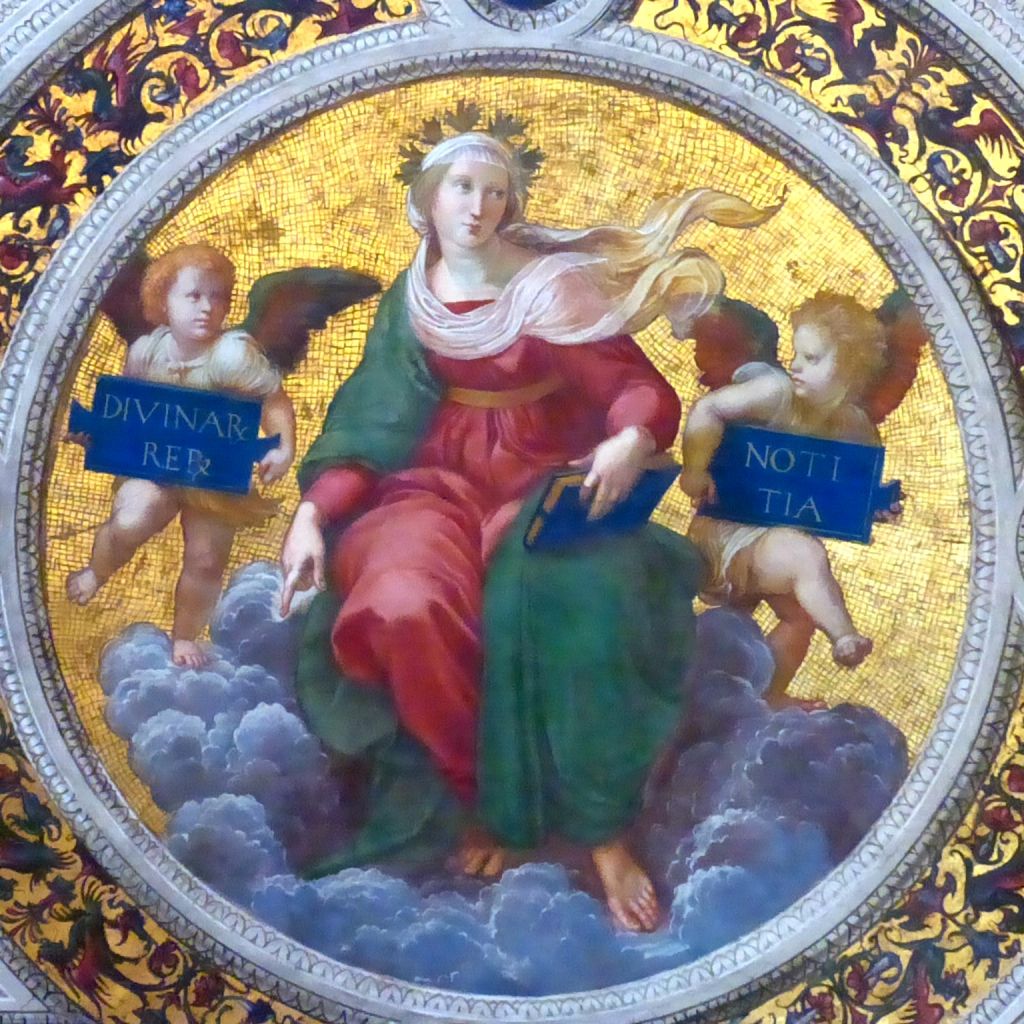 The interior courtyard is the home of iconic statues that inspired artists like Michelangelo during his time painting the Sistine chapel. 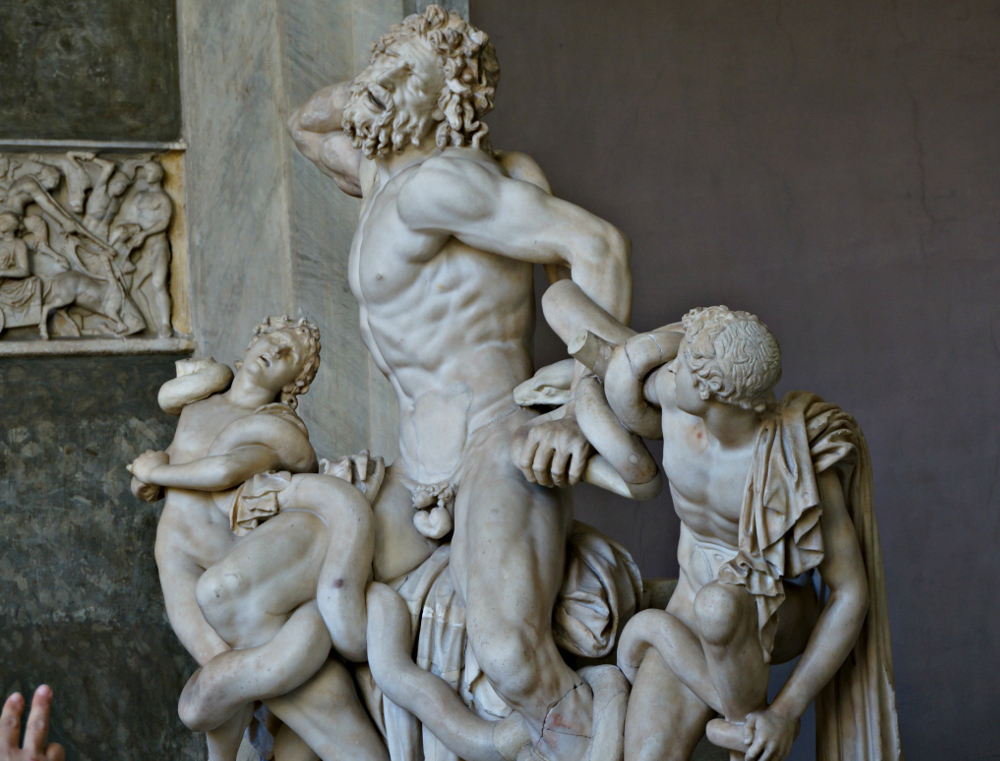 And visiting the Sistine Chapel itself is an experience that can leave you speechless (which is probably a good thing as you are not allowed to talk inside his sacred place).

Taking photos in the chapel itself isn’t allowed, but if you want a (perhaps dizzying) 360 degree virtual tour, the powers that be at the Vatican have made one available.

Apparently Michelangelo, who painted the ceiling and one interior wall all by himself in two 4- year stints, did so under protest.

He considered himself a sculptor who did not enjoy painting. But when the Pope asks you to paint, you paint. 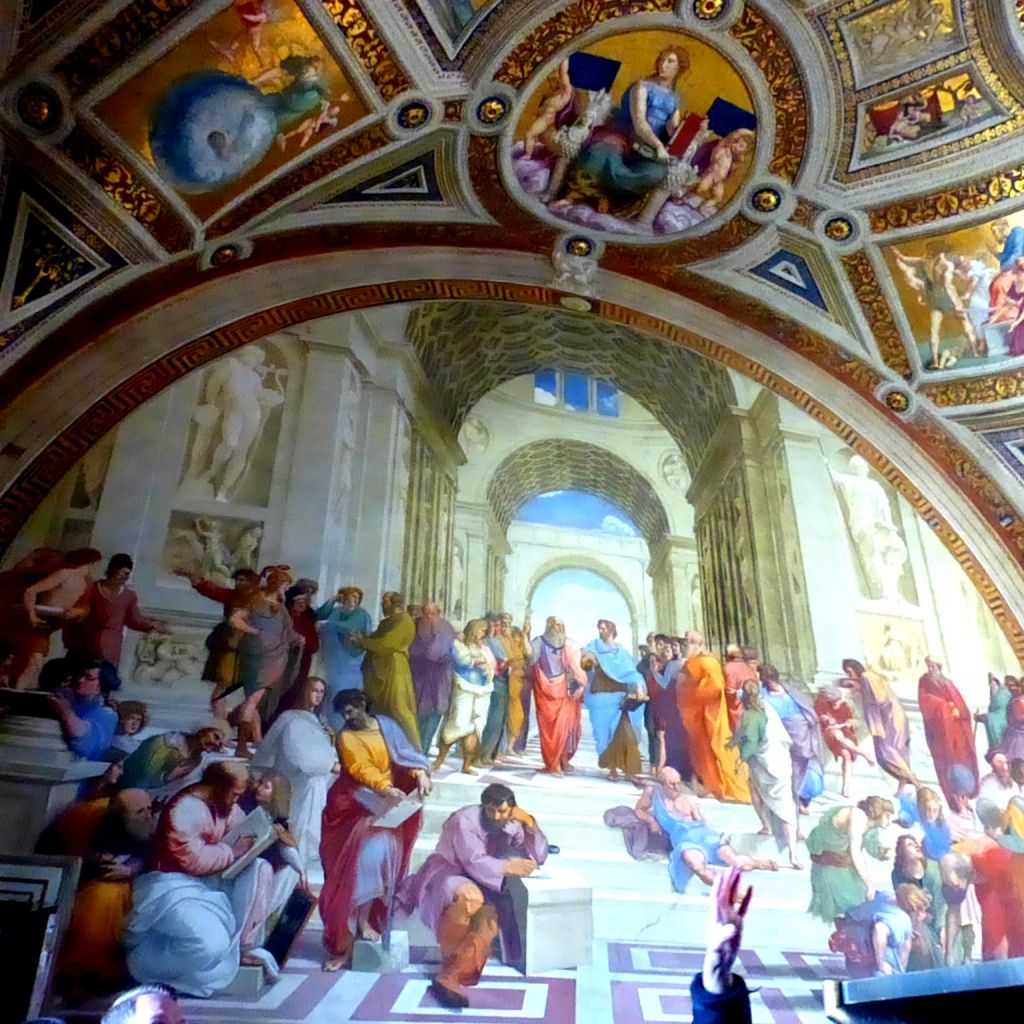 A painting decorating the former office of the Pop was completed by Michaelangelo’s rival, Rafael while he painted the Sistene Chapel

One of Michelangelo’s rivals, Raphael, was not such a reluctant painter. He completed the redecoration of the Papal offices while Michelangelo painted the ceiling of the Sistine Chapel.

Raphael’s passions extended beyond painting, and unfortunately resulted in his demise at age 37, allegedly due to complications from syphilis.

His amazing work of art lives on (along with a self-portrait that he worked into his painting on the Vatican wall along the way).

A few hours of wandering around the Vatican probably isn’t enough to really explore what is one of the largest and finest collections of the art in the world.

So how does a visitor take make the most of the art and history housed in this one place in just a few hours? We were very lucky to have been invited to take the Privileged Entrance Vatican Tour by The Roman Guy.

This included a tour of the Vatican Museums, Sistine Chapel and typically St. Peter’s Basilica. Unless, as while we were there, the Pope is using the Basilica to do a special mass.

We’d highly recommend taking a private tour – we were able to enter a full hour before the general public and therefore visit ahead of the serious crowds entered the building. 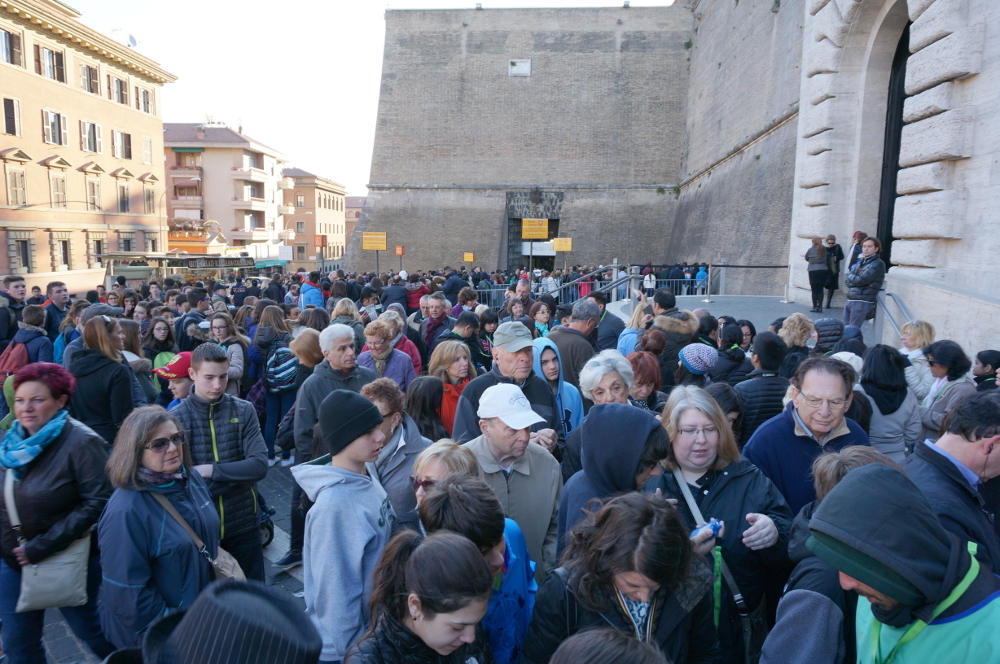 Crowds of people waiting to get in to see the Vatican

Our guide was also able to point us to all of the highlights throughout the museum, giving more meaning to our visit.

Otherwise, I’ll admit, the museum in its entirety can be overwhelming.

And, for a different view of the Vatican, come back to St. Peter’s Square after dark. We strolled through in the evening to take in the view minus the crowds, while it is bathed in light. Incredible! 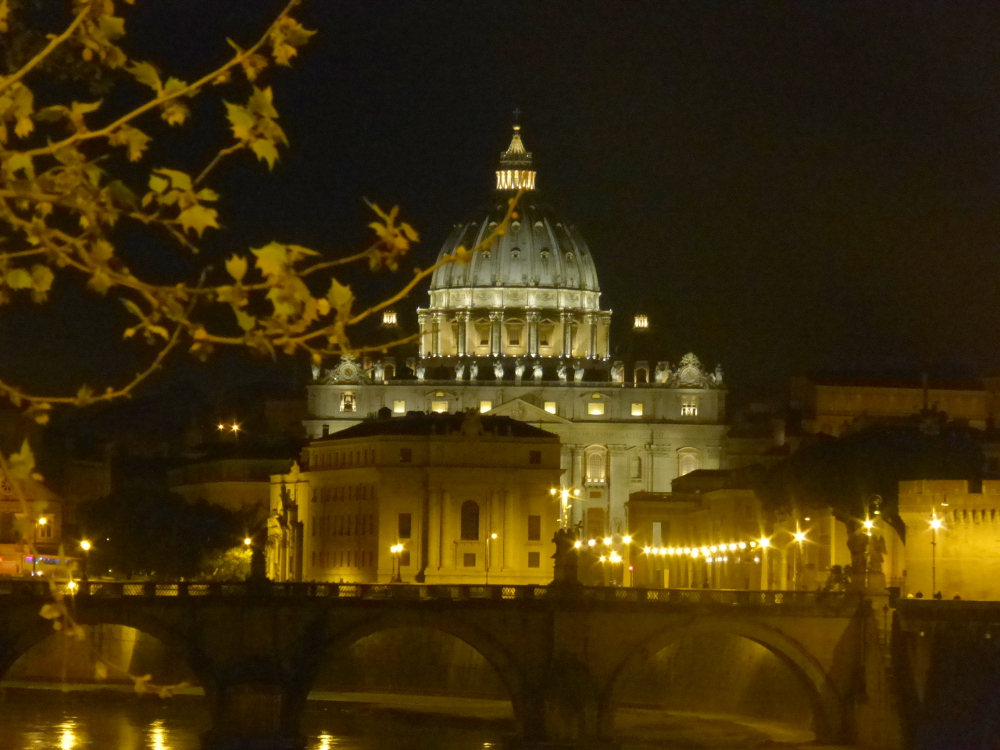 View of the Vatican at night from the Tiber River

Here are some additional articles about travel in Rome that you might enjoy! Thank you to The Roman Guy for providing us with the Privileged Entrance Tour of the Vatican. Our description and opinions, as always, remain our own.

We did the breakfast at the Vatican option off of their website (https://biglietteriamusei.vatican.va/musei/tickets/do?action=booking&codiceLivelloVisita=34&step=1) and had an audio guide and plenty of access before the public along with a great breakfast. We wanted to take our time and explore without a guide or to feel hurried. Not shabby for 65 euro 73$.

I am so, so fascinated by the Vatican! Do you know of any good books to read about it?

Danielle, I lived in Rome twice, so I thought I'd give my two cents. There is so much history and art it's hard to find one book. A great place to start is A Walk Through St Peters by Jeffrey Kirby. http://www.amazon.com/Jeffrey-Kirby-Encountering-Lord-Court/dp/B00SB5CGOO

Hi there, just wondering about the cost of the tour? It is a good way to beat the crowds, but when we visited Rome we found them hugely overpriced. It certainly is possible to enjoy the Vatican without a tour, but you're right, you do need plenty of time on your hands!

Hello Steph, Thanks for commenting. There is a link on the page that will bring your to the tour company's page in order to get a quote for the tour. $84 for adults at this point. I think that with every vacation you have to balance our your budget along with the quality of the experiences that you want to have. If you don't mind the crowds and have a lot of time waiting in line may be fine. But if you'd like to get in before the crowd and have someone there to explain what you are seeing and to answer your questions then it is well worth the price. Happy Travels!

Thank you for the post! I'd love to visit and hope to be lucky enough to do so one day!