It was over a year ago that my husband Sean and I sold our home, quit our jobs and began traveling full-time. We were thrilled with the prospects ahead of us but very naive about the events that lay ahead. And the consequences they would have on our relationship. But, let me back up a little here.

Before embarking on this journey we had been married for 14 years. We loved the life we built in Southern California with our comfortable house, private pool and little convertible car. What we didn’t love was how hard we had to work to maintain all of that stuff. Sean was traveling for his job up to 6 days a week, and I was working some weekends at my job. It was a hectic pace. To offset the stress we would plan elaborate vacations for up to a month at time – which is expensive.

The decision to ditch the life we had worked so hard to build didn’t happen overnight. We had a huge whiteboard in our office that we would use to sketch out plans. How much do we think we could live on? Would we be happy on that? Where would we go? Would we need to sell our house? Meanwhile the emotional questions began swirling around. Would we be happy living in small apartments and not having a home? What it be like to spend that much time together? And the biggest one – Would we be giving up everything we built together, and ultimately lose the thing that was most important to us – each other. Big gamble. But we jumped, and now, here we are.

We knew that traveling full-time would change us, and reflecting back now I’m surprised how quickly and how much. Driving away from the house for the last time felt like being a yo-yo tossed in the air after forgetting to tether the string to a finger. Out into the world with no way back.

We had sold all of our things. How did we acquire so much stuff? I learned that I actually owned 2 blenders when I finally penetrated the back of my pantry. Really? And plenty of clothes that didn’t fit, and that I really shouldn’t be caught dead wearing even if they did. It took several yard sales to divest ourselves of our stuff – some of it painfully so.

And now? I don’t miss any of it. I think sometimes I used to shop just to fill a void. The loneliness of missing Sean when he was away so much doesn’t exist anymore. And believe me, the desire to buy stuff can be easily cured by living out of a carry-on bag. I used to love to shop for things to bring home to remind me of my trips. Once I bought 6 french soup bowls that Sean carried all around France and Italy for me. On the train, off the train, on the bus, to the airport. I can’t even imagine that now.

Before we left I was worried that I would become resentful of not being able to buy things. Having “stuff” felt comfortable and I could afford all of the things I wanted. Now, I’ve swapped things for experiences and it was a good trade. We get to discover new places, restaurants, people, and cultures every day. I can’t put that in my suitcase but it does fill my mind and that is so much better.

And what would it be like to spend so much time together? What would we have to talk about now that we weren’t complaining about our busy schedules, raging against spending so much time fulfilling goals in our job descriptions that weren’t important to us or scheming away to start our new lives? With all of that noise gone what would be left? Turns out, quite a bit.

We travel from place to place after staying for about a month at a time. That gives us enough time to explore while at the same time having plenty of room for working, cooking for ourselves and – so important – doing laundry. But there is still a lot of planning for each move and learning to do when you live in a strange place and don’t know the language. It’s made us a better team. Because we’re sharing this experience we are very in tune with the challenges we face every day. And we celebrate our successes and forgive our errors because we make most of them together.

I’m not going to say that this life isn’t stressful. Consider the many times we end up in a strange place at an odd hour – a great way to save money is traveling on off times – but they are cheap for a reason! We’re tired, don’t know where we’re going, don’t know the language and are climbing into a cab with a broken meter (why is the meter always broken in cabs at the airport?). At these times it’s pretty easy to look at the only other person you know in the world and turn on them with a vengeance. And of course this helps no one and could lead to you being left on the sidewalk by yourself.

Here’s where rule #1 comes into play. After the before mentioned events have occurred during previous trips that we will not dwell on…..we came up with the rule that has saved us time and again. DON’T be a bitch. It works. And while violations still do occur, we’ve gotten pretty good at staying within bounds. And it really makes a difference.

The last gift in this life of travel has less to do with our life on the road, and more to do with the freedom it has given us having a location-independent life. My father became ill this year and we were able to go and spend several weeks with him before he finally lost his battle with cancer just after Thanksgiving. I don’t think that would have been possible if we were both working full-time to afford the things we gave up.

During those weeks I would sometimes look around for Sean, and find him sitting alone with my father, holding his hand. In those moments I experienced at the same time an unspeakable sadness for the man I was losing, and an enormous swelling of love for the man I had.

This year of travel has been profound in many ways. And it did destroy the marriage that I had – one with many nights of loneliness, filled with all kinds of material things, and yearning for something different. When we got married we said that our love for each other was our home. More than ever, I can say that this is true.

Sean – Love you with all my heart. 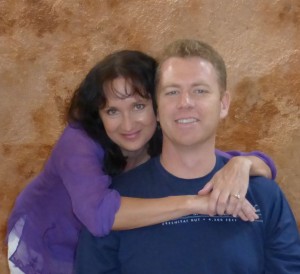 58 thoughts on “How Becoming Digital Nomads Destroyed My Marriage”