The two riverside cities of “Buda” and “Pest” were joined to make one large capital city in 1873. Despite that, most locals still refer to each side by its former name – the areas are, after all, very different.

Most travelers who venture to Budapest find accommodations on the Pest side of the Danube River, the side that is flat and more densely populated by hotels and restaurants.

There is plenty to see and do on the Pest side, but if you don’t venture across the Danube, to the hilly former Buda side, you’ll be missing quite a bit.

We decided to take a stroll over and try to find our way up to the Budapest Liberty Statue. The huge memorial of a woman holding a feather high above her head beckoned us from on top of the hill to come on over for a closer look.

We started the hike at the Chain bridge from the Pest side. Not because this was the way we were going to cross the river, just because, well, it’s just plain fun to look at, especially the stone lions guarding the bridge. 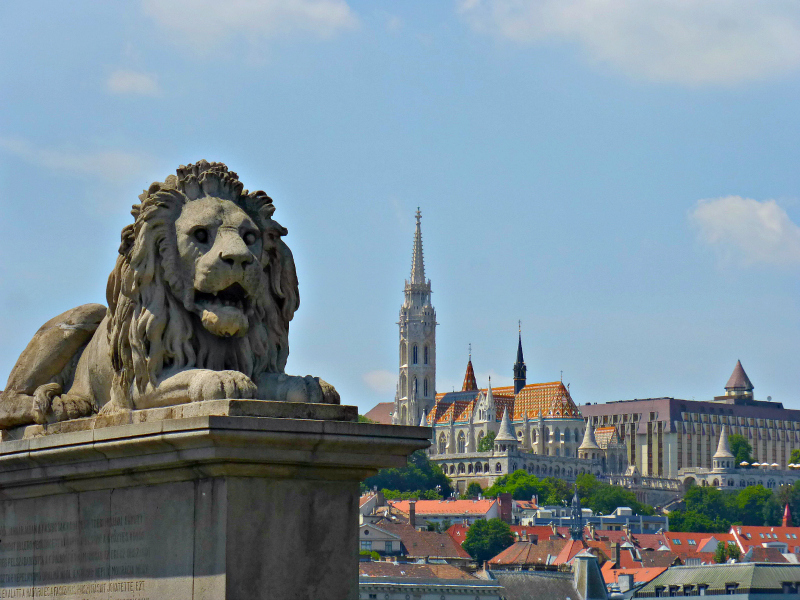 We made our way on along the path toward the Elisabeth Bridge to cross the river. There are several whimsical statues that greeted us along the way, including this sprite with a view of the Buda Castle over her shoulder.

Titled “The Little Princess” this figure is actually one of the most photographed sights in Budapest. 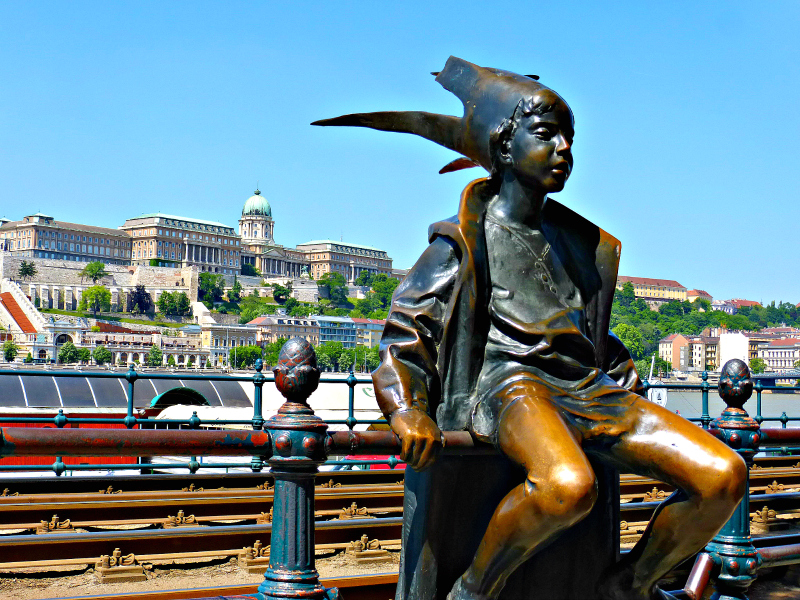 After crossing the bridge we came to a set of stairs heading directly to the statue of Gellért Hill, which sits about halfway up the hill. 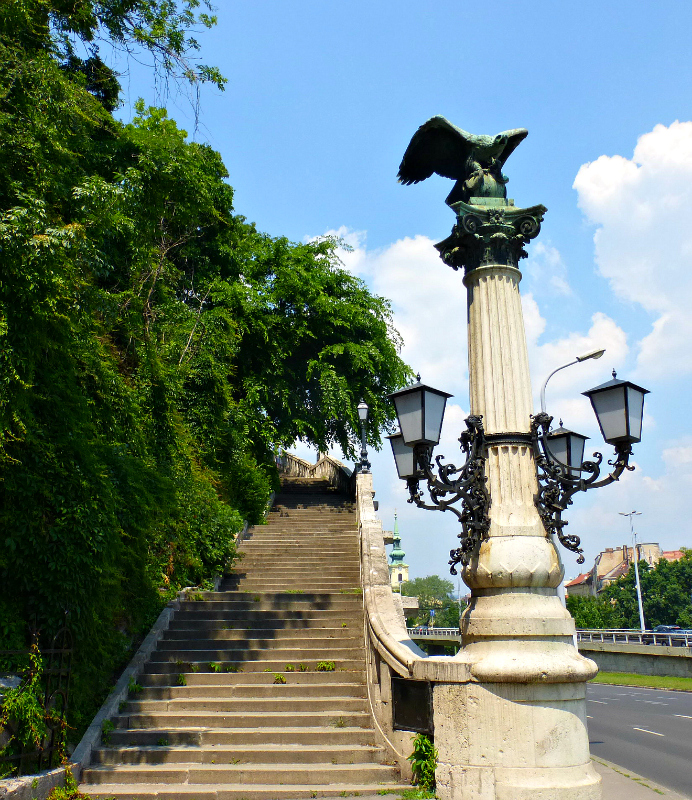 Stairway heading up the hill 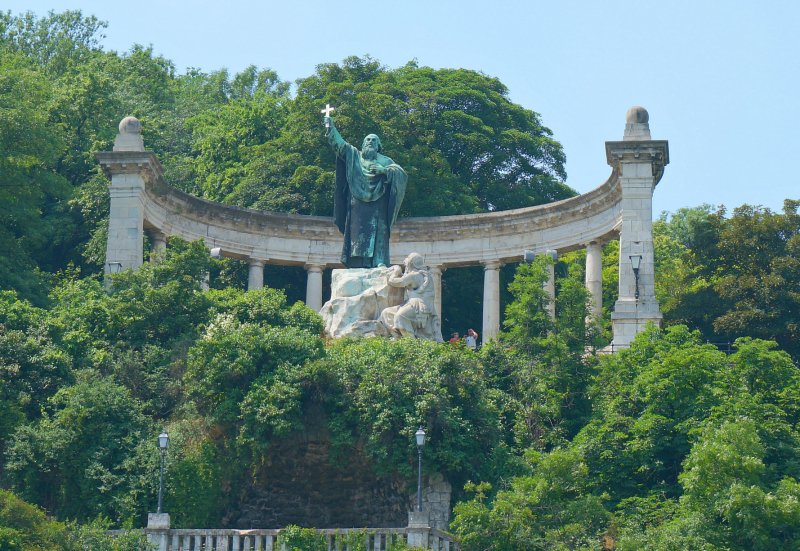 Here is where the unfortunate “tumble down the hill” part of our story enters. Gellért was the Benedictine Abbot of San Giorgio Maggiore in Venice.

He was asked by King Stephen to come to Buda to assist him in his efforts to convert the Pagan citizens to Christianity. After the death of King Steven the Pagans revolted and, in 1046, assassinated Gellért by rolling him down the hill in a barrel full of nails.

Gellert was later declared a saint and the hill where he met his demise was named Gellert-hegy in his honor. I couldn’t help but think about this story as Sean scaled down a steep embankment with his camera in hand, in order to get a picture of the statue from a different angle.

Luckily, no tumbling occurred in the process of taking this shot. 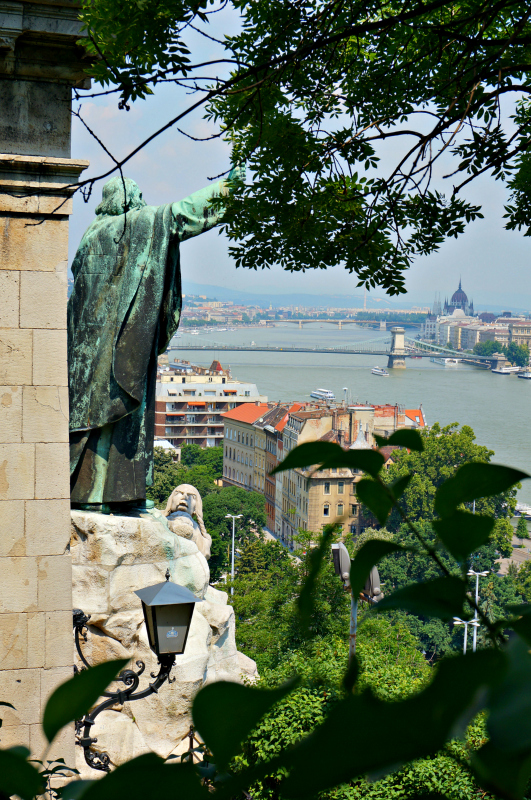 St. Gellért perched firmly on top of his hill

After getting our picture and making it back to the path we headed off up further up the hill toward Budapest’s Statue of Liberty, following the steep winding trail ever upwards. 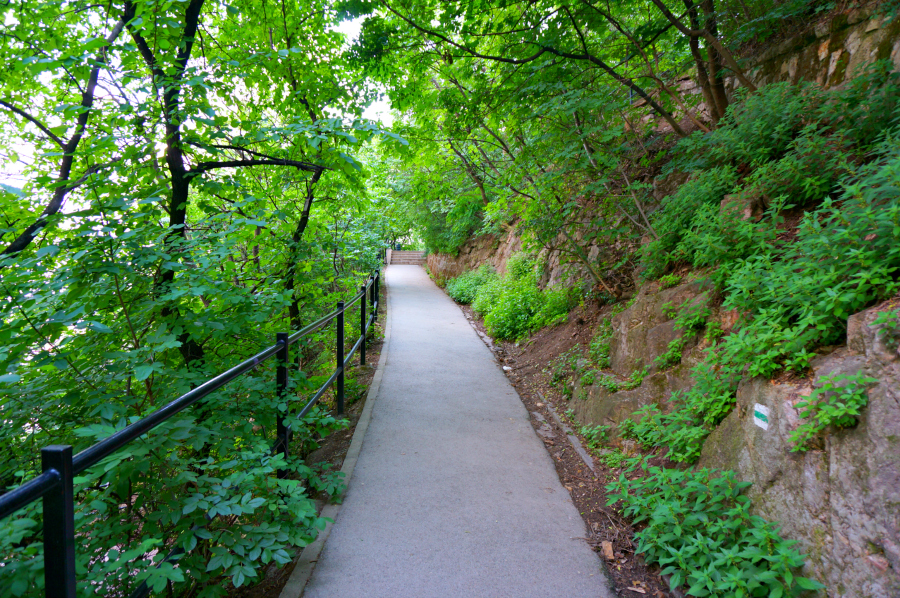 We were rewarded by some amazing views of the Pest side of the city, that just got better and better along the way. 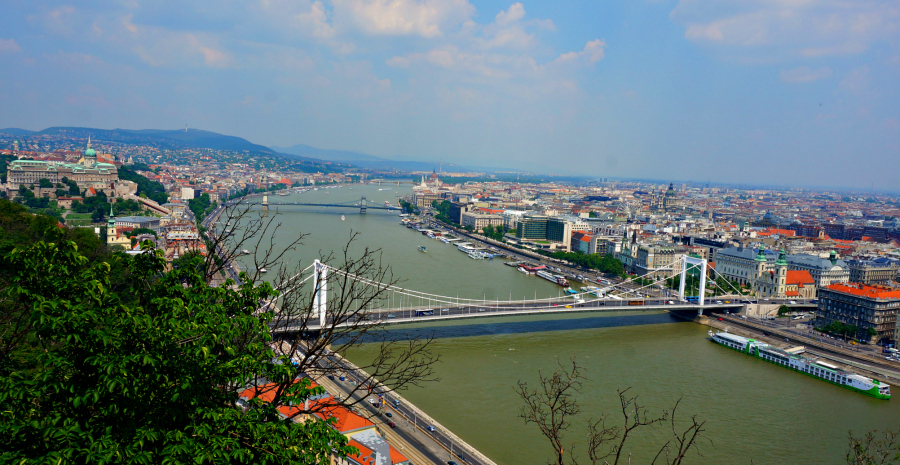 View of the Danube

It didn’t take long before we reached the top of the hill, and found the enormous statue.

Her arms. bearing a feather, stretched high above her head, with this inscription (in Hungarian) at her feet:  “To the memory of those all who sacrificed their lives for the independence, freedom, and prosperity of Hungary.” 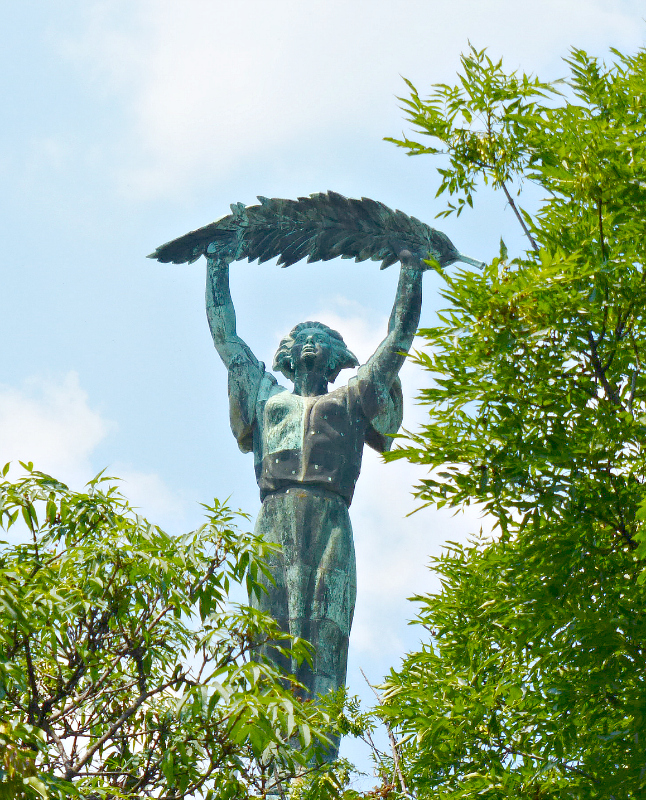 But there’s a funny story about this monument. It was actually placed on the hill by the Russians in 1947 as a gesture of celebration for their liberation of Hungary from Germany in WWII.

But after “liberating” Hungary, the Russians forgot to leave, for a good 40 years. The statue is one of the only monuments left in a place of honor commemorating the event.

The other monuments, like Russia itself, have been ushered out. You can still see the statues commemorating Communism lumped together in their new location on Momento Park.

We hiked down the hill and took advantage of our position across from Pest to take in the view from the Buda Castle. 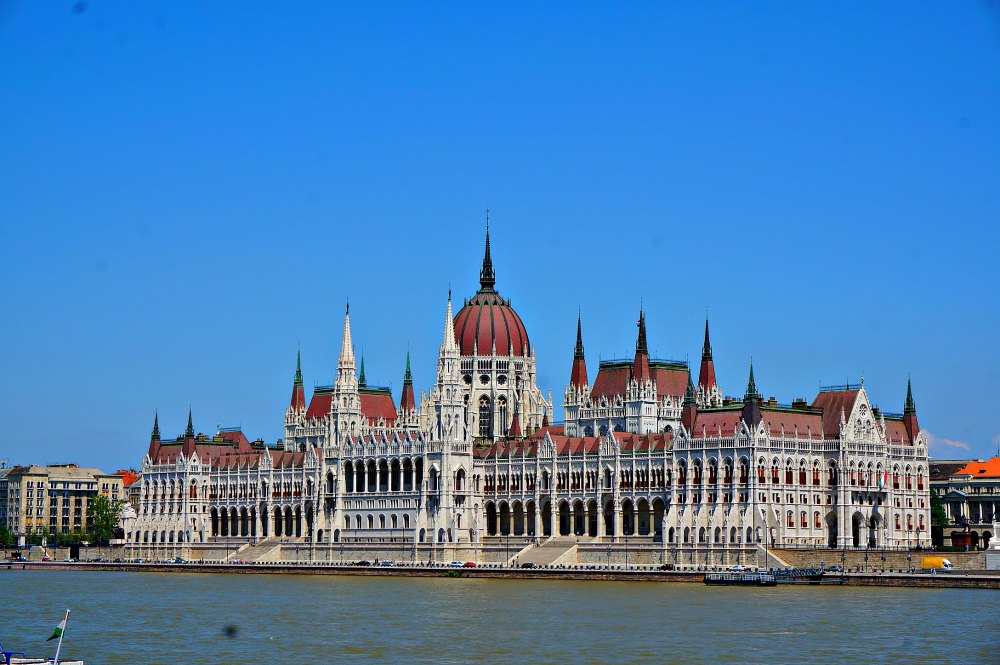 We enjoyed it so much that we made a trek back, to take in the views from Buda at night. As with everything we did that day, we were well rewarded for our efforts. 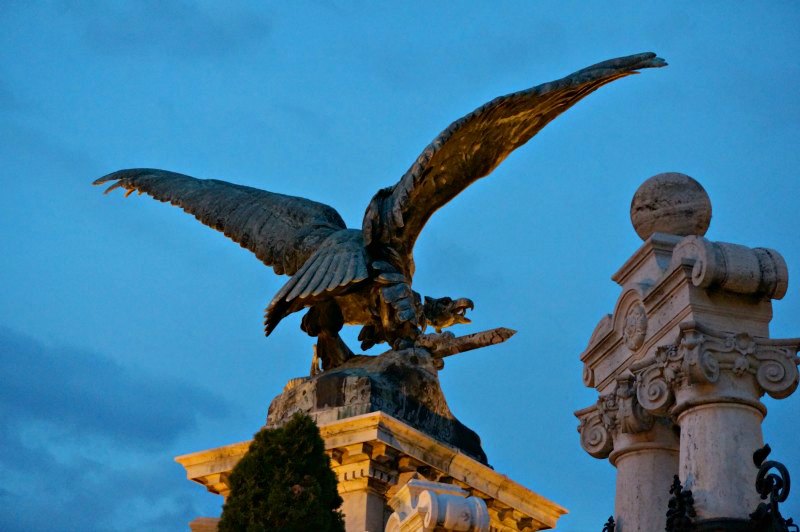 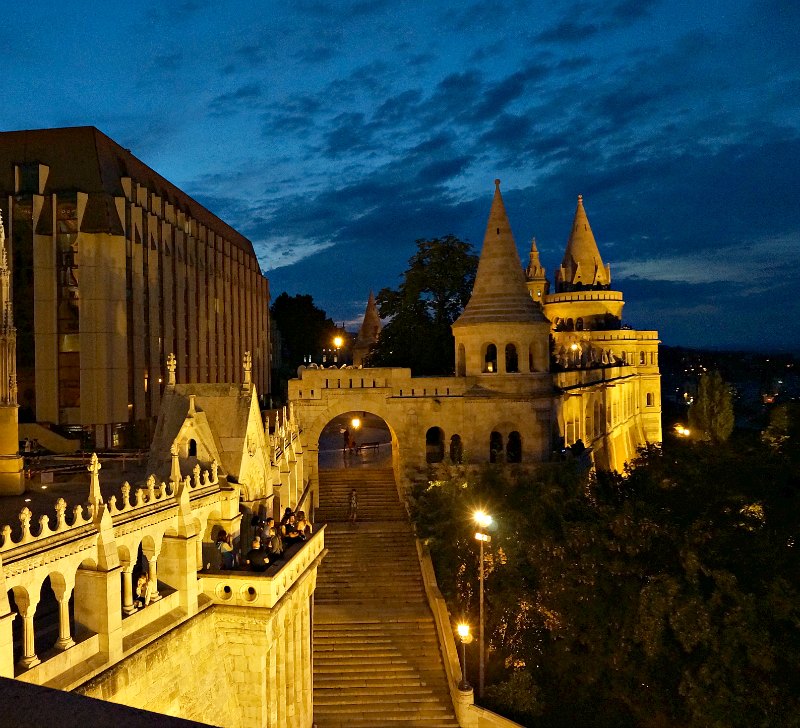 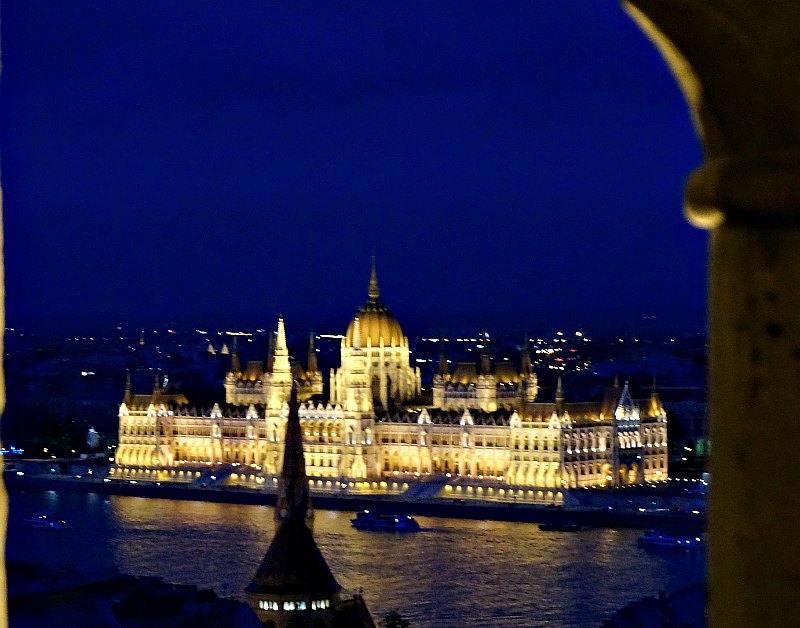 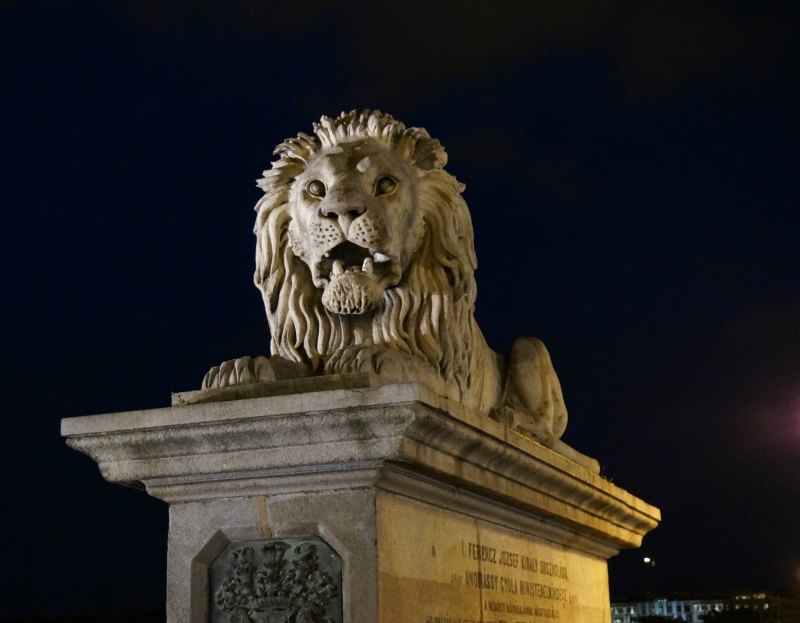 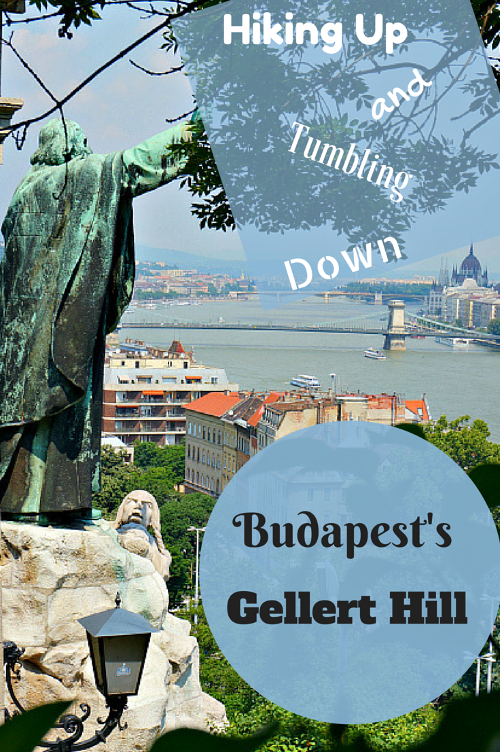 Here are some additional articles and recipes from Budapest that you might enjoy:

Love the lions! I actually am on the lookout every place I travel for lion statues! Your photos are beautiful, especially the Budapest Parliament at Night photo. A barrel full of nails--yikes!

Great post! Budapest was my last trip before moving to China and I loved it so much - the food was incredible!!

So much we didn't know about Budapest!! Gellert Hill looks like a great place to visit and we're glad there was no tumbling on your part! :)

My favourite city in the world! I learnt something new here and looking forward to returning to this wonderfully underrated city!

Wow this was so cool to read about. I never even knew this existed! Now I want to go! :)