Have you ever eaten in a Brazilian steakhouse (referred to as a Churrascaria in Brazil)? I’ve been to several and there are a few typical features. I thought I understood what they were all about, until I actually went to one in Brazil. But why should that have been a surprise?

The Churrascaria Palace in the Copacabana Beach area of Rio de Janeiro had some things that I expected. If you’ve been to a Brazilian steakhouse you are familiar with the skewers of meat with assorted cuts of meat. The waiter will slice off a small piece for you to savor and then soon after, the next guy comes along. In other places there is some sort of signal on the table, like a little block of wood painted red on one side (for “Dear Lord stop, I can’t eat any more”) or green – for “Yes, oh yes, keep it coming”. There was no signal at this restaurant – it was all “Yes, oh yes.” 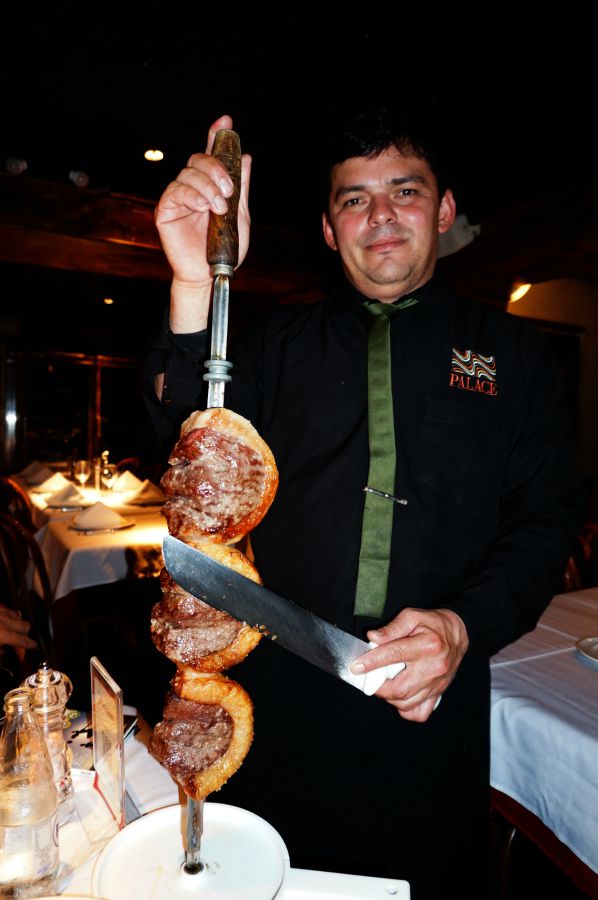 Waiter arriving with another skewer

This place can turn you into your own worst enemy. The waiters come along like a continuous wave of temptation. I told myself that I would start becoming more selective but each time another skewer was extended I offered by plate and gave a submissive nod in reply. Restraint has never been one of my strong suits. And then there is the expansive buffet with everything from seafood and salads to Italian prosciutto to a selection of gourmet cheeses. It’s easy to get stuffed quickly – but our host swore that if you take a break from eating and enjoy some pistachio nuts and some Parmesan cheese, your appetite comes back. And you will need it – there are more temptations to come. 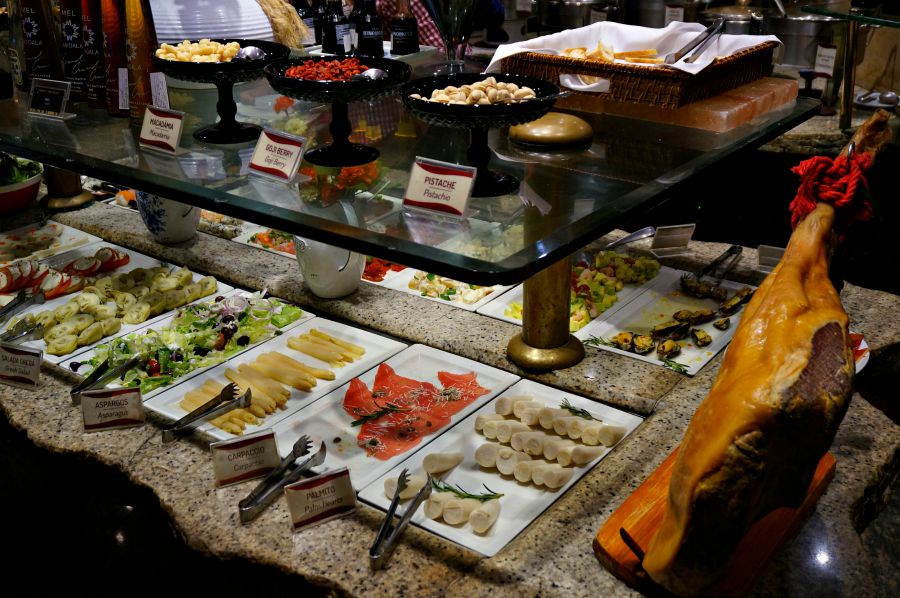 A look at ONE of the buffet tables 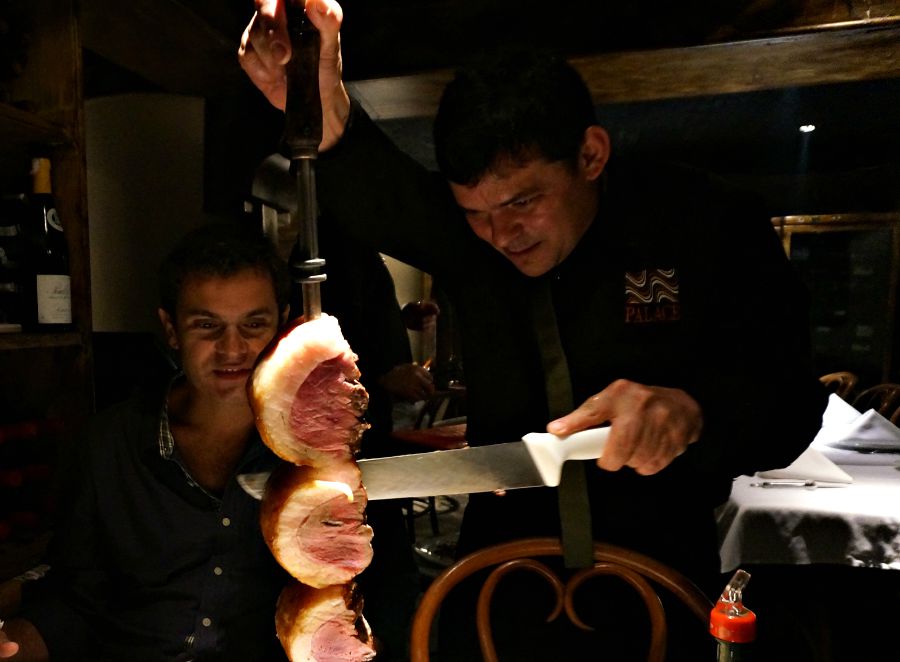 In this steakhouse, wonderful samples continue to parade onto your plate

This seafood platter was the first to arrive, followed closely by mini-chorizo (sausage) links. 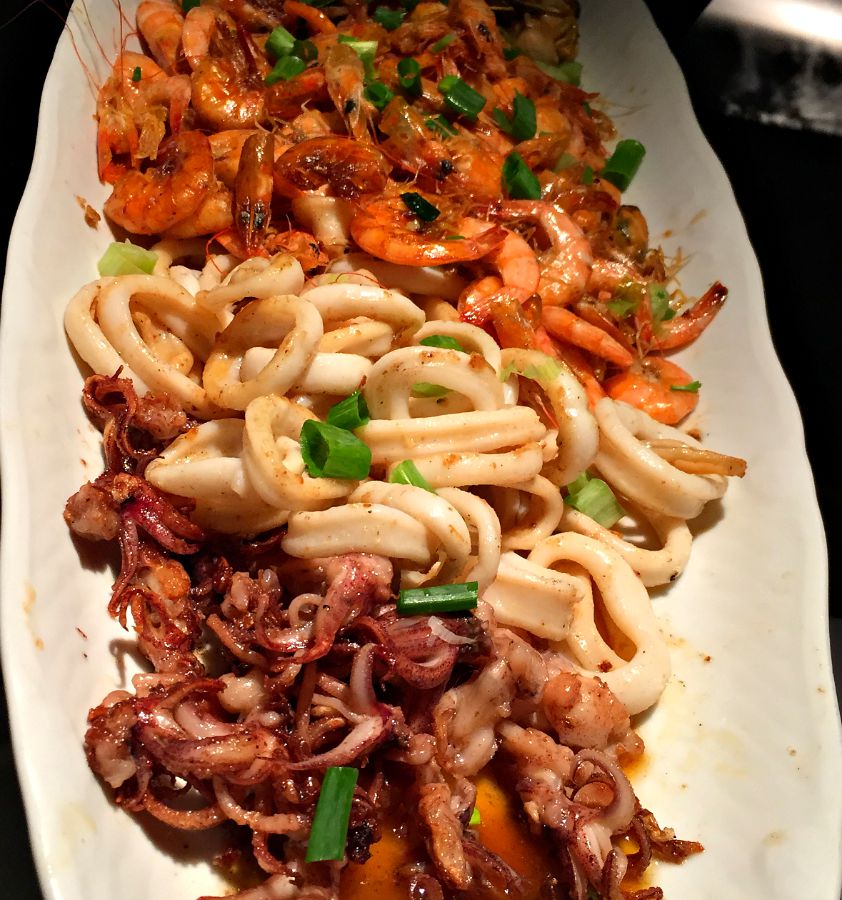 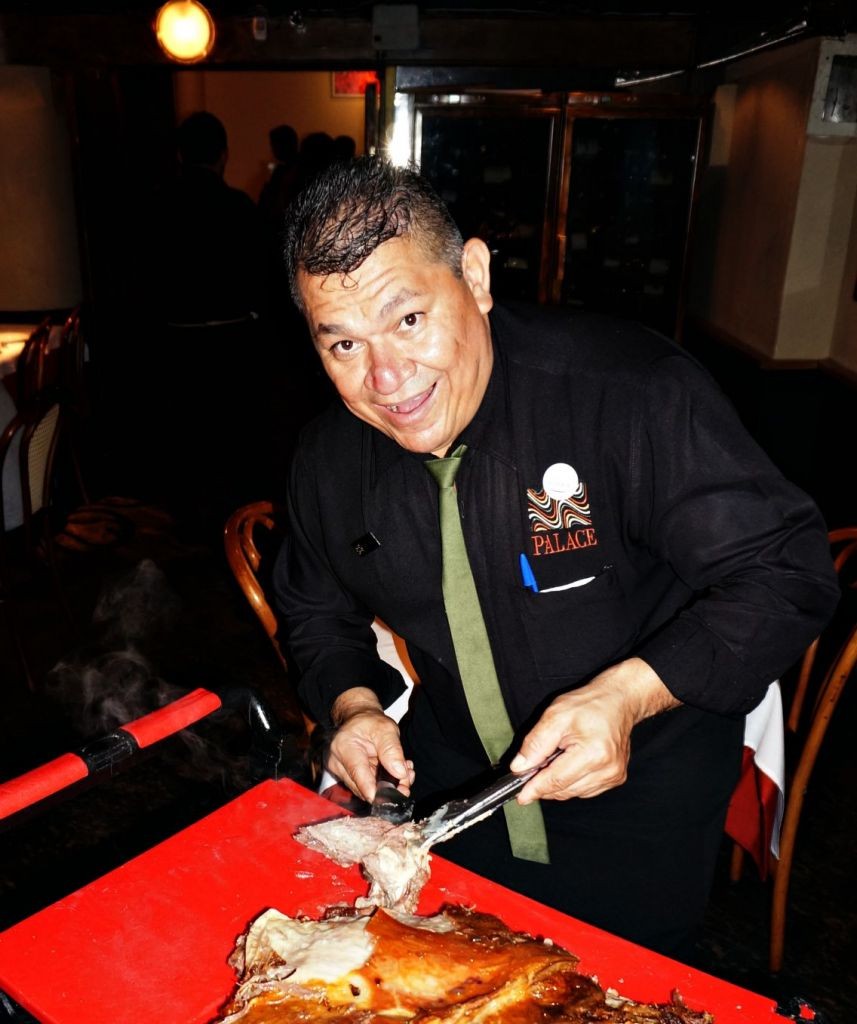 How could you say “no” to this face?

The staff here are part of the reason that this place is so special. They are very attentive and take your enjoyment of the experience personally. Some of them have worked in the restaurant for over sixteen years. The Palace’s place as one of the top restaurants in Brazil is a point of honor. 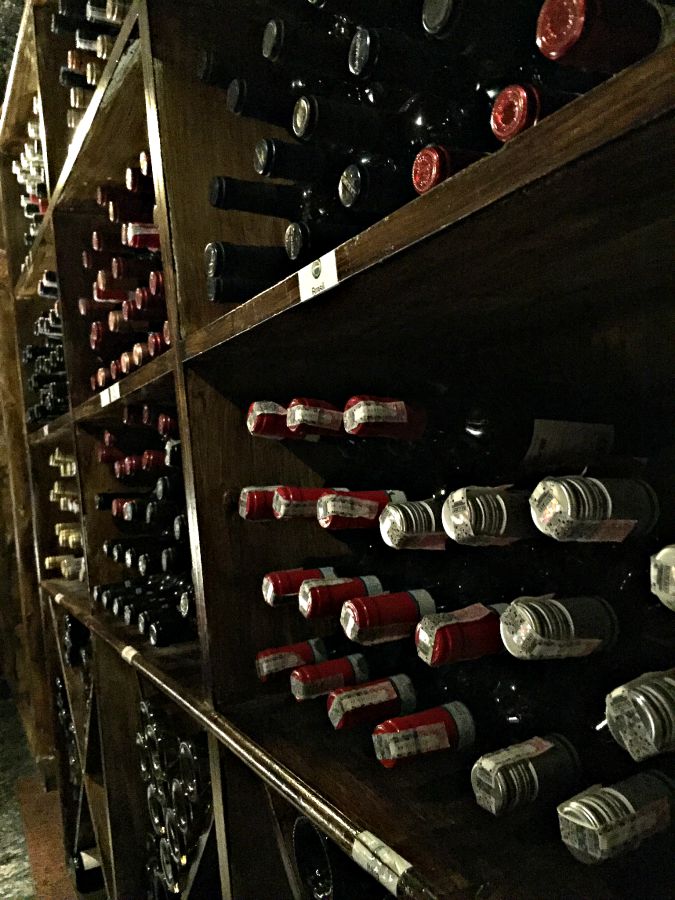 And in an addition to the regular buffet, during the time we were there the restaurant was featuring a “festival” of classic Brazilian recipes, such as Moqueca, seafood stew

There were even some non-traditional items: 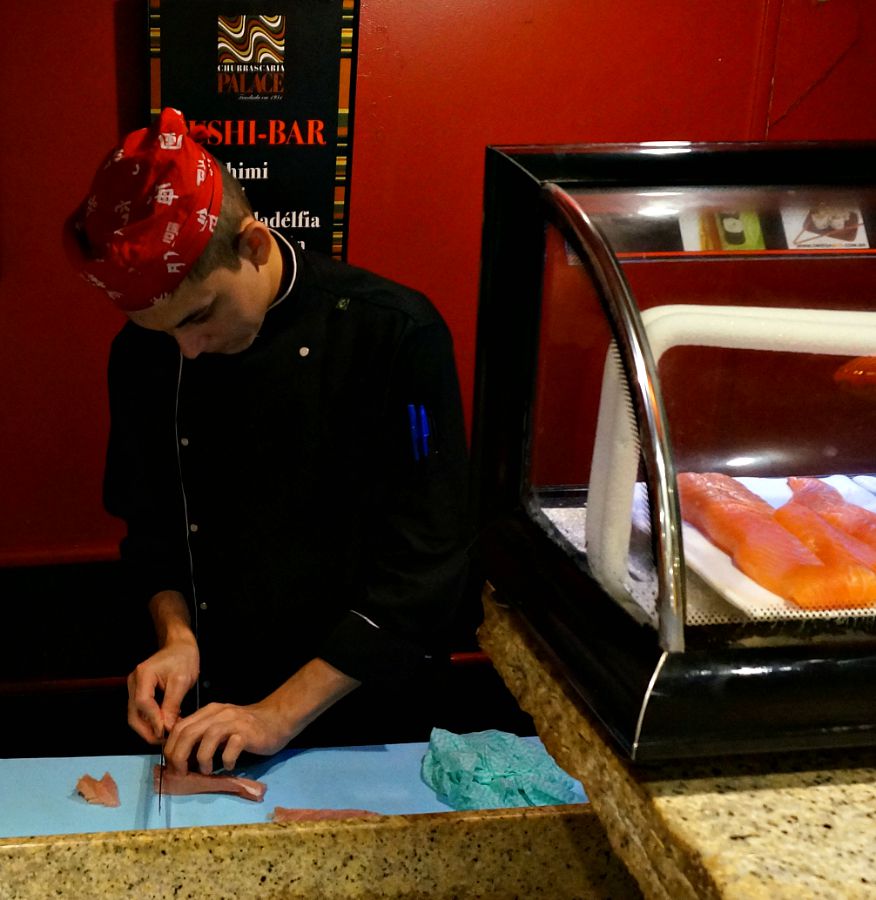 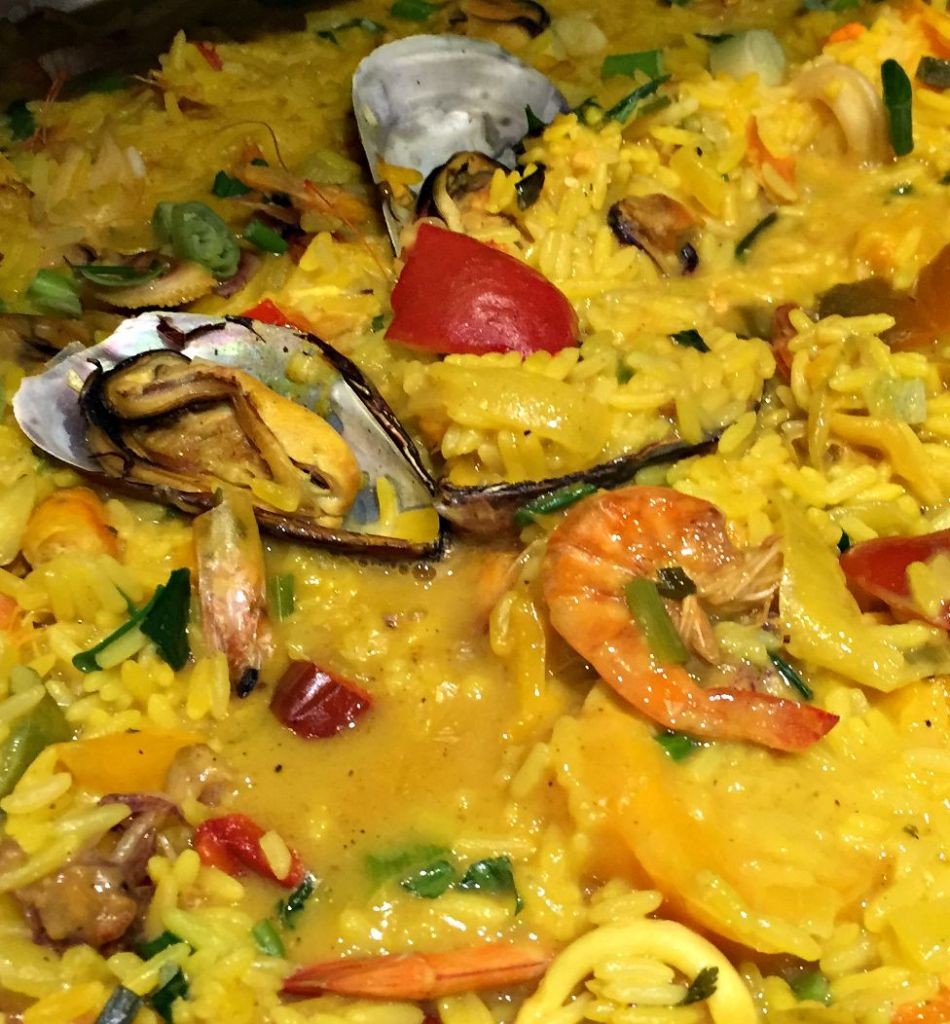 This is the kind of dinner to savor slowly and enjoy with some local spirits. We were treated to tasting of Tiquira as the evening began to wind down. This is liquor made from the distillation of manioc, or yucca root. If distilled improperly, the results are literally toxic. It might seem ill-advised to drink it – but tonight was not a night for caution. And my inability to restrict myself was well rewarded. 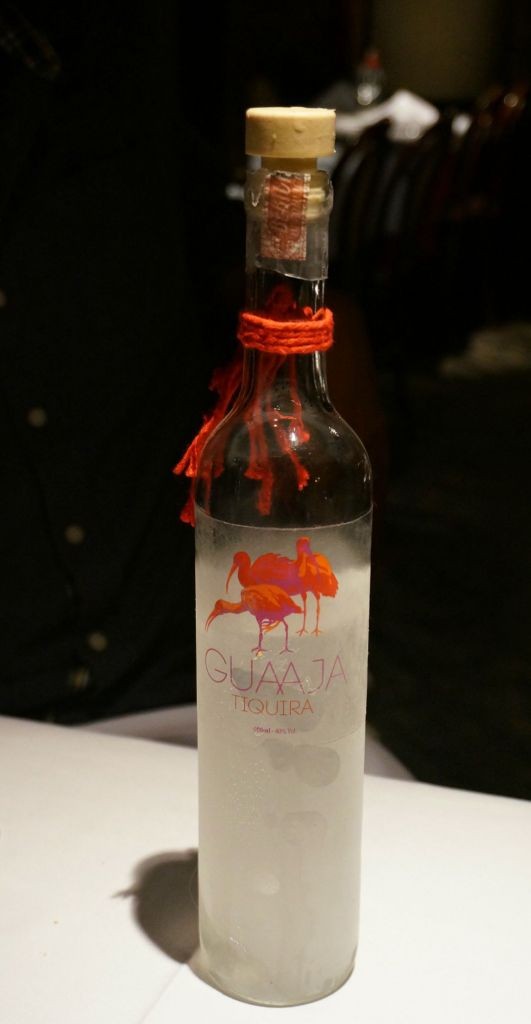 We finished off (or should I say we were finished off) with a sample dessert plate. It was introduced to us by the Churrascaria owner,  Antonio, who joined us toward the end of the evening. 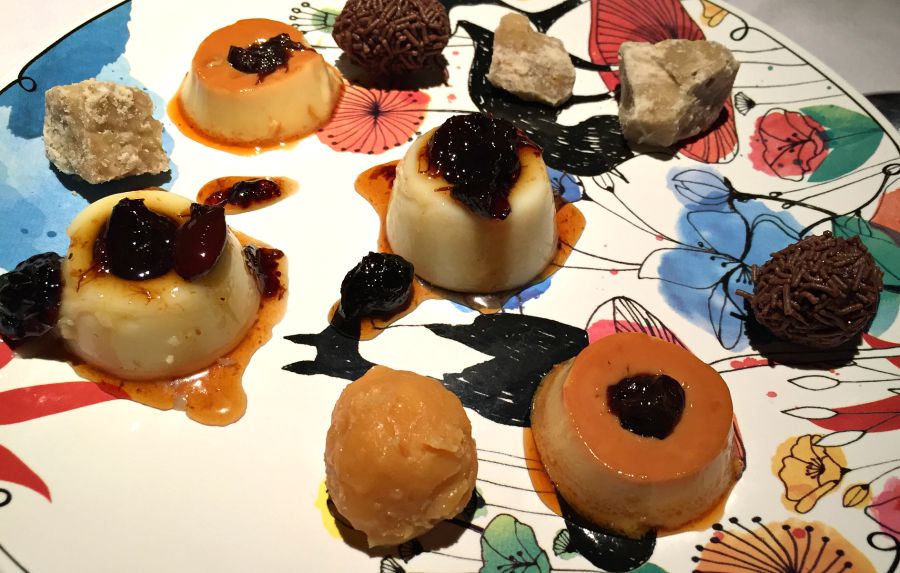 My previous experiences in other Brazilian steakhouses around the world (i.e., unlimited portions but poor quality and service – if you’ve been to one, you know what I mean) was very different here. Upon leaving the restaurant we firmly decided that we were never going to eat again. Against our own better judgement, we had succumbed to temptation, over and over. But, of course, it wasn’t long after this night that we started thinking about going back for another visit. 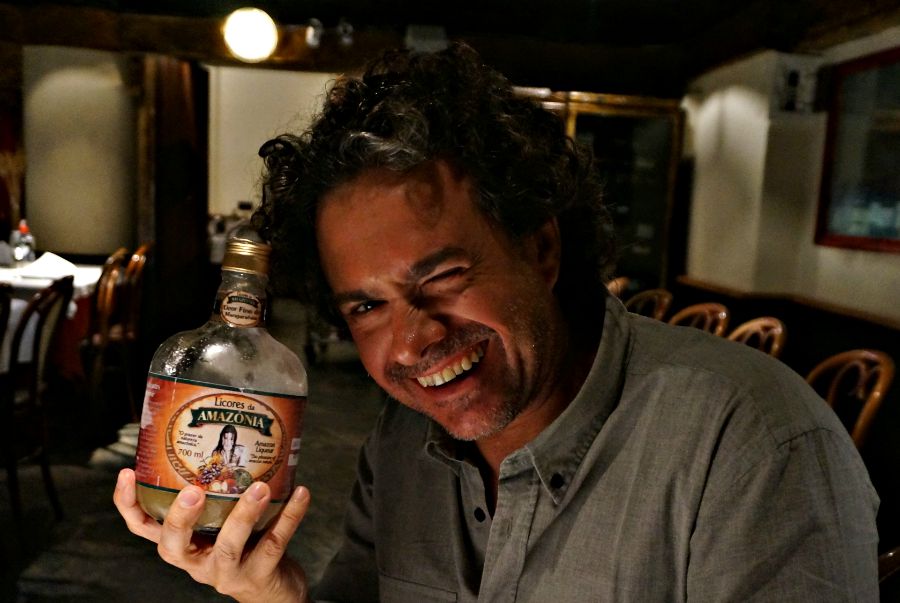 Do you think Antonio, the owner, is at all regretful of filling his guests with excessive amounts of food and spirits? Of providing an atmosphere where having an over the top experience is not only encouraged but expected? I think not. When you eat here, you see people smiling and having a good time, thoroughly enjoying the indulgence. And, as I waddled my way out the door, I thought to myself, without a doubt, so did I.

Espirito Santa – A Bite of the Amazon in Rio de Janeiro

The Best Sights of Rio By Bike

Kites and Satellites – the Favelas of Rio

A special thank you to Antonio, who hosted us as his guest for our evening at the Churrascaria Palace. Our opinions about the experience, remains our own.

We have not tried a place like this as we always seen the price and know we could never eat enough to justify it - especially the kids! But, perhaps one day we will have to splurge....after not eating for a week. LOL! It really does look like a wonderful experience.

Ahhh! The food looks so good!!! I love churrascaria's!

It looks like a great restaurant with a big variety and everything looks so tasty!

I don't really eat much meat, but I could see how this could be a carnivore's heaven! I'd be all over the gourmet cheeses at the extended buffet. Oh and the desserts... and probably drink too much of the local spirits.

We could have skipped the meat and just had a massive meal at the buffet. But the meat was too good.

Did you see that smile? No, he had no regrets!