Have you ever eaten chocolate spiked with tarragon? Or gone to a restaurant where you get a canister of carbonated water that you are supposed to use to mix with your wine? Or eaten cottage cheese covered with chocolate? Then you haven’t been to Budapest. And until recently, neither had I.

A Walking Food Tour of Budapest

We joined our guide Livia on a “Bites and Sights” tour that she has developed in the center of the “Pest” side of Budapest. This is the flat area on the right bank of the Danube River that is also home to the famous Jewish Quarter. These kinds of tours have become quite popular in Budapest over the last few years as inexpensive air carriers have made it possible for people to discover new destinations in Europe with ease. That is, if you don’t count the no-frills budget flight itself, but that’s a whole different story. 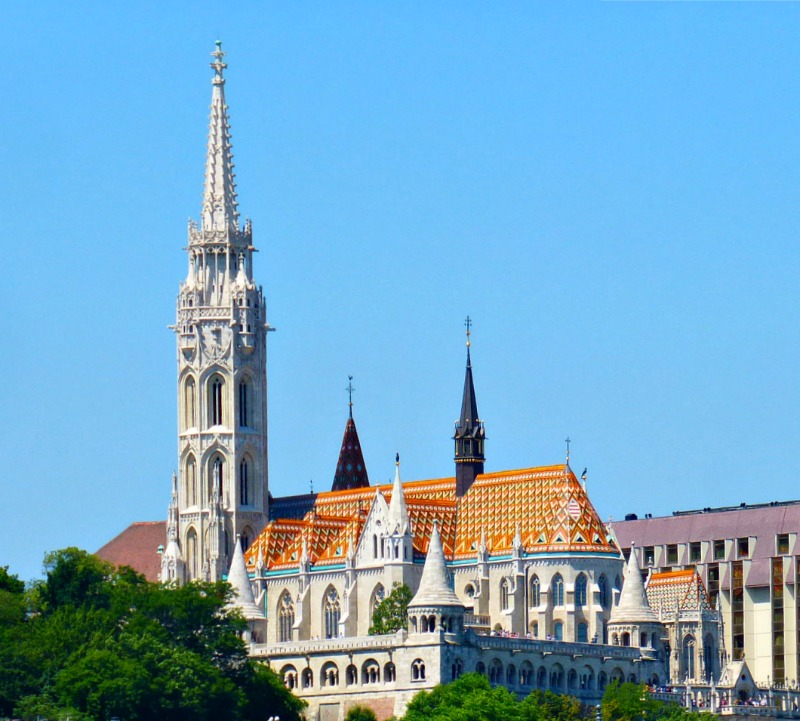 Beautiful Cathedral on the posh “Buda” side of the Danube River

In the last few years, tourism has actually taken over as the biggest economic mover in Budapest, inching out agriculture. Budapest is being discovered as an inexpensive destination packed with historic sites and trendy bars that make it a favorite for people looking for a bargain vacation or a great place for a quick European city break. The results on the community, with new pedestrian areas packed with tourists (and many drunken bachelor parties) all over the city, have resulted in mixed reviews from locals. The increase in economic opportunities – very welcome. Partiers depositing urine and vomit on the sidewalk every weekend, not so much. 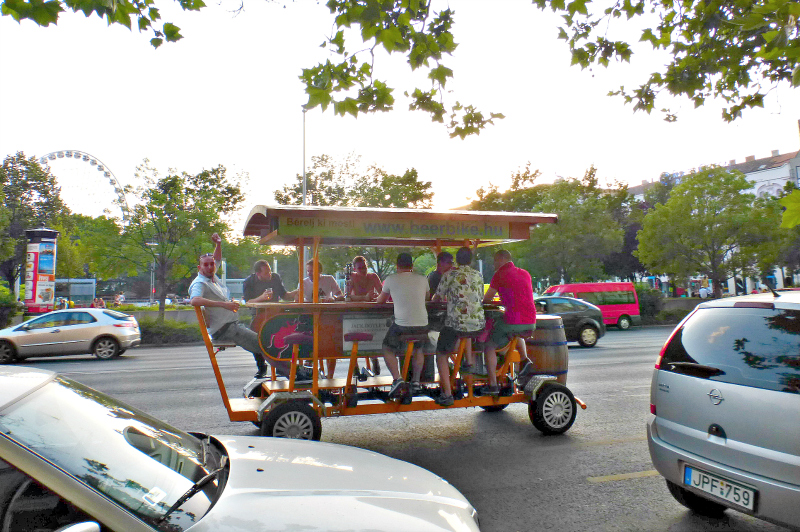 Partiers peddling down the road in a Beercycle in Budapest

Our guide, Livia, has had a front row seat to all of the changes in Budapest, having grown up here and witnessed the transition from communism to democracy a mere 25 years ago. The changes have been dramatic, and she gave us a very candid view of what it has been like from the eyes of an insider.

We started with the tour in the central market where you can still find many traditional food practices intact. For example, there were milk vendors who serves unpasteurized whole milk and other Hungarian favorite dairy products, such as cottage cheese. Milk, cottage cheese and sour cream are part of many dishes in Hungary, including this very common sweet snack (called Túró Rudi) which I had no idea was made with cottage cheese covered in chocolate until she told me. 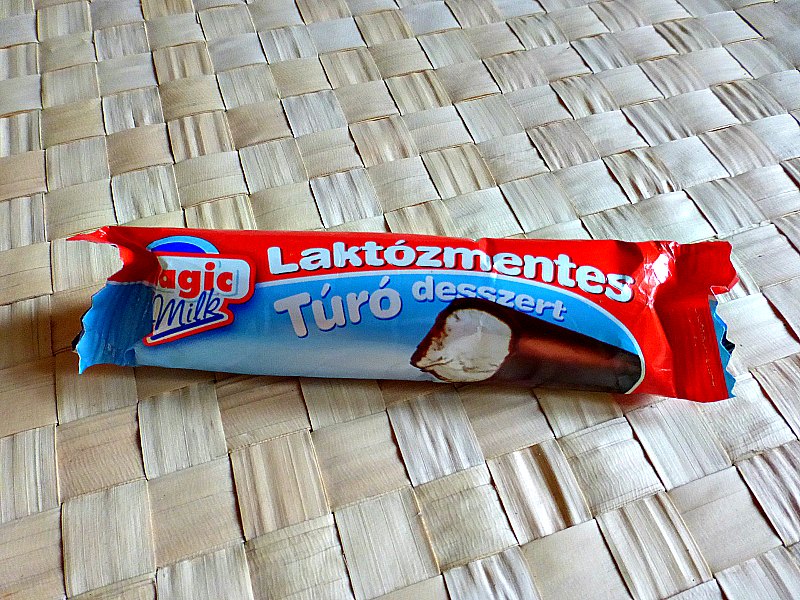 We also sampled several types of traditional sausage including that made from a pig variety called Mangalica. This pig, brought to Hungary by the Serbians has become a favorite because of its lower fat content. And the fact that it has a mild flavor and almost dissolves in your mouth doesn’t hurt. 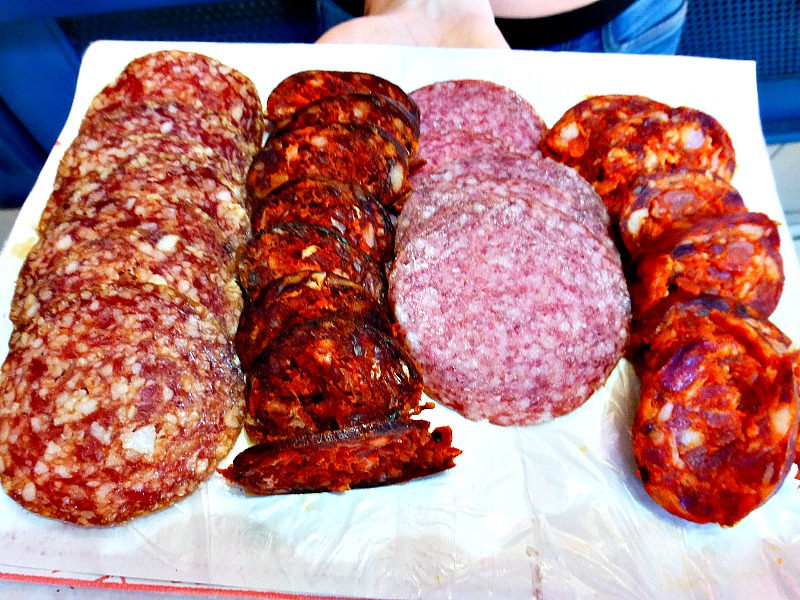 We finished sampling our way through the market and wandered outside to admire the building itself. The colorful roof tiles, which can be seen on several buildings throughout Budapest, are manufactured here in Hungary. 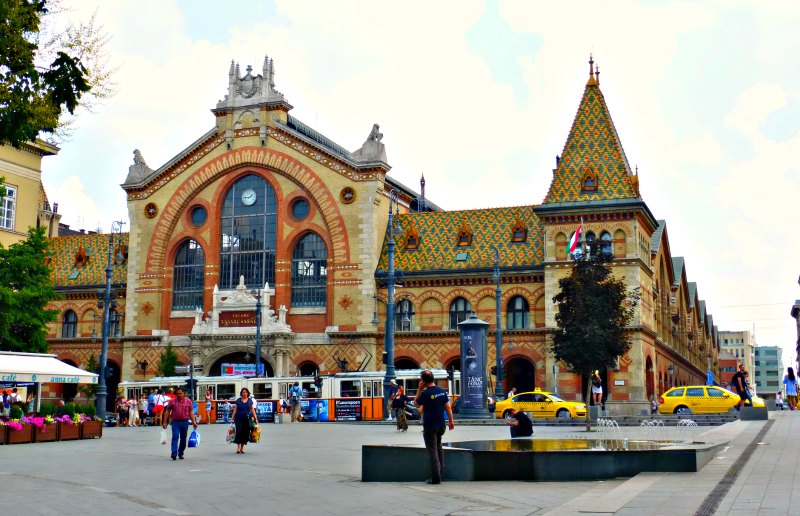 Our next stop was a local favorite lunch spot – the Rooster Fish Restaurant. The whimsical mascot and stories about his exploits that are plastered all over the restaurant’s interior has helped increase the restaurant’s following.  You can find examples of other restauranteurs using their creativity, sometime to unimaginable extremes, to decorate their establishments and attract customers. And it works. Serving inventive and delicious food on top of that keeps customers coming back. So over the past 25 years the ideals of communism that favored bland colors, an artificially leveled playing field, and not standing out in the crowd has been replaced. Bold colors, creative ideas and innovate flavors are now becoming the norm in Budapest. 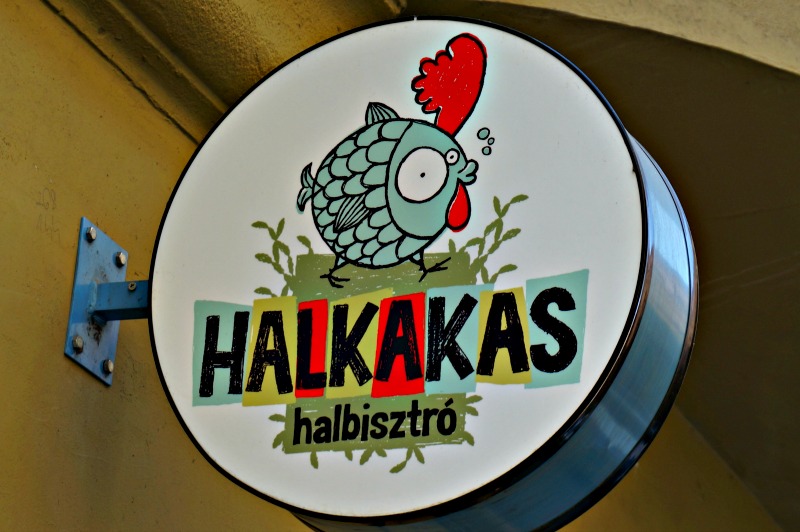 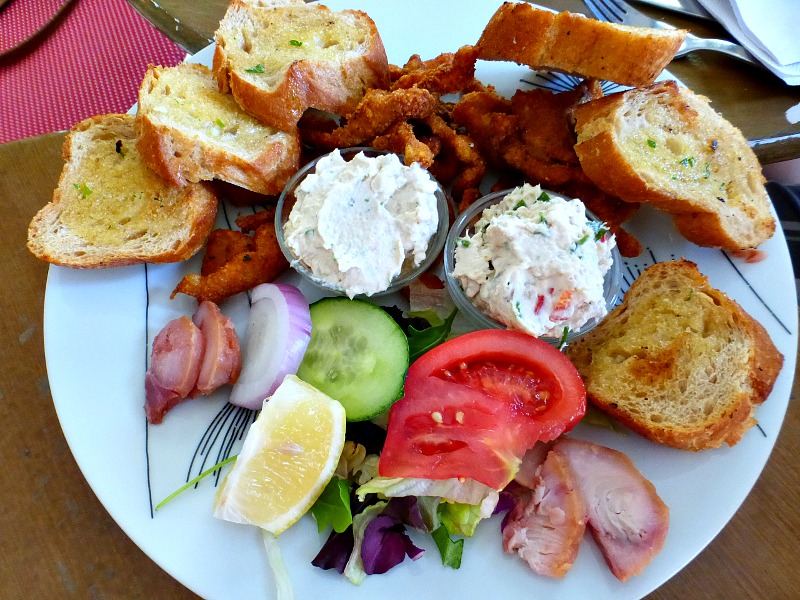 Platter with a sampling of fish with crostini

After leaving our Rooster Fish friend behind, Livia treated us to another surprising flavor. We visited a tiny artisan chocolate shop that specialized in unique flavor combinations, including tarragon spiked chocolate. If you are familiar with tarragon it’s challenging to consider what it would taste like paired with milk chocolate. The answer – unique and wonderful. 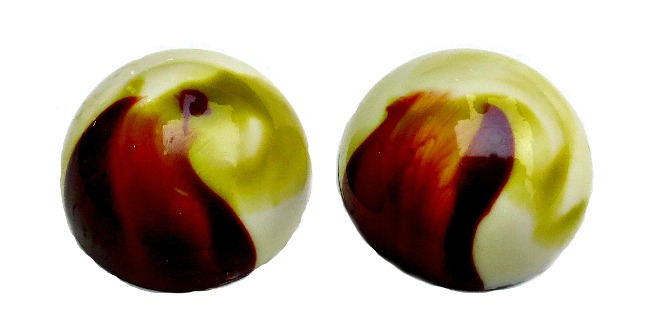 Our next stop was in a quaint bar that was overfilled with iconic toys from the 1980s. On the front door was a picture of former Soviet leader Leonid Brezhnev engaged in what appears to be a very intimate kiss with German Socialist Erich Honecke. This image sums up what some shared with us about their experience of living under communist rule. You were taken care of, fed, given every necessity. But dominated completely. But freedom comes with a price.

Today, the presence of homeless people and financial uncertainty led many, particularly the older folks in Hungary (who grew up under communism) to wonder if being free was a curse or a blessing. If you had all you needed in life but still needed to be careful what you said on the phone for fear of being imprisoned, it is worth the change? Livia related real stories of growing up and facing both challenges in a very real way. 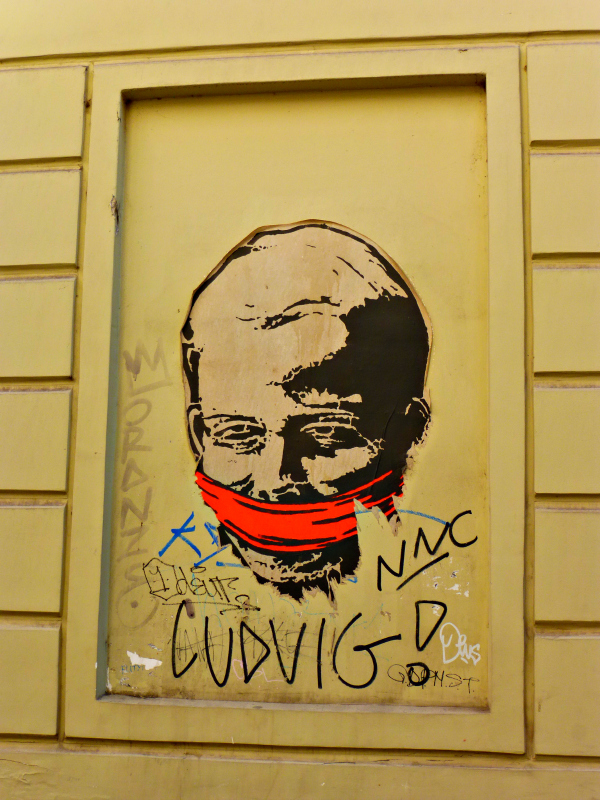 Street Art in the Jewish Quarter of Budapest

But back to the tasting! We were presented with a straw-colored drink that is a favorite summer drink in Budapest. The wine spritzer, or Frí¶ccs. Look around as you pass by the outdoor cafes and you can find a soda bottle for mixing on many of the tables. The beauty of the drink is that since your wine is now refreshingly watered down you can feel free to sip to your hearts content, all day long. Yet another reason to love Budapest!

We continued on our tour on a more somber note. We passed through the Jewish Quarter where, during World War II, the Jewish population of Budapest were confined, before many were transported to concentration camps and exterminated. Seeing the memorials in the quarter and throughout the city was a chilling reminder of the horrors of that time in history. 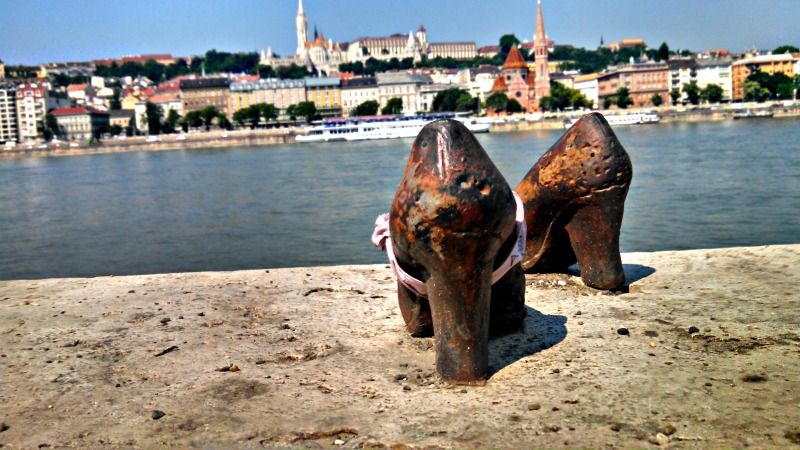 Now Budapest is home to only about 80,000 Jews. Due to the recent demands of cultural tourism, Jewish restaurants have begun cropping up in the quarter. So you can get a traditional beef tongue sandwich here, but that’s not necessarily what has been popular Hungarian fare over the years. 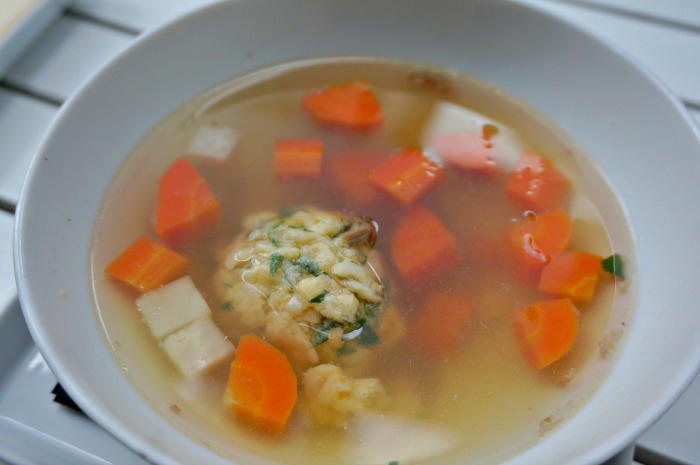 Two dishes that have passed the test of time were our last two tastes of the day. First, a bowl of Hungarian Goulash. But instead of the meaty noodle dish I remember, goulash is actually a beef soup flavored with the Hungarian favorite spice – paprika. Note: if you travel to Hungary, you will get to sample wonderful fresh paprika since they put it in just about everything. The flavor is unlike the paprika I grew up with (because it actually has a flavor). It will change your mind about the spice once and for all.

We finished off with a sampling of fruit and cheese filled strudel. The deceptively simple dessert is made by stretching the dough out to impossibly thin layers – possible due to the high gluten content in the wheat. After watching a demonstration I’d say leave it to the experts – they know what they’re doing.  And the taste of the pastry is delicious! 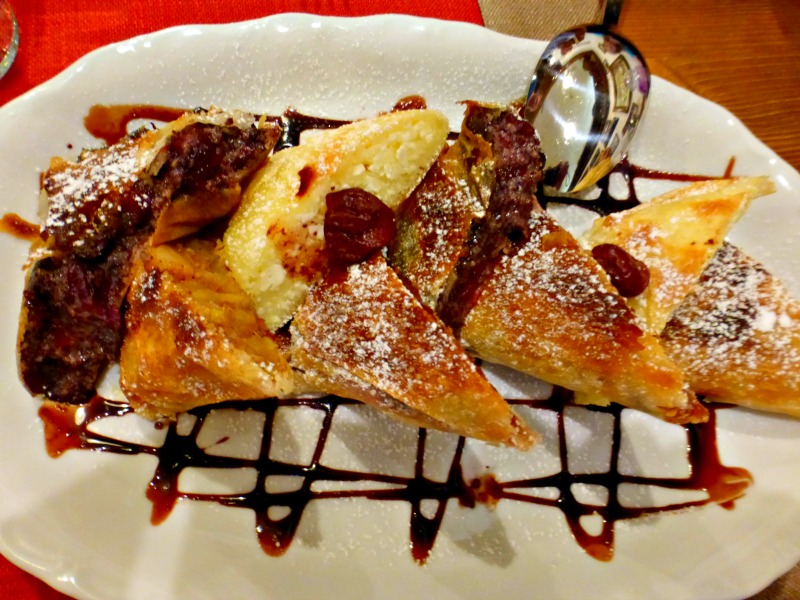 It’s a fascinating time to visit Budapest. Being in a place that had been under communist rule was really new for me, and hearing what that was like from people who have lived it (for the better or worse) was eye-opening. Learning about the horrors that happened on the streets while also seeing all of the creativity bursting at the seams on every corner was invigorating. And, being able to sample the traditional flavors of Budapest at the same time brought the experience all together.

Thank you to Budapest Urban Adventures for providing us with this tour. They specialize in showing destinations from the perspective of a local – which makes all the difference. As always, all our opinions are our own.

Related articles about travel in Budapest and a few Hungarian recipes you might enjoy: 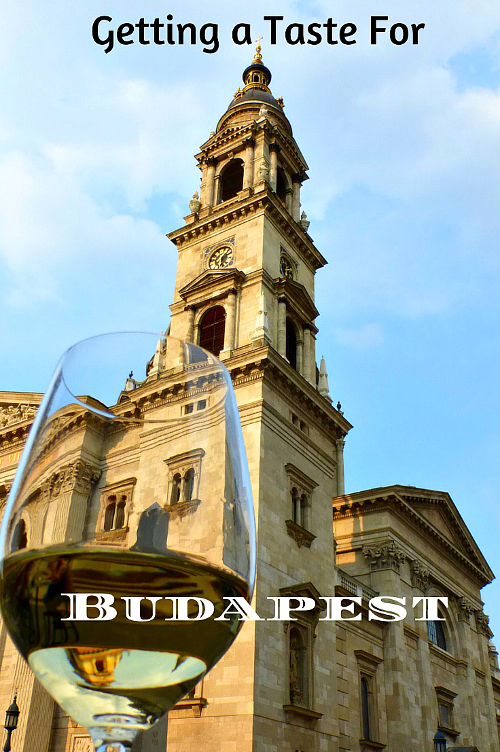 All the food looks so tasty and your pics of the city make me want to go there. Not sure I'd be brave enough to try the tongue sandwich. When I was in Ecuador, you could by tongue, vacuum packed at the super market. It's so much bigger than I thought it would be.

What a fantastic tour! Seriously do they even do bad tours in Budapest? There is just so much history and it's really fascinating that people are so open and willing to talk about the changes that Hungary has gone through over the years. Ahhh I want to go back!

There are definitely several dishes you had that I've never seen before. The Fish Rooster plate looks really good, and I think I'd like to try that chocolate covered cottage cheese bar. That's a great idea! Budapest is definitely intriguing.

Just pinned it! Would love to go on this same tour--chocolate and tarragon, and strudel would probably be my favorites! Unfortunately, I have a very sweet tooth!

I've only spent a day in Budapest on a quick trip from Vienna and even during that limited time, I've fallen in love with the city and would love to go back there again for a longer visit. Thanks for giving me ideas on what to go for when in Budapest!