Savory Blackberry Sauce (Rachuli Sauce) was one of the first sauces we tried when we arrived in Tbilisi, Georgia.

For those that are unfamiliar, Georgia (formally the Republic of Georgia) is a post-Soviet country nestled between Armenia, Russia, Turkey, Azerbaijan and the Black Sea.

Before we arrived, we knew about the cheesy bread (khachapuri) and the dumplings (khinkali) for which the area is most famous.

But other than that, we weren’t sure what to expect. And what we received was many pleasant surprises, such as the Rachuli, a savory sauce made with blackberries.

When we sat down at our first restaurant after our arrival, we ordered the khachapuri and a few khinkali. Then we asked the waiter for other recommendations, admitting that this was our first day.

We settled on a chicken kabab (which is a ground spiced chicken formed and cooked on a skewer, and served with onions and wrapped in cloak of paper thin white bread.

After we decided on the skewer, the waiter asked which sauce we wanted. We discovered that there is almost always a list of homemade sauces to accompany dishes at the end of the menu.

They ranged from a spicy ajika sauce, a tomato sauce, mushroom sauce and frequently mayonnaise and mustard. He read our blank looks and suggested that he bring the Rachuli sauce, “it’s lovely,” he said. And it was.

Don’t forget to pin or bookmark the recipe for later! 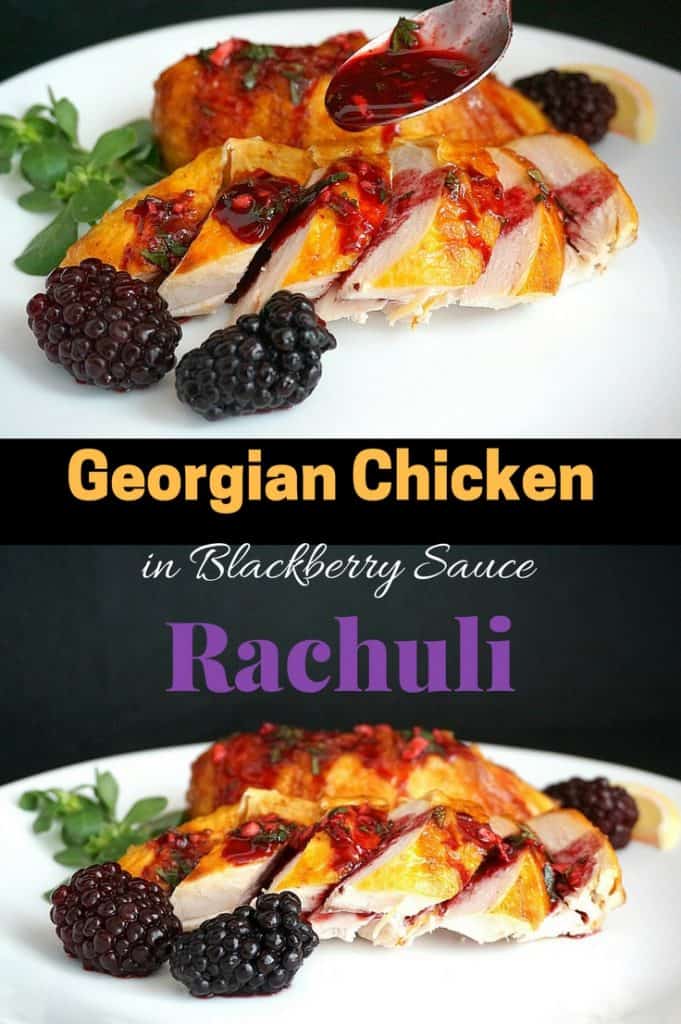 We expected that we were going to be dousing our chicken in a sweet sticky sauce, and it was anything but. The flavors of the blackberries came through but married with garlic, fresh cilantro and other spices we couldn’t identify.

That was true of much of what we ate in Georgia.

Everything looks very familiar and simple, but ends up tasting complex and not quite like anything else you have ever had. A true foodie heaven!

The use of a spice blend called Khmeli suneli was partly responsible for our baffled pallets. 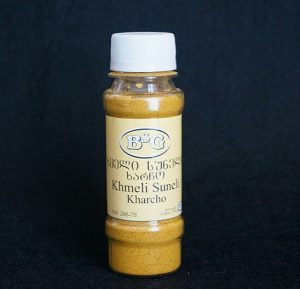 There are many variations, but blue fenugreek, ground coriander and dried marigold are almost always present. It’s a very distinct flavor that is commonly known as Georgian Curry.

I’ve provided a substitute in the recipe, which includes equal parts of blue fenugreek, ground coriander seeds and turmeric.

In this recipe the sauce is paired with browned chicken breast fillets, but it goes well with poached or roasted chicken and so many other things.

For a quick and unique weekday dinner, try buying a whole unseasoned rotisserie chicken and just make the sauce to go with it.

If you love Georgian Cuisine or are looking for a few recipes to branch out of the norm, here are a few additional Georgian recipes to try. We have also included a few articles about travel in Georgia, and things to do in the capital city of Tbilisi, that may just inspire you to visit the intriguing country of Georgia. For the Rachuli Sauce