Finding Rome Italy’s hidden gems was one of our favorite days in the ancient city.

On a visit to Rome, the most popular tourist attractions are hard to miss. There are plenty of places well publicized in the guidebooks that will have a nice long line for you to snake along in, and they reward you with some pretty spectacular sights.

But there are also lots of lesser known places that are worth hunting down and enjoying at your leisure. Here’s a list of some hidden gems well worth tracking down. 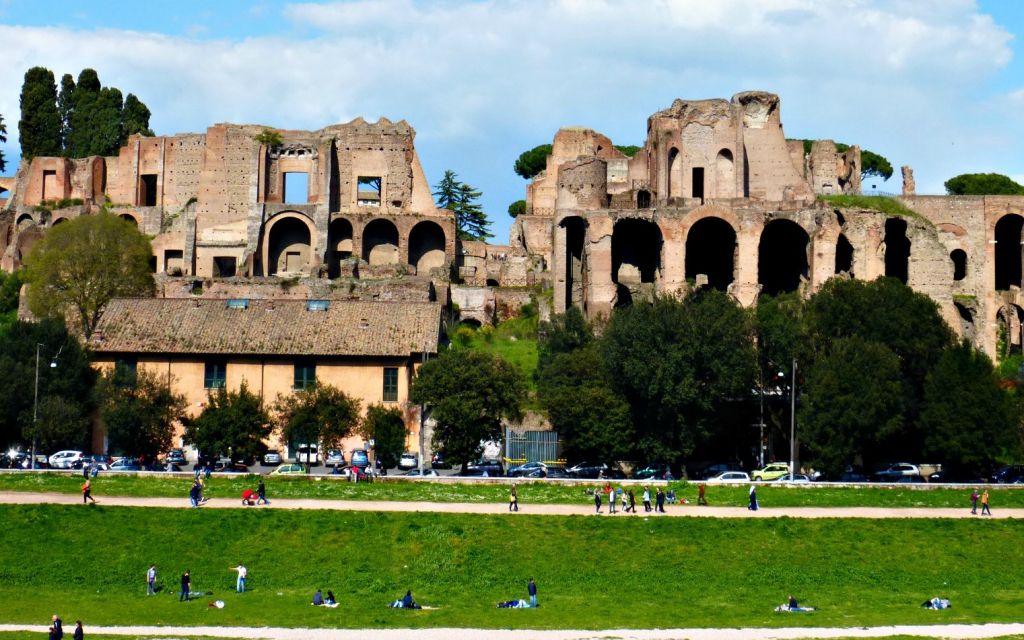 View of the Emperor’s Palace from Circus Maximus

Instead of joining the crowds on top of the Palatine Hill to see the ruins of the Emperor’s Palace, considering heading to the other side and taking in the sight from Circus Maximus.

From here you can take in the enormity of the former arena, and think of the roaring crowds that used to enjoy the chariot races that were held here. I

n Roman times, the Emperor could stroll from his palace to take in the spectacle below.  The area is now great for less taxing pursuits, like taking a nap in the sun.

Walking through the ancient Jewish Ghetto will allow you to enjoy the narrow streets and some relatively quiet spots in the midst of bustling Rome.

Wander into a courtyard and you can find former residences decorated with marble carvings that were part of abandoned buildings scattered throughout Rome. One man’s trash….. 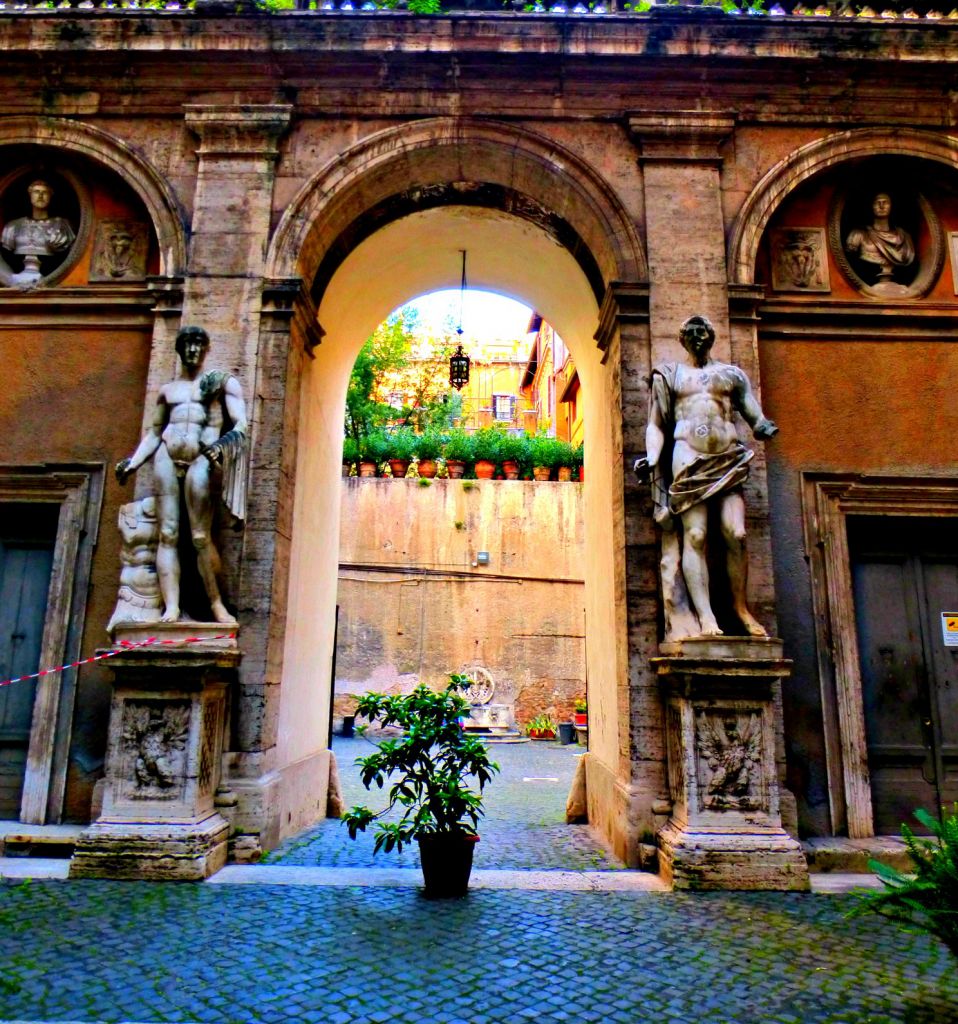 If you are lucky enough to visit in the spring don’t miss the artichokes. The specialty in this area is the deep-fried Jewish-style Artichokes. They are simple, but delicious. 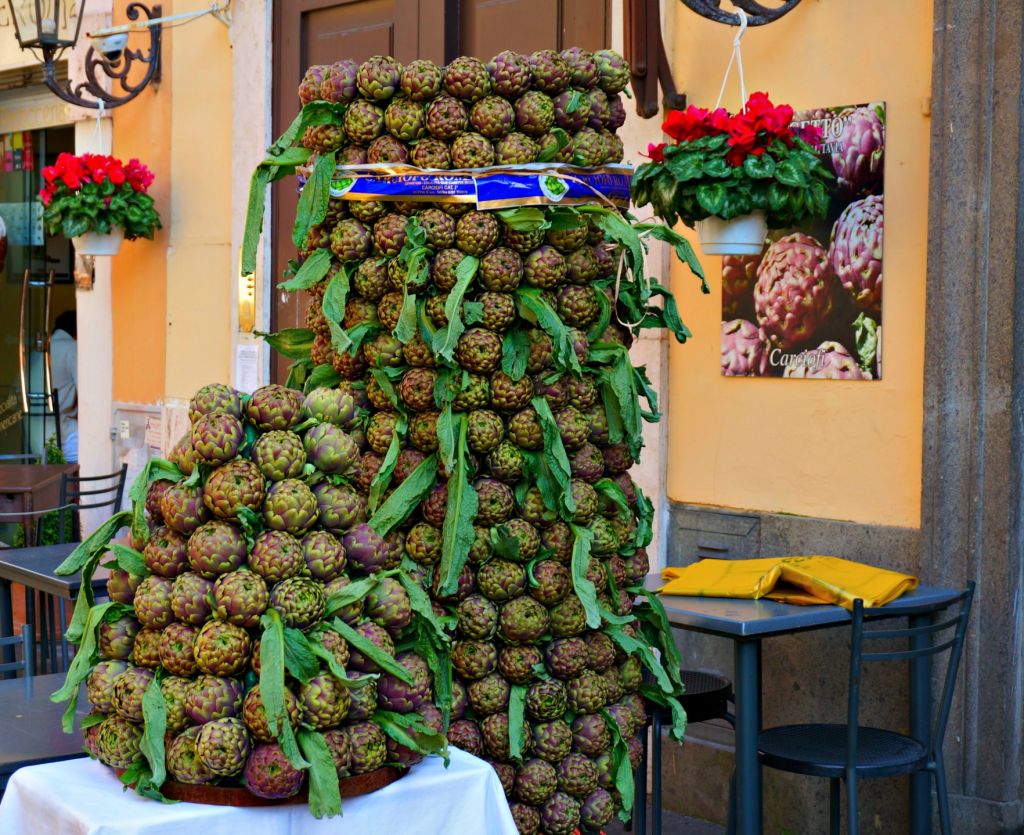 Round Roman artichokes outside of a restaurant in the Jewish Quarter

Piazza of the Knights of Malta

On the top of the Aventine Hill, in the quiet Piazza of the Knights of Malta, you will find one of the most beautiful sights in Rome.

This view St. Peter’s Basilica, found in the keyhole of a large green door, is easy to miss when there are no other tourists or Sunday strollers around.

But if you do wind your way to the top of the hill see if you can find the keyhole and bring home one of the best photo souvenirs of your visit to Italy. 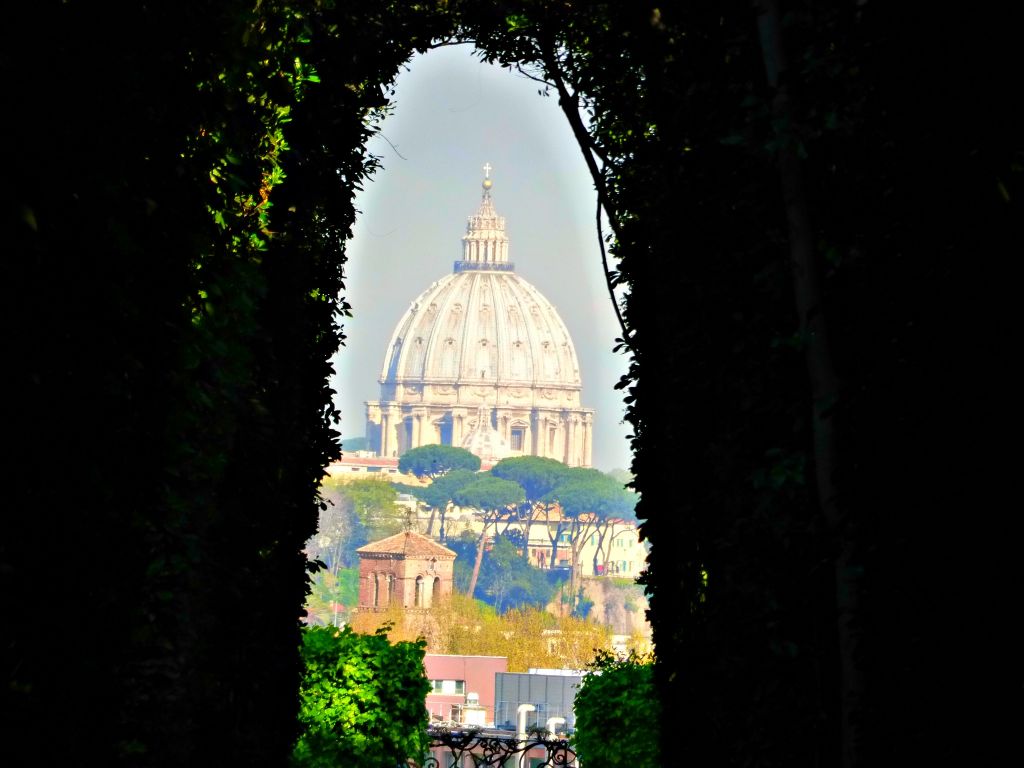 This ancient Roman road’s construction began in 312 BC, and was an important thoroughfare for merchants doing business in Rome.

Despite thousands of years of traffic including chariots (whose wheel tracks can still be found in the stone) and modern cars.

You aren’t actually supposed to drive on this road, but we witnessed a random car passing by here and there.

The condition of the road today is astonishingly good.

One of many engineering wonders of the empire, it is said that at the time the road was made it looked like the stones were carved in order to fit together so tightly. 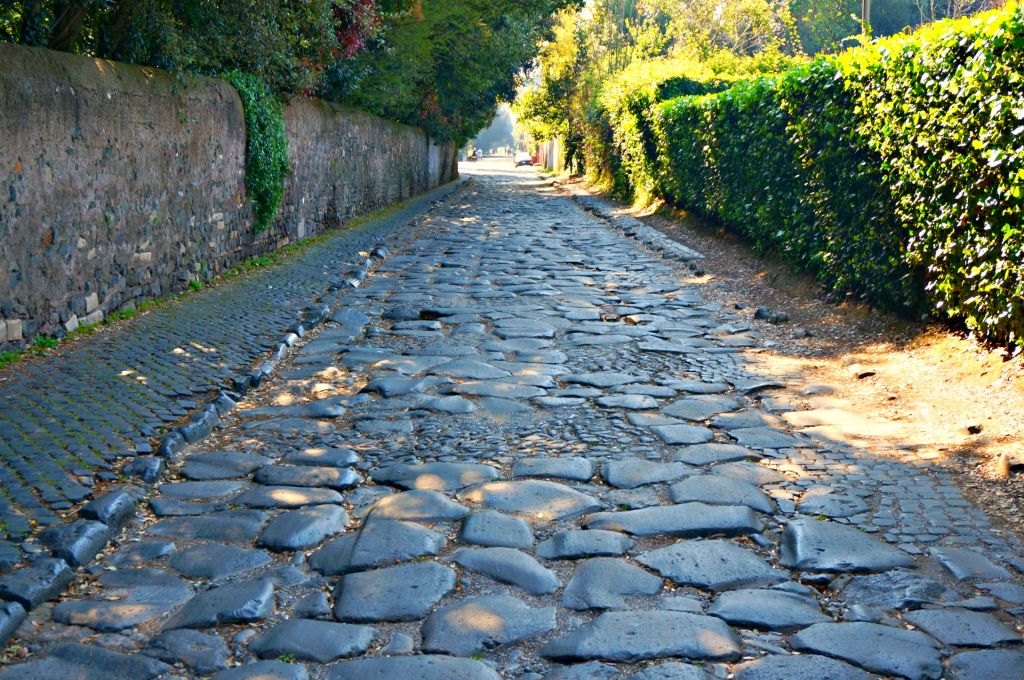 The Cannon of Gianicolo

How do you know for sure that it is noon in Rome? Not lunch time – in Italy, noon is much too early for that.

You listen for the cannon blast, which occurs precisely at noon, every day.

Head to the top of Janiculum Hill to witness this small ceremony which dates back to 1847.

While you are waiting for the blast, you can enjoy a spectacular panoramic view of the city below. 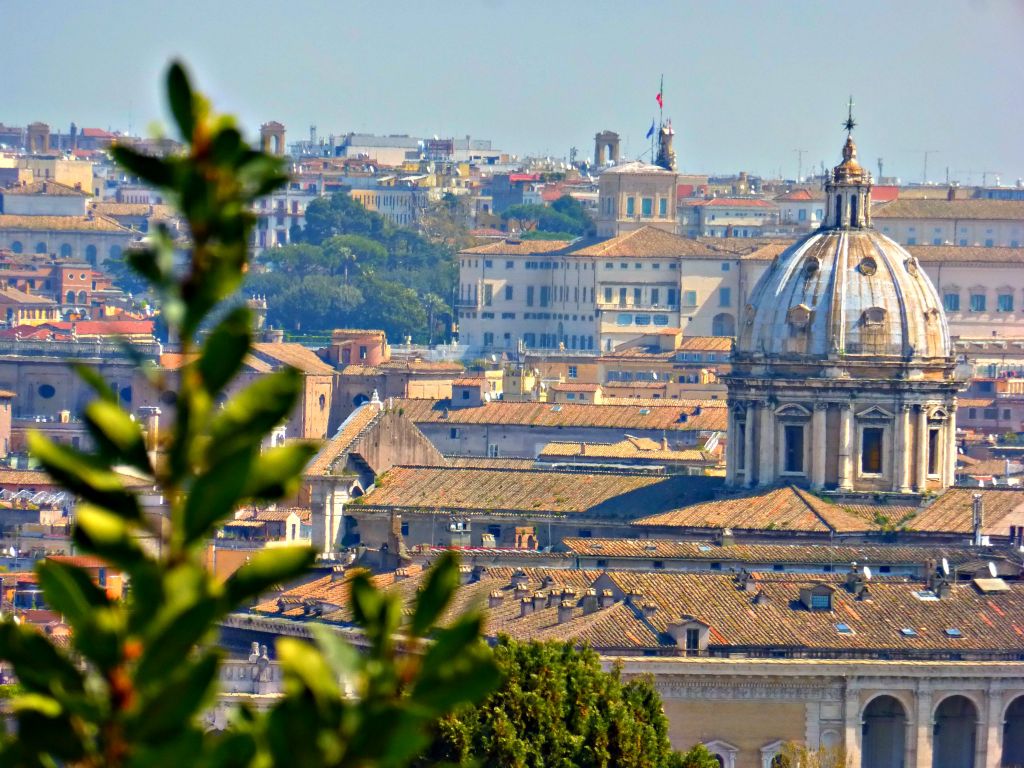 View of Rome from Janiculum Hll

The Aqueduct Park is part of the Appian Way Regional Park. You can enter the park and view the remnants of two if the ancient aqueducts that supplied Rome with fresh water for hundreds of years.

he tranquil park is filled with lush green umbrella pine trees. The cones of these trees are where pine nuts are harvested to create Italian delicacies such as pesto.

Here you can enjoy a few hours in the shade surrounded by history, minus all of the crowds. 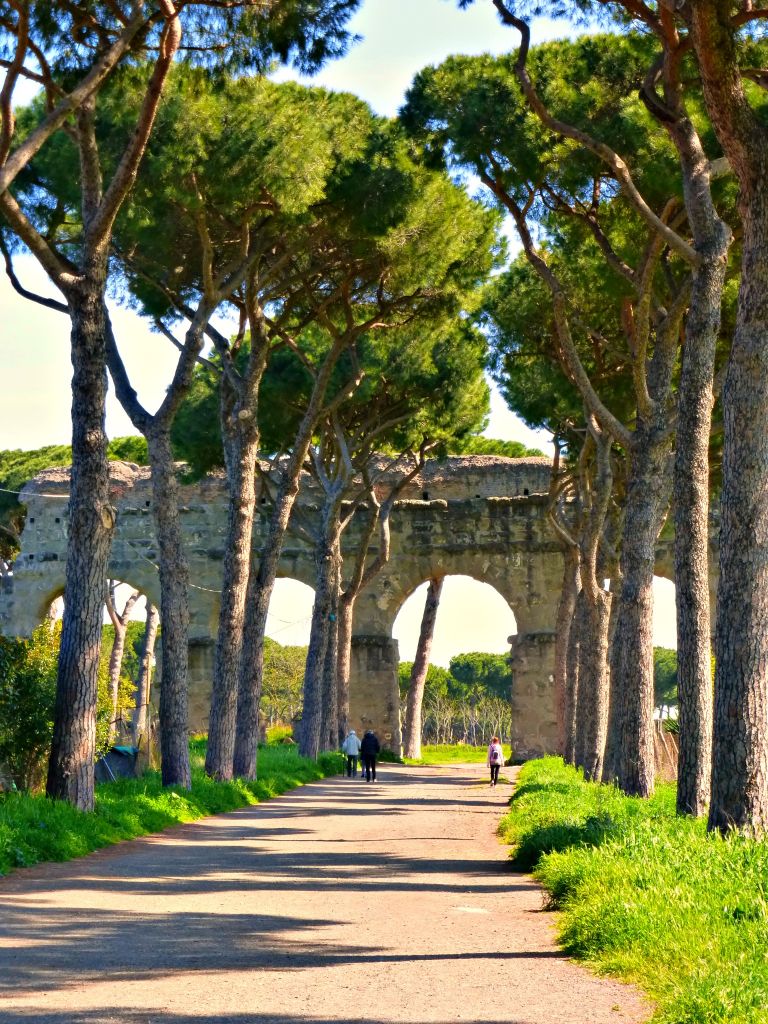 As you wander the street of Rome you become quite accustomed to seeing ancient ruins. There will be toppled over columns preserved and enveloped in the side of a modern building.

Amidst the ruins is a sanctuary that is home to 200 stray cats, cared for by volunteers. It’s one of the most unique cat havens in the world. 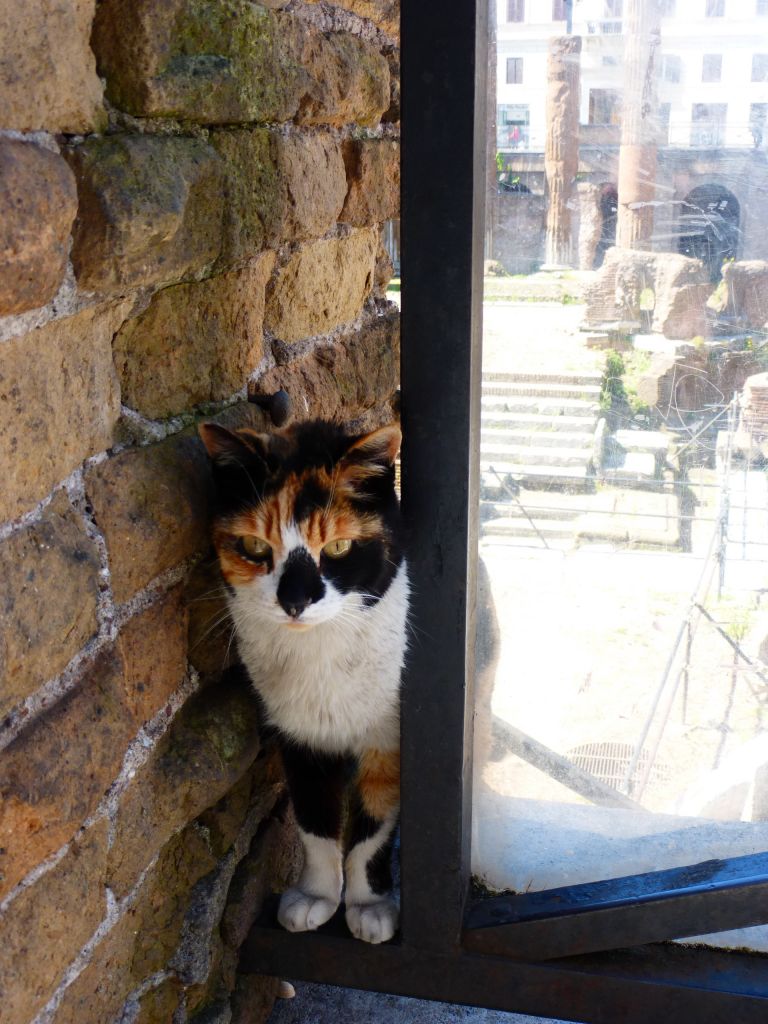 Finding The Best Food in Rome

Anyone traveling to Italy has to be looking forward to trying some of Italy’s world class cuisine. But how do you find your way off of the tourist zone to eat like a local?

I suggest taking this food walking tour. A local guide leads the way to small meat and cheese shops for food and wine tastings.

The tour also includes stopping at a pizzeria to make your own pie and ends with a sip of the best coffee in Rome! How could you go wrong?

There is plenty to see in Rome, in many cases whether you are looking for it or not. But, it’s easy to wander right by without knowing the significance, importance or charms of what is under your nose.

We were guided to many of these spots by the expert insiders at Walks of Italy.

You can find out more about taking a Hidden Gems Tour with them, or another one of their in-depth tours that will help you truly discover all that a visit to Rome has to offer.

Other related stories about Italy that you might enjoy:

How to Beat the Crowds at the Vatican

Where to Eat in Rome? In the Kitchen Cooking With Nonna

We took our then teenage sons to Rome in 2004. I was concerned they might get tired of museums and sightseeing, but even they were fascinated by the ancient history at every turn.

I REALLY need to make my way over to Rome. Shocking to live in europe and not have visited yet!

This made me miss Rome. Some great tips and even a couple places I didn't make in my five months there. I loved the Jewish Ghetto, so full of history, good & bad and absolutely beautiful. Thanks for sharing.

Even five months isn't enough to peel back all the layers! We love Rome.

Wish I had seen this post before going to Rome last year. You did a beautiful job of capturing and writing about some true Roman gems. We didn't see these, but we were pleased to learn about and visit Ostia Antica, which is also a lesser known attraction just outside Rome.

I'm going to Rome in less than a month, these tips might come in handy