Anyone familiar with Italy knows that Parma is a foodie mecca. The region is well-known as the home to Parmigiano Reggiano cheese and Prosciutto di Parma (Parma ham). The city of Parma has also recently been named a “City of Gastronomy” by UNESCO, further highlighting the region (and the city) as a food destination. So, during our recent visit to Bologna, we decided we’d take a road trip to see this city of food for itself.

Hiding in the Cellar: Culatello 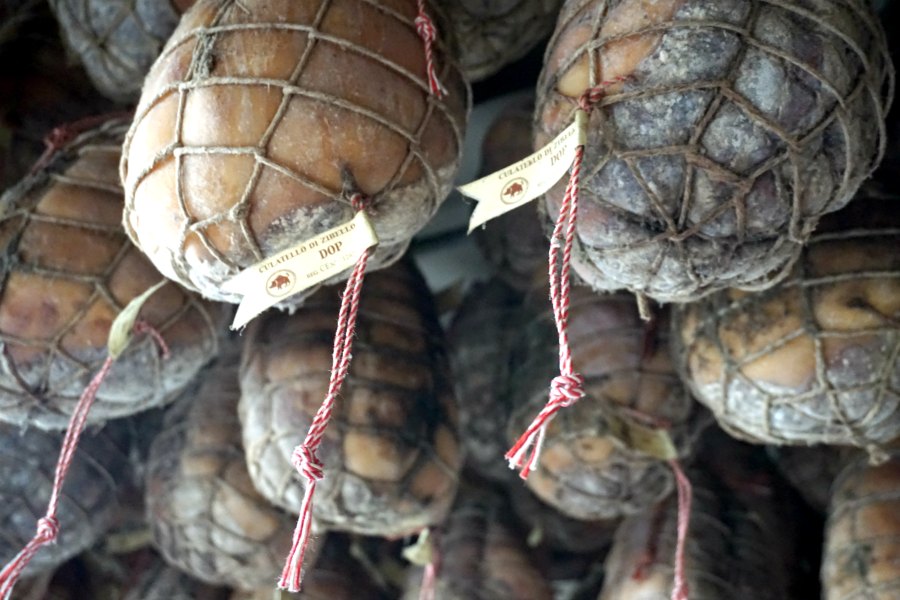 Our first stop on the road was to taste something new for us: a cured meat called culatello. While Parma is world-reknown for it’s famous ham, the region is home to many more cured meats (which are all referred to as “salumi” in Italy). Culatello is one of the most expensive salumi in Italy. Mentioning culatello to any locals from the Emilio-Remagna region is usually met with an ecstatic rolling of the eyes, as they imagine tasting the meat. We were repeatedly informed that the best culatello producers have salumi in their cellars that are earmarked for specific customers, including members of royal families.

We visited the Al Vedel restaurant, owned by the Bergonzi family, who have been producing culatello since 1780 in their specialty basement curing rooms. Traditional prosciutto is dry aged in the air, and legend has it that culatello came about when attempts to age prosciutto in the damp air next to the Pio River failed.

To produce culatello, a portion of the pork leg used in making prosciutto is salted, and then encased in a pork bladder. The stuffed bladder is then trussed with string in a very specific manner, and the meat is hung in the cellar for at least 12 months. The dampness is a key component of the process. This was immediately obvious as were ushered down to the basement, to the “podere cadassa”, or “house of taste”.

Our first impression of the cellar was disconcerting. As we descended the stairs, we were hit by an odor that can only be described as “musty.” It was quickly explained that this odor was on purpose – the environment is a key component of producing culatello. We entered the cellar, and were confronted with thousands of hanging salumi, hanging low enough that I had to walk crouched over. The hanging salami were covered with mold, and our shoes left footsteps in the mold on the floor, which was damp from the river water seeping in from below. This mold, the dampness, and the temperature all create the environment that helps preserve and flavor cullatello.

After exploring the subterranean production area, we ascended to the restaurant to try some for ourselves. We did a tasting in the restaurant wine room, and of course accompanied our plate of meat with local wine. So, how did the culatello compare to other salumi? In one word: divine! The meat was sliced paper thin, and when we placed it in our mouths, it quite literally melted on our tongues. The flavor was salty, and the flavor of the pork simple but delicious. We were served far more than we should have eaten, but we left the trays picked clean.

A Cooking Class in a Castle

Our next stop, of course, involved more food. As you probably know, we always jump at the opportunity to take cooking classes. In Colorno, we visited the Alma International School of Italian Cuisine. We’ve been to all sorts of food tours and classes, but this is the first time we’ve attended one inside a palace. The Ducal palace, referred to by locals as the mini Versailles, is home to the school and has stunning architecture and gardens. It was nice to be able to walk around the palace and gardens, to burn a few calories before our next meal.

Many of the cooking classes we attend are geared towards visitors and tourists. The Alma school is a professional university, and has trained chefs who work in some of the most prestigious restaurants in the world. It has official test kitchens, professional chefs teaching the classes, lecture rooms with kitchens, and close digital screens showing close-up shots of the food preparation.

For our class, the chefs demonstrated the preparation of a risotto dish made with onion and tomato, and a lot of butter and cheese. The preparation was fascinating, and incredibly detailed. It gave me new appreciation of the amount of work that goes into professionally prepared dishes. And of course, we were able to sample the finished product, which was delicious. Once again, we ate far more than we should have.

Before we departed on the road trip, we researched visiting a factory that produced Parmigiano-Reggiano cheese. We found out we would need to visit early in the morning, or have an official tour guide, and with the drive to Parma, decided we wouldn’t be able to do an “official” trip. That didn’t dissuade us, though. In the car after our cooking class, we saw a sign on the side of the road for a production facility shop. After pulling in and exploring the shop, we smiled nicely at the women behind the counter and asked, in our broken Italian, if there was any way we could see the racks of cheese in the back. We were lucky! One of the women nodded and beckoned us through the back door.

Ok, caveat: I like cheese. I really like it. But Jen’s love for cheese goes far beyond, like it is some sort of magical element. So, when we stepped through the door to the aging room, and seeing wheel after wheel of Parmigiano-Reggiano, stacked to the ceiling, her jaw dropped. And, it was a jaw dropping sight.

With each wheel averaging about 38 kilograms (84 pounds), stacked 20 high and 20 deep, the massive warehouse with over a hundred rows was a monument of cheese. And, at a value of about 500 Euros per wheel, I quickly calculated the the warehouse contained about 20 million euros worth of Parmigiano-Reggiano.

Why is it so expensive? The wheels must be aged 12 months, at which point each one is individually evaluated for quality by the consortium, to determine whether it can be officially called named Parmigiano-Reggiano. If it passes, it can be fire-branded and sold to consumers as “fresh”. The wheels can also be aged longer, with designations (and more expensive prices) for 18, 22, and 30 month aging periods. 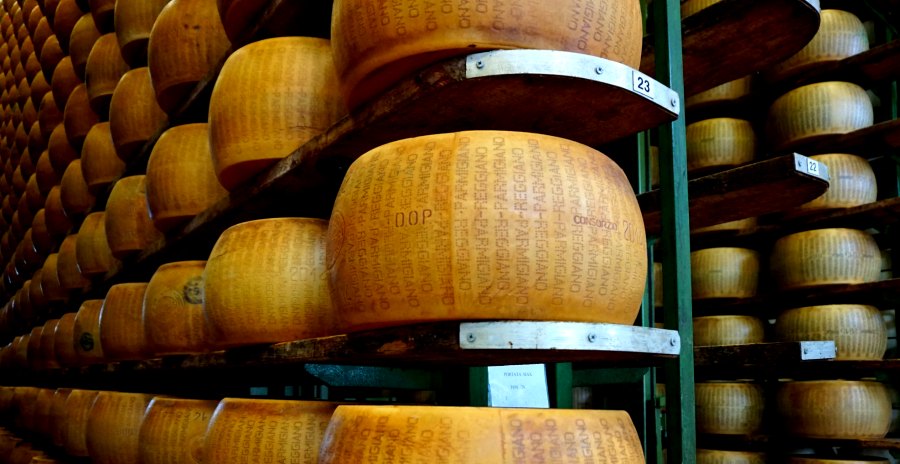 Due to all of our activities throughout the day, it was late afternoon by the time we found our way to the city itself. Parma takes it’s city of gastronomy name pretty seriously, we found. We walked by a 24-hour vending machine, that offered, among other things, sections of cheese. You know, for that late night cheese emergency. 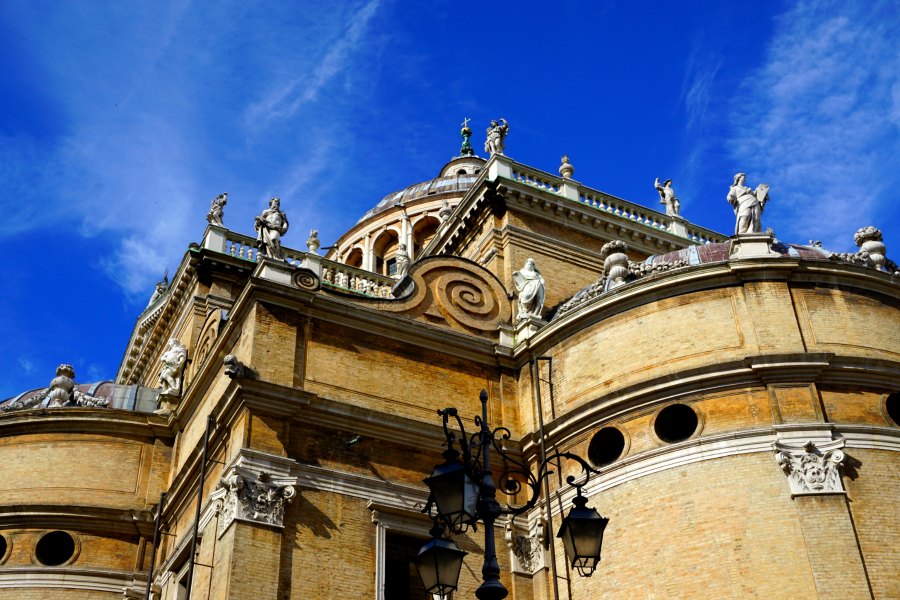 We wandered the main thoroughfares and back streets of Parma, checking out the incredible architecture, and of course, reading menus along the way. After our food-laden day, though, we weren’t up for more eating. We vowed to come back to explore the city (and of course, more if its food) again.

Related articles about visiting the Emilia-Romagna Region that you might enjoy:

Visit our Food Finds/Recipes Section for recipes inspired from our travels.

We attended this tour as part of the Blog-ville Project in coordination with the Emilia-Romagna Tourism Board.

Note: some of the links on this page are affiliate links. Which means that if you click on them or make a purchase, we may receive a small referral fee. So click away – and if you do thanks so much. We sincerely appreciate your support.