I have to admit, before I left on this tour I was a little anxious. But whatever apprehension I had was met, matched and trumped by the enthusiasm and forward motion of our guide, Oscar. And in this case, propelled forward through the crowded streets of Barcelona on an electric bike. Sorry folks of Barcelona, ready or not, here I come. 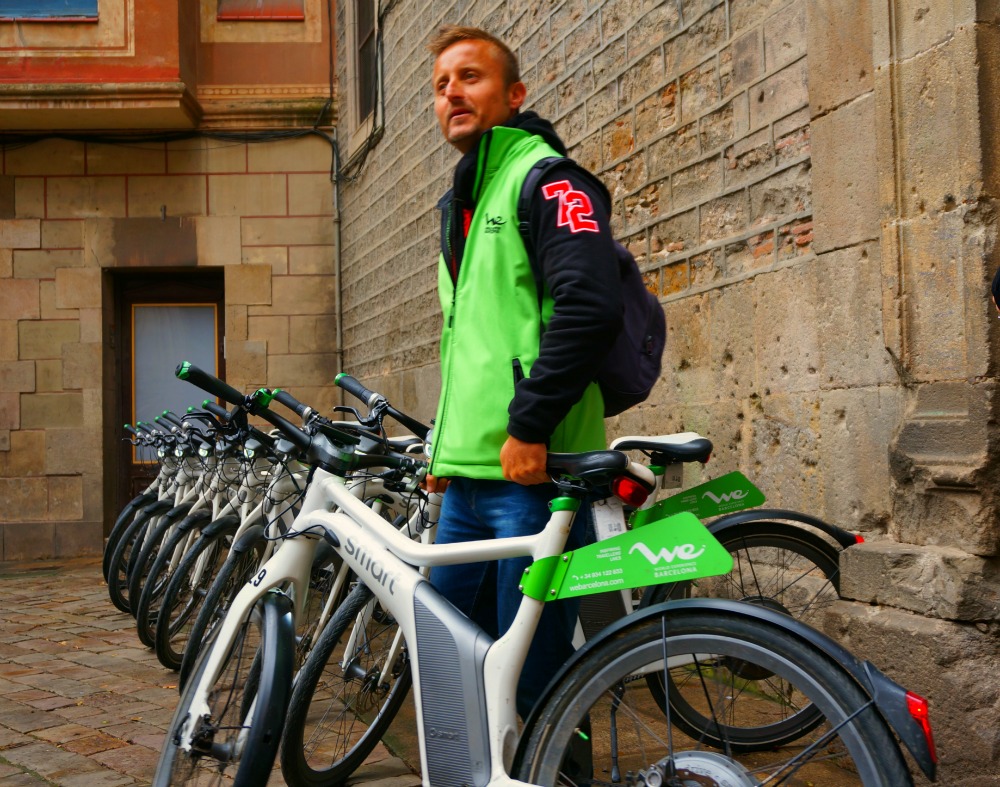 We started the “Land, Sea and Air Tour of Barcelona” tour in a little courtyard where we practiced peddling the electric-assist bike. After climbing on my bike of choice, I pushed one foot forward on the pedal and the bike operated pretty much like a normal bike. Then the next foot went forward and the bike launched with an electric powered jolt of energy. Getting the hang of this in the ancient cobbled round courtyard didn’t do wonders for my confidence.

The building that made up the courtyard were pitted with holes from a bombing that claimed the lives of 42 people in 1938. It was decided not to repair the holes as a reminder of the tragedy of that day. I hoped that I would not also leave a nasty reminder of my stay as a result of my riding skills on the buildings, monuments or pedestrians.

After assuring myself that my international medical insurance policy was up to date, I joined the group and headed off into traffic. After a little practice and only a few near collisions I (mostly) got the hang of it.

And it was really nice to get the extra boost of power as we climbed the hills of Barcelona for some spectacular views. There are many famous attractions in Barcelona, and despite all of my previous research, this particular view was a pleasant and unexpected surprise.

To get to the very top of Montijuic Mountain, we took it a little easier and rode up in cable cars (the air portion of our tour). Relieved that I would not be paragliding my way down the hill, I was able to really enjoy the scenery.

My relaxation was only briefly interrupted when the cable car operator needed to shut down the line in order to untangle and retrieve my bike. No harm done. Being treated with an unexpected arguably one of the best views of Barcelona was well worth the effort.

An unexpected treat as we glided down the hill was a stop at a desert-themed botanical garden.

At the bottom of the hill we made our way through the back streets of Barcelona to get a view of the beach. The  man-made sandy stretch of beach is a very popular spot for locals to hang out. I took in the beach vibe so close to the city center with the many surrounding restaurants and made mental notes for a return trip when I had more time.

The bike ride was a perfect opportunity to tour some of the lesser-known neighborhoods of Barcelona and get a whole new appreciation for this beautiful city.

Our last stop was a relaxing mini-ride on a catamaran around the harbor. It was a nice way to relax and enjoy views of Barcelona from the water.

By the time we got off the boat and back on the bikes to head back to our starting point, I was thinking “I could really do this again.” Happy with my lack of injuries (to myself, others, or any historic sights), partially due to the vigilance of others on the tour when I braked and swerved erratically, I now see the whole trip as a big success.

Honestly, when asked about what to do in Barcelona, I would happily add taking the “Barcelona from the Land Sea and Air Tour” to the list.

And one good experience deserves another: we celebrated finishing off our tour with a local brew.

We found a really good one along with some great food and a tour at Cevezeria Moritz. Brewing beer since 1856, these guys really had it down. They were also were really proud to show us both the old elements and new ones that were turning the factory into a sustainable, energy efficient modern establishment.

It was a nice way to finish off an exhilarating day in the city. And as I enjoy my beer, I am mentally buying one for each one of the pedestrians that had to jump out of my way as I inexpertly jockeyed my bike through the Barcelona streets. No harm intended, none done (that I know of anyway) – Cheers Barcelona!

Thinking about adding a few top Spanish destinations to your travel plans? Here’s a 12 day itinerary to help you explore the best of Spain.

If you’re headed to Europe here’s a suggested 10 day European itinerary including other places and things to do that shouldn’t be missed during your trip! 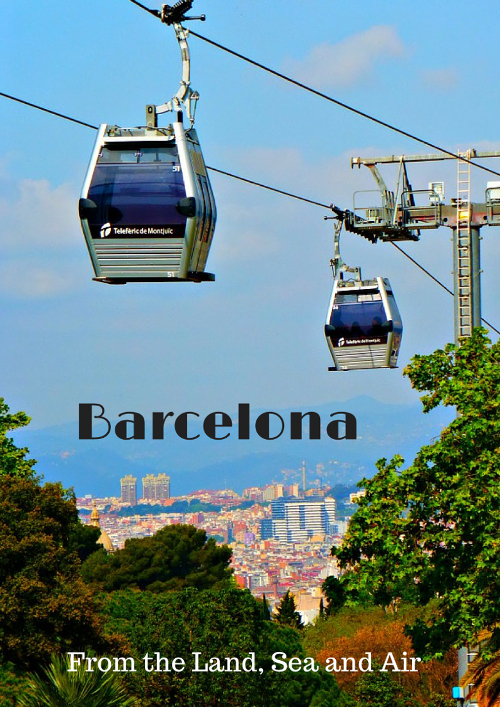 Here are some additional posts about traveling in Europe that you might enjoy!

You Should Devour Barcelona!

The Spain You Don’t Know (But Should) The Pyrenees

Reasons to Visit One of Europe’s Smallest Countries – San Marino

Walks of Italy – The Best Food Tour in Rome

Thank you to Barcelona Cultural Tours for providing us with this experience. As always, our review and stated opinions are our own.

12 thoughts on “Experiencing Barcelona from the Land, Sea and Air”