High above the beaches of Rio De Janeiro sits Santa Teresa, a formerly upper class neighborhood that fell into disrepair after its height in the mid 20th century and is now embraced by artists (and tourists). This district is markedly different from the well-known areas beachside areas of Copacabana and Ipanema. It has a bohemian vibe, with colorful street art scrawled on the walls around every corner, and shops filled with artist crafts so much cooler from the typical tourist souvenirs found by the beach. The neighborhood is also famous for the Bonde, the old school tram line that travels from downtown, over the Carioca Aqueduct in the city center, and climbs up the hill to end its run in Santa Teresa. 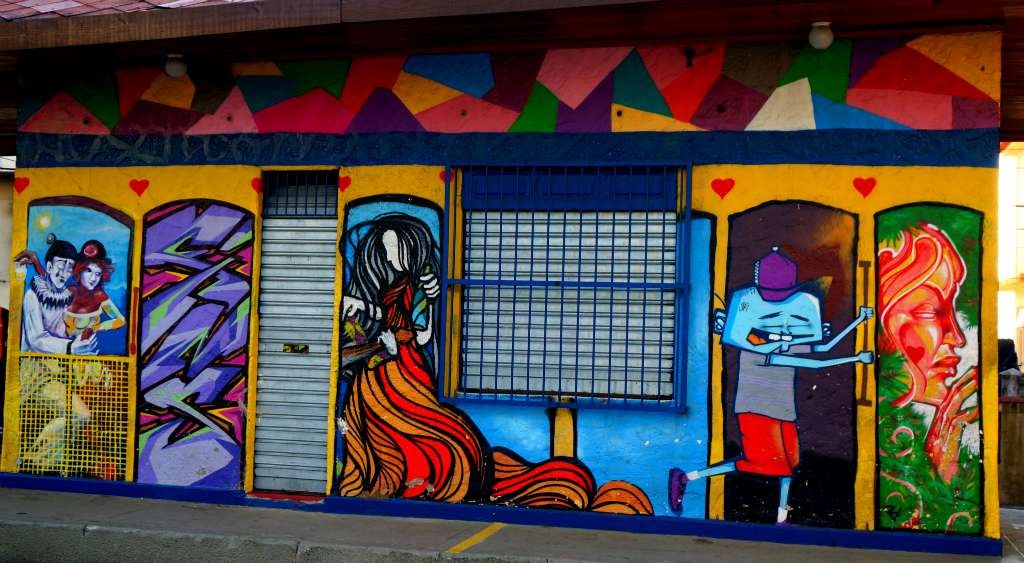 While we had a great time exploring this section of Rio, we really didn’t come to Santa Teresa for the art or the trolley. We needed a change from the meat, rice and beans that dominate typical Brazilian fare.  We came to feast on seafood with an Amazonian twist at a restaurant called Espirito Santa.

We found the restaurant pretty easily – it’s on the main drag, and trolley tracks (which were currently under construction) pass right in front. Once in the front door, a cool and eclectic art collection hanging on the walls stood out immediately. This place had a bold style and attitude that we hoped the flavors would match (and they did). 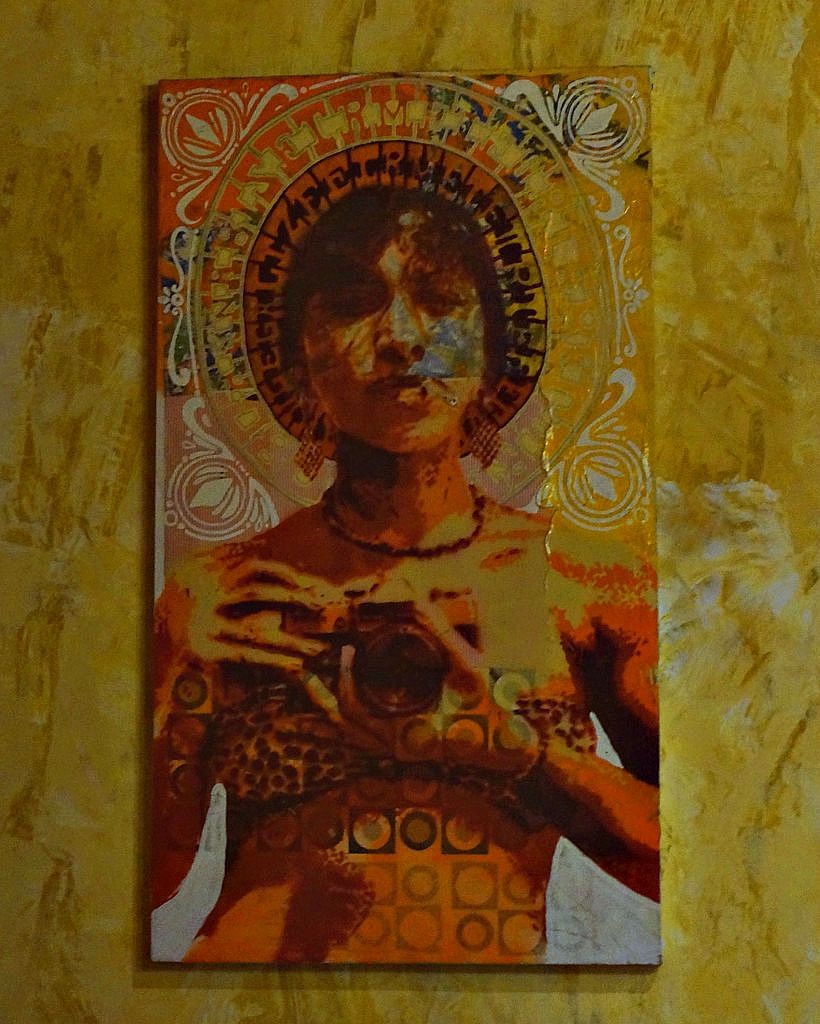 Matt, the Espirito Santa’s owner, greeted us warmly and encouraged us out onto the restaurant’s back porch, which was the popular choice – it’s no wonder with the view. We watched lightning flashes on the hills in the open air of the deck –  until the sky opened up in a torrential tropical downpour. All the diners grabbed their plates and ran inside – I guess we were going to eat in the dining room after all…

Once we were set up with specialty caipirinhas mixed with Amazonian fruit, we chatted with the owner about the restaurant and its history. A transplant from U.S., Matt did what “every guy dreams about” and moved to Rio and opened a bar. It was when they decided to start serving food that things changed. The restaurant took off, Matt said, when executive chef Natacha Fink came in as co-owner. A native of the Brazilian Amazon, she developed a menu sourced from Amazonian ingredients not often found in Rio de Janeiro restaurants, and her fusion of Amazon flavors quickly grabbed the taste buds of locals and visitors alike.

I’ll be honest – the menu was just slightly daunting, with so many unfamiliar ingredients. But, we were hungry, and ready to be adventurous: we decided (with recommendations from Matt and the staff) on a smattering of appetizers so we could sample as many different things as possible. And, we were not in the least disappointed. Below are the highlights. 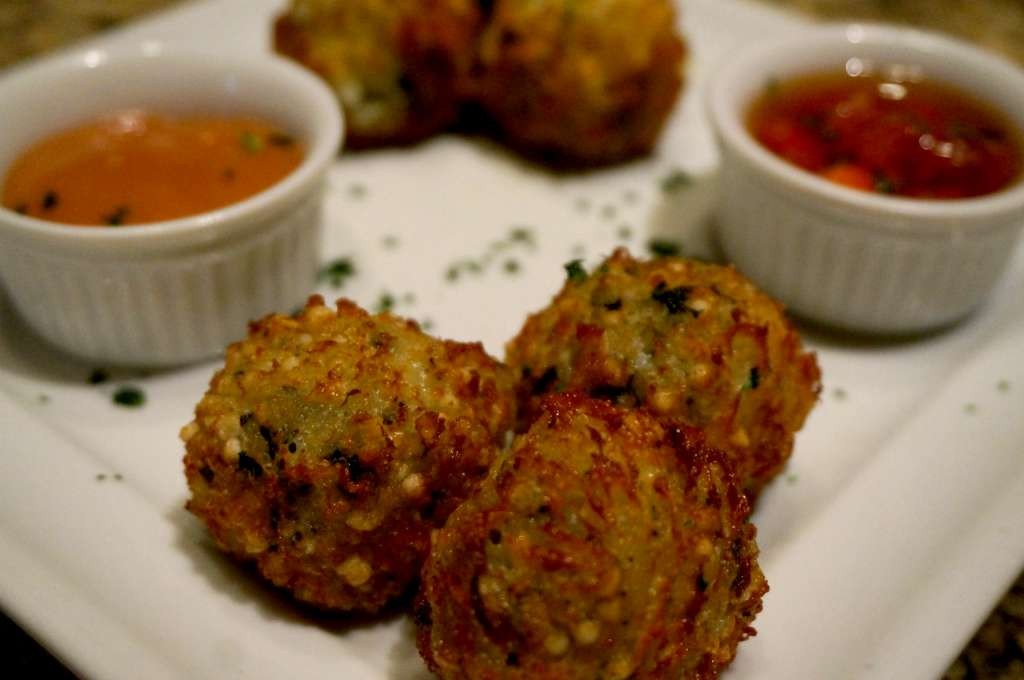 The fritters made with Parmesan cheese and tapioca or manioc flour (a staple you find everywhere in Brazil that gives the fritters a tender texture) were Jen’s favorite of the night. 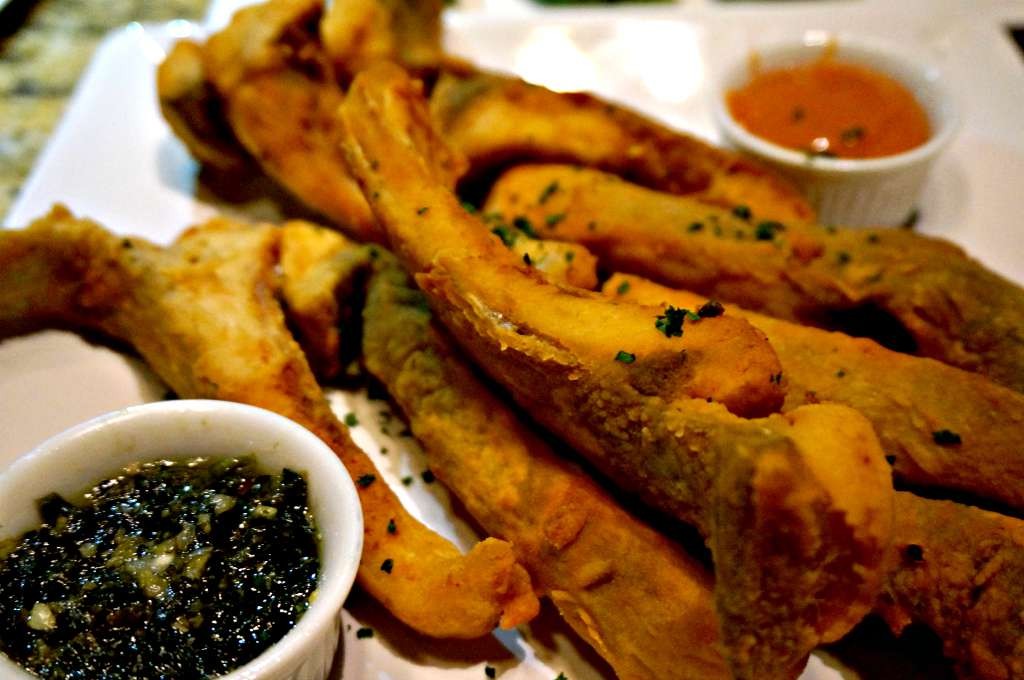 Costelinhas de tambaqui: Fresh water tambaqui ribs. What’s a tambaqui, you ask? It’s a fresh water fish from the Amazon, that can grow to huge proportions. I’m used to pork and beef ribs, not fish ribs – and this were Fred Flintstone sized ribs from a fish. They were simple and meaty, battered and deep fried and served with a jambu (amazonian herb) pesto which enhanced the flavor of the white fish. 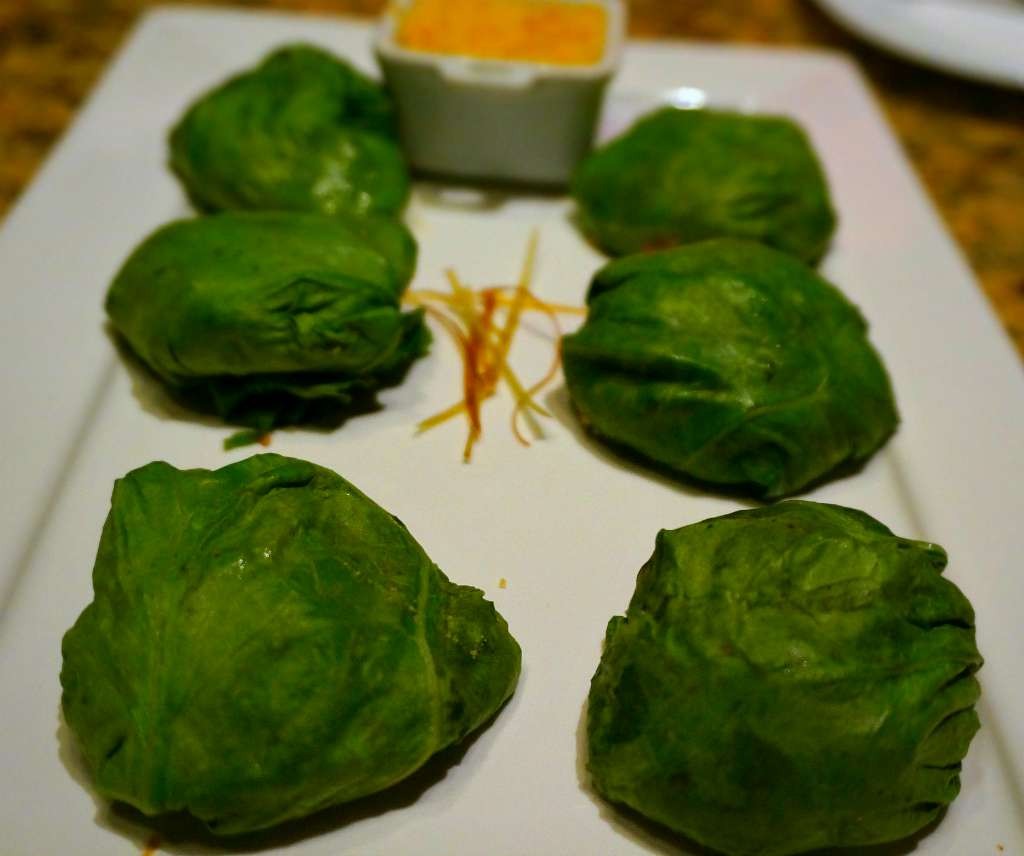 Trouxinhas de Axé are steamed collard green leaves with Bahian shrimp stuffing. This picture doesn’t do justice to the incredible flavor of the collard greens offset by the sweet and spicy shrimp mixture hidden within. These were my favorite for the night, and I came close to licking the plate. 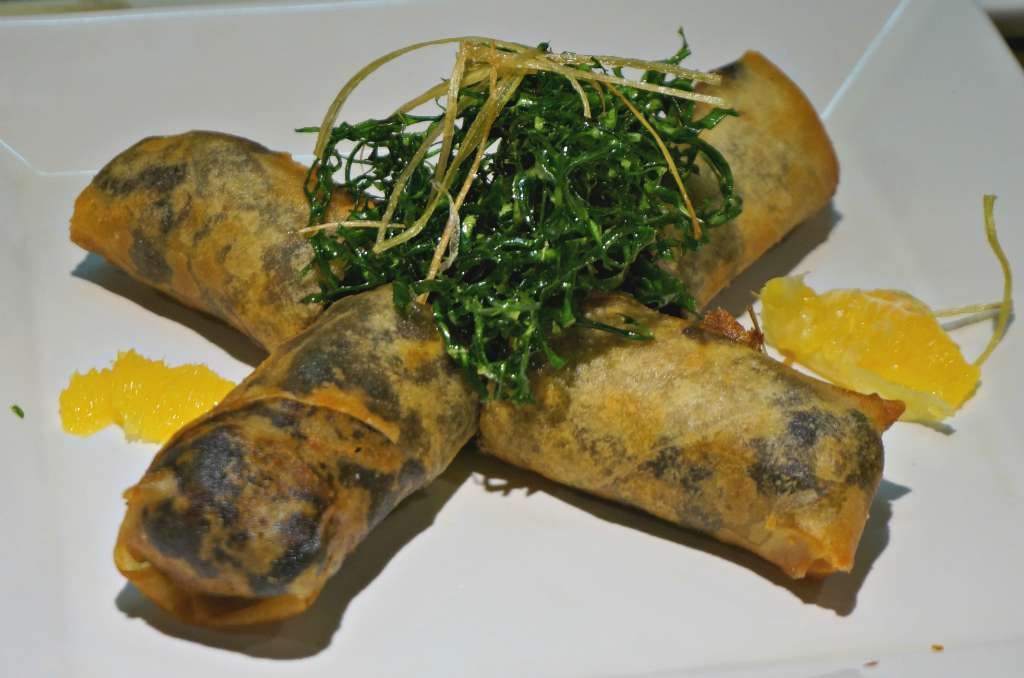 The feijoada de rolo is take on the classic bean Brazilian dish Feijoada. In this case, crispy spring rolls are filled with the bean and meat stew that is “the” thing to eat in this city. 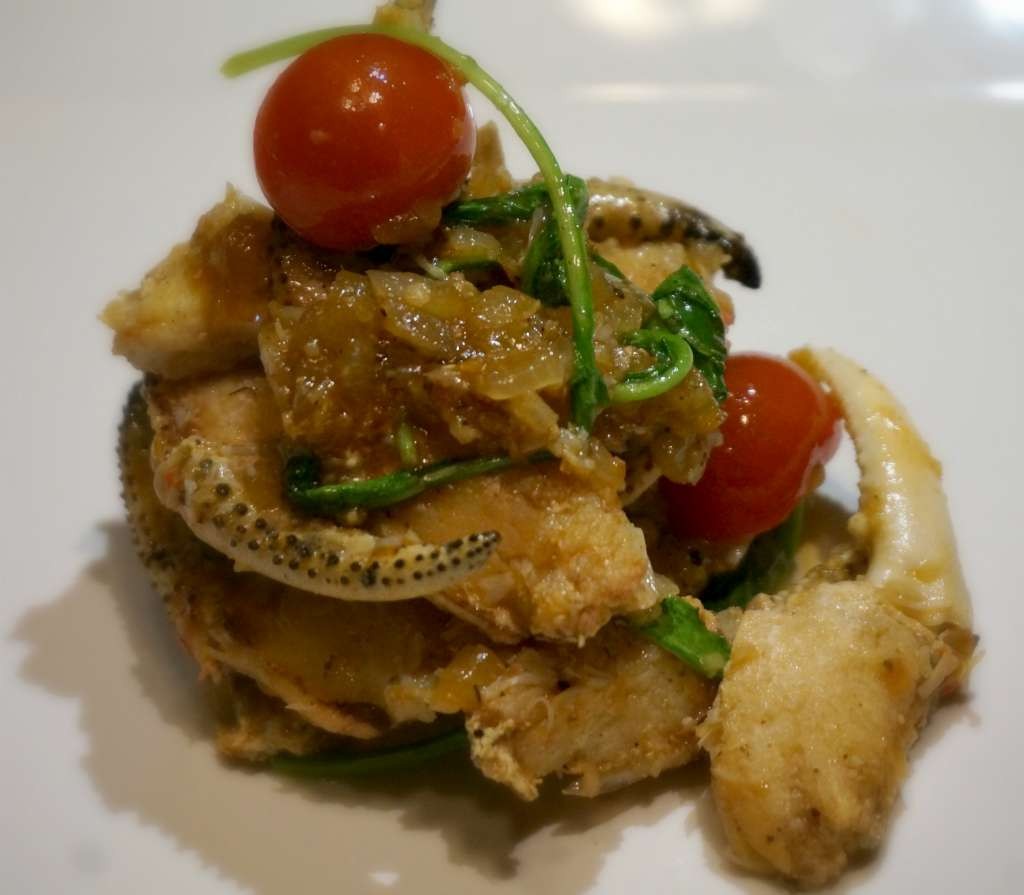 Patinhas de Caranguejo means simply “crab claws”. This pile of crab claws in a light batter with a tangy sauce was beautiful to look at as well as delicious. 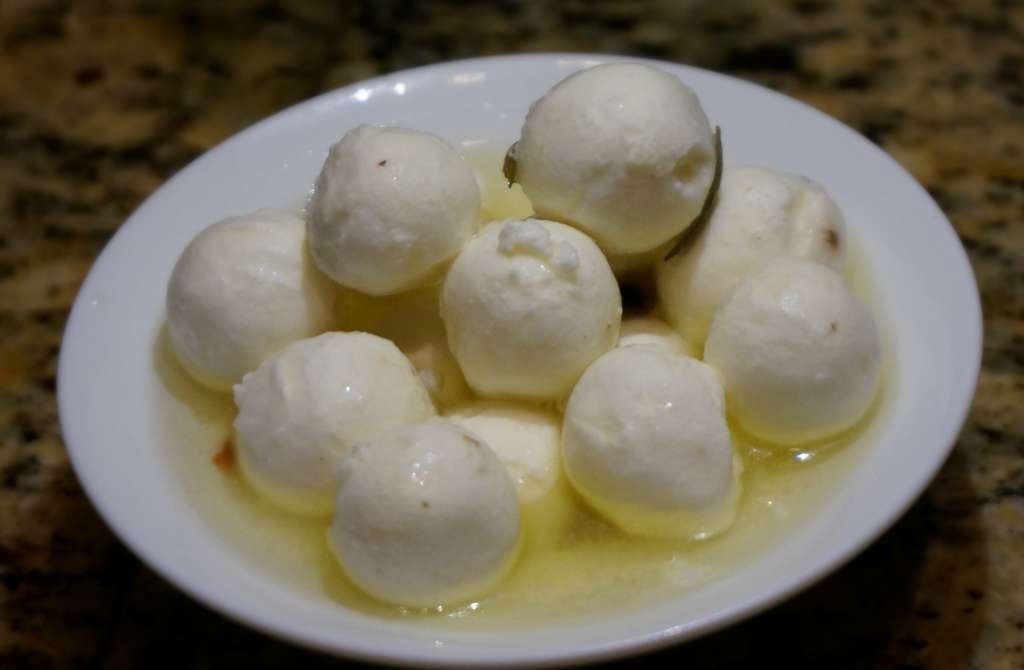 We finished with some soft locally sourced goat cheese, usually part of an appetizer called a Couvert, that had a mild flavor and which was a perfect last bite.

If you haven’t been to Brazil, you need to know that portions are always generous. Throughout our stay, we would typically split an entree and that would still be more than enough for us. Our plan for this night’s dinner of “eating lightly” with appetizers only wasn’t a complete success – we both left overly stuffed (but very happily so), having tried some amazing and unique dishes.

A special thanks to Espirito Santa for hosting us for this amazing dinner. As always, our opinions are our own.

Related articles about food and adventures in Rio de Janeiro you might enjoy:

Kites and Satellites – The Favelas of Rio

The Best Sights of Rio by Bike 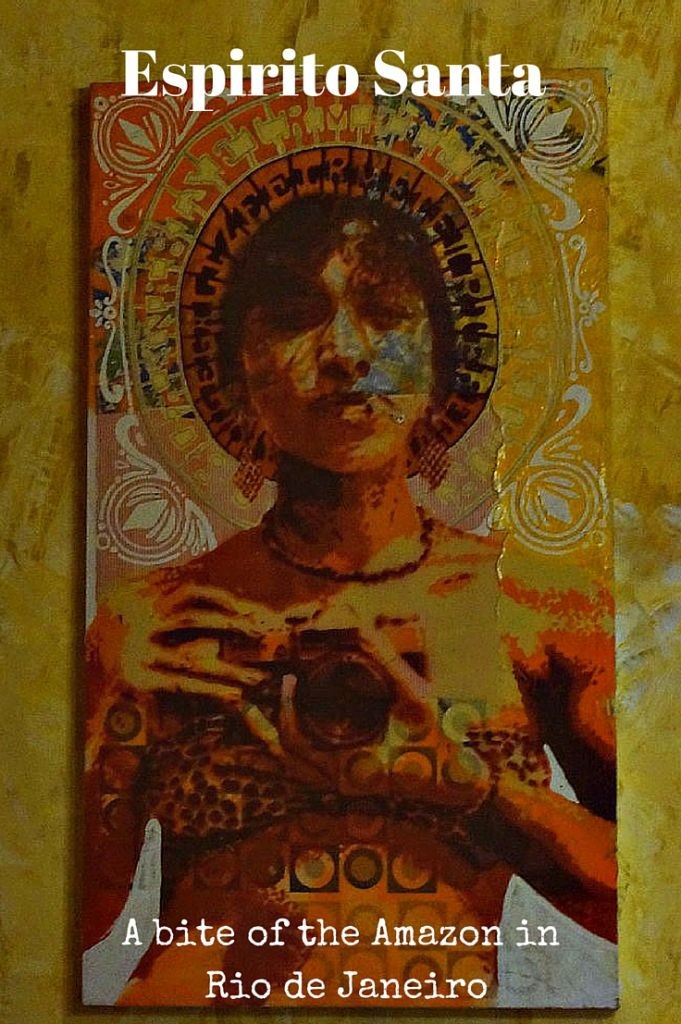 Oh love Rio. Didnt stop by that neighbourhood though. Sounds like great food.

It's worth getting a little of the beaten track to go there - the food is wonderful and it's a great place to wander around for the afternoon.

I am not going to lie, but those dishes look absolutely delicious. I like that they are unique from the mainstream Brazilian cuisine. Also, love the art, especially those with vibrant colors.

Wow that is new to me, meaty fish ribs! All the food and appetizer plates look so delicious. I'll have to keep this in mind when I visit the area.

Brazil is so high on our bucketlist (along with so many other countries in South America!). I love the colourful street art of the neighbourhood, and the Tapioca Parmesan Fritters look (and sound) delicious!

We were pleasantly surprised with the quality of the food in Brazil. And the fritters were incredible.

Wow I love trying different cuisines those food photos looks amazingly delicious. I would love to try them