During a recent visit to Dubrovnik, Croatia, we were enticed by the sight of the Dubrovnik cable car running up to the top of Mount Srd (or Srd Hill). The enormous hill is a backdrop looking above the city. It’s also the home of the Dubrovnik Imperial Fortress which was famously built by Napoleon.

We imagined the stunning views from the top of the hill. The question was, should we hike to the top, or ride on the Dubrovnic cable car? After considering the toll that the many evenings enjoying Croatia’s wonderful food and wine had taken on our waistlines, we decided it would be best to hike. Sounds easy enough, but as it turns out, not so much. 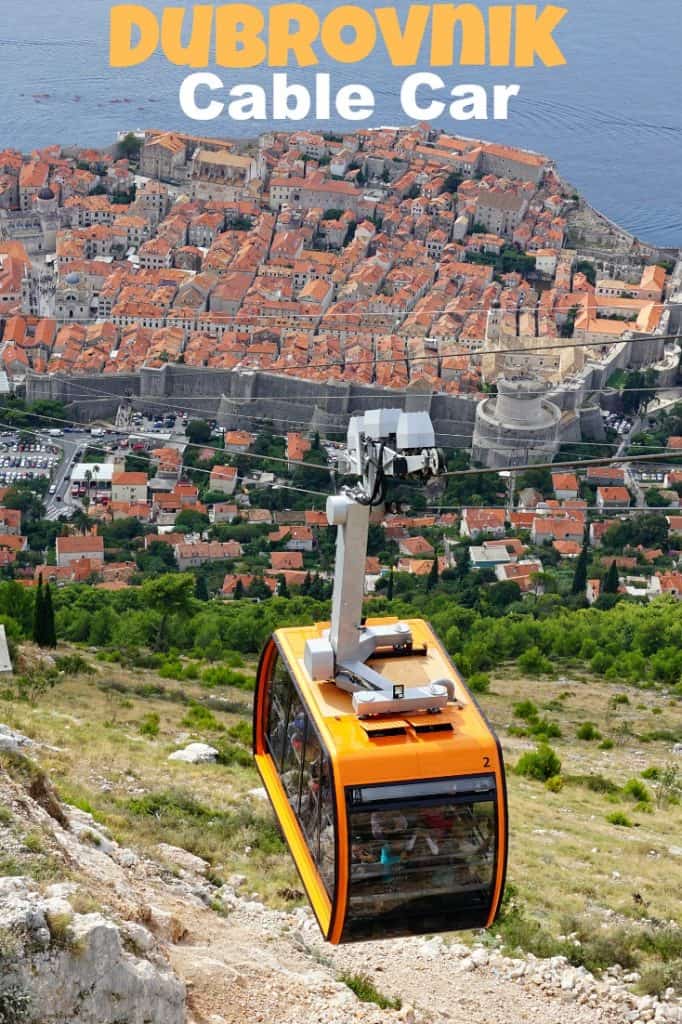 Stairways leading to Srd hill beneath the Dubrovnik cable car are pretty easy to find. The stairways climb up the hillside through a residential area and then abruptly stop.

We couldn’t find signs for the trail head anywhere. So despite our good intentions, we ended up grabbing a ride on the cable car to the top of Mount Srd. During the ride up we figured we’d see the trail and at least make our way down. Again, not so much.

Taking the Dubrovnik Cable Car to the Top of Mount Srd 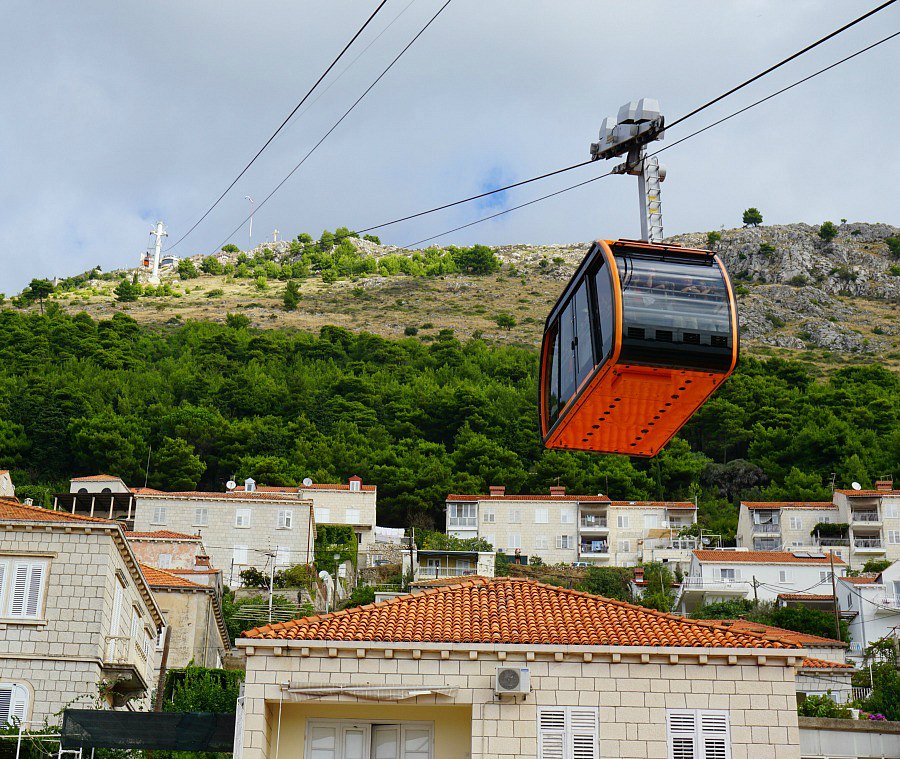 Dubrovnik Cable Car to the Top of Mount Srd

The ride to the top is just a few minutes long. I anticipated taking in beautiful views along the way, but the car gets pretty packed. And being only 5’1″, my view was limited to the backs of strangers heads.

What I also didn’t catch sight of was the hiking trail for our trip down. Note:  you can buy a one way ticket, round trip ticket, and also tickets that includes a tour of the Croatian Homeland War Museum housed inside of the Imperial Fortress at the top.

The Top of Mount Srd

The view is the main attraction at the top of Mount Srd. And seeing Dubrovnik from above is definitely worth the price of the ticket to get there. Despite it being prime tourist season in Dubrovnik, the scene at the top wasn’t overly crowded.

People seem to take the ride up to the top, grab a quickly selfie, and head back down to explore Dubrovnik’s historic city center.

But there are other things to do on the top, such as grab a bite at the restaurant with a gorgeous panoramic view. It is aptly named the Panorama Bar and Restaurant.

There’s also a company selling dune buggy tours as well as the war museum, which is where we headed off to after snapping a few photos of our own. 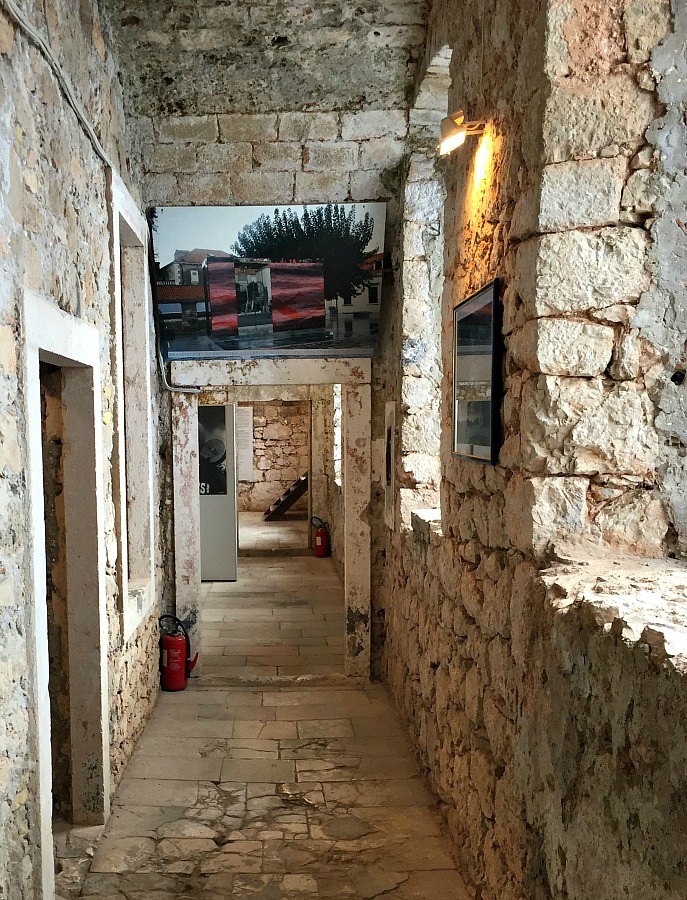 The museum, also known as The museum of the Croatian War for Independence is was mostly a heartbreaking photo essay describing the events of the civil war. The war eventually led to the breakup of Yugoslavia into the Balkan States countries that were originally bound together after WWI.

The events that occurred during the war, from 1991 – 1995 are displayed on the walls of the old fortress. Damage from the war are still visible and add to the impact of the stirring images. Photos of the young soldiers and a map of damage to the area were the ones that remain with me the most.

Find some great deals on flights and hotels! 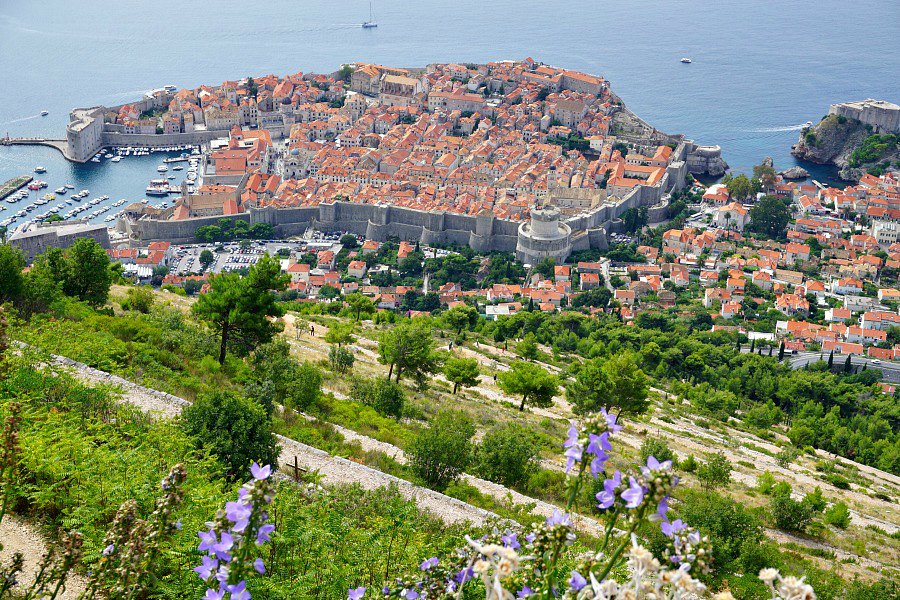 We found the hiking trail while peering down from the wall surrounding the museum. As it turns out, the trail runs down the side of the hill that is mostly out of view of the cable car. The views from the trail were some of the best of our visit. 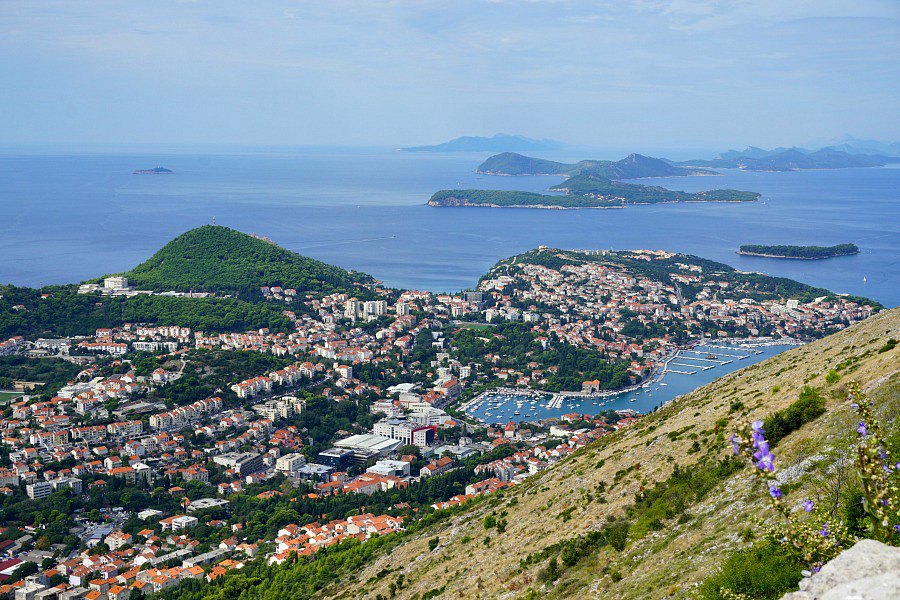 View of Dubrovnik’s Harbor from the Mt. Srd Trail

That said, the trail was covered with large loose stones that made hiking difficult. And there isn’t much shade along the way, so plenty of water and good hiking shoes are highly recommended. 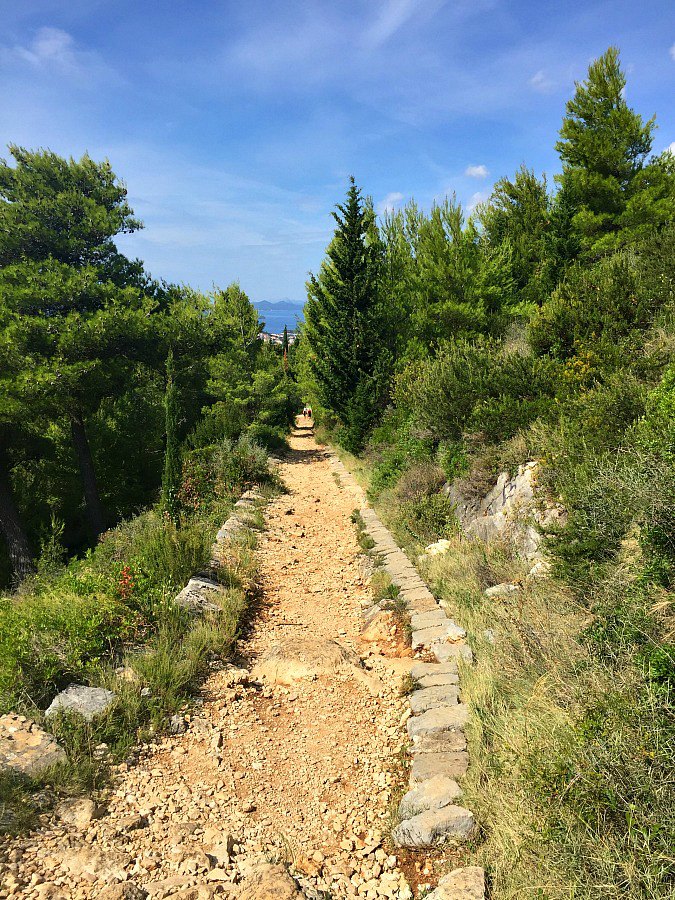 The trail switches back and forth, so it’s not too steep. And there are metal sculptures depicting the signs of the cross at the end of each segment. A nice reward for making it over the rough terrain. 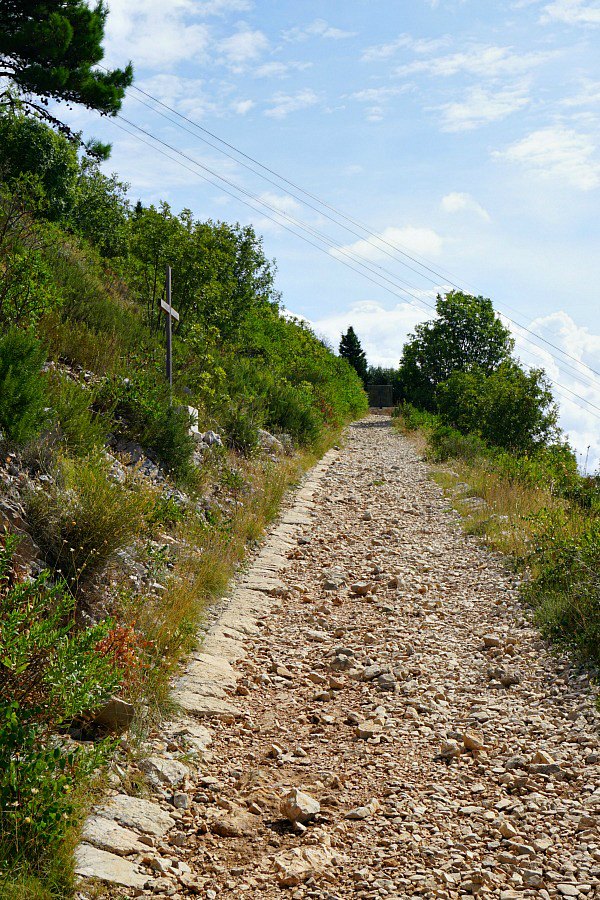 As it turns out, the trail head isn’t all that far from the cable car entrance. You just need to know where to look. 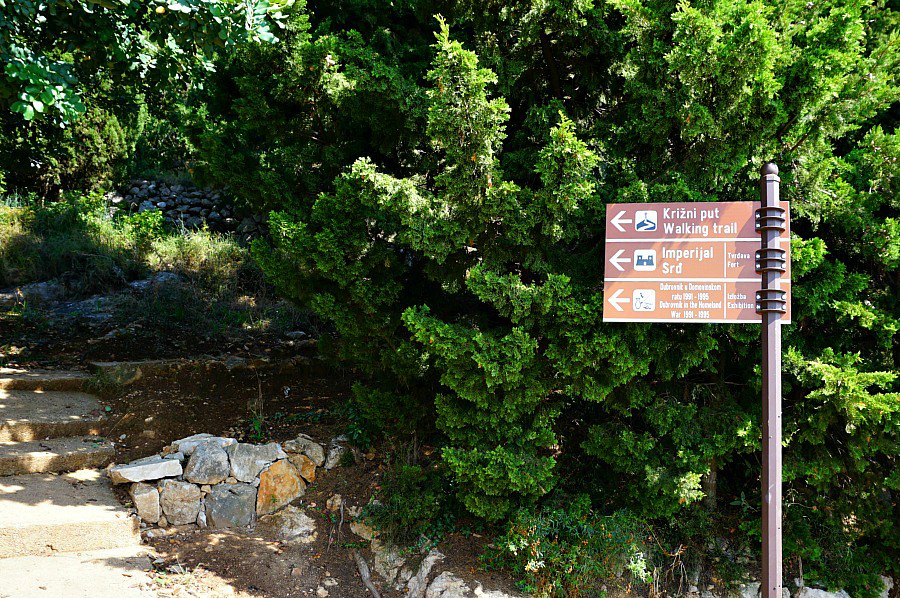 The Mt. Srd Hiking Trail entrance is located on Jadranska Cesta, just west of the tunnel on the freeway. The hike down took about 40 minutes. While I probably wouldn’t do it again because of the loose rocks, I’m very glad we made the trek. If only to justify the huge dinner and more Croatian wine that we enjoyed as a reward for making the journey. Hi Jen We've just done the walk up Mt Srd and found your comments very helpful. There's an alternate walking route which we stumbled upon as an alternative way back down to the Old City (or vice versa). From the bottom, you walk to the end of the street Put od Bosanke which turns to a no vehicle road/track and then continues up some newly constructed steps, which cross UNDER the motorway. The path then leads up some older steps up the side of the hill arriving just near the village of Bosanka, and turn left onto the road that leads to the peak of Mt Srd. Probably also about a 45 minute trip. You get great views of Dubrovnik Old City from the south side, including the marina!

Thanks for the great info!

Hi Jen, loved your travel diary. You are an amazing writer; thank you for sharing. Quick question, how long did it take you to walk down from Mt Srd? Our time is limited, but you have sold the hike! :)

Thank you Tamara! You made my day. The hike is fantastic and well worth the time. It takes under and hour and the views are spectacular. Jen

[…] We had to cancel our day and a half in Dubrovnik due to being sick in Bosnia. But, if we had gone to Dubrovnik, our plan was to walk up Mt Srd for great views of the city and the sea.Â It is possible to take the cable car up and walk down.Â  […]

Yes you can absolutely take the cable car up and walk down.

I am visiting in October 2018 and plan to do this trip during my visit. Thanks for the article! By the way, what is the weather like at that time of year?

Dannie & Nev from the UK

So glad the article has been helpful! If you have time, consider visiting Ston https://www.venturists.net/oysters-walls-ston-croatia/ Have a fantastic time. Jen