When we told people that we planned to spend a month in Lima, Peru, we got more than a few raised eyebrows.

The same was true when we first arrived and mentioned to some locals that we planned to visit for a month. A month?

Many people look at Lima as a place to stay on route to Cusco and the famed Inca Trail to Machu Picchu.

While we do plan to make it to the lost city of the Incas, we thought we’d spend some extra time in Lima, uncovering charms that some people consider lost or missing.

We stayed in the upscale touristy Miraflores area and were already impressed by the beautifully landscaped coastline and art in that area.

See our story about the bike tour we took of the area to see what I mean.

The next stop on our list – Lima’s downtown. We weren’t sure what we would find there. Would it be rundown and gritty, full of beautiful buildings, interesting a quirky?

As it turns out, all of the above. 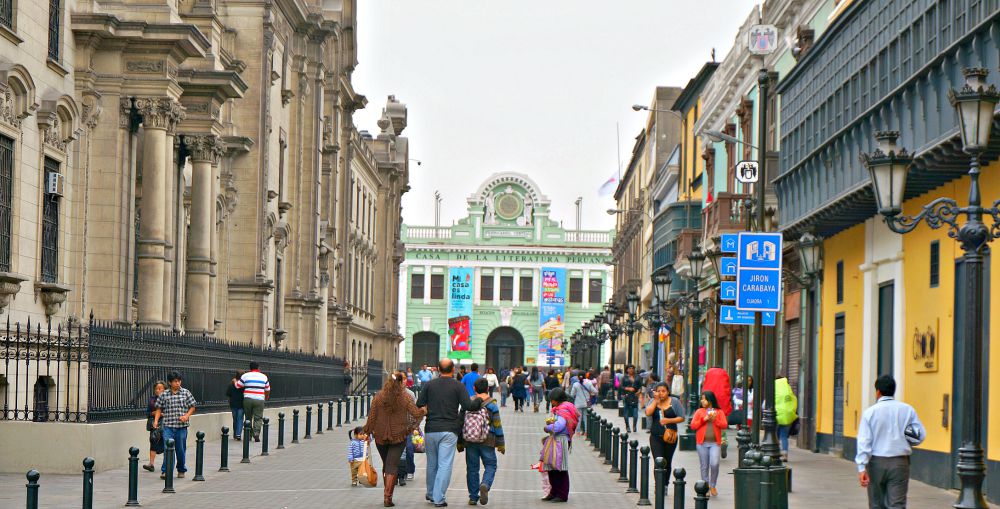 One of many colorful pedestrian street in  downtown Lima

We decided to put ourselves in expert hands and joined a tour with Lima Urban Adventures. They specialize in providing tours lead by locals – which is always a fantastic way to get a good first glimpse into new place.

We started with a walk down the busy commercial street until we arrived at  Plaza Mayor, or Plaza de Armas. This grand central square is enclosed by white granite buildings and holds a large fountain at its center.

It is also home to the Government Palace, the Archbishops Palace and the cathedral of Lima. This area was once considered the “Paris of South America.”

Wealthy businessmen flocked to Lima in the 17th and 18th centuries and the city prospered as a center of commerce and trade.

The infusion of wealth gave rise to many lovely buildings outside of the main square, including ornately carved churches.

One main feature in the downtown area is the lovely balconies (1600 in total) some carved from mahogany or cedar wood.

Restoration work is underway to preserve them, although their necessity is in questions. They used to be the place where women could watch the activities below, without having to mingle with the men on the streets.

You can just imagine the sneaky things that would happen in order to entice them down from their perches. 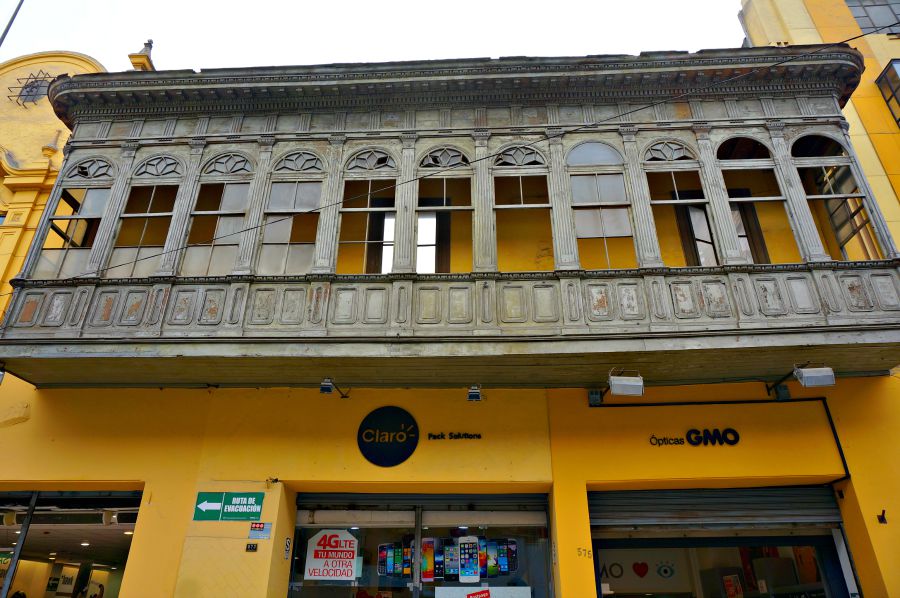 Wooden balconies are on buildings throughout downtown Lima 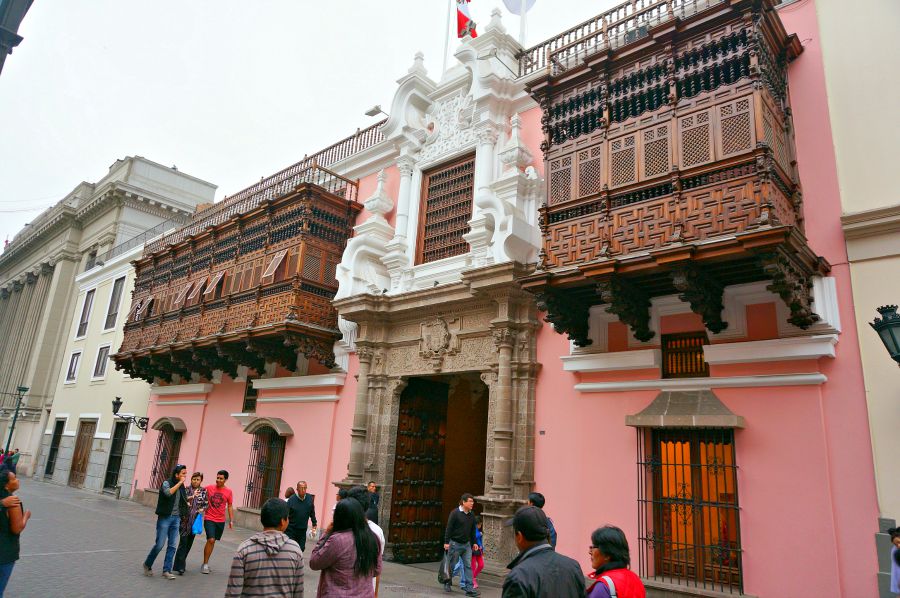 Ornate balconies giving personality to the buildings throughout the city center.

Don’t forget to pin or bookmark the article for later! 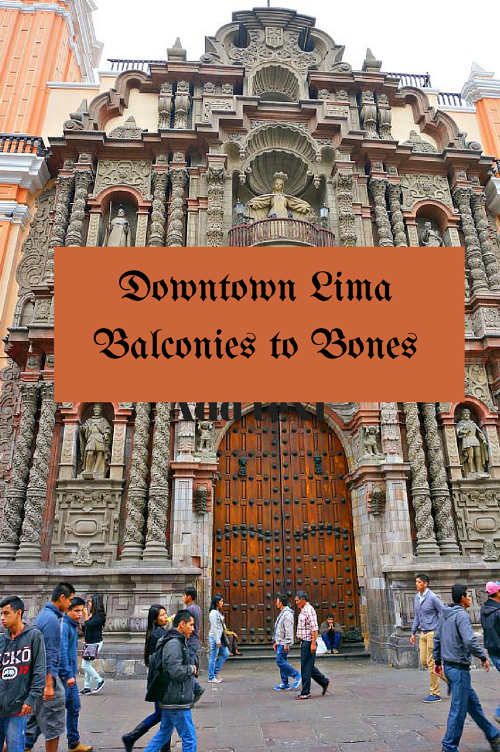 Wandering by the central market, we discovered Lima’s vibrant Chinatown area. Chinese workers were brought to Peru by the Spanish in order to work in agriculture in the 16th century.

Today many of their descendants are merchants and restaurant owners who do a thriving business close to the central market. 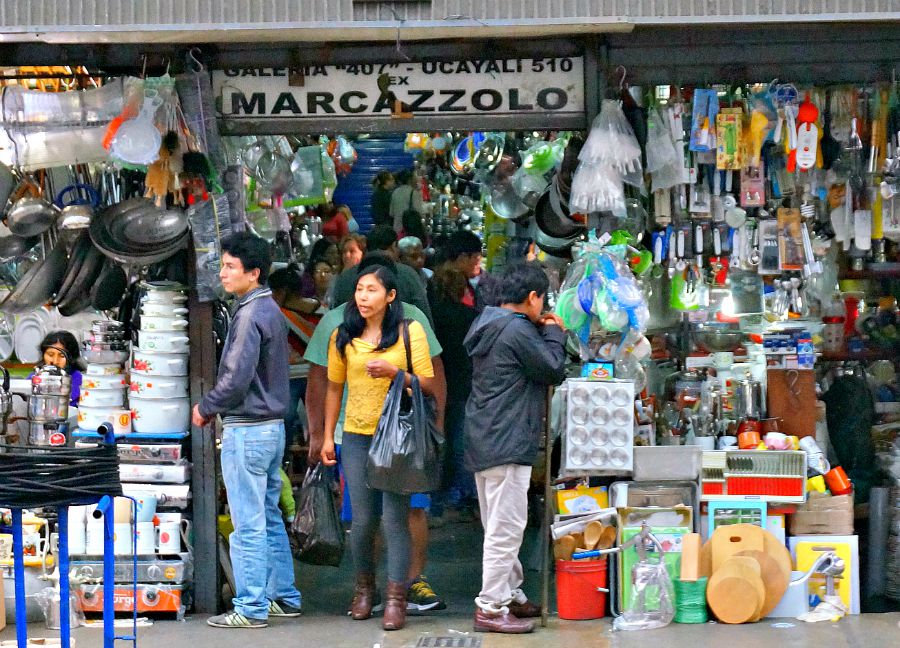 From the streets of near Chinatown you can see Lima’s growing population spreading up the hillside. Some of the homes from this impoverished sector lack running water or electricity. 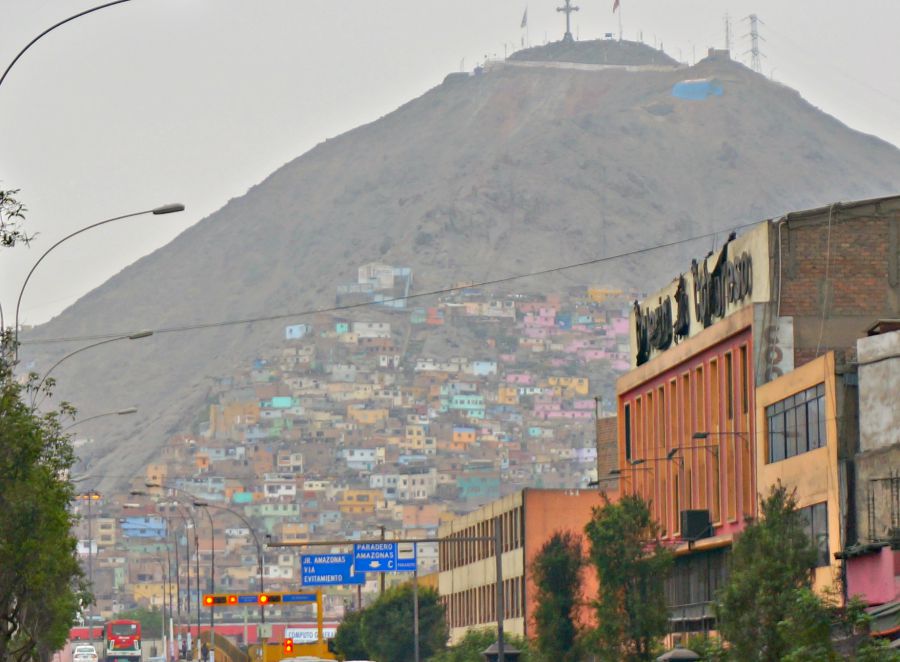 Housing spreading up the side of the hill outside of downtown

There are some social programs set up to assist the poor, including a soup kitchen in the San Francisco church. It was here that we found some of our most interesting discoveries.

The San Francisco church is brightly painted in red and white (the colors of Lima). The church houses many treasures, including a portion of the ceiling of the building itself.

The ceiling is a mahogany jigsaw puzzle of thousands of pieces that have withstood many of Lima’s earthquakes. But it is what lies below the church that is more intriguing.

Here you will find the remains of over 25,000 people who were put to rest in what was Lima’s first cemetery. From under the church you can wander through the catacombs viewing bones that have been rather eerily arranged, while listening to the sermons above. 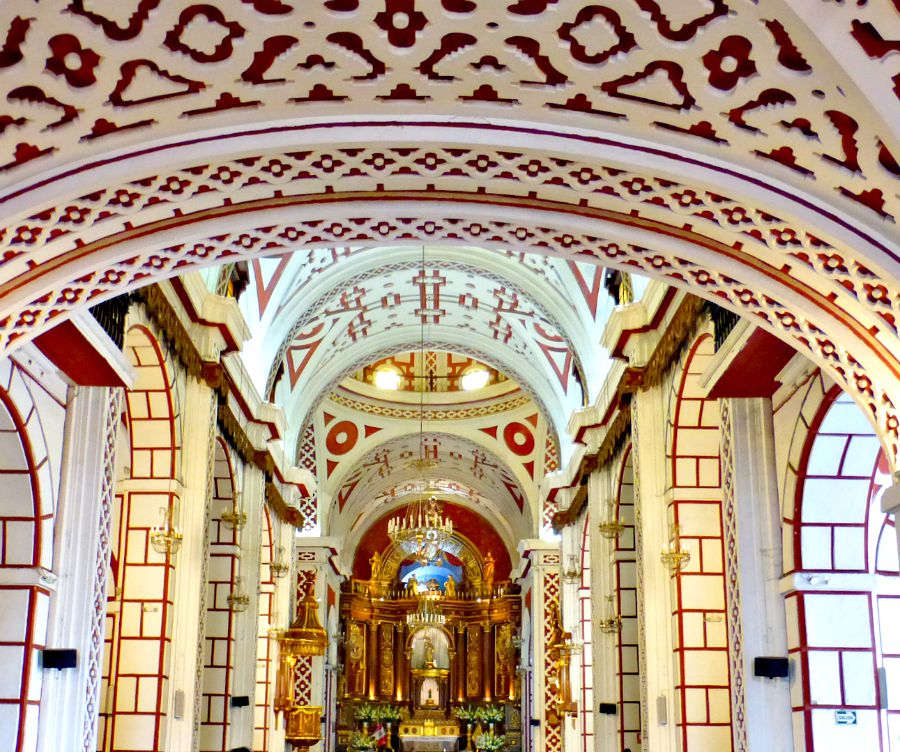 We’ve visited catacombs in other areas of the world, including Rome, Sicily and outside of Lisbon, Portugal, and it is always an awe inspiring experience. 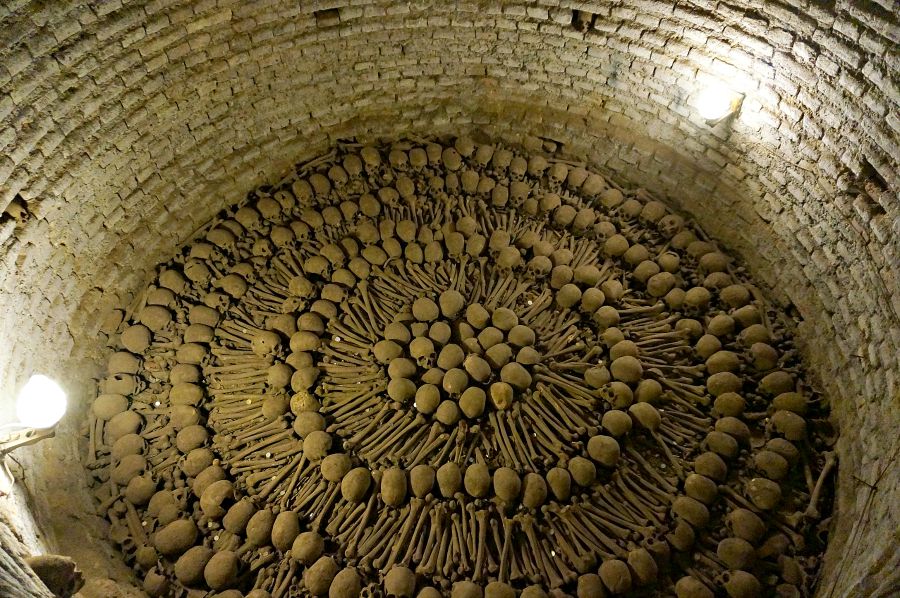 Our last stop of the day was reserved for Lima’s famous drink – the Pisco Sour. The cocktail was actually created by an American Bartender from California who opened a bar in Lima in the early 1900’s.

That doesn’t seem to deter the Peruvians from proudly proclaiming it their national drink. It was sweet, sour, and unlike anything I have ever experienced before. Much like Lima itself. 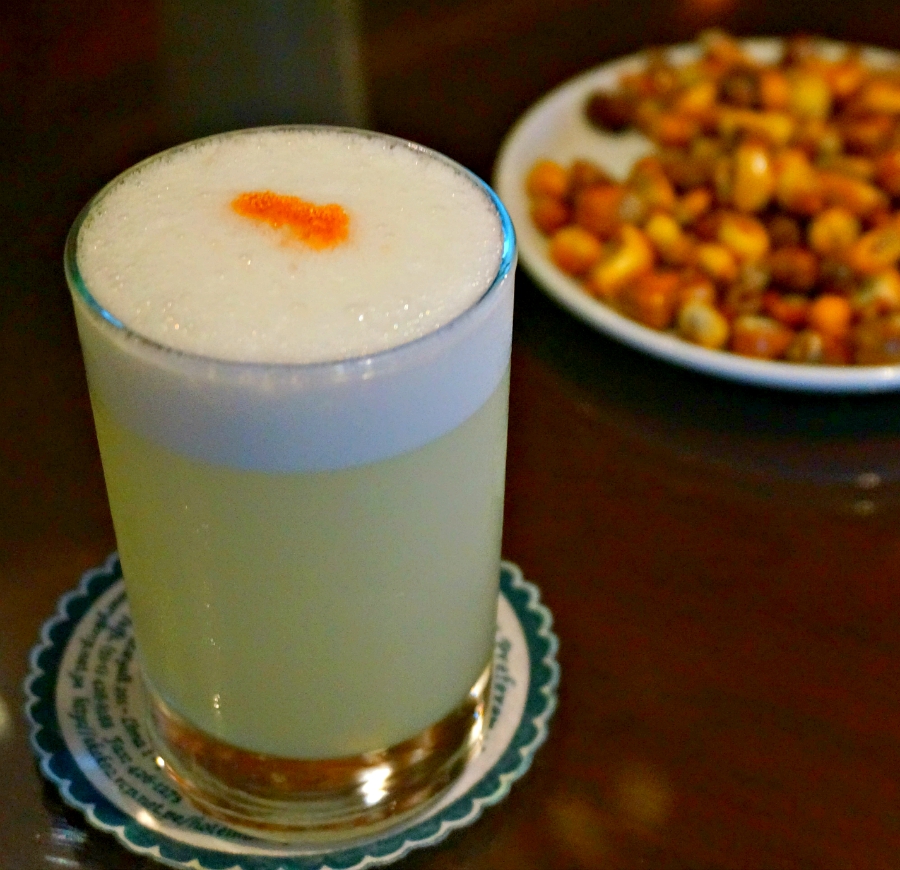 As we left, we were treated to one more glimpse of Lima that gave us all the more reason to want to come back and discover more. Lima at night! 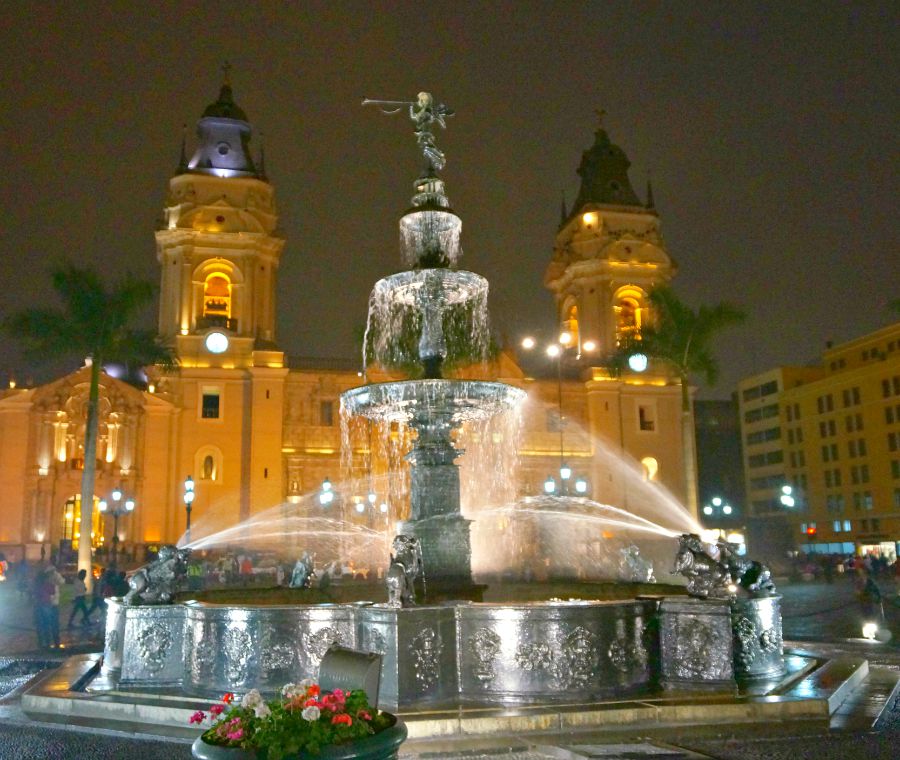 If you do find yourself in Lima, I recommend that you stay a while and uncover the many sides of this intriguing place.

We were able to discover many of the stories and sights in downtown with the assistance of our friends at Lima Urban Adventures (who provided us with a tour). As always, our opinions are our own.

Here are a few related articles about the sights and flavors Peru: […] laid to rest with many of their bones above ground. Some travel bloggers who visited Lima are Sean & Jen from Venturists.net and Julie from […]

Thanks for linking to the post. I hope it helps other people discover the beauty of Lima.

I visited Lima last summer and your blog took me back to some fascinating memories there. The catacombs are incredibly intriguing (and creepy), as well as the architecture throughout the city. I didn't make it to the Chinatown area, but I was glad you mentioned the detail about how immigrant workers from Asia had an influence on the culture in Lima.

I'm glad there is more information out there about all of the wonderful things to see in Lima - I'm glad you enjoyed your visit too.

Now that you are there do not miss Manu Biosphere Reserve, you'll love it.

I really enjoyed my time in Lima and thought it was very beautiful. The only think I didn't like was the traffic. It was ridiculous! And if you liked the balconies there, I think you'll really like the ones in Cusco.