Let me be controversial: Machu Picchu is not the most impressive place to visit in Peru. I spent four days hiking the Inca Trail hike to the lost city of the Incas, and I can absolutely recommend the experience. But in the end, some of the most remarkable sights in the area were on the streets and the surrounding city that is the gateway to Machu Picchu. Cusco (or as the it was known to the ancient Incas, Qosqo) was the former center of the Inca civilization, and has its own magic,  legends and traditions that many people miss as they trip over themselves to make it to Machu Picchu. That’s a mistake. 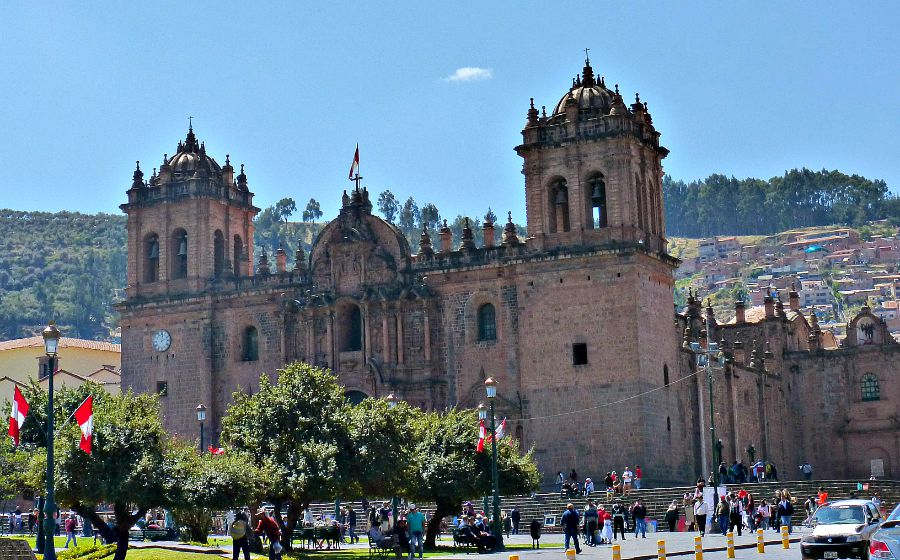 You can imagine what the Spanish Conquistadors first thought when arrived in the new world and found the indigenous people and their palaces adorned in the gold and silver. Well, it doesn’t take long to figure out what was on their minds, since they returned a few years later and took the glittering metal back to Spain for themselves. Some of the buildings in Cusco were removed by the Spanish and replaced by the colonial structures which are admittedly quite impressive. But as you travel around Cusco you can still find examples of buildings constructed by the Incas. Those superior structures are made of hand-carved stones that fit together so well no mortar was necessary to bind them together. Peruvians are quite proud of that fact and of their heritage. In fact, many traditions and customs from Inca times live on today. Many people continue to worship mother earth and to consider themselves the children of the sun. Around one corner you can find a family cooking potatoes in a dirt oven like they have for hundreds of years. Around another there are modern restaurants preparing dishes that are making Peru known as one of the world top foodie destination. Being able to witness both ancient and modern thriving in the same place is part of what gives Cusco its charm. 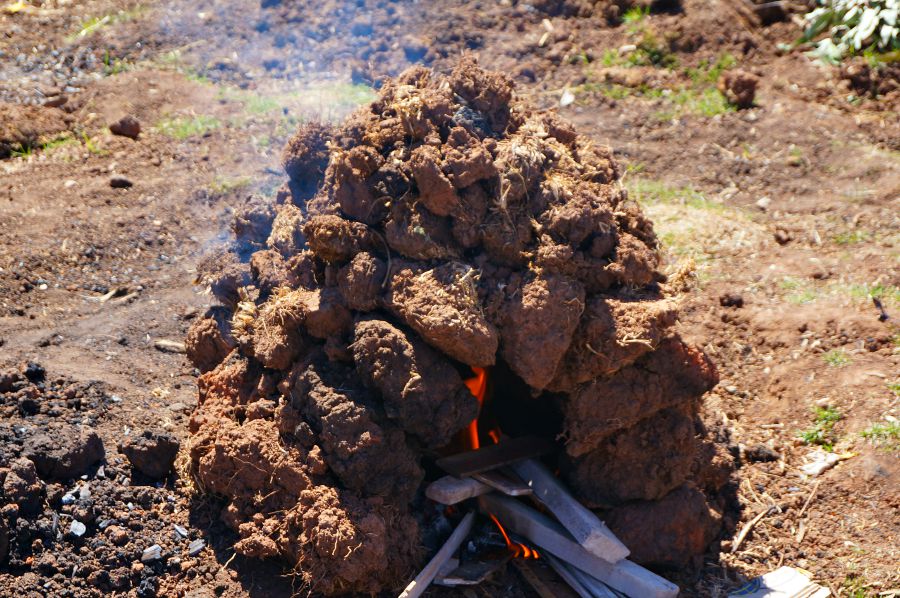 Families gather clumps of dirt and grass to fashion a make-shift oven for a Sunday picnic.

San Pedro Market is the perfect place to find examples of where ancient traditions and modern life intermingle. It’s also the place to find bargain prices just outside of the tourist shops in the city center. In the public market, there are traditional medicine stalls where you can get a mixture of herbs to treat whatever ails you, just like the Indigenous (Quechua) people have been doing for centuries. 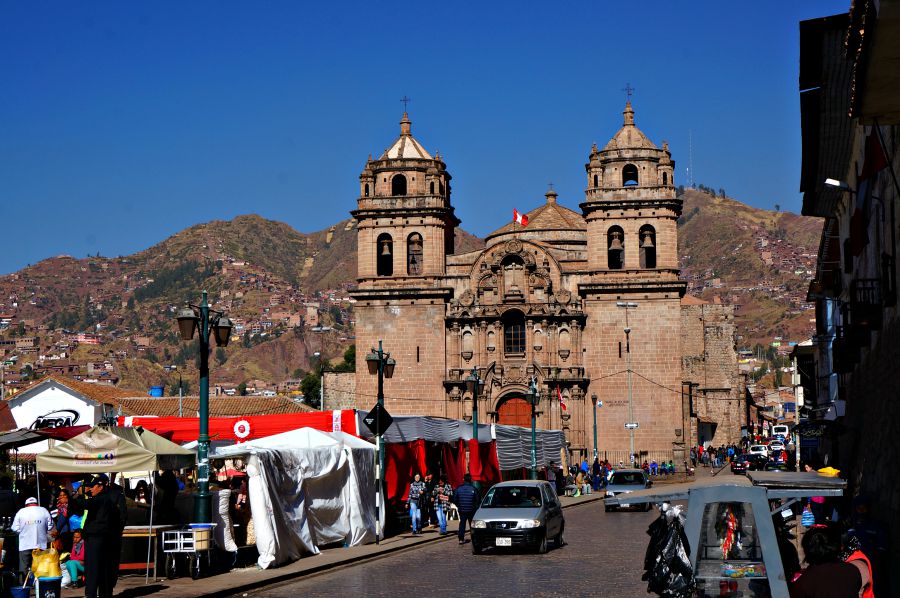 There are traditional breads in the market that have been baked the same way for generations. 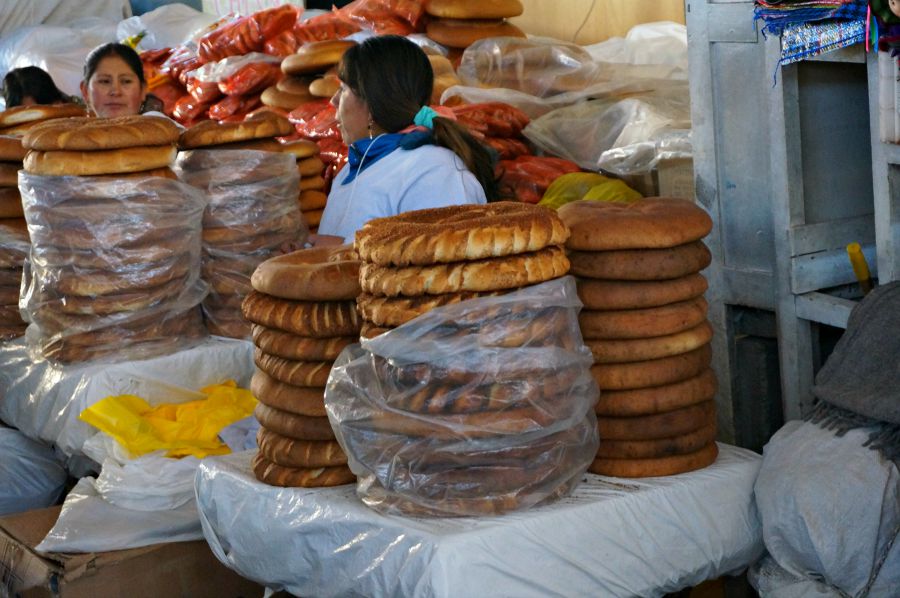 Sun dried potatoes reportedly retain their nutritional value and edibility for 10 plus years. I can’t vouch for the flavor, but the porters we hiked with on the Inca Trail ate soup made of these potatoes every day and ran circles around me. 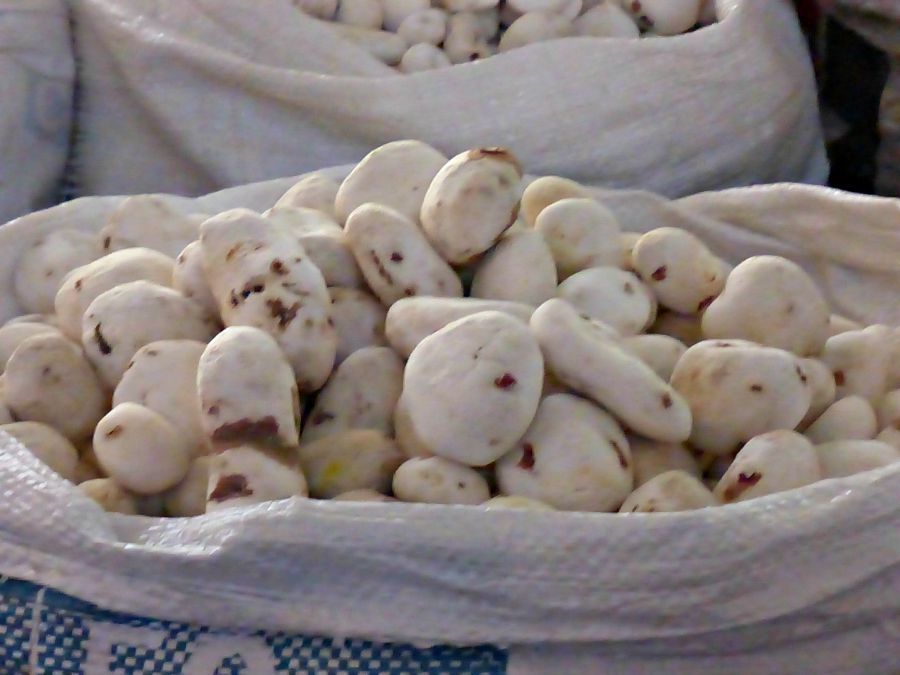 The famous Peruvian chocolate is sold here at about 5 soles a bar for the 60% cacao (pure cocoa) version – about $1.5 US. 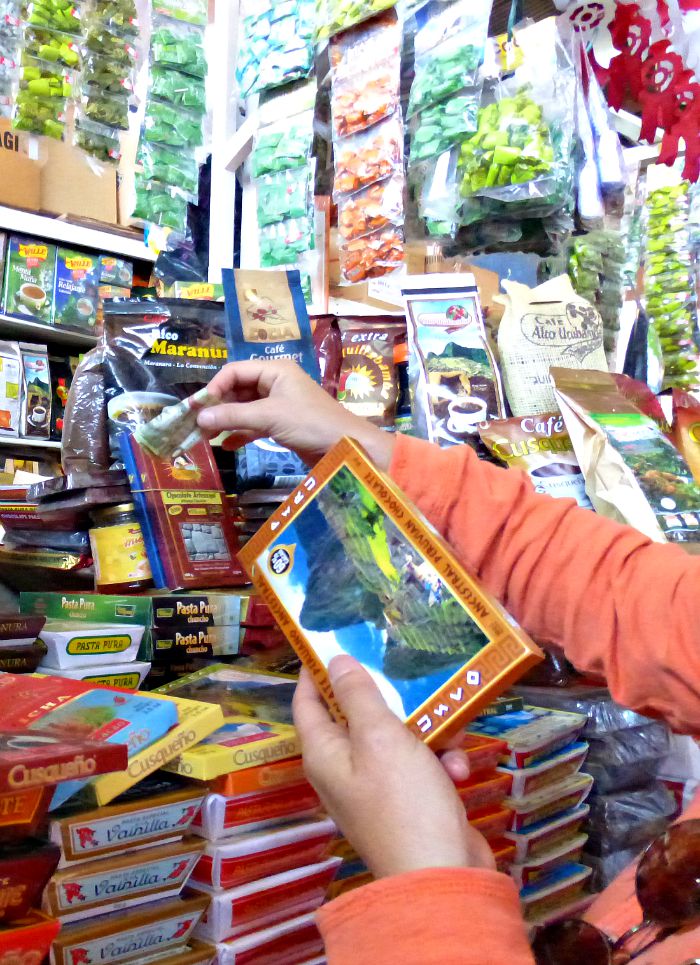 Does chocolate taste better when it is less expensive? I think so!

Knit hats go for 10 soles (about $3 US) for the cotton version instead of 30 soles in the tourist shops. It was well worth the short walk outside of the center of Cusco for both the bargains and the ability to interact with the locals. (Hint – we toured the market with a local guide from Cusco Urban Adventures who helped us find the bargains, communicate with locals and purchase some wonderful fruits and tamales for later in the day).

Beyond the beauty of colonial Cusco, with its narrow cobbled streets, ornate churches and vibrant market, is one of the most astonishing sights in Cusco, the ancient ruins of Sacsayhuaman. Having trouble pronouncing it? Locals suggested we just say “sexy woman” in English. 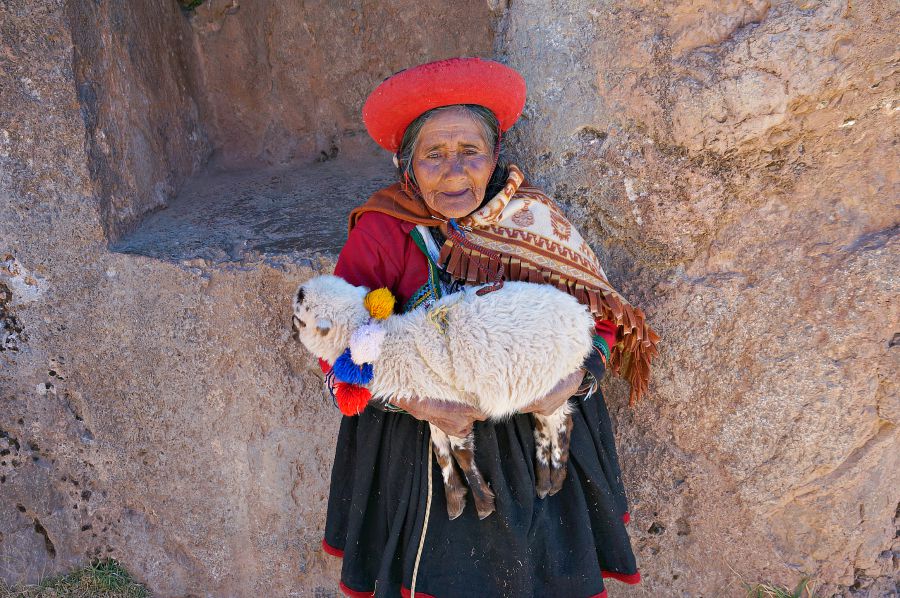 A short cab ride up the mountain at the foot of Cusco’s own redeemer statue, you’ll find ruins that are some of the best examples of the ingenuity of the ancient “Inca” civilization. 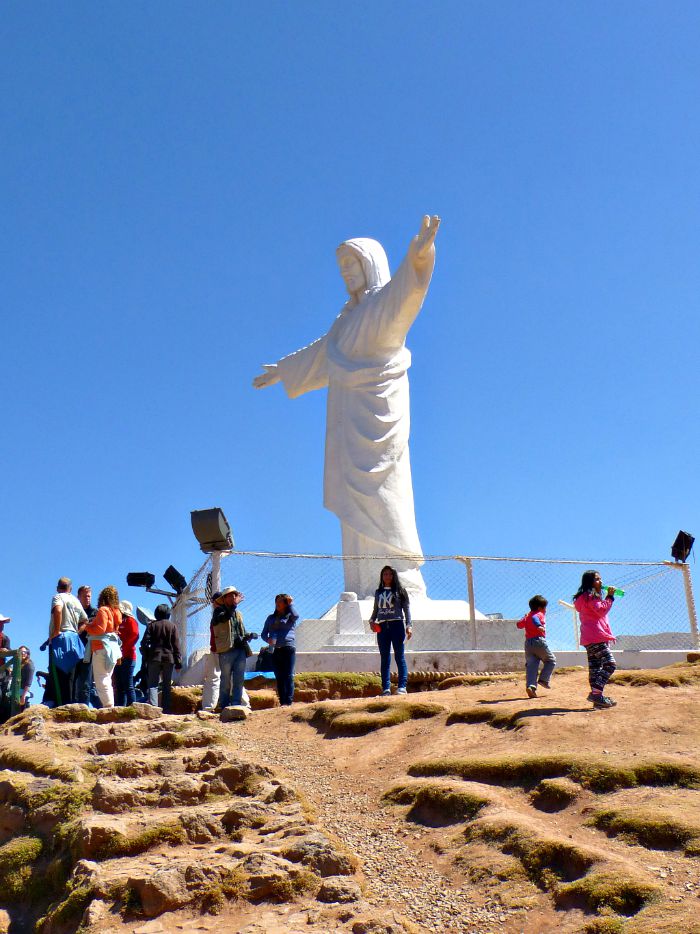 Here you will find a small cave system complete with altars. It is hypothesized that the caves were used to preserve and mummify bodies. Moving the dead from the heat outside to the cool caves in the evening perfectly preserved the bodies, for reasons still unknown. It is thought that some preserved bodies of children, sometimes found high in the mountains, were precocious children who were ritually starved in order to achieve god status in the next life. Since there were is not written documentation, the goals and beliefs of the people remain unknown. 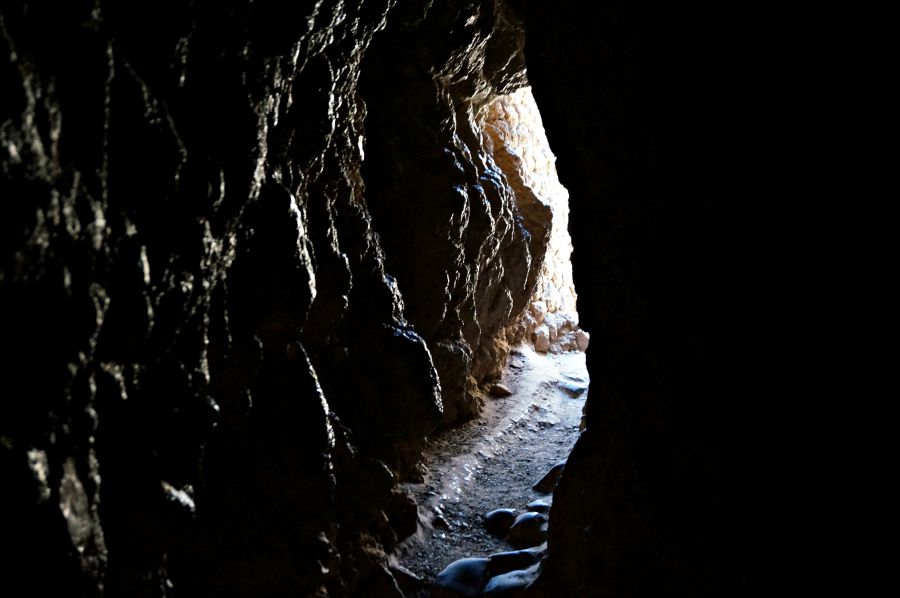 Cave above the city of Cusco

Moving closer to the center of the ruins you can find a series of areas and possibly natural slides that could have served as pools and natural playgrounds for the population that worked feverishly to make the stone buildings by hand. 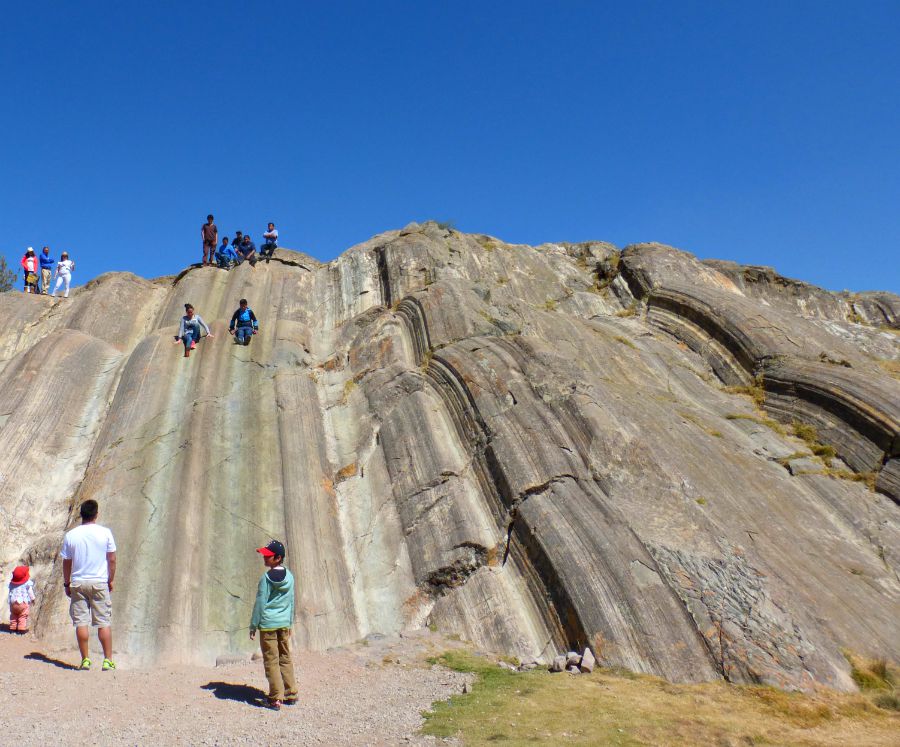 Some of the impressive stones used to make the foundation are over 2000 pounds. They were moved by teams using round stones or tree trunks and carved smooth to fit together like a jigsaw puzzle using tools made of dense black stones. There are some who continue to believe that the work is so astonishing that the only way it could have been accomplished is by the work of extraterrestrial intervention. But this notion is insulting to others who believe in the power of their ancestors, whose work remains standing while structures built long after have been destroyed by earthquakes. 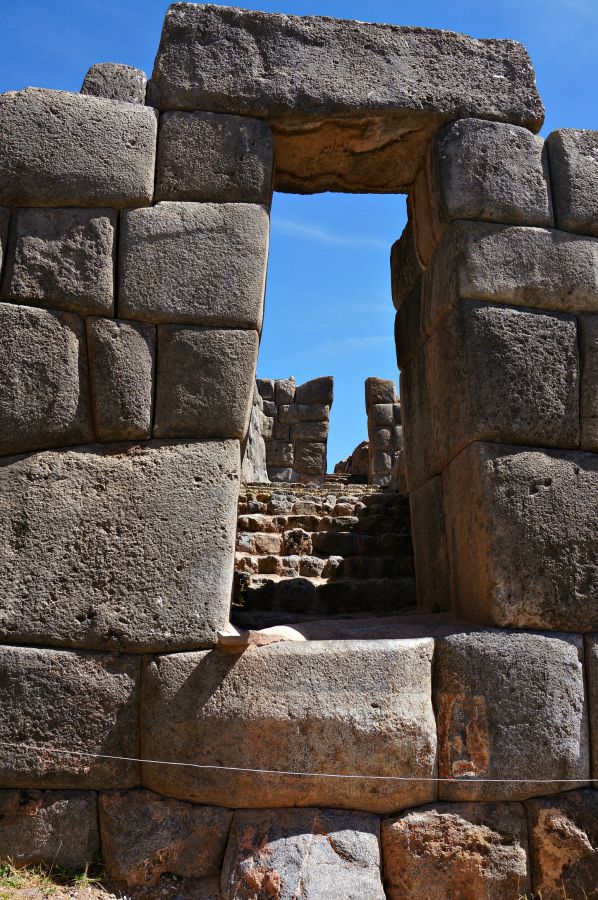 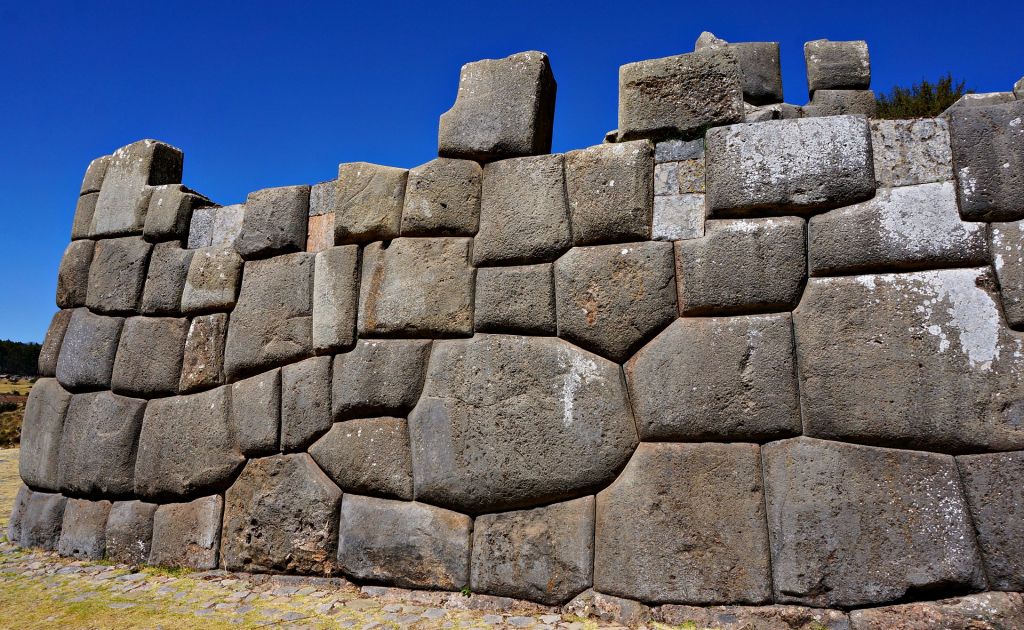 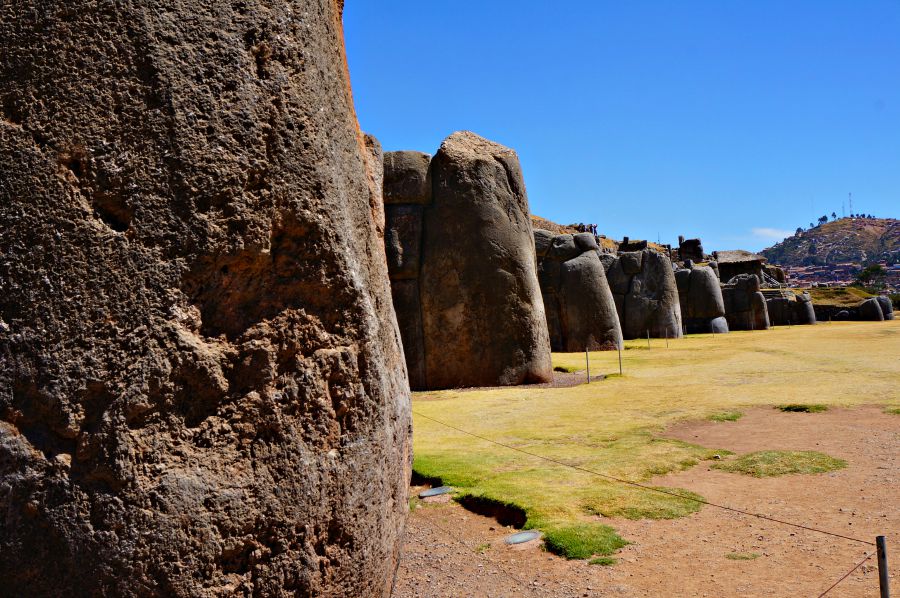 The building at Machu picchu is also impressive, but lacks the sheer size and smoothness of the stones in Sacsayhuaman. Current theories are that Cusco, which translates to bellybutton, or center, was the true center of the Inca Empire. Machu Picchu may have been a religious mountain retreat. But in the end, all of this remains a mystery. In either case, a visit to the area is a treat for the imagination and an inspiring experience, pondering how much can be accomplished given the knowledge, will and spirit. Children of the sun – sounds about right.

A special thank you to Cusco Urban Adventures for taking us on this amazing tour of Cusco. I have only scratched the surface compared to all of the information they offered during this tour, which really brought Cusco to life for us. Our opinions remain our own.

Up Down and Around Lima Peru

How to Party Like A Local in Lima Peru 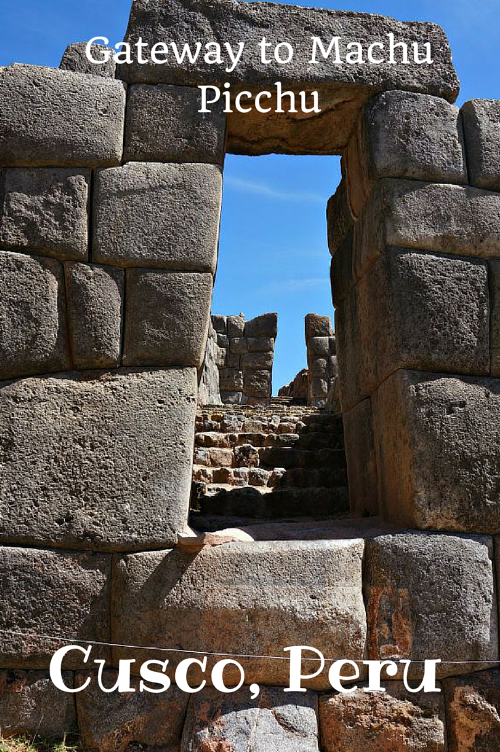 I absolutely loved Cusco, your post brought back lots of happy memories!

Lyndsay | Fizzy Peaches Travel and Lifestyle Blog p.s - Thanks for pinning on the ".Bloggers Unite." Pinterest board!

[…] impressive sites that you will see along the way, in addition toÂ Cusco’sÂ much less crowded Sacsayhuaman. The two thousand pound stones that are tightly joined together so much so that you can’t fit […]

In the back is the The Cathedral of Santo Domingo. Since photography isnâ€™t allowed inside, set aside a few hours to soak it all in. The interior is a stunning tribute to Cusco Baroque art, steeped in works of gold and silver from ceiling to floor.

Yes, there are some amazing cathedrals in Cusco as well!

Well, I never really wanted to visit Cusco, maybe only take a look at the colonial part of it, but your post shows that eventually I should change my mindâ€¦ ;) I will bear it in mind when I go there! :)

Thanks for this inspirational post! Certainly you have just put Cusco on our list (Machu Picchu was long there already :) )