If you have never heard of Georgia, formally known as the Republic of Georgia, you aren’t alone. Similarly, if you have no idea where it is, and why you should be interested in the food in this place, then you are in for a treat.

Lesser discovered places are some of the best to visit.

Particularly those that have the trifecta of beautiful scenery, welcoming locals and a food culture that will leave you desperate to return.

As a matter of fact, all of those reasons (and a few more) are why quite a few expats we met confessed that they came here for a visit and decided to never leave.

If you are willing to risk the same thing happening to you, continue reading (at your own risk).

The (Former) Republic of Georgia

Georgia is nestled between Russia, Armenia, Turkey, and the Black Sea. 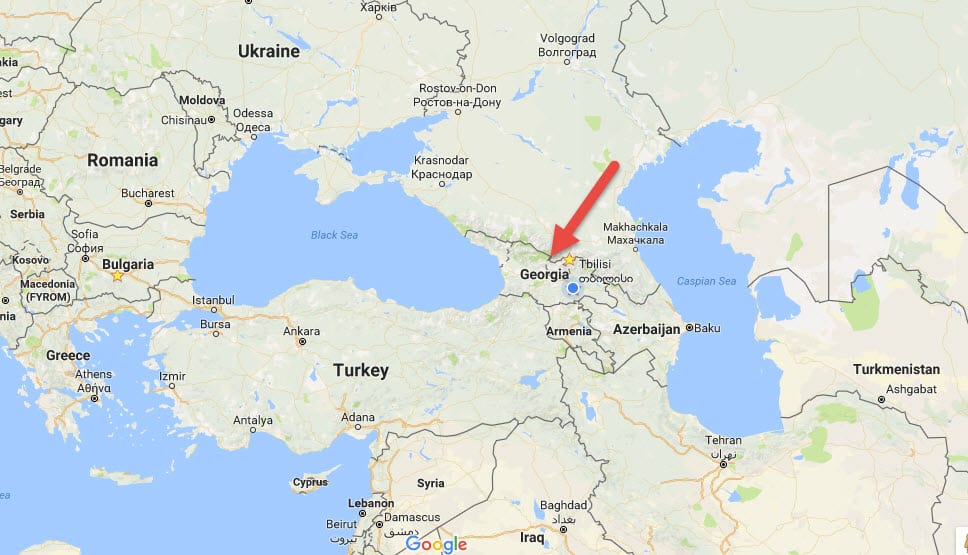 They gained their independence and re-established their borders in 1991 following the collapse of the Soviet Union, at which time they dropped the “Republic of” and are know simply as “Georgia”.

We based our visit here in the city of Tbilisi, which is Georgia’s capital.

Life seems to move a little more slowly here. Restaurants stay open late, and you can even find many that are open 24 hours a day, along with accompanying wine shops – both will deliver. That gives you a small idea of the priorities here.

Georgia is also known as the birth place of wine, which they have been producing, using their traditional methods, for over 8000 years. Let that sink in for a minute.

Georgian cuisine cannot be described in any terms as light, fusion, or trendy. It is traditional peasant food. Full of bread, butter, stewed meats and cheese, along with a side of more cheese.

The food is meant to be shared, and you may find that many of the people you meet will spontaneously invite you to share a meal in their home. It’s that kind of place.

One of the first things we decided to do when we arrived was to track down a cooking class.

If you follow our blog, you know that this is where we typically find the best restaurant recommendations and also get one of the best experiences of our trips.

Plus, knowing how to make a traditional Georgian feast and share it with our friends and family seemed very, well, Georgian.

We tracked down a class with a company called “Taste Georgia”, founded by — you guessed it, a visitor who became enamored with Georgia’s food and wine.

The school is actually nestled within a culinary institute. Students occasionally popped in or provided us with demonstrations (under the watchful eye of their instructors).

Our main instructor was a Georgian woman who didn’t speak a word of English (which isn’t uncommon, and understandable given that the area was under Soviet rule 30 years ago).

Most of the youth are now taught English in school, so it isn’t difficult to get along in restaurants, or luckily for us, in the class since an interpreter was provided. 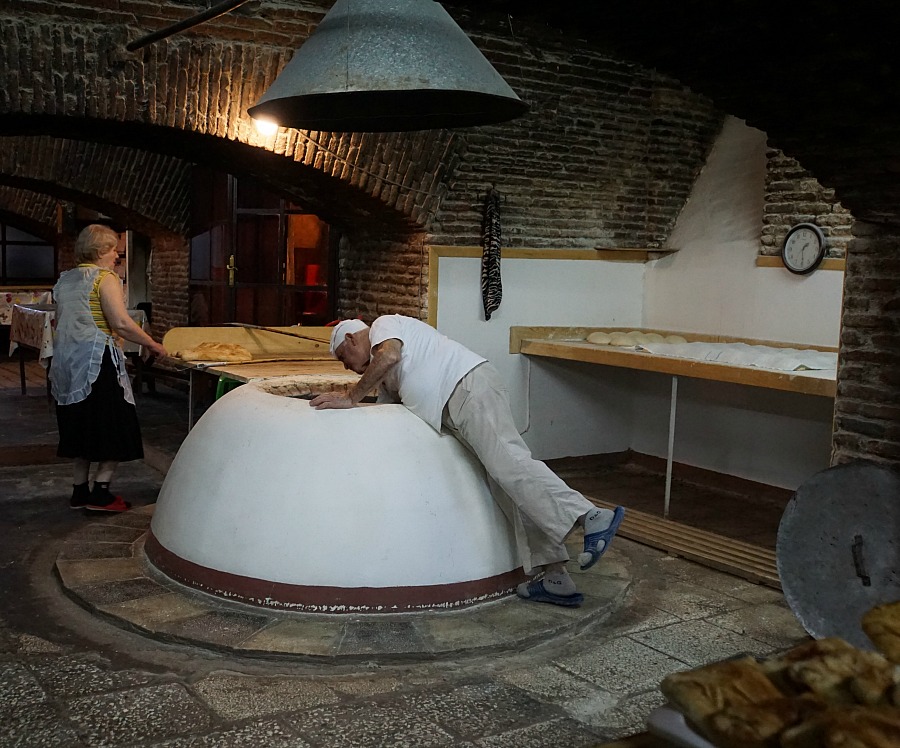 Walking around in our neighborhood in Georgia, I am convinced that I am gaining weight just smelling the aroma of baked bread.

There is a bakery on almost every block. Watching it being made is large open clay ovens is a treat. But the favorite breads for Georgians are made with cheese.

Adjarian and Imeruli khachapuri are some of the most popular. And much to our delight, we made both.

Both breads are made with Imeruli cheese (which we also find being sold out of small shops and even through windows on the street.

It is a brined cheese that is slightly sour, slightly spongy and melts into a gooey texture inside the bread that is curl your toes good. 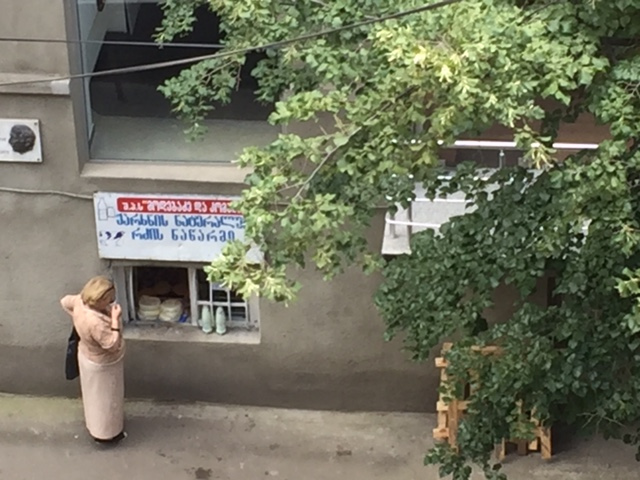 Fresh Cheese Being Sold at a Shop Across From Our Apartment in Tbilisi, Georgia

Our Georgian instructor first took us through the paces of making the dough.

She nodded approvingly when we got it right, and provided a doubtful look when she wasn’t so impressed with our kneading technique.

It really just took a little elbow grease and a willingness to get your hands dirty. To master the ability to make melty cheesy bread, the sacrifice of having dough covered hands was not a problem.

The second step was grating the cheese. A lot of cheese. In order to make this bread, the cheese to flour ratio is 1:1. Yes, you read that right.

We first made Adjarian Khachapuri, which involved rolling the dough into an oblong shape, adding cheese to the middle, then rolling the sides in, leaving the center open.

Here’s a video of our instructor demonstrating the technique for making Adjarian Khachapuri:

Egg wash is applied and then the bread is baked for 15 minutes. A raw egg is added on top and then the khachapuri is cooked for another 5 minutes. 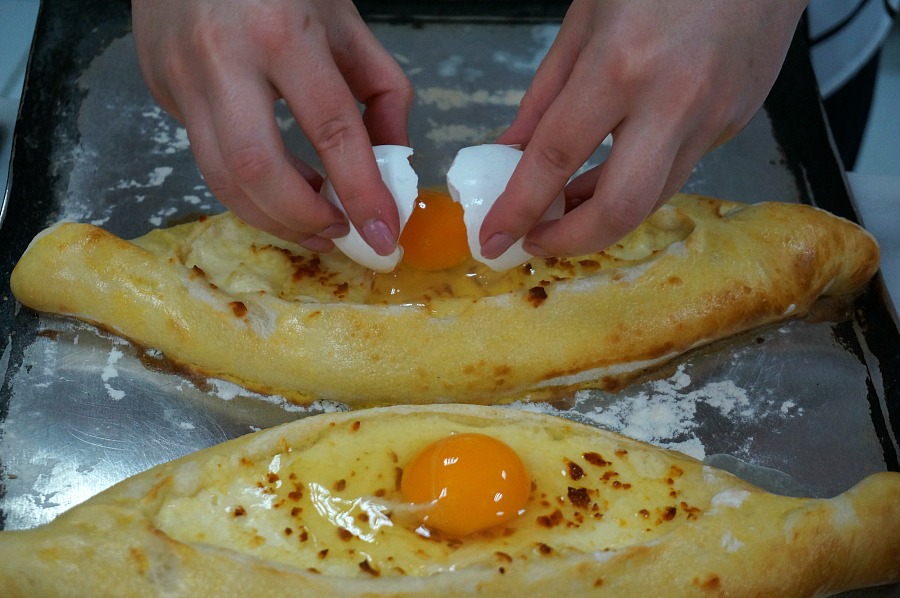 Once out of the oven a pat of butter is added, because, it’s Georgia.

The whole thing is put in the center of the table and is stirred, taking care to scoop some of the cheese under the sides to mix in with the center cheese and bread.

Then, it just a matter of tearing off the bread in chunks and dipping into the egg/cheese/butter mixture. 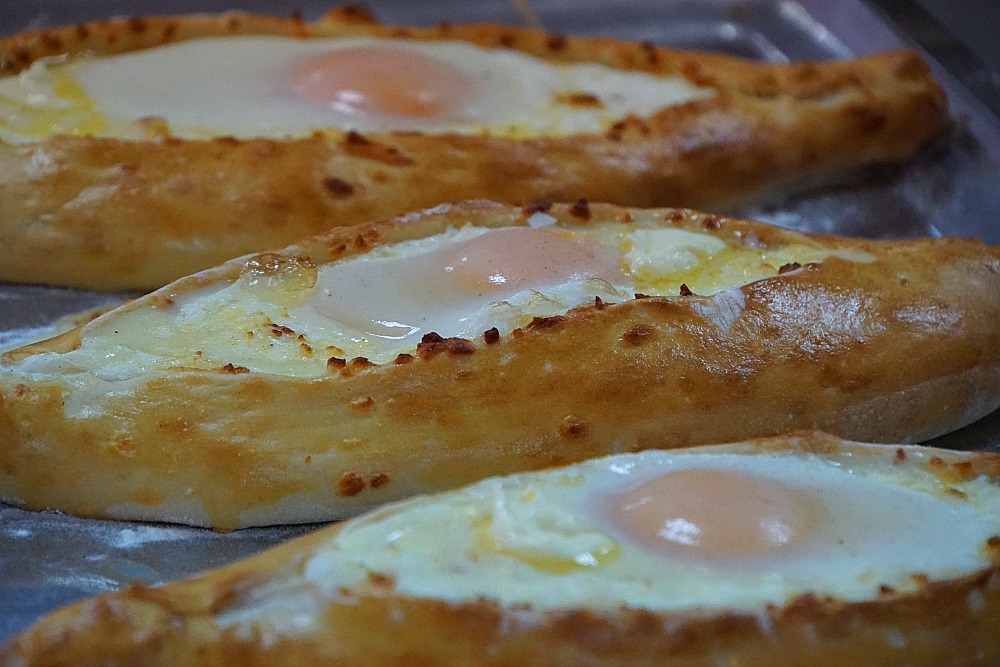 We devoured this greedily as our instructor showed us two more breads. Imeruli Khachapuri, which involved rolling the dough into a circle, filling it with cheese and then closing it like a dumpling.

The round is then rolled back into a disc shape and baked. Butter is added to the top when it comes out of the oven. If you are so inclined, you can find a recipe for making Adjarian (or Ajarian) Khachapuri here.

Remember to pin or bookmark this post for later! 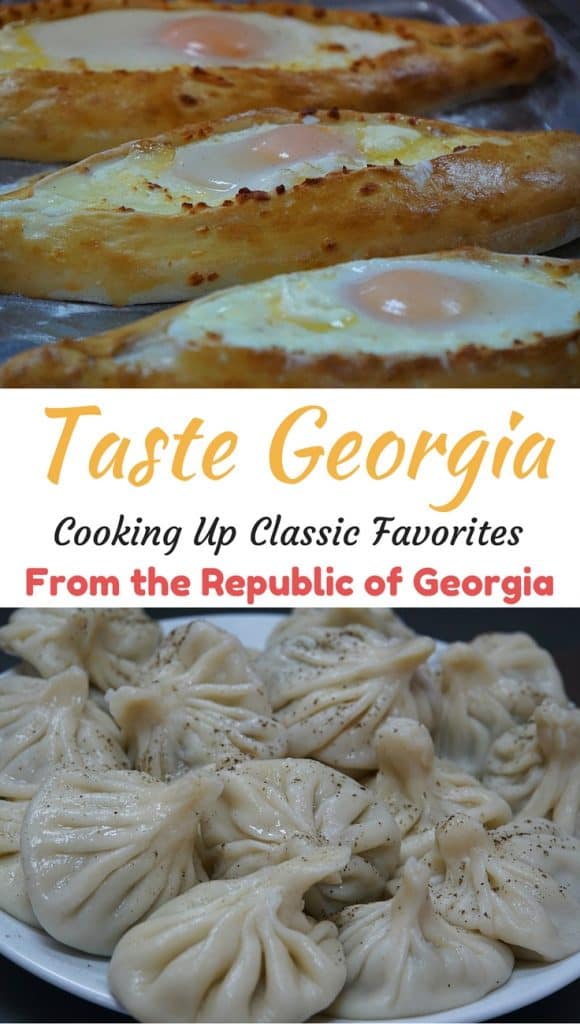 The next bread we tried, Mingrelian Khachapuri, followed all of the same steps, except an extra layer of cheese is added to the top before baking.

Then after it is removed from the oven (and you know what happens here) it is slathered with butter. This was my personal favorite (because more cheese is always better than less). 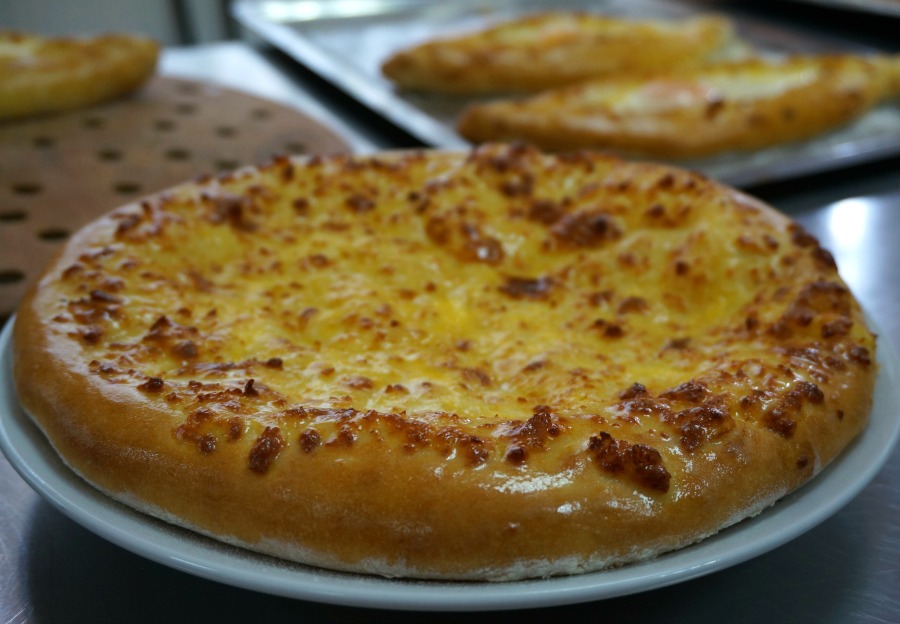 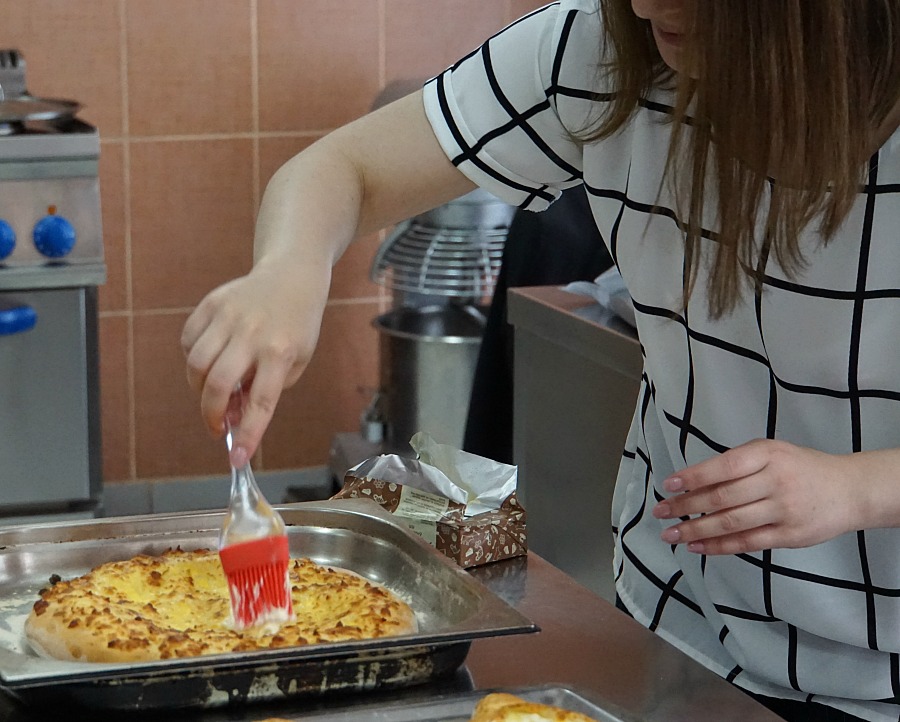 Here’s a video demonstration of the step for rolling out and stuffing the dough to make either Imeretian or Mingrelian Khachapuri.

Next we tried our hands at making another Georgian specialty, Khinkali, or Georgian stuffed dumplings. We tried these in restaurants before the class and saw large groups getting platter after platter delivered.

In our class we made beef and pork stuffed khinkali.

The dumpling purse is supposed to melt into a plump pasta pouch with a meatball and steamy broth inside.

The broth is so important that our instructor decided a little more B.U.T.T.E.R was needed to be added to the meat filling to make sure it had enough fat and flavor.

Culinary students came into the class to demonstrate how to properly make and roll out the dense dough.

We had to laugh when the first batch made by one student was rejected by our instructor, who required the young cook to start over.

Unless the dough is the correct consistency, the entire thing could come apart when boiled. 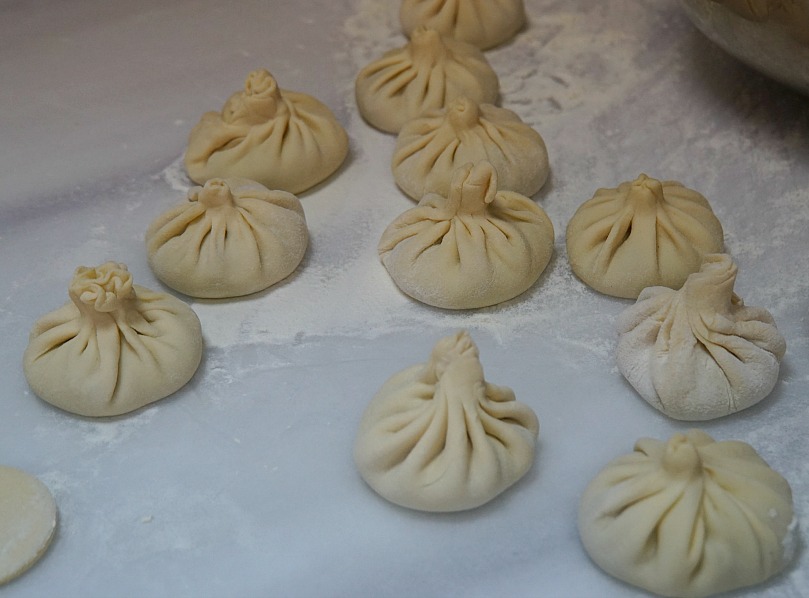 Here’s a quick video demonstrating how its done! You can find a recipe to make Khinkali at home here.

We helped stuff the pasta rounds, pleating them inexpertly at the top to form a dimple. We made enough (with the help of the students) that passed muster in order to be added to a pot of boiling water for cooking.

How to Eat Khinkali

We told our instructors that we had seen people putting a fork in the dumpling and eating it upside-down.

This evoked shaking heads and frowns all around. “This is not correct.”

The suggestion of cutting into the dumpling on a plate brought laughter. The correct way of eating khinkali, we were told, was to grasp the dumpling by the little handle on top.

Then a small bite is taken out of the side of the dumpling so that you can blow on the steaming center. Once it is cooled enough, bring the hole to your mouth and slurp out the broth.

After then the rest of the dumpling is devoured with the exception of the top handle, which is discarded. Practiced eaters can polish off a plate of 20 or so at a time, which I can’t even imagine. They are delicious, but not light! 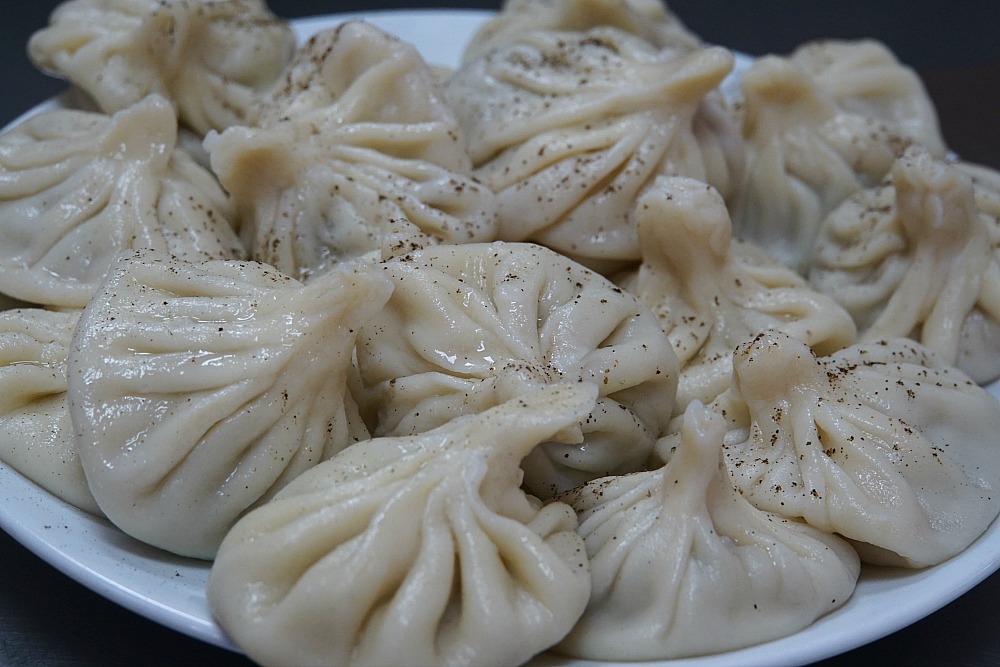 The dumpling is considered inedible once completely cooled. During longer party gatherings, occasionally dumplings are revived by being sent back into the kitchen for a bath in the deep fryer. Mmmmmmm!

Did I forget that we also made a vegetable dish? A traditional poached sweet bell pepper stuffed with a sauce of walnuts, on onions, fresh cilantro and spices. It was quite delicious too. 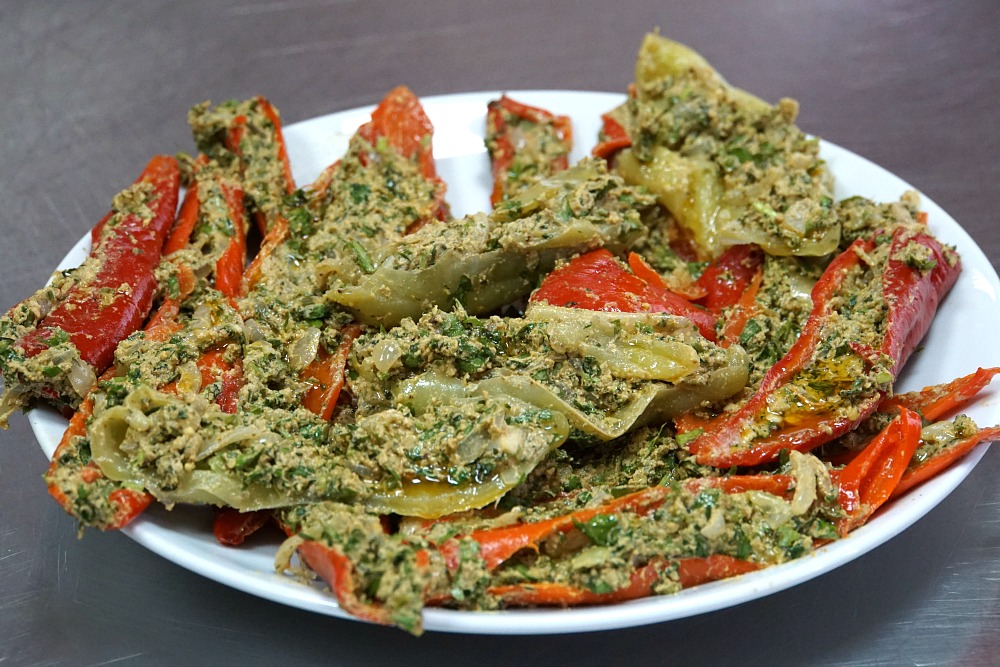 But when speaking of Georgian food, would anyone say, I came for the cheese, but I stayed for the salad? Probably not. My suggestion is to come and try it all.

Who knows, maybe you will decide, like so many before you, to put down roots, and stay. Why not?

When you do decide to visit Georgia, contact Taste Georgia to learn more about scheduling a class or a tour. Also, here’s a guide of unique and wonderful places to stay in Tbilisi to help plan your time here. Happy Travels! A special thank you to Sarah May Grunwald and Taste Georgia for hosting us for this fantastic class. Our opinions, as always, remain our own.