When we first arrived on the Island of Ambergis Caye, Belize we met a man who was lounging lazily by the pool.  He asked if it were our first trip to the Island.  When we admitted that it was, he said “It won’t be your last.”  Wise man.

The laid back vibe of the Island — everything that you’d expect from an Island that was voted #1 Island Destination on Trip Advisor during the week we were there.

Some of the best snorkeling/diving that we have found (we’ve been to Thailand and the Great Barrier Reef, for example).  We had frequent sightings of Rays from the beach.

We swam in close proximity to turtles, sharks and countless colorful fish during a snorkeling trip in the warm, shallow crystal clear water.  And were treated to an occasional rare glimpse of an eagle ray jumping out of the water.  Amazing.

Belize is considered one of the best destinations in Central America for adventure lovers, and after our visit, we readily agree!

We took a tour to view Mayan Ruins and were accompanied by roaring howler monkeys. Our tour guide told us that the sound was used to mimic the sounds of dinosaurs on the movie Jurassic Park. Click on the link below and have a listen.

Downside (unless you are sea creatures in need of a place to live/eat) is the abundance of sea grass making swimming directly from the beaches less appealing.

Crafty patrons of the Palapa Bar show the way to a popular solution. 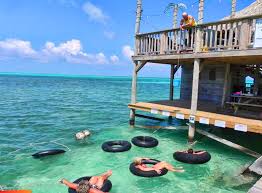 Ahhh, Belize, we will be back.

Love Island Vacations? You might enjoy this related article about the Islands of Thailand.