Aguachile verde is a traditional Mexican seafood dish. It is made with shrimp that are marinated (cooked) in chili peppers, lime juice, salt, cilantro, and mixed with slices of cucumber and onion.

The origin of aguachile lies in the state of Sinaloa, on the western coast of Mexico.

It was originally made with boiled water and small round pepper called chiltepines, which grow wild in the region. This preparation explains the name “aguachile” which translates as “pepper water”.

Aguachile is often thought of as Mexican ceviche. The major differences between traditional aguachile and ceviche is the marination time, the spiciness and the amount of liquid.

Aguachiles tend to have more juice than other ceviches.

With ceviche, the seafood marinates in lime juice for at least 15-20 minutes, resulting in opaque flesh. Traditionally, aguachiles are tossed in the lime and pretty much served right away – more of a sashimi presentation.

That said, you can adjust the amount of time the seafood sits in the acid to your own tastes. I prefer firmer shrimp, so I typically marinate until the shrimp no longer has a grey color and instead is pink/orange with opaque white flesh.

I also use a handheld juicer to simplify the process of extracting the lime juice.

Aguachile is usually much spicier than ceviche. We use jalapeños in both the verde sauce and as garnish.

You can also use serrano chiles as well. The flavors of the two peppers are very similar, it’s only the spiciness that’s different.  Serrano peppers are 3-4 times hotter than jalapeños. 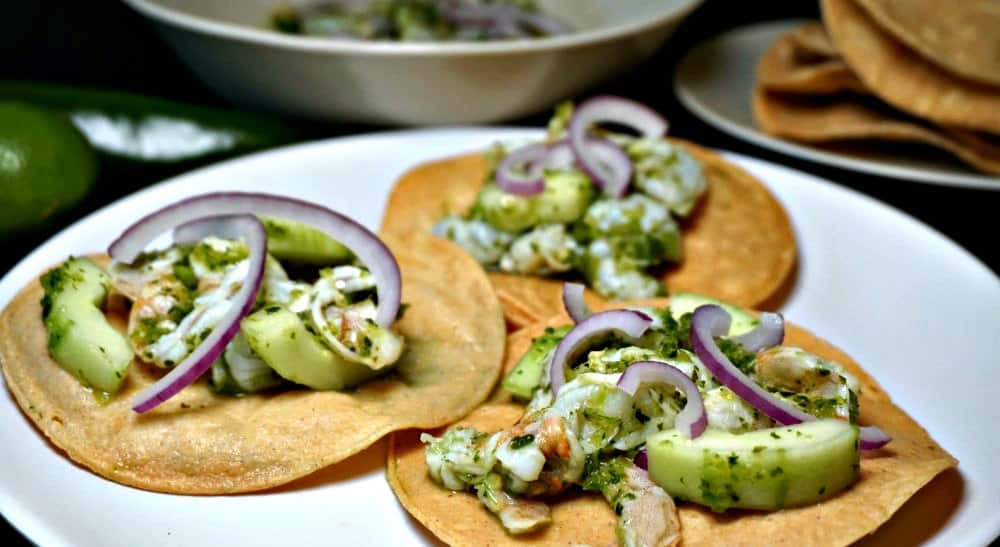 Our preparation is for aguachile verde, the “green” version, made with green chiles such as serranos or jalapeños. There are other variations of aguachile, as well.

Aguachile rojo is a red version made with chile de arbol and worcestershire sauce, and occasionally clamato. Aguachile negro is “black” preparation which uses soy sauce and chipotles in adobo sauce.

Finally, our aguachile verde can be switched up by using different seafood. Cubed tuna, salmon, or a white fish such as halibut, red snapper, or cod make an excellent fish version.

Scallops and octopus, sliced thin like sashimi, are great options as well. 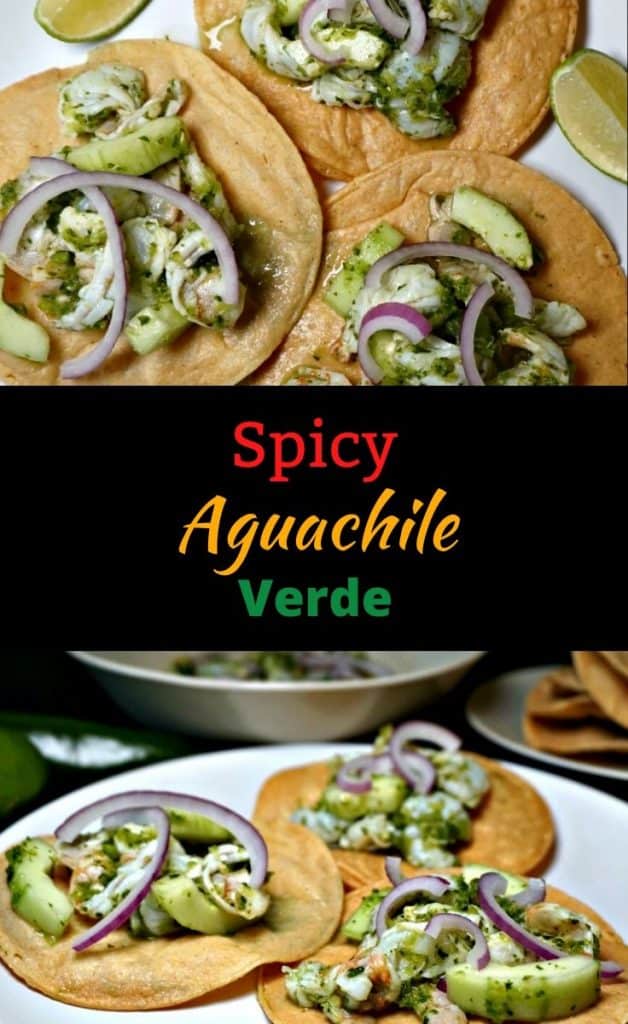 A moment about fresh seafood. Like all ceviches or sashimi, you want to use the freshest seafood possible for this dish. Even though the marination “cooks” the fish through a chemical process, you won’t get the best results with frozen seafood.

Check out some of our other great Mexican recipes: * Stir shrimp periodically to ensure that all shrimp have contact with the acidic sauce.