Peruvian Cooking Class in Cusco Peru. Here’s what to expect. Today I had my first taste of guinea pig, and almost set myself on fire.

The guinea pig, or “cuy” as it is known in Peru, wasn’t a surprise. I knew I was likely going to be presented with a taste after reading about the cooking class we were taking.

Lots of local delicacies in the form of amuse-bouches were going to be served, like one little surprise after another. And since cuy is a favorite food in Peru, I was prepared for opportunity to see what my first childhood pet tasted like. And I did.

There were other firsts, as well: loin of alpaca, among many, many other things. This was a four-hour cooking class like no other I had ever experienced.

This won’t surprise the chef, who knows that the food in Peru is something special, as she told us during the class, unapologetically: that’s just the way it is.

Our host Chef Ebelin made it her mission to explain why the food in Peru is so good, and to give us several tastes (paired with some fine local pisco drinks) to prove her point.

She explained that Peru has 85 microclimates. From the foggy coast of Lima, to the warm amazon jungle and the high cool rich soil on the top of the Andes, Peru has it all.

As an example of this diversity, the country boasts having over 3000 different varieties of potatoes, each with a unique characteristic and different food application.

After introductions, we were brought into a store room and showed several Peruvian varieties of potato, corn and other products.

Don’t forget to Pin or Bookmark the post for later!

Chef Ebelin looked at the sample of American grown corn kernels in comparison to the larger choclo version, shaking her head sadly.

She gestured at the small kernels and said, “We call that chicken feed”. Not all of us are so lucky as to have the diversity of food that the Peruvians enjoy! 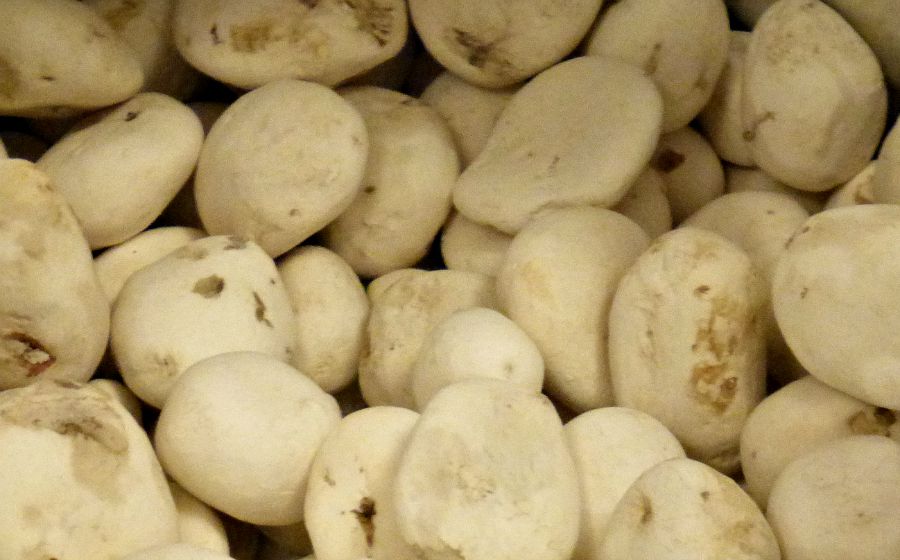 The above pictured dried potatoes were something we had never seen before. They demonstrate the innovations in food preparation in Peru. It is said that these retain their nutritional value for over ten years.

Peruvians value food so much that our chef quipped that a woman is more valued as a potential wife, not for her beauty, but her ability to skin a knobby potato in one long peel.

One of 5000 varieties of potato in Peru

The diversity of Peru isn’t just in varieties of potatoes and corn. We were treated to a sampling of native fruits (about ten in all), ranging from sweet to tart. 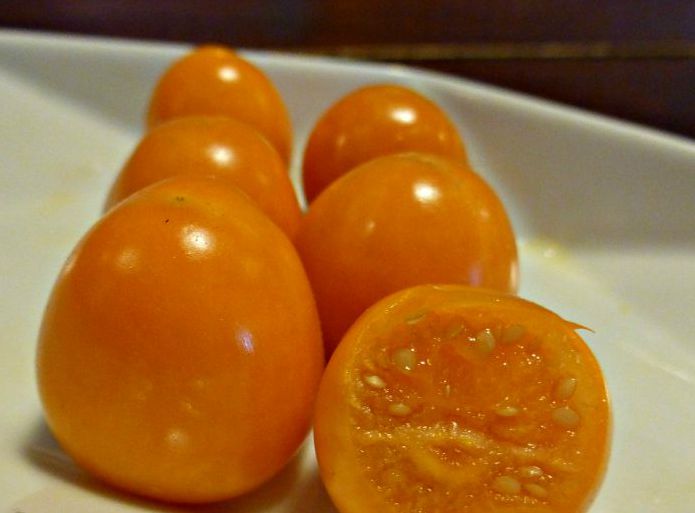 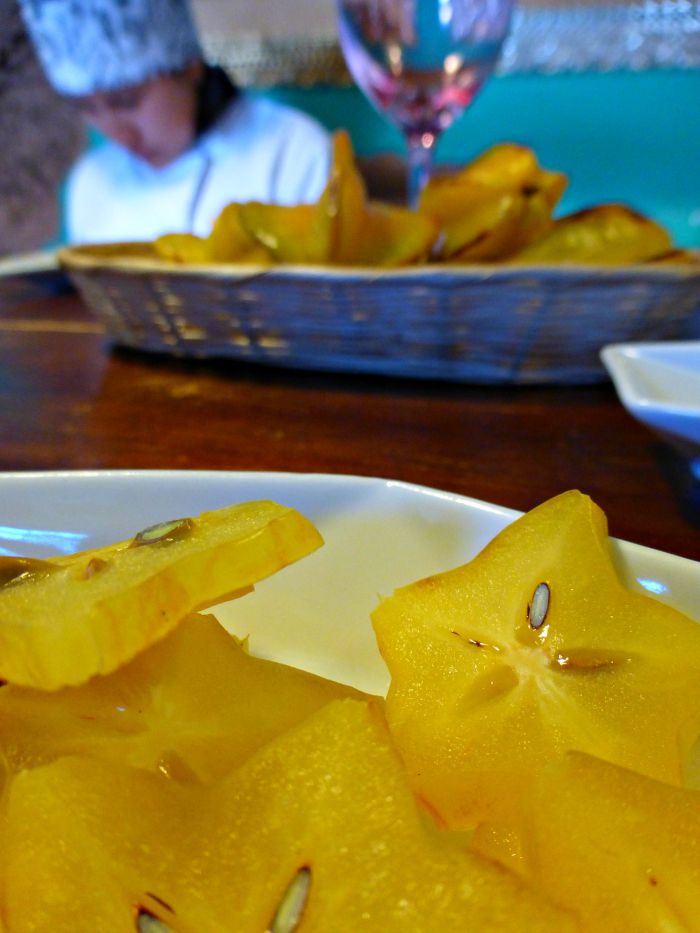 Not grown here, but star fruit is abundantly available in Peru

All through the class, delicious little bites of heaven arrived, delivered from one of the two restaurants next door.

One person even complained that by the time it was ready to cook the main course, she was already full.

I had no such complaints – when the food is that good, there is always room for a little more.

Here are a few examples of the dishes that continued to roll in as we learned about the culinary history and flavors of Peru.

This small taste of cuy (sorry childhood friend) melted in my mouth. If they told me it was pork, I would have believed them. 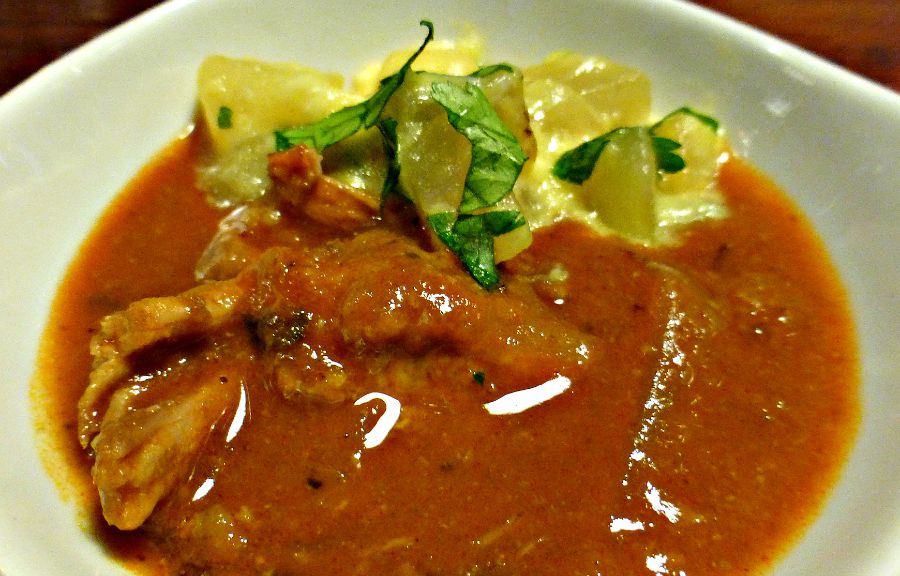 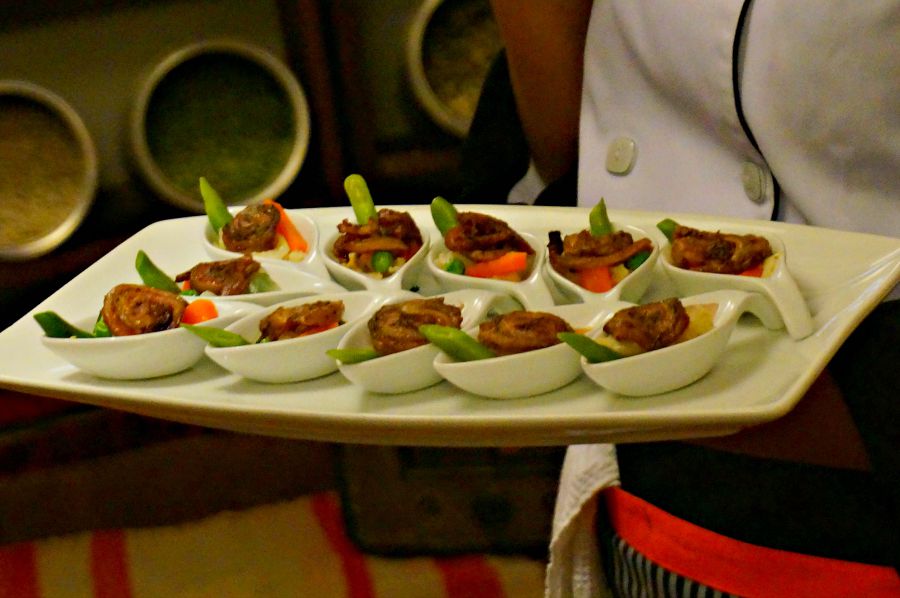 Causa – an upscale version of this classic Peruvian potato dish with grilled fish and a sauce made with Rocoto chilis: 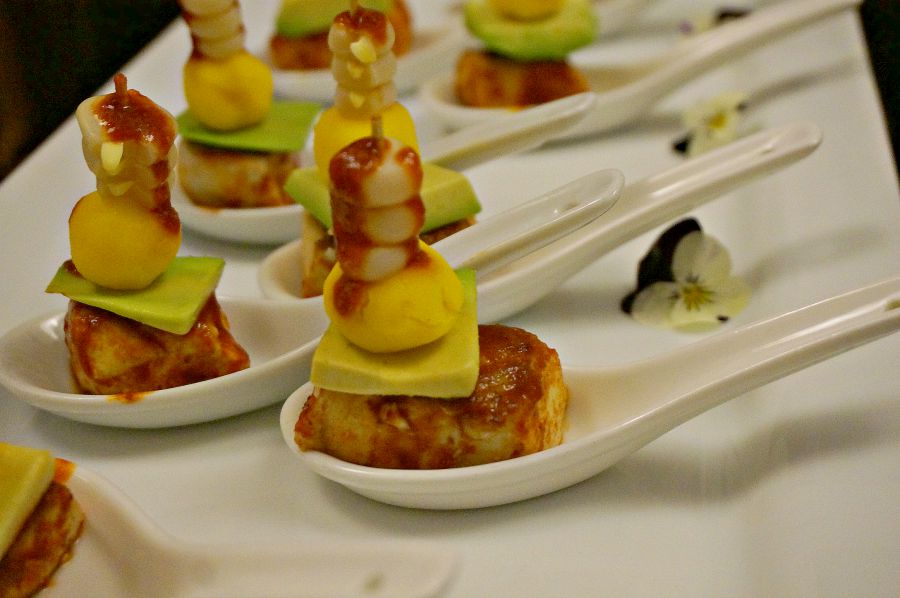 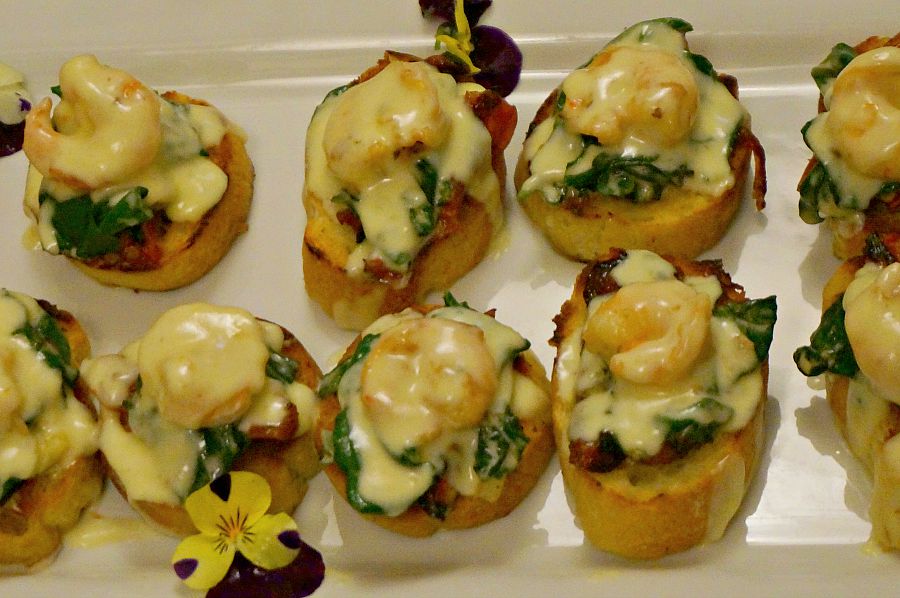 One thing that Peru isn’t known for, at least yet, is their wine production.

While that is beginning to change, the favored drink in Peru is a distilled white brandy (made from grapes) called pisco. It was first created by frustrated Spaniards who were unable to produce good wine in Peru.

What they couldn’t produce in quality lead them to favor potency.

They distilled the unsavory wine and came up with pisco. For our class we first tasted a few varieties of straight pisco and then made the classic Pisco Sour (made with limes, sugar, and egg white and a dash of bitters).

We were also invited to develop our own concoction using a combination of infused piscos made in-house. There were maybe 10 different types with flavors ranging from lemongrass to orange to coca. 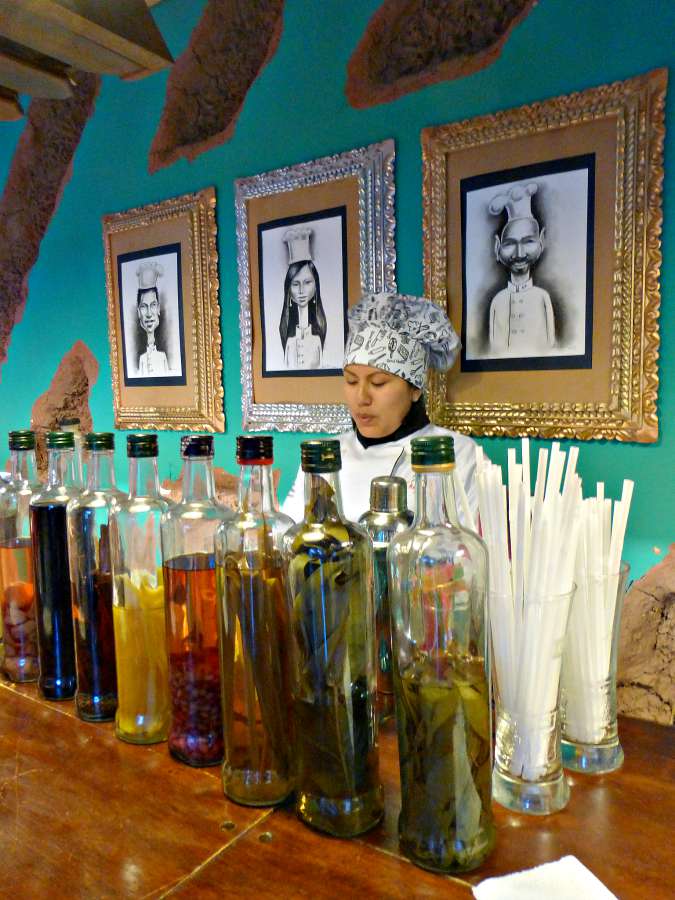 Chef Ebelin mixing it up with house-infused Pisco

When we were done with our pisco tasting (and with drink #2 in hand), Chef announced that it was time to cook.

Our group of tipsy novice chefs made our way to the kitchen where we were about to chop up the ingredients for our own ceviche and learn how to flambé Alpaca. What could go wrong there? 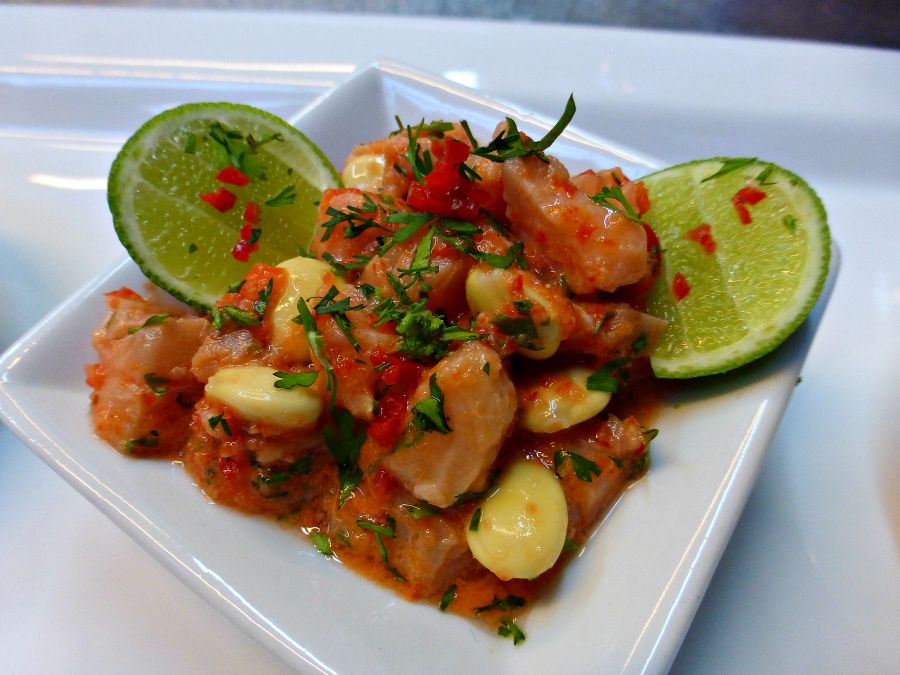 The drama of the flambé was a highlight of the evening (except for the person next to me, who ended up tossing the entire contents of her ignited alpaca dish onto the floor next to me).

In the end, no harm done. 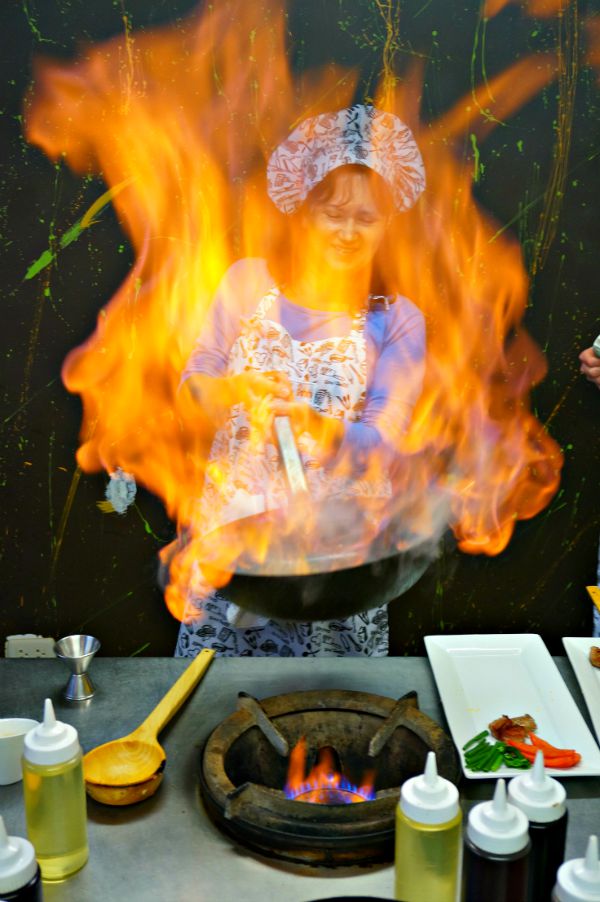 Has anyone seen my eyebrows?

I’ll have to admit, unfortunately for the alpaca, the Saltado (a Peruvian/Asian Fusion dish that is a favorite in the area) was tender and delicious. 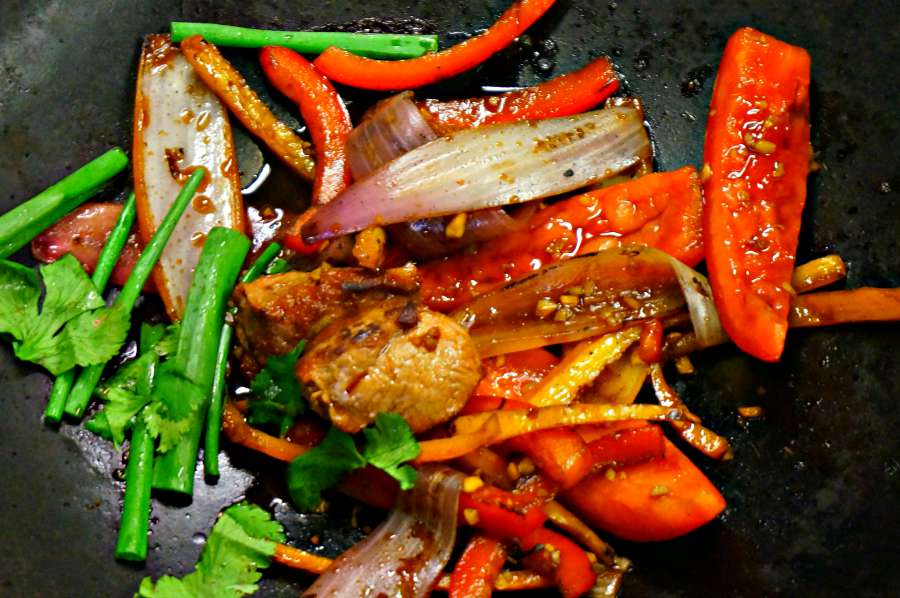 One of the BEST things to do in Cusco

I can’t really call the four-hour experience a cooking class, as it was so much more.

I left with a deep appreciation for Peruvian cuisine and left with no doubt that they had every right to claim themselves a world-class foodie destination.

Chef Ebelin – you were so right (but she already knew that).

Related stories you might enjoy about the flavors and sights in Cusco, Peru Things to do in Cusco

we went out for dinner one night and the resturant served a 7 course meal Never in my life have I been presented with so many courses!! But it was all so good, and I was really impressed with the variety â€“ I can see why Peruvians are so proud of their cuisine. Seriously, a foodies paradise!

Great post! We only hear about the historical sights of Peru, it is great to have a food post as well!

If you go you should give the class a try - it was a blast!

This has just made me soooo hungry and eager to go to Peru! Thanks for that ;)

This post made me so hungry! I had no idea Peru has such a variety of microclimates. 5000 types of potato, that's nuts! When we go to Peru I would love to take this class. Bookmarking this page!

Fab post, and I totally agree with you - when the food is that good, there's always room for more! I remember my time in Peru fondly - we went out for dinner one night and the resturant served a 7 course meal :D Never in my life have I been presented with so many courses!! But it was all so good, and I was really impressed with the variety - I can see why Peruvians are so proud of their cuisine. Seriously, a foodies paradise!

Thanks for bringing back such fond memories, I'm glad you enjoyed your time :)